A spike in the workload has again slowed down much of my blogging progress (as well as an apparent server problem with Blogger and Google on Monday night), but I still have acres of fertile fields ahead of me left to sew, so even if the monthly output lags, I have every intention of committing myself to the new material. In the meantime, it has been awhile since I’ve added a real photo montage—I didn’t get one in last month—so the blog is due for one, especially since this entry features a topic that I feel I might have exhausted: handicapped access in urban settings. I don’t have much new to say, but this particular design predicament (an elevated structure) and its ensuing solution are interesting enough to merit a discussion. Thus, I will provide minimal “captions” to the photos below, taken close to my current home, from a McDonald’s near downtown Biloxi, Mississippi: 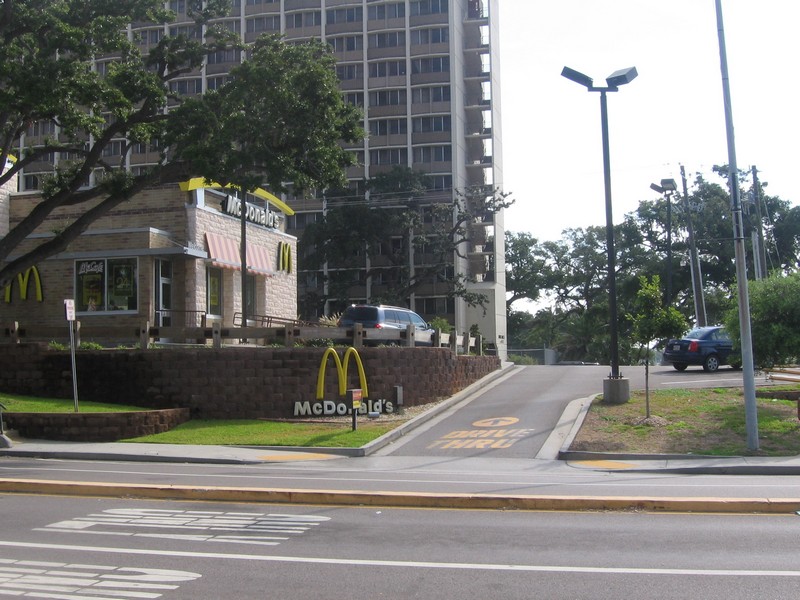 My apologies if some of the photos approve misty; my lens was apparently clouded over on a predictably humid morning. At any rate, the McDonald’s here on Beach Boulevard (US Highway 90) uses a sort of sandstone motif that seems to be a particularly popular design vernacular these days, giving clear indication that the structure post-dates Hurricane Katrina. 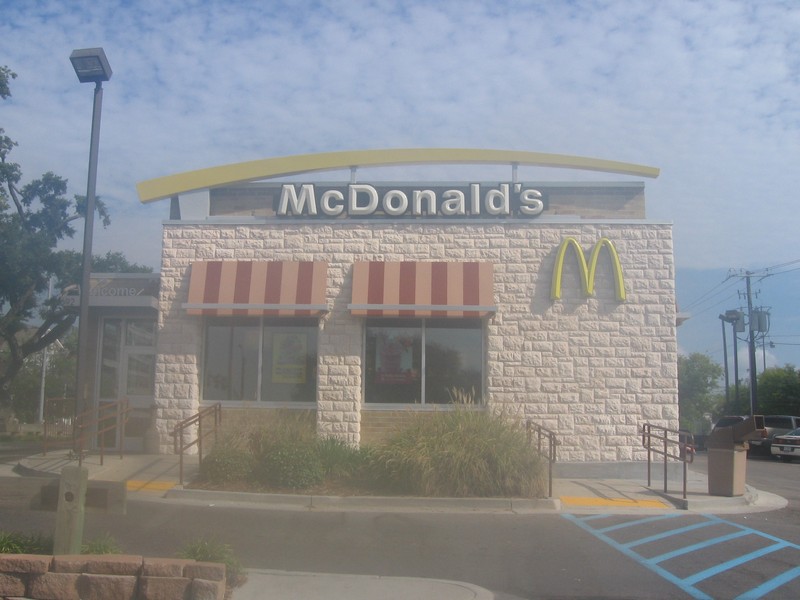 If that weren’t proof enough, the fact that it sits just a few hundred feet from the water should offer evidence to anyone familiar with the area that this is a new building. In Biloxi, virtually everything within a tenth of a mile of the shore was obliterated by Katrina’s storm surge. Just across US 90 from this McDonald’s is the completely refurbished Hard Rock Casino Hotel, and just beyond that is the Mississippi Sound. 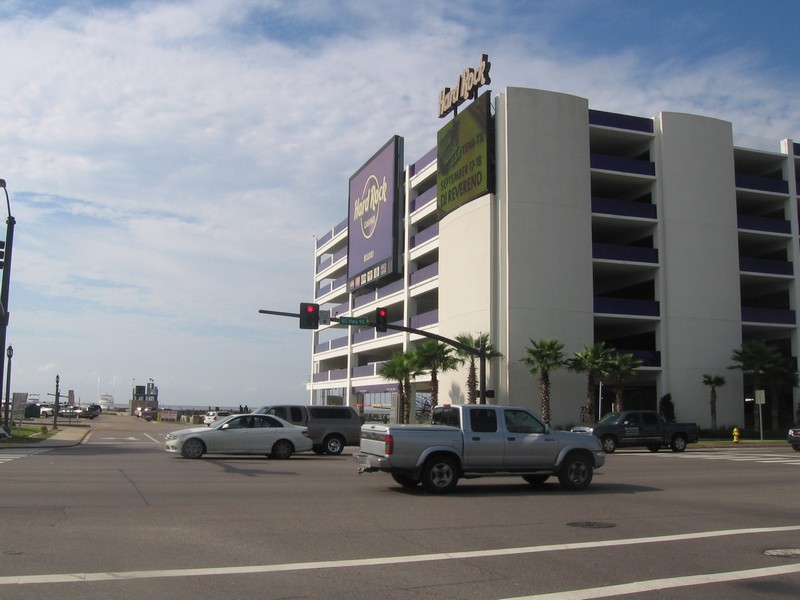 For a historically spread-out city that is redeveloping after the hurricane with abundant parking, this McDonald’s squeezes its thirty spaces into a relatively small parcel, as outlined in red below. 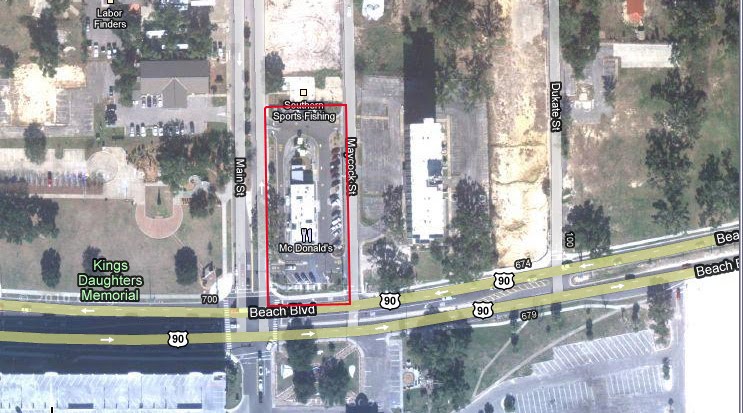 Thanks to a huge hotel just across the street (and the even more colossal Beau Rivage just next door to the west), this stretch of Highway 90 enjoys a high enough density of visitors that the McDonald’s across the street could very well expect some foot traffic, even in an area in which the building configurations otherwise do not attempt to accommodate pedestrians. As the photos indicate, the McDonald’s is also elevated several feet above street level. 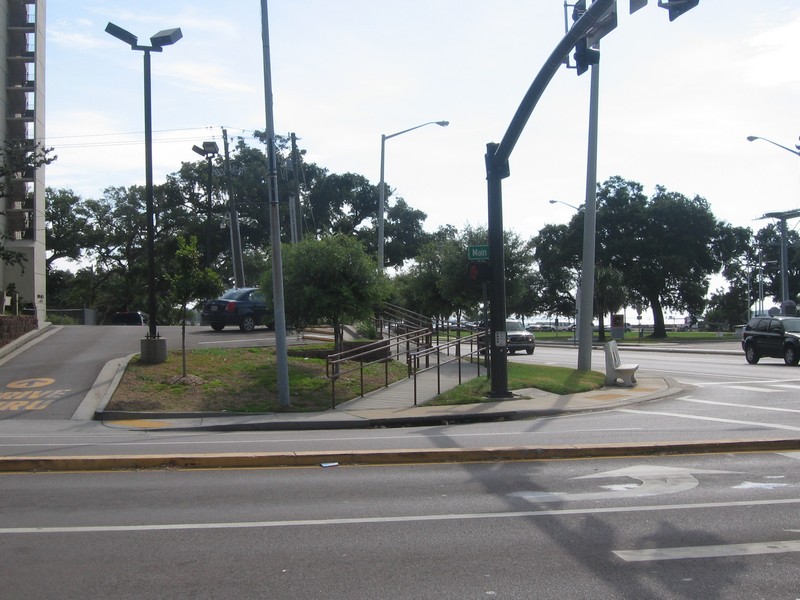 The ramp out front demonstrates a clear effort to provide wheelchair access. It runs from the sidewalk at the intersection— 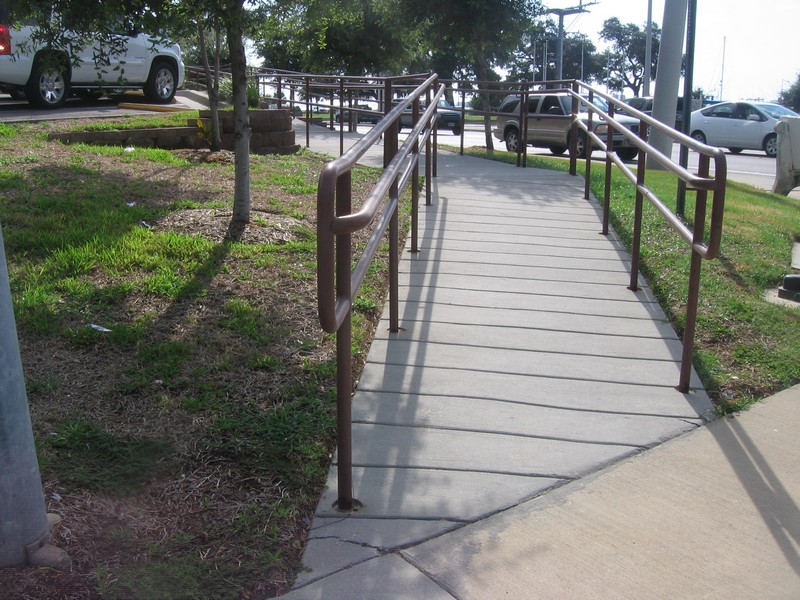 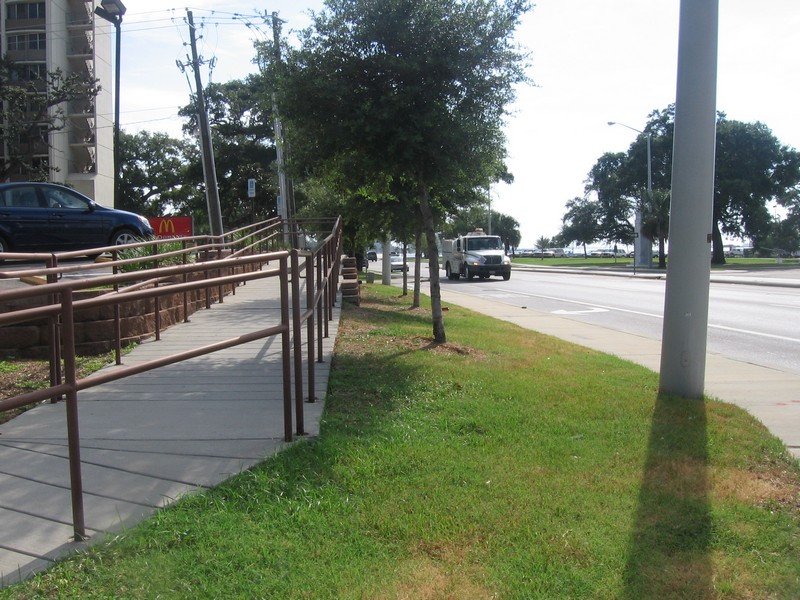 —up to the parking lot, which is also elevated. 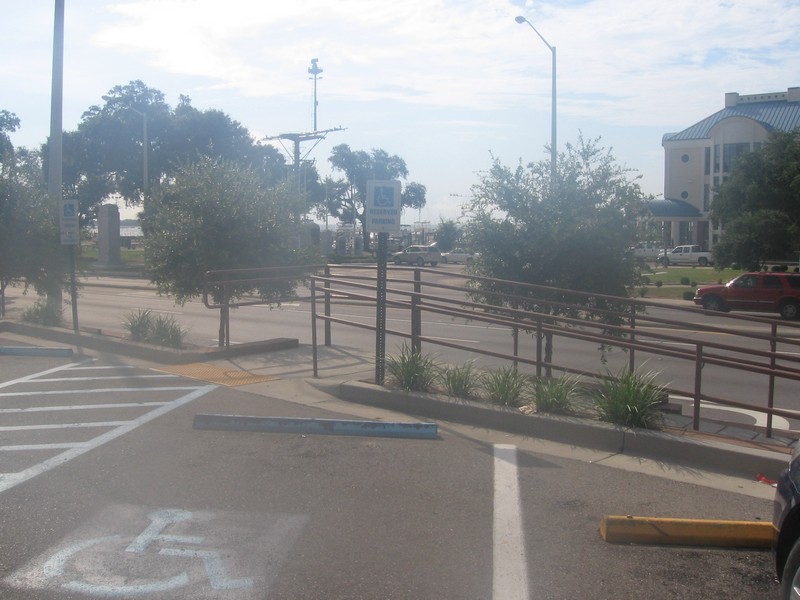 Yet, interestingly, the sidewalk parallel to the city street does not offer this same convenience. 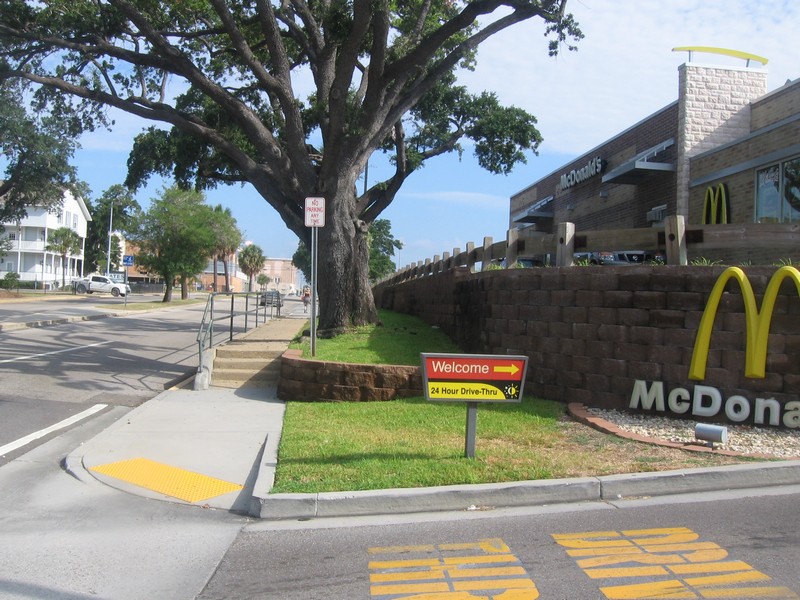 Pedestrians walking along Main Street toward downtown Biloxi will have to climb a few stairs, and then descend again after several feet. 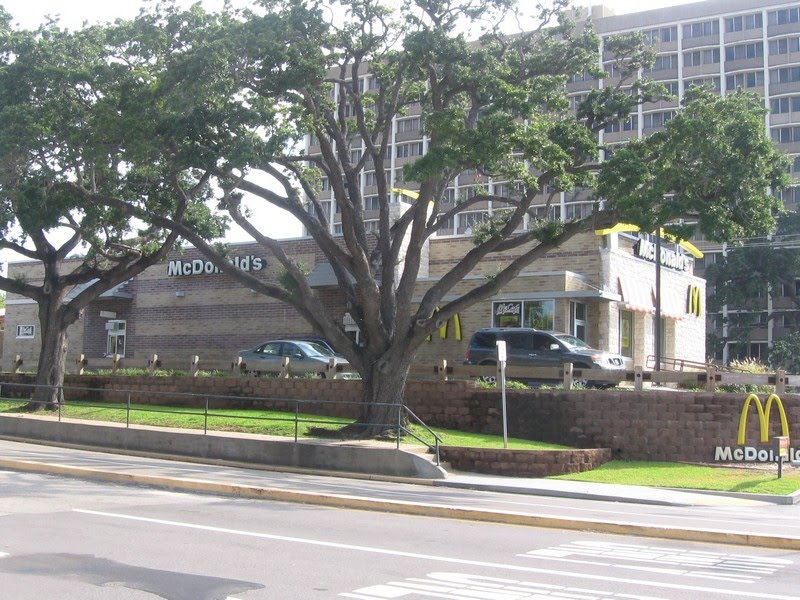 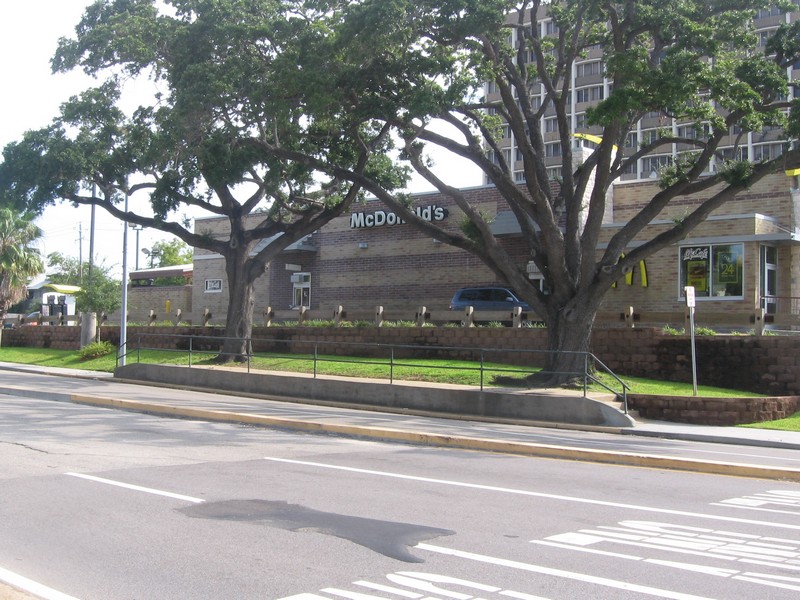 The last two photos capture the bizarre site preparation decisions that the developers made here, presumably in negotiation with the City in order to obtain the building permit. This parcel incorporates three different grades: one at the level of the street and most of the sidewalk; one for the terrace hosting two expansive live oak trees and the elevated portion of the sidewalk; and one for the McDonald’s building itself. The decision behind elevating the McDonald’s is obvious: regardless of whether this complies with FEMA or the National Flood Insurance Program’s Base Flood Elevation standards, any sensible franchiser working with this parcel would want to elevate to reduce the chances of flooding in the event of another storm surge. But it would appear that the original elevation decision took place long ago, at the grade where the two live oak trees stand, both which clearly pre-date Hurricane Katrina, and thus survived its powerful winds. The earth around those trees needs to remain elevated to accommodate their expansive root systems; bringing the sidewalk down to street level at this point could have threatened their stability.

The question is how much the local ordinances dictated this unusual decision. If the City of Biloxi has both a sidewalk ordinance (which it apparently does—Section 23-14-7 in the Land Development Ordinance) and a tree protection ordinance (Section 23-16-11) this parcel would pose a difficult means of reconciling the two codes. It’s highly possible that the sidewalk with stairs predates the new McDonald’s as well as Hurricane Katrina, though, judging from the pavement’s new appearance, chances are that some entity installed new concrete to coincide with the construction taking place. If Biloxi’s sidewalk ordinance mandates that all new construction requires a sidewalk at any perimeter that directly abuts the streets, then the developer installed this segment by law. But how did he or she circumvent the Americans with Disabilities Act by building a portion of sidewalk that is clearly non-compliant, especially after all the ADA-friendly ramps leading up to the elevate restaurant?

The two live oaks at a different grade quite possibly form the crux of an elaborate negotiation. Also, a wheelchair can avoid the stairs on the sidewalk with little difficulty: first by running up the ramp into the McDonald’s parking lot, then by circumscribing the building along the parking lot, and finally by taking the automobile exit ramp back around to the back of the structure, on the other side of the stairs to the sidewalk (to the left of the above photos). A seemingly mundane development that could take place anywhere manifests the collision of different well-intentioned policies, with results that accommodate the interests of both groups: those in wheelchairs and those seeking to save native tree growth. Though one could argue that both the trees’ root network and disabled persons are moderately inconvenienced by the resulting site plan, no one emerges a loser, demonstrating the potential for ingenuity in compromise.