The safety of objects.

The escalation of airport security after September 11th has unambiguously complicated air travel. Hardly a year has gone by since that tragic day without the introduction of a new major regulation, generally enforced by the Federal Aviation Authority (FAA). The use of small box-cutters to intimidate the passengers of the four hijacked airplanes prompted the FAA to expand its restrictions on knives—formerly permissible if the blades were less than four inches long—so that no blades of any sort were allowed. This new regulation became a mandate just a day after the attacks , and restrictions since then have been, for the most part, cumulative. The most significant initiative took place on November 19, 2001—in time for the busy holiday travel season—when Congress passed the Aviation and Transportation Security Act, which officially formed the Transportation Security Administration (TSA).

Although the breadth and intensity of control of the FAA (under the Department of Transportation) still transcends all other aviation-related authorities—after all, it was the FAA’s decision that halted all air travel for a few days after 9/11—passengers are far more likely to experience a regulatory onus through their more routine engagement with the TSA. (Though also initially under the authority of the Department of Transportation, the Administration saw its authority shift in 2003 to the Department of Homeland Security, which was also created as a direct consequence of the September 11th attacks, under the original name of the Office of Homeland Security.) The TSA radically transformed the implementation of airline security, beginning with a fundamental nationalization of the process, which, prior to 9/11, usually involved airport authorities contracting out the passenger screening task to private companies. Though some of the earliest regulations appear relatively subtle from the passengers’ perspectives—criminal background screenings on 750,000 airport employees, locked cockpit doors, reduced partitions between first class and business class passengers—the majority of them directly affect the customer base, because the passengers are the target of federal scrutiny. Almost anyone who has flown in the past decade is familiar with the regulatory additions: sophisticated metal and explosive detectors, x-rays, and lighting to determine authentic watermarks on drivers’ licenses or other personal ID. Many of the interventions have forced passengers to change their behavior: removing their shoes and belts, discarding all liquids bought from outside the airport, bagging personal toiletries under three ounces (anything larger is prohibited), undergoing far more frequent hand inspections of bags and even occasional frisking from TSA authorities. Enhanced security staffing has allowed the employment of body pattern recognition (BPR), so that passengers exhibiting suspicious behavior—excessive sweating, thick clothes on a warm day, use of pay phones—may undergo additional questioning. Following the failed attempt on Christmas Day 2009 by Nigerian Umar Farouk Abdulmutallab to detonate plastic explosives hidden in his underwear, the recent announcement that airports would expand the use and availability of full-body scanners was more remarkable by how little controversy it aroused, even as civil libertarians have criticized numerous initiatives since 9/11 for privacy violations.

To a large extent, Americans have adapted to these restrictions with unusual reticence, most likely interpreting them as necessary precautions in the interest of national security and the prevention of another attack at the magnitude of the destruction of the World Trade Center. The most obvious burden the restrictions have imposed is one of time—it is no longer possible to arrive at a flight 20 minutes prior to departure. The TSA screening process, at its smoothest, will usually still take at least 10 minutes, and depending on passenger traffic (which often varies during different times in a single day), can last approximately an hour. Even smaller airports often induce a significant queue, particularly since they engage in the more nationally regularized process with fewer TSA staff. Most airlines recommend arriving at an airport 75 to 90 minutes in advance of departure, while checking in at least 30 minutes in advance. In an effort to abide by the restrictions, airline revenues have floundered over the past decade, instigated at least in part by the crippling FAA suspension on all civilian air travel in the days immediately after the attack, though escalating oil prices and the economic downturn have subsequently contributed to the airline industry’s woes. To counter these rising costs, airlines have stripped away benefits such as on-flight meals while adding fees for checked luggage. Neither of these policies, of course, makes air travel any more appealing to customers, and they only add to the accumulation of annoyances originally induced by TSA’s demands during the security screening process. At the end of 2009, the chief executives of several major airlines many airlines have argued that consumers’ perceptions of the inconvenience of flying may have had more of an impact on the industry than travelers’ concerns about another hijacking or bombing attempt. Prospective passengers have undoubtedly weighed the advantages of air travel versus automobile, bus, or rail travel, in terms of additional embedded or elective fees, and on-trip amenities. But the biggest variable undoubtedly remains temporal: all of these inconveniences amount to more time a passenger must invest in a flight, to the extent that short-haul trips between major airports such as JFT to BOS may take longer than a car, train, or bus ride. Maneuvering through the safety gauntlet slows customers down enough that airlines lose their biggest advantage: speed of travel.

Time from A to B isn’t the only dimension to suffer in the wake of September 11th. These intensified security measures have exerted spatial implications as well, and airports can suffer profoundly. The new equipment, increased personnel, elongated queues, and partitions take up much more space than the “old-fashioned” passenger screening measures, and my guess is that the smaller airports, with far less available floor space, suffer the brunt of these initiatives. Woodrum Field, the regional airport of Roanoke, Virginia (ROA), shows what happens when the primary terminal is unprepared for radical changes: 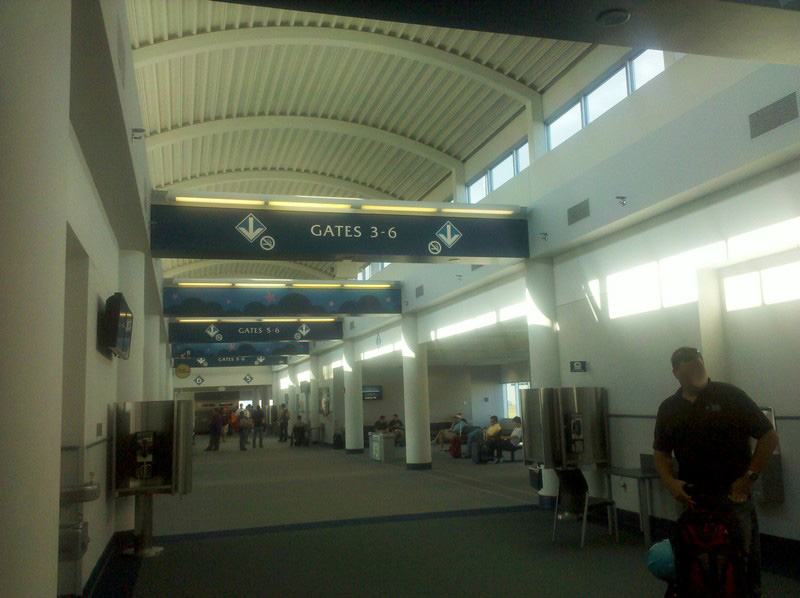 This photo represents nearly the entirety of the airport’s one concourse, visible as soon as a passenger emerges from the TSA security station. It isn’t large, of course, but that’s not a surprise, considering the airport serves a metro area of only 300,000 persons. Here’s the overhead sign which I was standing under in the first photo: 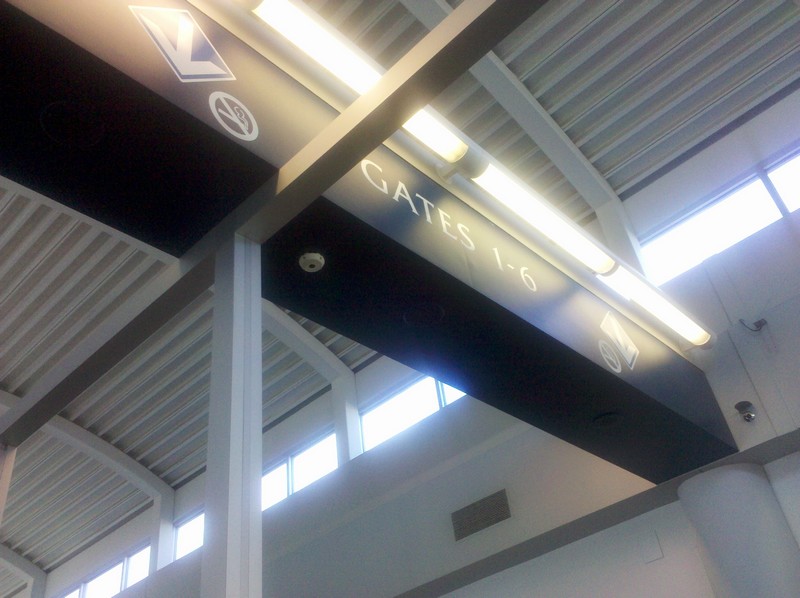 Notice that it lists six gates. Immediately to my left and slightly behind the point I was standing (back toward the airport’s entrance) is the busy Gate 2: 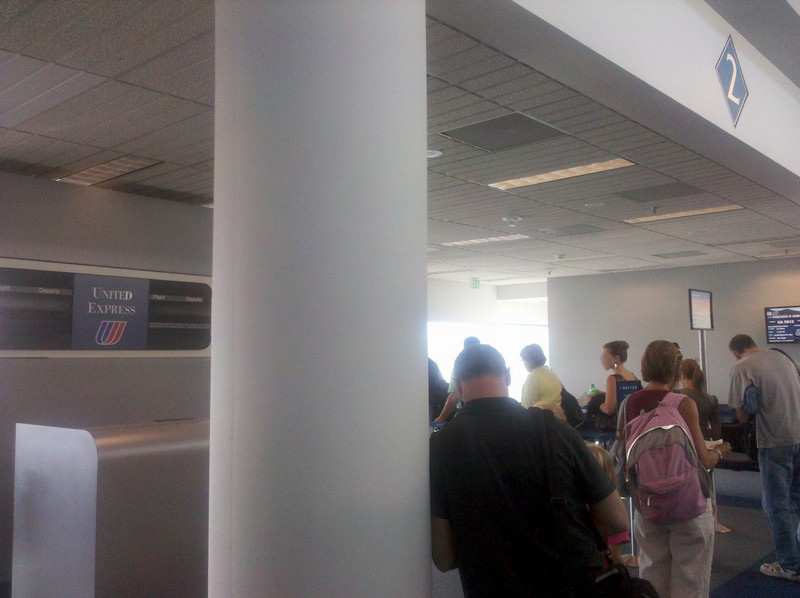 But if I look over to my right, what do I see? The glass partition separating me from the people who are still making it past the Transportation Security Administration. Far more telling is the label directly above the partition: 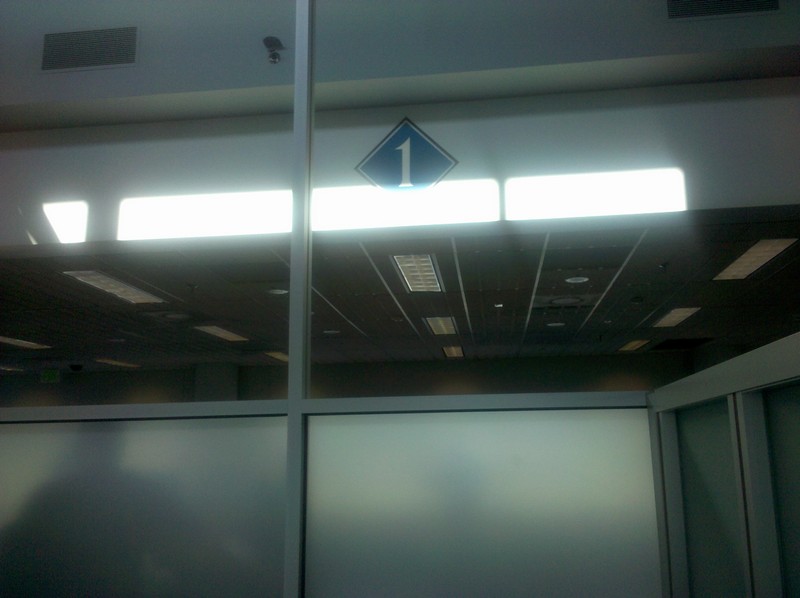 It would appear that the sprawling security configuration induced from 9/11 takes up an entire gate. The last two pictures demonstrate this more clearly: 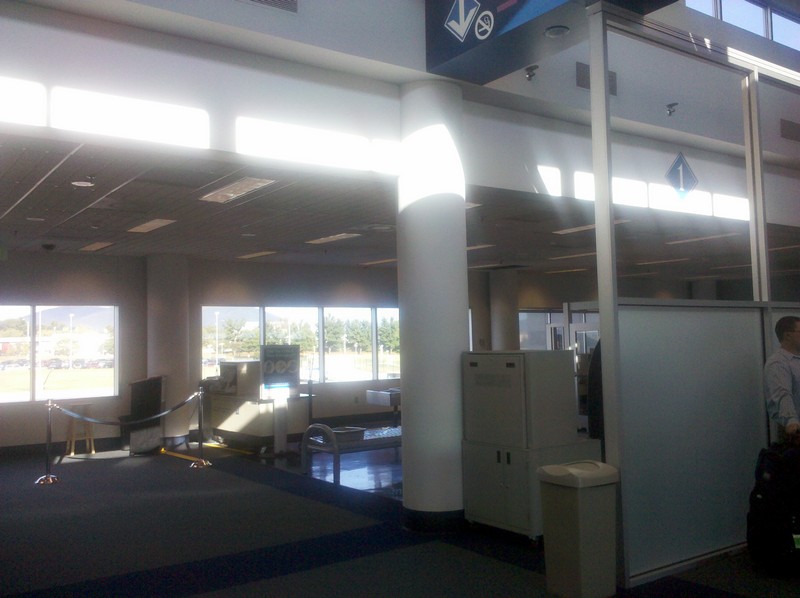 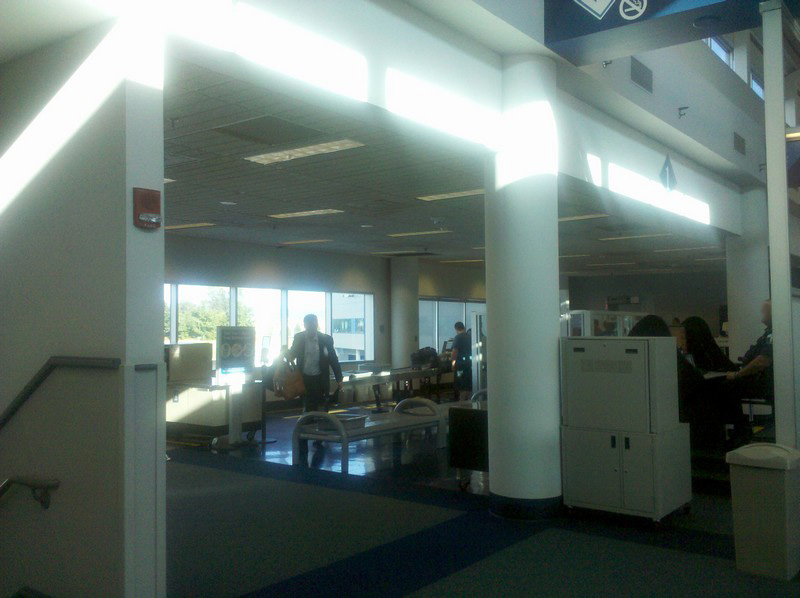 Roanoke Regional Airport apparently had to sacrifice one of its six gates for enhanced security procedures. It’s possible that such a shift amounted to no more than an administrative blip for the Roanoke Airport Authority. After all, the Roanoke metro is only growing modestly, at less than 4% since 2000. And, the number of enplanements at ROA declined over 5% from CY 2008, falling below 300,000 in CY 2009. But if two days of universally suspended flights after September 11 was enough for some airlines to skirt bankruptcy, one can imagine how sensitive the entire aviation industry is toward minor changes, and removing 16.6% of an airport’s available gates is hardly minor. The results of this cut undoubtedly impacted the airlines’ ability to schedule flights, as well as the timing of liftoffs on ROA’s two runways. Airlines most likely had to reduce the number of flights available during the day, juggle the times at which flights could arrive at the airport, or compress the headways between flights for the ones with highest demand, resulting in a greater likelihood of delays due to less cushion time between flights. If things got too bad at ROA, some prospective passengers may opt for other airports in the region, such as Lynchburg Regional Airport down the road (LYH), particularly if the later airport had a design that didn’t need to cut a gate to make room for new TSA regulations. While nearly all airports across the country have suffered declining passenger volumes over the past couple years, it is possible that having six gates available would have at least mitigated some of Roanoke’s diminishing enplanements. Falling passenger numbers and fewer available gates could ultimately influence some of the City of Roanoke’s own economic development initiatives, since passenger volume numbers generally correlate heavily to a region’s sphere of economic influence.

This blog article does not intend to lambast the FAA, TSA, DHS or any of the other acronyms that have engendered the culture of aviation security we can observe today. The fact that attempted terrorist attacks on airplanes persist nearly a decade after the planes crashed into the Pentagon and WTC indicates that expansive and adaptive security measures are still worthwhile. But top-down initiatives elicit a bottom-up response that rarely meshes perfectly with the intended results. It is just as possible that other airports in the country had to make even greater spatial sacrifices in the interest of security; imagine what would have happened to an airport that had to sacrifice one of only two gates. Some safety measures incur the greatest cost at the point of installation, such as the square reflective devices embedded in streets that I blogged about earlier. Others have long-term implications. In the case of Roanoke Regional Airport, the culpability may rest on the TSA, or with the original aviation architects who failed to design a concourse that could adapt to changes. The wisest resolution would avoid ascribing blame and simply allow the airport authority and the airlines to continue collaborating to provide passengers with the most efficient mode of transit available, even if, someday, our TSA passenger screening stations require enough space to hold a passenger’s dressing rooms.

PrevMONTAGE: Animal and vegetable deserve a break today.
Butts in the loo.Next