In the first half of this blog post, I explored to the best of my ability the shifting religious landscape from an often overlooked perspective: that of the small-town southern Jew. The South is not without its high concentrations of Jews, particularly in south Florida (north of Miami), a rapidly growing Jewish population in major cities like Atlanta or Houston, and—depending on whether one considers it a southern city—Washington DC. However, the general perception remains that the white population of the rural South is a relative monoculture: in some regions, over 90% of the white population identifies with Protestantism; the numbers for African Americans aren’t much lower. And in three states (Mississippi, Alabama, and Oklahoma) over 30% of the population belongs to the Southern Baptist Convention (SBC). Thus, an inference of relative religious homogeneity is not entirely unfounded.

But the rural south was not always a mere stronghold of Christianity; or exclusive Christian, for that matter. Though today they would qualify as small towns, in the 19th century, communities of over 5,000 people were often perceived as bustling commercial centers in the overwhelmingly agrarian south. Towns such as Donaldsonville and St. Francisville, Louisiana—both under 10,000 today—were flourishing communities that attracted Jews from Alsace, no doubt due in part to the shared French affinity. After the Industrial Revolution, the settlement patterns of the US marched aggressively toward favoring the large cities, though of course the South urbanized much later and at a much slower pace. However, by time of the Depression, the aforementioned towns in Louisiana began to feel their importance erode, as the major cities of New Orleans (long the commercial capital of the South) and a rapidly growing Baton Rouge left Donaldsonville and St. Francisville to relative stagnancy. The Jewish population plunged in these small towns, as their retail trades became engulfed by nationally recognized department and variety stores. The children in these Jewish families left town or—particularly in Catholic areas such as south Louisiana—intermarried with Christians. In many southern towns, all that remains of the Jewish heritage is a tiny cemetery on the outskirts, but a well-attuned eye can find other evidence throughout the Cotton Belt.

The Jewish presence of Mississippi is remarkably well-chronicled, especially considering that only about 1,500 Jews live in the state today, less than a quarter of the population from a century prior. One such town is Port Gibson, Mississippi, resting along the Blues Highway U.S. 61 about halfway between the state’s only two older cities, Vicksburg and Natchez, both of which also had much larger Jewish populations during their heydays over a century ago. Today, the significantly smaller Port Gibson (population 1,800) does not have an active commercial main street, but its principal residential artery, the leafy Church Street (also Highway 61 in Port Gibson city limits) remains remarkably well preserved and undoubtedly possessed the character that made it “too beautiful to burn” after General Ulysses Grant completed his Vicksburg Campaign, cutting off Confederate Control of the Mississippi River. 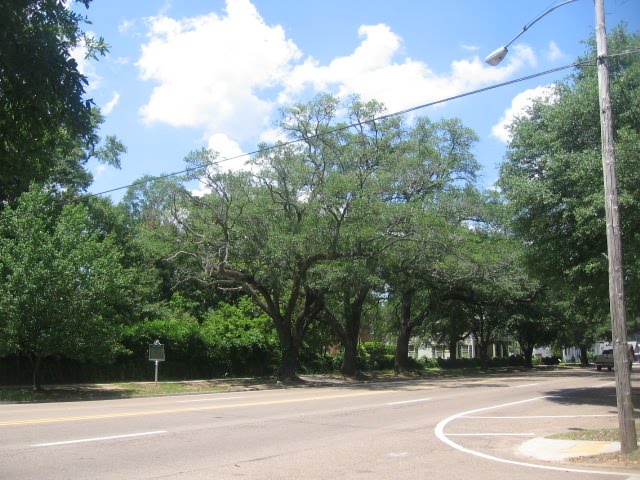 A good mile or so of Church Street features this canopy of live oaks and stately Victorian and Tutor homes. The Temple Gemiluth Chassed has not enjoyed regular use for over 30 years, yet it remains in remarkably good shape. 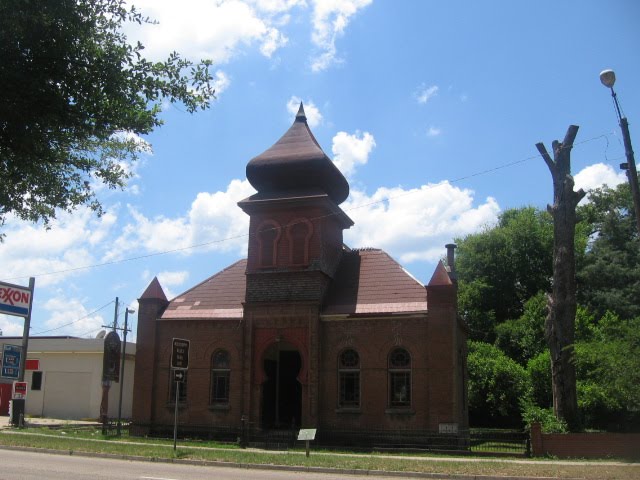 According the encyclopedia at the Institute of Southern Jewish Life, the Jewish population first arrived in Port Gibson by the 1840s, though not until the eve of the Civil War was the population large enough to sign a charter for their congregation. During the war, the Port Gibson Jewish population exhibited an unusually high level of support for the Confederate cause, with nearly half the population (and perhaps nearly all the adult males) joining the Army, even though only a few owned slaves. The building in the photo above did not break ground until 1891 and remains distinct as perhaps the only surviving example of Moorish architecture in all of Mississippi. 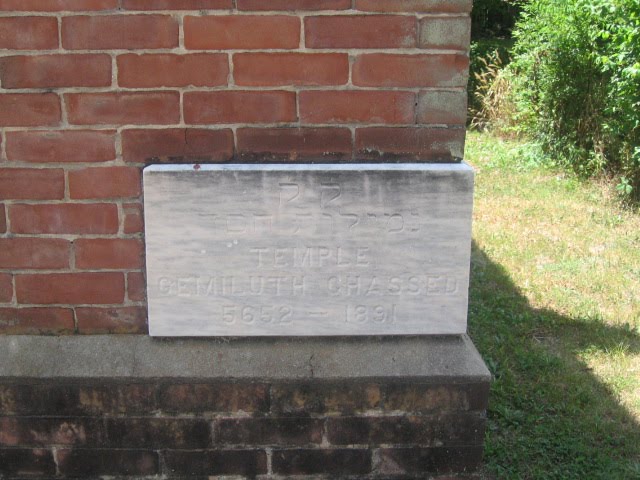 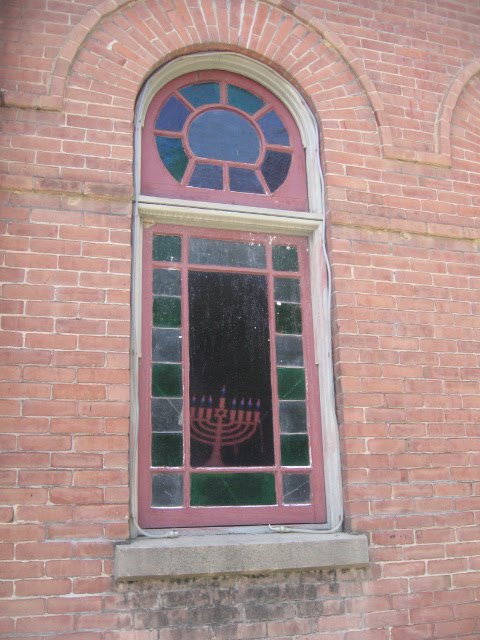 Like the Jewish congregation of St. Francisville, Louisiana (discussed in Part I of this blog post), Port Gibson struggled to retain a rabbi. One of the earliest, a graduate of Cincinnati’s Hebrew Union College, noted with distaste the institutionalized racial discrimination of the region, and Gemiluth Chassed never truly prospered. However, the building still enjoyed some level of use up through the 1980s, when the Jewish population of Port Gibson numbered four. Both historical documentation and visual evidence suggest that the town’s Jewish community evolved from within: the Institute of Southern Jewish Life reports that active participation in Shabbat declined, as did keeping kosher. Some families even displayed Christmas trees in their windows. After the congregation closed in the 1980s, the City was about to demolish the temple for a parking lot, but a local gentile family bought it to preserve it; the 100th anniversary of the structure brought Jews and non-Jews together in a commitment to the preservation of the heritage of southern Jewry. Thus, Gemiluth Chassed stands to this day, in remarkably good shape, though its current use is unclear. Contextual observations reveal why its history seems anomalous in a variety of ways: 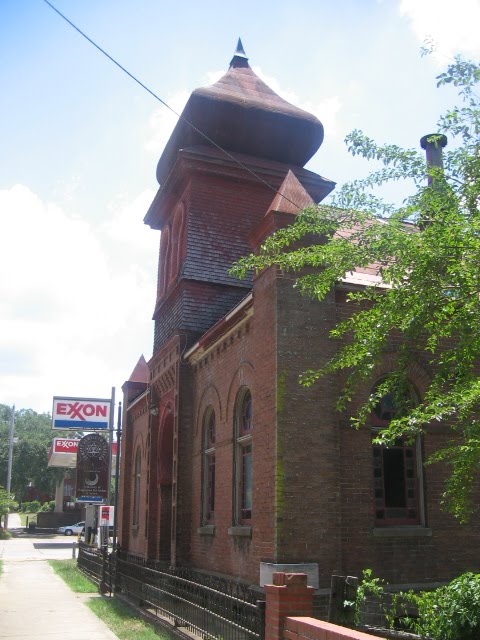 Yes, a gas station sits in the background, suggesting that a number of structures already faced the bulldozer as Port Gibson steadily depopulated in the second half of the twentieth century. Even more intriguing is the descriptive sign hanging out front. 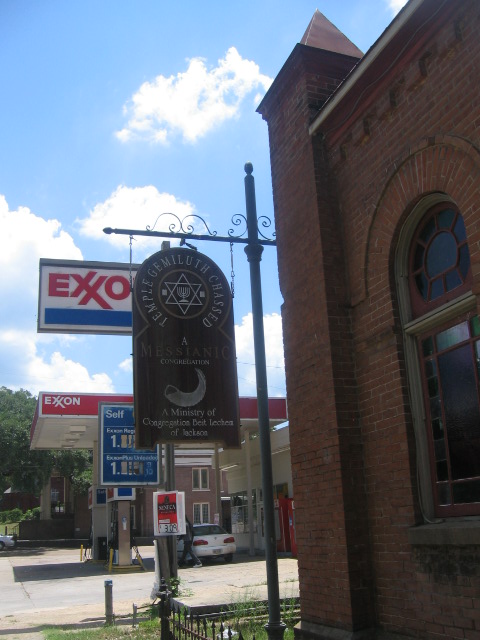 A Messianic congregation? Really? If this is truly the case, then its position on the ISJL website is questionable, since Messianic Jews believe that salvation depends on the acceptance of Jesus Christ as a savior—a position that both Jewish and Christian theologians would agree places it under the fundamental rubrics for Christianity. It is unlikely that the Jewish population in Port Gibson always had Messianic origins, since the movement did not emerge into the mainstream until the 1960s. But this declaratory sign may help to explain the community’s continued isolation, its inability to secure a rabbi, and—I’m going out on a limb—its comparatively high level of support for the Confederacy when most other Southern Jews were ambivalent. The Jewish population in Port Gibson may have lingered into the 1980s, but Judaism as a faith waned decades before, as the congregation passively allowed the overwhelmingly dominant Christian culture to encroach. By the time of Gemiluth Chassed’s closure, the Jews of this Bible Belt region identified with enough features of Christianity that they were willing to articulate it.

Although shadow of its former self—the main street of Port Gibson is big enough to suggest a much larger city—Port Gibson’s religious buildings, most of them appropriately flanking Church Street, remain in conditions ranging from good to impeccable. Today the town is 80% African American, yet the structures of these European derived, mainline Protestant, Catholic, and Jewish communities survive as references—signaling to passers-by the town’s diverse heritage, a time when Mississippi’s towns and towns across all America wielded enough economic influence to attract entrepreneurial immigrants. 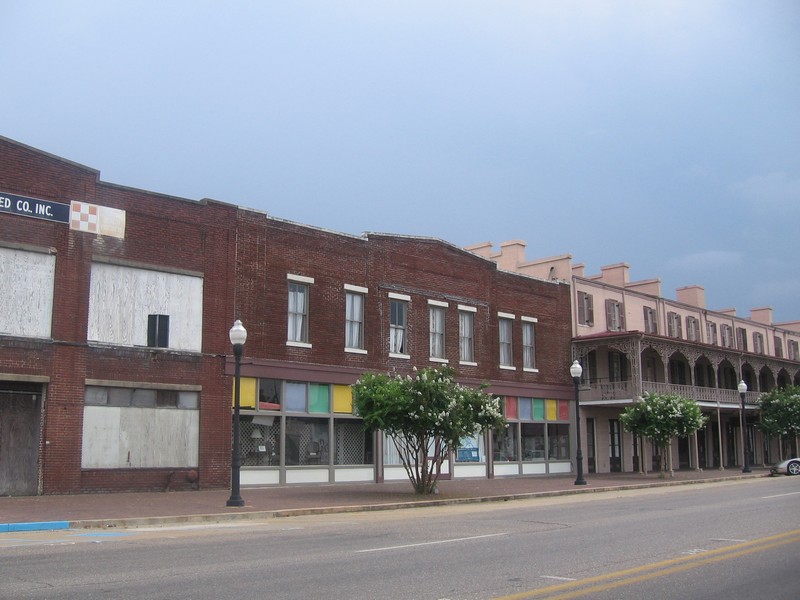 Selma, Alabama’s commercial growth and decline somewhat parallels that of Port Gibson, but with a peak population of 28,000—the amplitude of its changes has understandably been greater. Together with the state’s capital Montgomery (50 miles to the east), the population here rests in the heart of the state’s Black Belt, a strip of counties across the mid-southern part of the state, named for the rich, black topsoil so suitable for growing cotton, but also associated with the high percentage of African Americans living there. Most Americans today, if they are familiar with Selma at all, associate the city with the March 1965 voting rights marches that stretched from the town to the state’s capital. But Selma was a prominent small city prior to the Civil War, thanks to the processing of the abundant cotton and proximity to the distributional hub in Montgomery. According to the chronicles of the ISJL, Sephardic Jewish merchants began arriving to the city within twenty years of its 1820 incorporation, though for the entire 19th century, the population held services at private residences or space rented in churches. During the War, Selma was an epicenter of manufacturing supplies and weaponry for the southern cause; considering that nearby Montgomery was the initial capital of the Confederacy, sentiments among Jews in Selma toward secession were wide-ranging. Not until 1900 did the Congregation Mishkan Israel dedicate a synagogue. 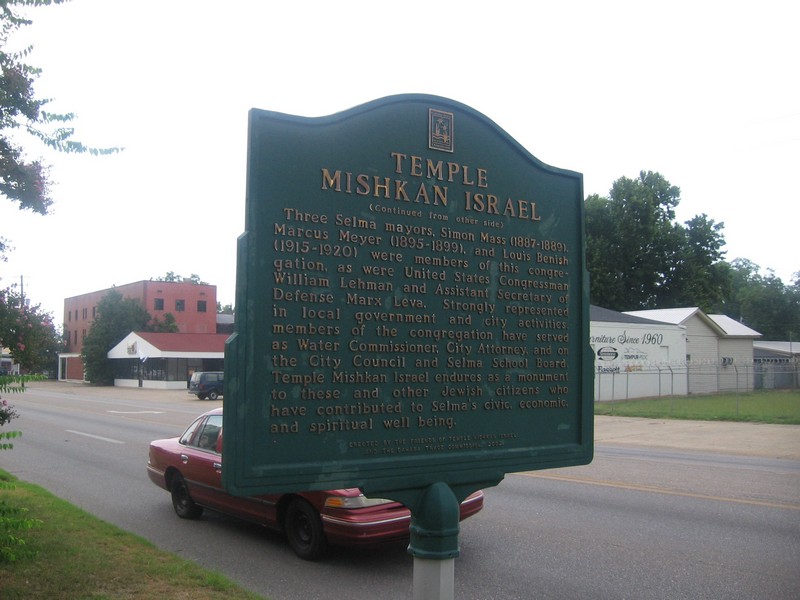 Throughout the first half of the 20th century, Selma’s Jewish population was robust—for about forty years, the city claimed an Orthodox congregation as well—and, as the historic marker above indicates, three of the city’s mayors were Jewish. The Civil Rights Movement polarized the community much as it did a century earlier: some of the most prominent Jewish retailers were ardent segregationists, though modern historians estimate that the majority of Selma’s Jews supported integration, even as they resented the paternalism of northern Jewish intervention. The population peaked at over 300 at around 1940, which at that point was approximately 1.5% of the city’s population. The decline was gradual at first, but then hemorrhaged after the 1977 closure of the nearby Craig Air Force Base, which in turn triggered a steady departure of industry from the city. Selma has lost over a fourth of its population since that time; the 2010 will likely reveal a city depopulated by more than a third from its 1960 peak of 28,000. The precipitous decline of the city is manifest in the downtown, which, as Alabama’s largest historic district, hints at former prosperity in the embellished buildings, many of which have long since been abandoned. 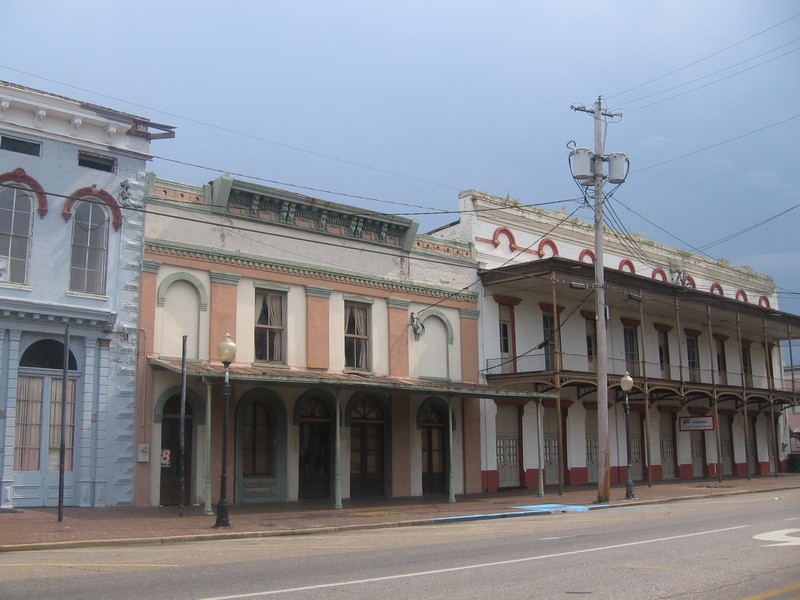 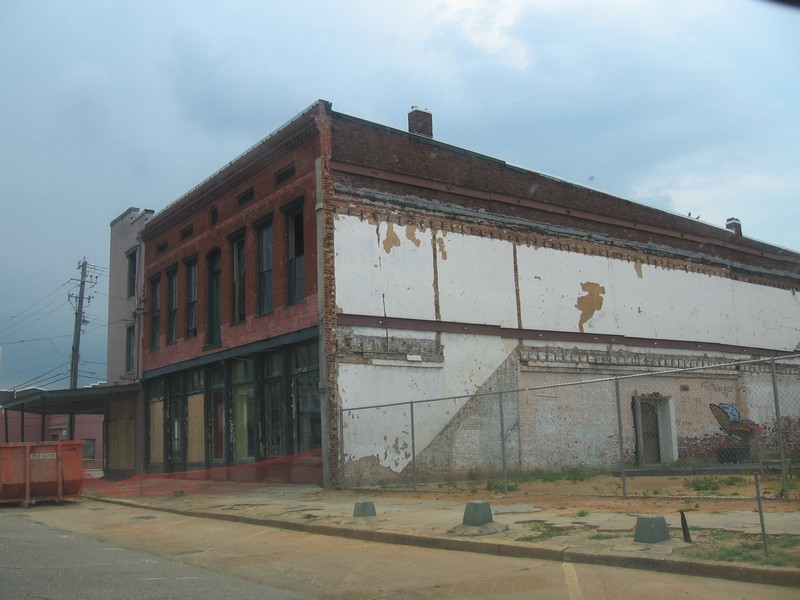 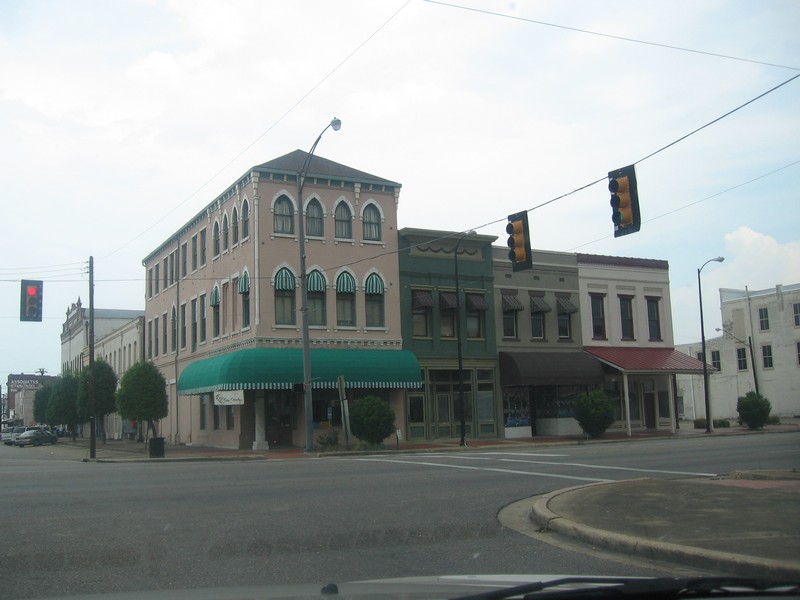 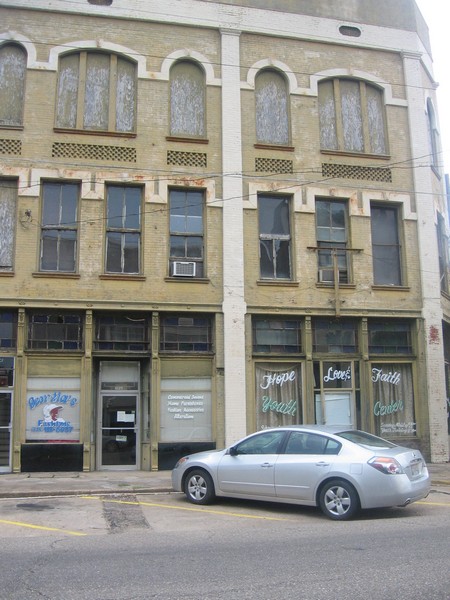 Only about twenty Jews remain in Selma today, most of whom are elderly; the congregation only holds worship services a few times a year in the original structure. 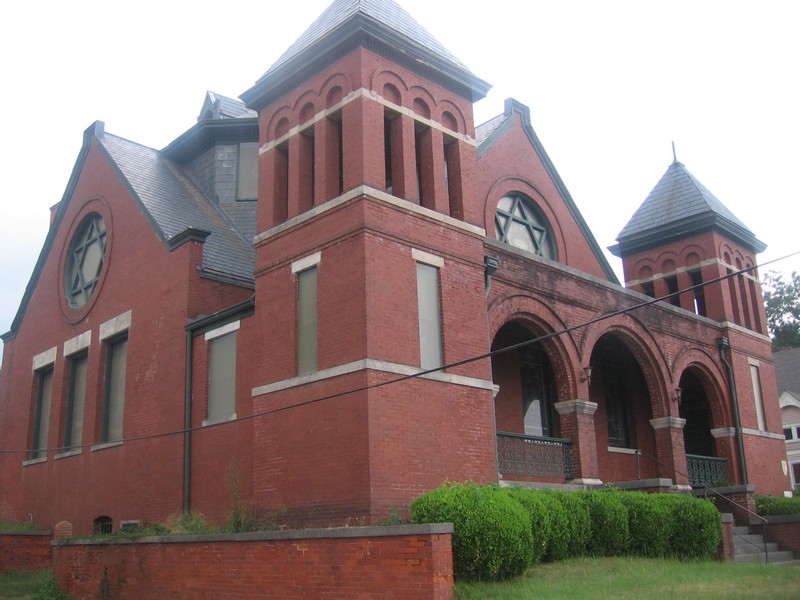 My first reaction when I passed the building was that it must be abandoned, largely due to the disheveled appearance of the grounds, and partly, I confess, due to my somewhat prejudicial disbelief that a city so economically depressed would still have a Jewish population. But closer observation of Temple Mishkan Israel reveals that it is in generally good shape: the roof (one of the first features to decay in an unmaintained building) looks fine, and the complete absence of wood obviously means painting is unnecessary. The congregation probably hires a groundskeeper to do just the minimum requisite lawn mowing and hedge trimming in order to save money. 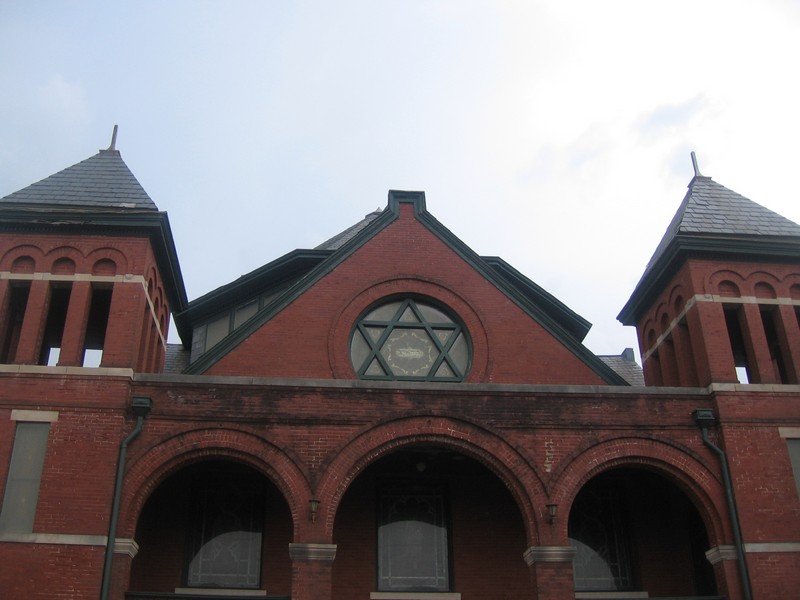 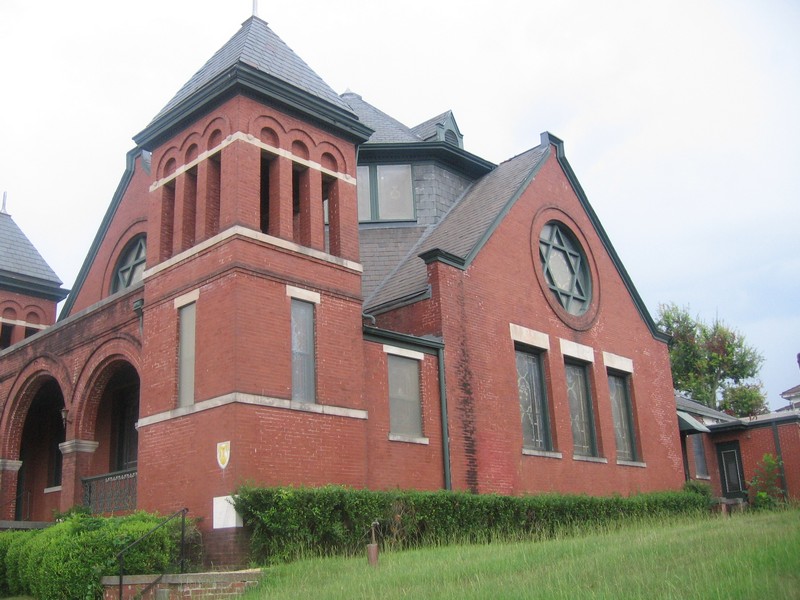 The frosted look of the stained glass windows on either side originally gave me the impression that the place was sealed and vacant, but I now believe they have just been protected from thick exterior glass, no doubt to ward-off vandals or potential burglars. The structure’s metaphoric and literal relation to the surrounding city resembles Port Gibson’s Gemiluth Chassed in a number of regards: both appear in excellent physical shape, yet the owners have transformed them into mausoleums, protected from the outside world and left in stasis, and signaling to the passers-by a heritage all but removed from the region. Temple Mishkan Israel has also intermittently hosted multi-faith gatherings that drive home the importance of cultural preservation, but Selma offers no visible incentive to encourage young Jews to move there, or its meager remaining population to stay. Preservation advocates may have to step up to the plate before too long, because comparative evidence in other communities suggests that the Jewish population in Selma will soon shrink to nothing—at that point, without a sponsor, Mishkan Israel may soon face the wrecking ball.

The cost for preserving a religious building when no subscribers to the faith live nearby must be astronomical. Yet Port Gibson and Selma both offer examples of intensified stewardship for obsolescent structures that would struggle to find a renaissance. Jews in the South have clearly reorganized itself significantly over the past forty years, but, if the above buildings are any evidence, their prejudicial histories will remain standing for decades to come.

Stay tuned again for the third and final part in this series, in which I explore the further evidence of prior Jewish settlements in the South, only this time using large metropolitan areas.