The cruel hand of improvement takes a swipe.

I have made a real attempt in this blog to hide my dislike for the word “progressive”—the truth is, I explicitly try to avoid using it whenever possible. When I have let it slide, I nearly always find myself framing the word with those irritating, ironic quotes, as though there’s a current of mockery underlying in my use of the term. Perhaps I really do mock it. To me, the root word “progress” and all of its variants have essentially collapsed the supremely complicated array of human endeavors into a narrow, facile trajectory. To call one’s self a progressive reeks of ethical posturing and self-aggrandizement. Of course we all seek progress, but it takes a certain ego to identify one’s ethos with undistilled social betterment. It often seems that one particular contingent within the political spectrum has co-opted the word, but is it fair that anyone and everyone who disagrees with the progressives can be branded as “anti-progress”? Are the non-progressives regressive? [If the political left employs words such as “progressive” or “social justice” with obnoxious complacency, the right is just as guilty: since when did social conservatives have a monopoly over “moral values”?] These observations aren’t remotely profound and they are intertwined with my own cynicism toward all forms of political partisanship. (For a better worded representation of my beliefs toward progress, check the Emerson quote that begins this blog article.)  I don’t want this blog ever to seem petty or mean-spirited, so I will continue to avoid any of the ideologically charged words in quotation marks listed in the earlier sentences within this paragraph…at least for the most part.

But an informational placard I saw recently was just too revelatory for me to pass up. 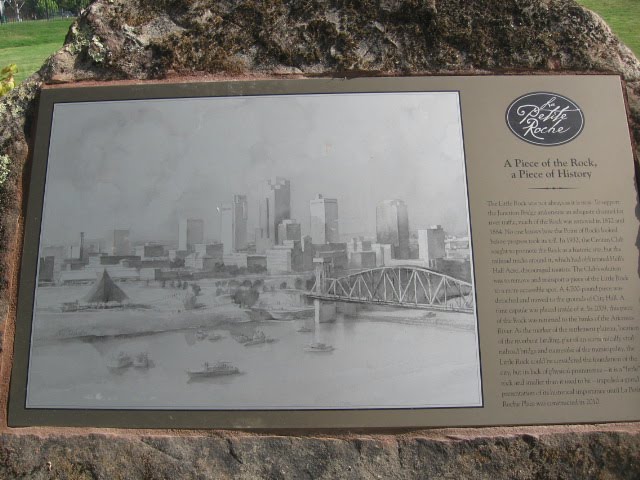 It is a part of the attractive if aggressively programmed waterfront in Little Rock. 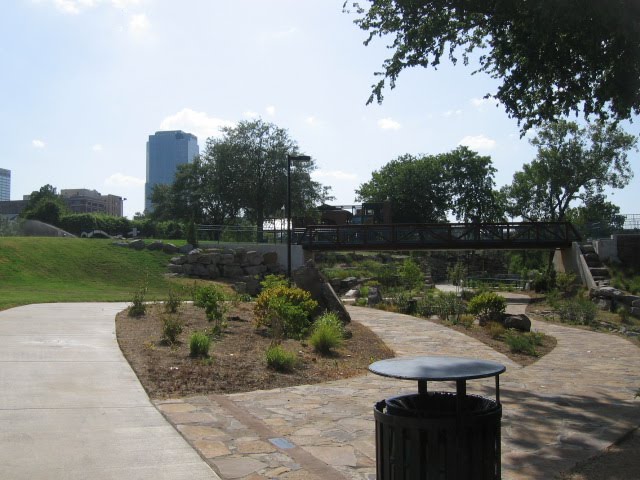 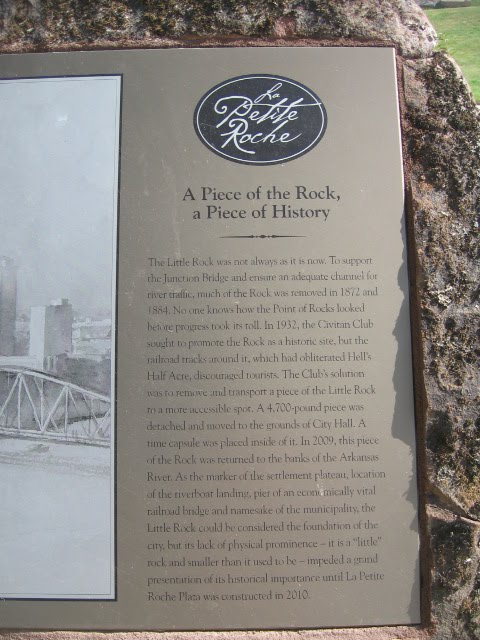 Since it’s not easy to read from a photograph, I’ll summarize: the petite roche was largely removed in 1872 to make room for a Junction Bridge that will still allow clearance for riverboat traffic. At that time, no one bothered to chronicle or graphically capture the appearance of this distinctive rock formation; thus, the identity upon which the city bases its name was shattered over a century ago. Only in the 1930s did city boosters strive to recover the heritage by moving part of the Little Rock onto the grounds of City Hall. At the point of the completion of this phase of the riverfront park (La Petite Roche Plaza), another piece of the little rock was returned to the banks of the river, though it now lacks any real physical prominence: it is indeed a little rock, and even smaller than it was in the past. The Plaza intends to commemorate a largely dissected part of Arkansas history.

The context itself is less interesting than in the choice of words at the end of the third sentence. 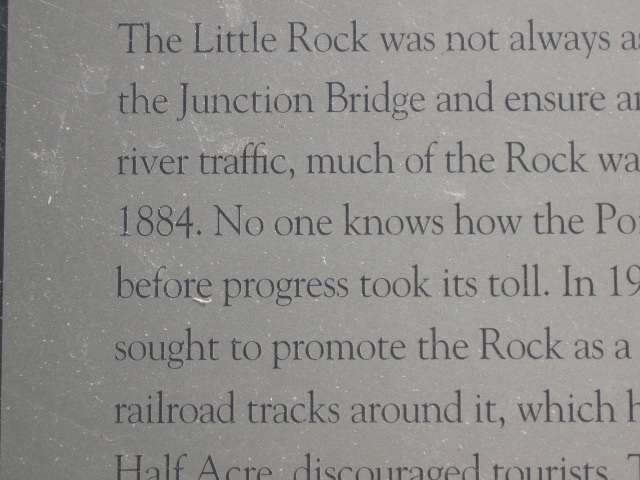 “Progress took its toll.” This use of “progress” reminds me of a documentary I once saw about the construction of the interstate highway system into downtown New Orleans. In order to build an elevated, limited access portion of Interstate 10, the Bureau of Public Roads used eminent domain to claim hundreds of homes slicing through neighborhoods and destroying the live oak canopy on a large stretch of Claiborne Avenue. Such a process was hardly unique to New Orleans; it took place in nearly every large city in America, usually traversing through the neighborhoods where the land was cheap, which typically means work class—and often minority—communities. This documentary interviewed a few members of the now bisected Treme neighborhood in New Orleans, including one older gentleman who remarked that, after the interstate, the small businesses, community cohesion, and the magnificent tree canopy were destroyed, but “I guess that’s the cost of progress,” he added without a trace of irony.

Progress raises its ugly head again. Most urban planners will inform you of the devastating toll that the interstate highway system exacted upon American cities, but the process was not terribly controversial at the time—it certainly didn’t elicit a great divide between conservatives and progressives. In fact, many people who hoped to save the city through urban policy saw interstates as a sine qua non—unimpeded access to the downtowns may be the best way to keep them alive when the suburbs were increasingly choked by traffic. Today, most urban theorists lump the urban segments of interstate highways up there with urban renewal as among the most destructive campaigns against the city’s built environment. But it was progress back in the day, and by the estimates of the man in the Treme, it might still be seen as progress to the eyes of many. Here’s what survives of the Junction Bridge in Little Rock: 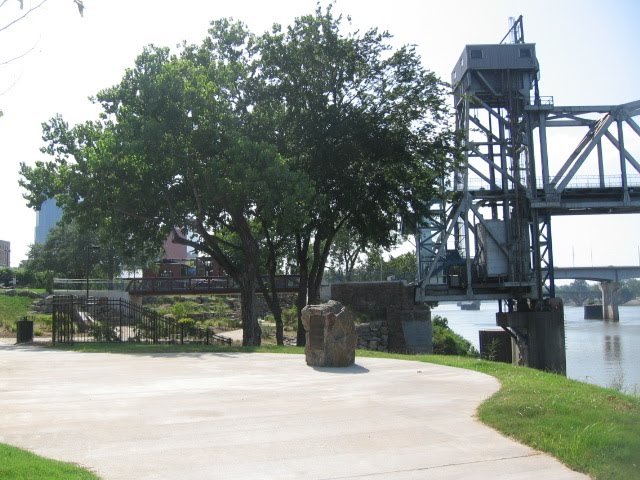 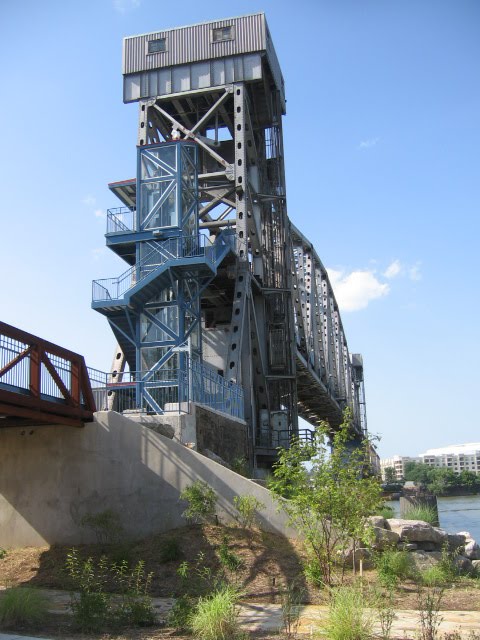 The Petite Roche Plaza commemorates metaphorically, because the bridge itself dominates the landscape. And it, too, does not serve its original purpose. Long gone is the railway, but it now operates as a pedestrian bridge to reach North Little Rock.

We almost instinctually are a teleological species—perhaps our capacity to reason is wedded with our need to seek and achieve goals. No other living creature demonstrates a visible interest in collective improvement; bees may operate collectively, but it’s more about self-preservation than a goal of making a better bee-life than it was for the hives of yesteryear. Human capacity to reason also endows us with individuated notions of what constitutes progress, and any milestone social achievement for some people is step in the wrong direction for others. The phrase “progress took its toll” on the Little Rock placard should seem like an oxymoron, since the word usually denotes positivity, while “took its toll” implies negative consequence. But the semantics of a word like progress are as loose and fungible as there are belief systems, so the progressive movement will forever brand its highly divisive ideology with “social betterment”, much to the chagrin of those who interpret progress under completely different standards.

PrevLet the feet do the wayfinding.
Streetscape enhancements in a spray can.Next

5 thoughts on “The cruel hand of improvement takes a swipe.”