Let the feet do the wayfinding.

Among the quietest, most modest recent additions to the American landscape are aids for the visually impaired. With little fanfare, they have proliferated in the past decade; perhaps it is to be expected that this has happened discreetly, since the target constituent cannot see them. In an increasing number of downtowns, one hears a voice or—more often than not—a “chirping” sound upon crossing at an intersection when a “Walk” sign flashes. This cue provides an auditory signal to cross for those who cannot discern the flashing signs. In some cases, these enhanced signals also provide a vibrotactile indicator when pressing the button to cue the pedestrian crossing. It will no doubt take many years before they become status quo. At this point, it appears that one is most likely to encounter the auditory crossing signals in places that are both pedestrian oriented and (most importantly) wealthy, since this process usually requires a complete replacement of the signals, rather than simply adding the chirping device. In short, it costs the government money.

However, another aid for blind pedestrians is popping up everywhere, from the big cities to the remotest towns. 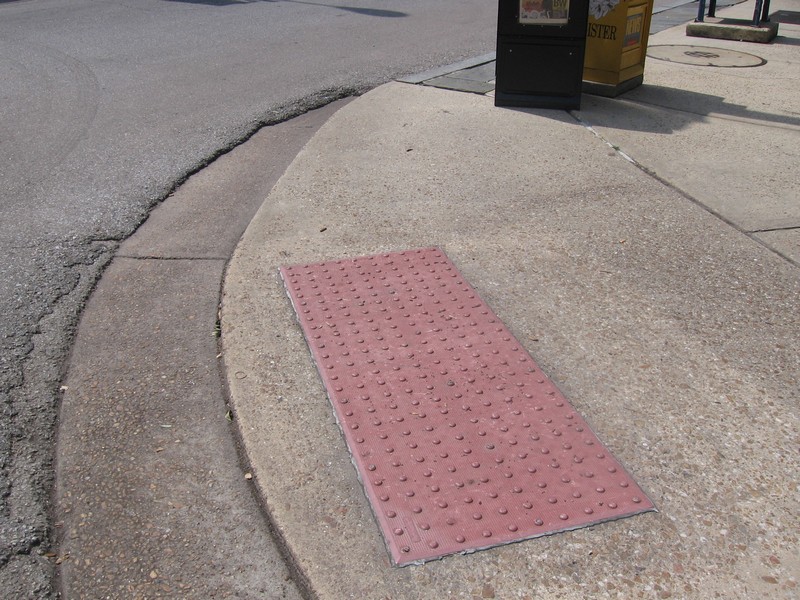 If you are as clueless as I was until about two years ago, you might have thought these were intended to give traction to wheelchairs as they make their way up the ramp to the sidewalk. Not so. They are Tactile Walking Surface Indicators, detectable warnings, truncated domes, tactile paving—they have a number of names. I’ve mentioned them briefly in a blog article about complete streets for pedestrians. Their fundamental goal is to alert to the blind and visually impaired when they are about to leave a sidewalk and enter a street or a driveway in which cars may pass. They’ve been required since the passage of the 1991 Americans with Disabilities Act (ADA), but were soon suspended so the Department of Justice could assess their effectiveness. One environment that did not receive the exemption were subway and train platforms, which now employ these devices across the country to warn blind transit users when they are at the edge of the platform where the train may approach. Only in 2001 did the Department of Justice end the suspension, and since that point, public works departments have been installing them aggressively. They usually look like the one above, or maybe curved like this one in Indiana: 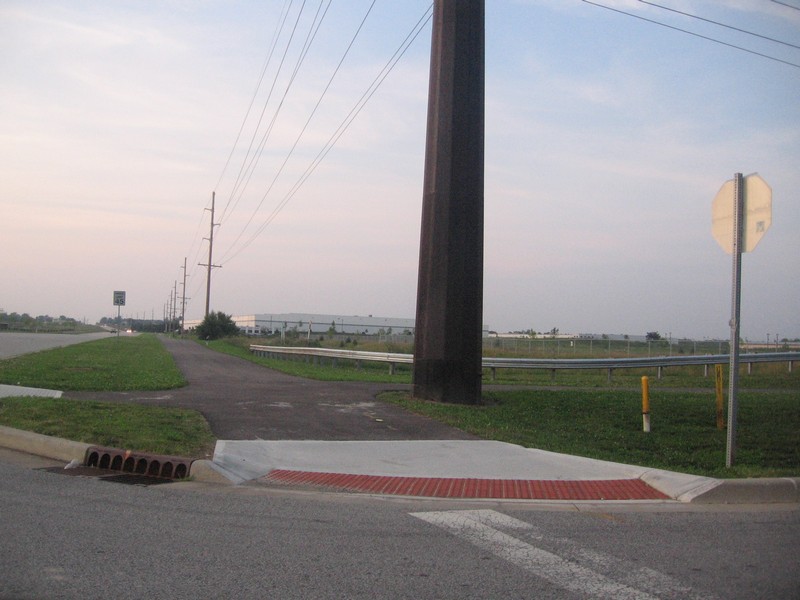 Typically they are made of rubber, and my observations suggest that they are usually red in color in the northern states, and yellow in the southern. Sometimes they’re made of limestone. I’m not sure why, but the top-most photo is clearly an exception to the color rule—it’s red and it’s from Mobile, Alabama.

Alabama cities also provide some interesting examples of how these Tactile Walking Surface Indicators have evolved over the years. The one below in Montgomery seems to be an older model—I started noticing it long before the truncated domes, or “bumps” as we humans might call them. 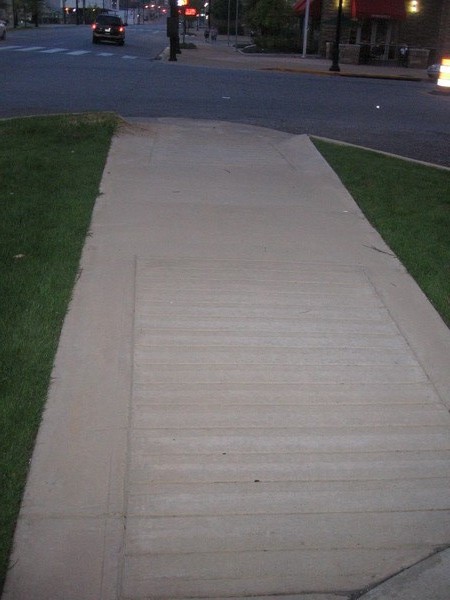 Look familiar? It consists of small parallel “valleys” carved in the concrete. But I am pretty confident the design has been retired, because it’s simply not that detectable for those who don’t walk around downtown in their bare feet. They aren’t as effective of a tactile walking surface indicator as those raised bumps (evocative of Braille?)  A visually impaired person might spot the grooves with the white cane, but not easily, and particularly not if it has been heavily worn down.  They just don’t quite do the trick.

Here’s another model of Tactile Walking Surface Indicators from Mobile that I had never seen before: 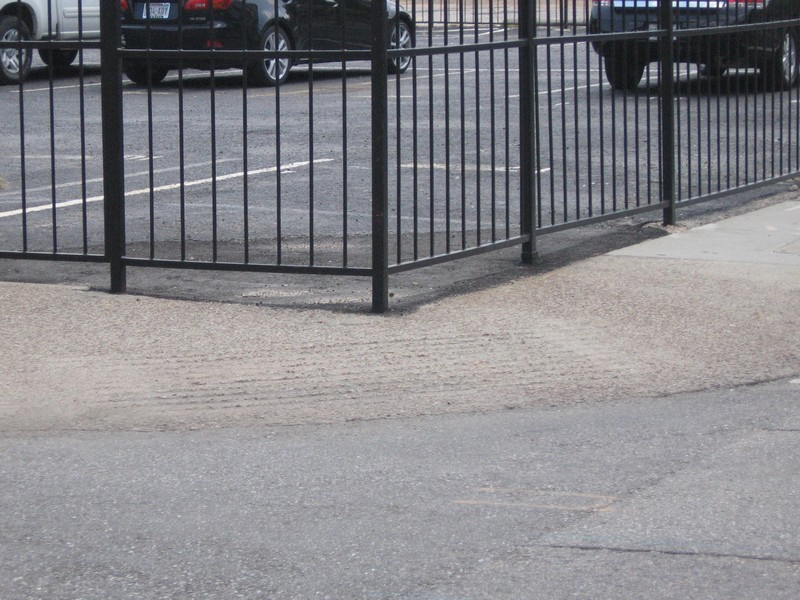 It’s sort of the inverse of the previous model, but instead of valleys it provides parallel raised concrete “ridges”. 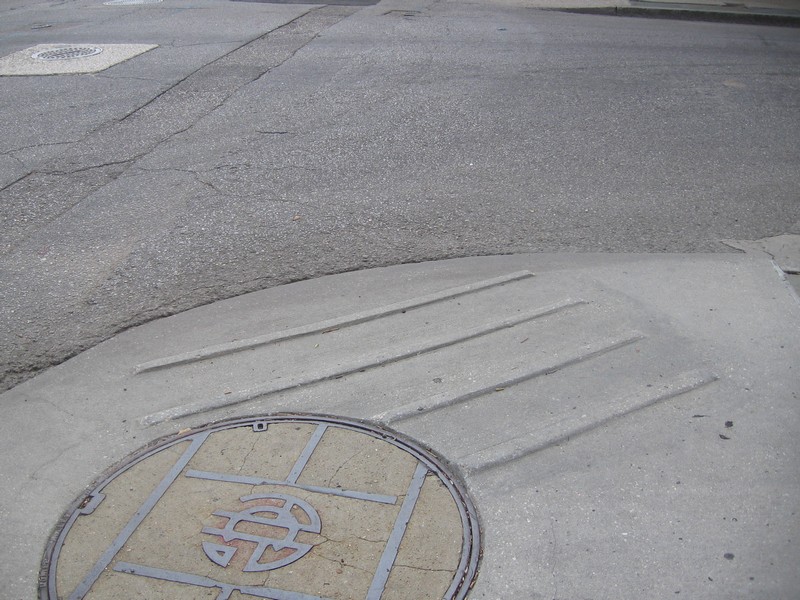 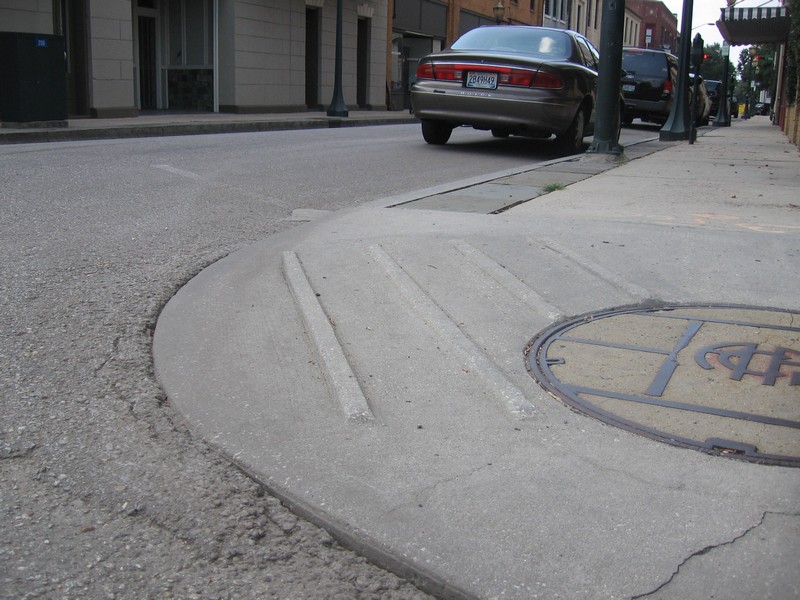 My guess is this tactile paving proved unpopular from the beginning because it is almost too obtrusive. It could prove a tripping hazard for non-disabled persons, as well as a major source of discomfort for someone negotiating the ramp in a wheelchair. I personally have never seen this anywhere else before; if cities ever introduced them, most have probably been removed and destroyed long ago.  The more commonplace Tactile Walking Surface Indicators rendered this obsolete; it wouldn’t surprise me if, the next time the sidewalks and curbs needed upgrading, the DPWs in Mobile and Montgomery replaced these with the now universal rubber material.

This subtle transformation manifests the continued trial-and-error approach to integrating devices that aid the disabled. Rarely have they proven controversial, particularly the tactile paving that uses the raised bumps, most likely because it isn’t terribly costly to install. Audible signals, on the other hand, have raised some ire—whether because the sound is so loud it keeps the neighborhood up at night or because of deferred maintenance due to tight municipal budgets. The second of the two hyperlinks from the previous sentence elicits a particularly interesting debate on how far the public sector must stretch its dollars to try to accommodate everyone. After all, even with the tactile paving, we in the US have not begun to approach the level of sophistication which these devices have achieved in Japan, where entire urban paths guide the blind to safety (and where this invention originated). The accommodation of disabilities doesn’t always mesh well with American’s teleological nature; in all likelihood we will never achieve truly universal design, since some innovator will identify a heretofore unrecognized problem by unveiling—and patenting—a solution. Someday even the Japanese technique will become obsolete. But those who grumble that these things cost the taxpayers should blindfold themselves for a day; it can only help to remind them of the infinite complexity behind the pursuit of public good.

PrevRolling back the pages of mega-retail history.
The cruel hand of improvement takes a swipe.Next