Rolling back the pages of mega-retail history.

I’ve referred several times in the past to a labelscar without acknowledging that the term is hardly part of everyday idiom. A popular retail website/blog might share the name, but that doesn’t mean it has more than niche appeal. But it also isn’t particularly tough to figure out. It usually involves little more than the faded or discolored horizontal storefront wall on which a retail brand’s logo or sign was once mounted. Generally, labelscars are only visible in storefronts that are currently vacant; a new tenant will most likely paint or build over any remains of the one that preceded it. Frequently, one can tell from the shapes of the discolored paint what store used to occupy the building, especially if you care about these trivialities as much as I do. But every now and then, a labelscar will leave people scratching their heads, as this one did for me, on the highway in the outskirts of the southeastern Arkansas town of Monticello. 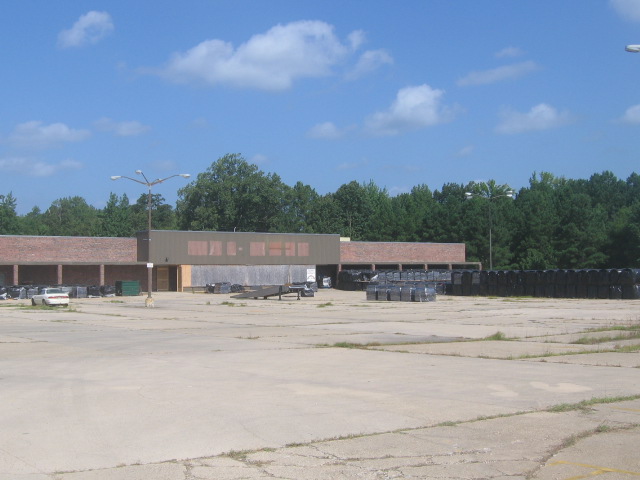 Let it first be known that this was among the few real indications of retail blight in what otherwise seemed like a highly prosperous, automobile-oriented corridor in this town of about 10,000. But most of the aesthetic details—the brown brick, the vinyl façade, the length of the weeds growing in the cracked parking lot—suggested that this building has been vacant or underutilized for quite some time. As I got closer to the structure, I could just begin to discern some lettering out of the labelscar, followed by the inevitable palm to the forehead. But of course: it’s a really old Wal-Mart! 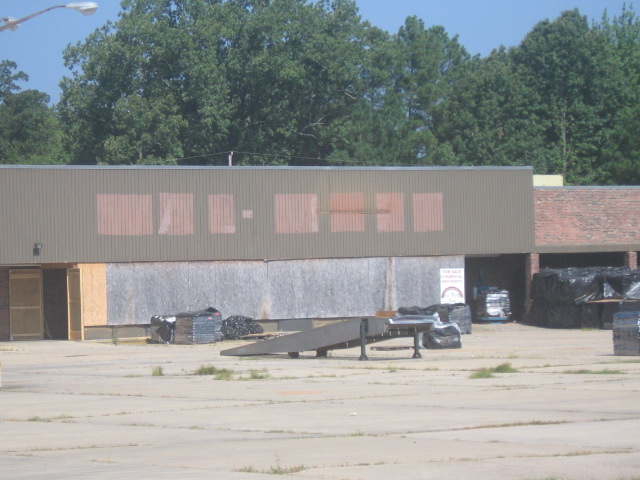 By old, we’re talking about a big-box that predates the company’s proliferation to national visibility in the late 1980s and early 1990s, deftly realized through this graphic map series. Prior to that time, Wal-Mart was still a regional discount retailer, widely known in Arkansas and Missouri, then it eventually radiated outward like a fan toward Oklahoma, Mississippi, Tennessee, Louisiana, Alabama, Texas, Kentucky, and Illinois. I can’t pinpoint exactly when the company decided to deviate from the humbler aesthetic seen in the photo above, but the website provides a clear evolution of the company’s logo over the years. Scrutinizing the painted-over lettering it looks a bit more like the unadorned, extra bold, sans-serif font of the 1980s:

The prevailing brown-ness partly gives it away, and it clearly is a hyphen between the “Wal” and the “Mart” (and not the star seen in the 90s Wal-mart logo, or the asterisk/burst from today). However, I have to admit I’m a bit fonder of the “Frontier Font” logo that dominated the seventies and even a good part of the sixties:

Yes, it’s clearly a western style, and it probably seemed a bit too parochial as the company continued its expansion toward the northeast. [Incidentally, I recall this font style being fairly popular a few years after it was discontinued, when in around 1990 the Adobe corporation—if I recall correctly—introduced a series of “Western” themed fonts with names such as Ironwood, Cottonwood, Juniper, and Mesquite. They have lost much of their salience today, though the logo for the disappearing steakhouse/buffet restaurant Ponderosa used a fond almost identical to the Adobe typeface, back in the day.]

The physical appearance is the most critical element, however, that consigns this abandoned Wal-Mart in Monticello, Arkansas to a relic status. Brown brick was a commonplace suburban retail typology thirty years ago; many other strip malls and supermarkets employed it as well, though Wal-Mart has largely distinguished itself for its dogged refusal to include windows on the façade. (After all, glass windows effectively prevent that interior wall holding shelves.) The Wal-Mart that ascended in the 1980s brought about the archetypal grey-and-blue exterior which most of us remember to this day. No doubt it offered an eye-catching distinction from the prosaic appearance in the above photos. Yet currently, in all but a few small towns, these once-ubiquitous structures have gone vacant, as Wal-Mart outgrew their square footage and moved into a new supercenter typology, sometimes adding over 50,000 more square feet. The photos below, taken from an earlier blog post on suburban retail blight outside of Indianapolis, show the standard color scheme of the stores during the height of Wal-Mart’s rapid ascendancy. 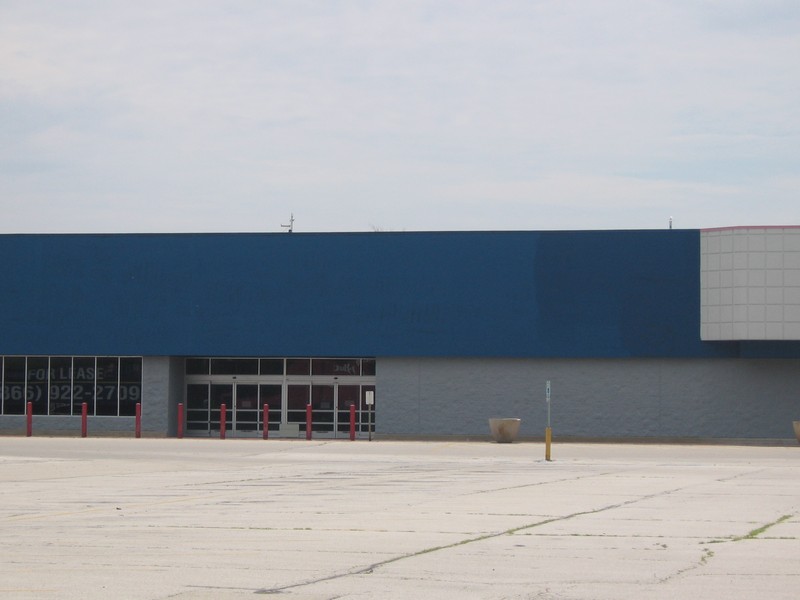 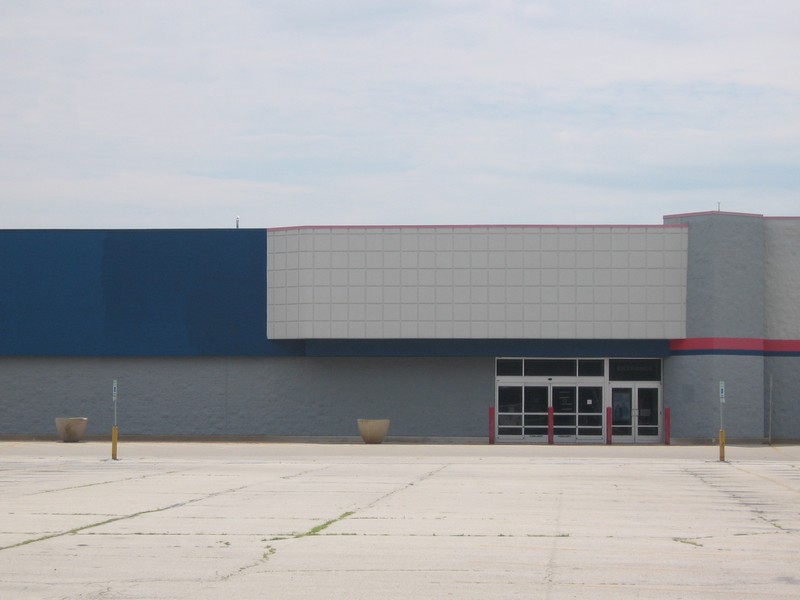 Though the labelscar is hard to spot, it’s obvious where those letters used to be.  If a Wal-Mart retains this color scheme today, more often than not, it is closed, having relocated down the road. Those Wal-Marts that didn’t relocate simply painted over them in the past few years, to adopt a more aesthetically pleasing exterior for the new decade, modeled after this logo:

Most Arkansans over a certain age no doubt recall the façade and logo of the Wal-Mart from bygone days, back when this particular unit was still in operation. No doubt Monticello received a variant of the blue-and-gray upgrade prior to the current modern Supercenter that stands a mile away, so chances are that the world’s largest retailer departed this brown-brick structure almost two decades ago, when the company first adopted the blue star logo. 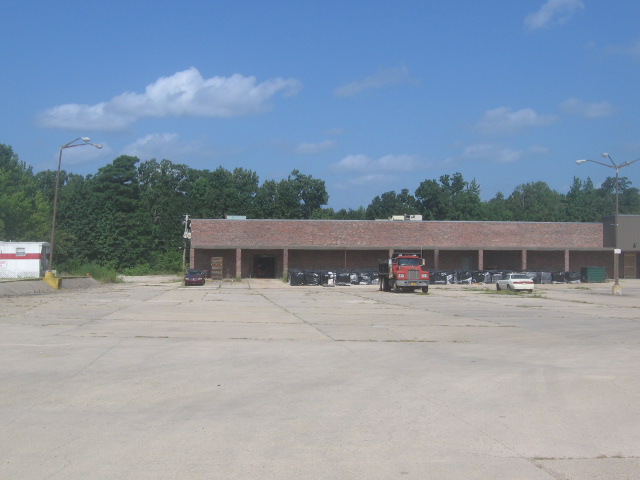 The building in the photo is clearly not completely vacant—the numerous pallets and scattered vehicles out front suggest that it’s still serving as some low-intensity warehouse. But what does this say about the Wal-Mart brand, that only a very limited region of the US likely has any recollection of a logo that’s a mere eighteen years old?  Or that a labelscar is the closest evidence we have that it ever existed?

Think of other major brands and the evolution of their logos. If none come to mind, this site or this one should help. Coca-Cola should ring a bell, and, of course, so should Pepsi (among the most restless of major brands). So should Apple and Kodak. The difference, of course, is that the above brands refer to movable products and (often) durable goods, not a purveyor of goods like Wal-Mart. Though they most likely had regional origins as well, their ability to expand across a national market is much greater because the manufacturers of these goods do not require additional real estate to increase their brand’s visibility. Wal-Mart does. Thus, the disposal of the old, misguided “Coke” logo from the 1980s may have been costly to the decision-makers in Atlanta, but it didn’t litter the American landscape outside of some faded billboards and storefront signs. Wal-Mart’s architectural evolution over the years has had more to do with changing consumer demands for gross leasable space, but the ensuing abandonment has frozen their older façades and labelscars of logos in time. It’s only a matter of years before consumer tastes shift, and Wal-Mart dutifully responds with a new building layout, leaving the structures with the current logo empty and frozen in time. Then again, perhaps it has already happened. And if the photo were less blurry, I’m sure we could see the labelscar.

PrevBrick roads don’t always lead to Oz.
Let the feet do the wayfinding.Next

5 thoughts on “Rolling back the pages of mega-retail history.”