While this blog post won’t win any awards for brevity (would my blog ever win such a prize?), it surely surpasses all others for the simplicity of the concept. The photo below details the sidewalk upgrade component of a traffic improvement initiative in the Southdowns neighborhood of Baton Rouge. 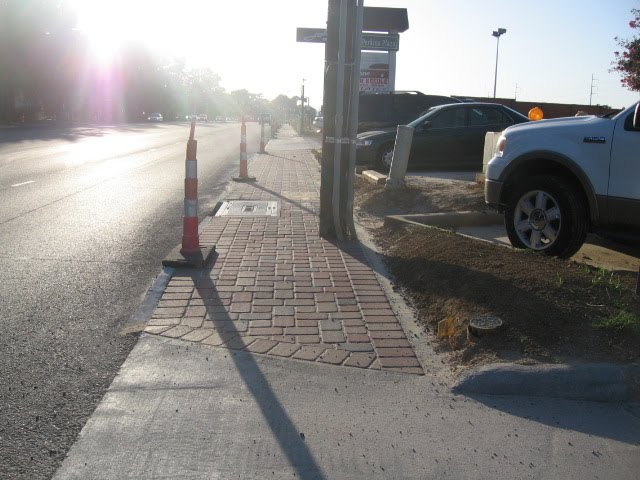 The area represents a banner opportunity for a developer with the right capacity for serendipity, due to a succession of previous events. 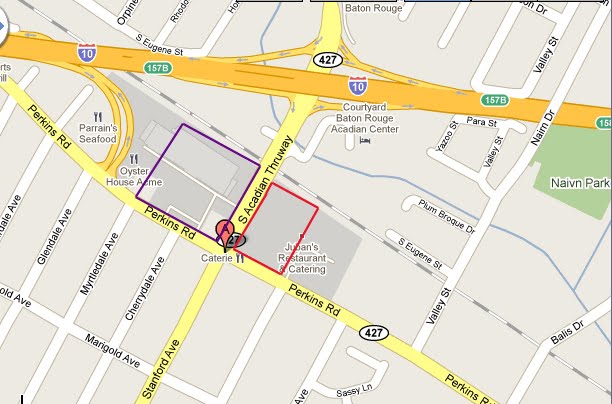 A Wal-Mart at the northwest corner (in the purple box) relocated a few years ago, and Commercial Properties Realty Trust proposed a mixed-use retail/residential node in 2008, which would most likely have percolated by now if the lending climate were better. And then, on the first of this year, a major fire burned a huge wing of the Acadian-Perkins Plaza across the street, particularly the portion encapsulated by the red box in the above map. This fire has impelled the owners of the plaza to rebuild in a way that might harmonize with whatever lucrative redevelopment ultimately takes place on the old Wal-Mart site. The area will most certainly elicit something exciting before too long; the intersection sits near the commercial heart of Southdowns, which hosts some of the metro’s most prominent nightlife just a few blocks away on Perkins Road. In addition, the development will be widely visible to thousands of motorists each day passing on I-10 just to the north of this intersection. This is hardly the place for a run-of-the-mill strip mall that might have worked in 1968—the new retail node will undoubtedly offer more than a standalone big box.

It should come as no surprise that the city’s Green Light Plan includes brick paving surfaces for the sidewalk element of the traffic improvements at this intersection. After all, the Southdowns is a confidently middle- to upper-middle class neighborhood hosting some of the most desirable real estate in the city. And, as paving surfaces go, brick surfaces nearly always appeal to American public far more than concrete. (The American aversion to concrete extends to housing: while concrete is a strong, resilient material used for housing across the globe as an alternative to expensive masonry, it obstinately refuses to catch on in the US. We often prefer brick or the much flimsier wood as the fundamental material. Perhaps the pathologicsal hatred we seem to have for Brutalist edifices has stymied our capacity ever to embrace concrete?) At any rate, brick surfaces are all the rage for streetscape improvements, especially in areas that hope to convey affluence or fashion, which the Southdowns no doubt hopes to achieve. The pattern here isn’t particularly audacious, but it consists of a modified 90-degree herringbone pattern that alternates both rectangular and square bricks, all with slightly rounded edges. 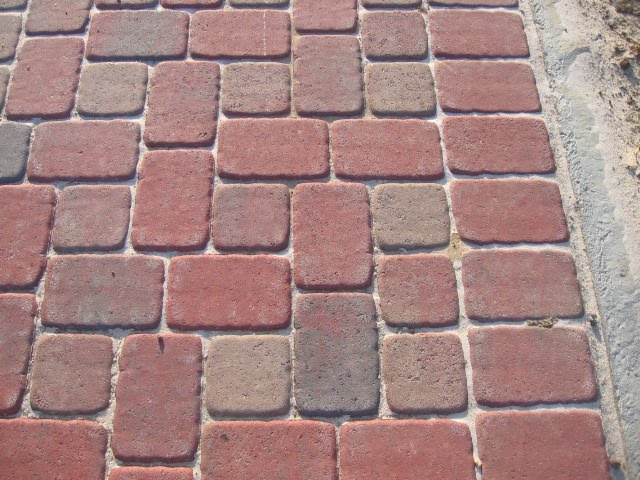 The header (perimeter) of the pattern achieves a mild contrast by relying solely on the rectangular bricks. 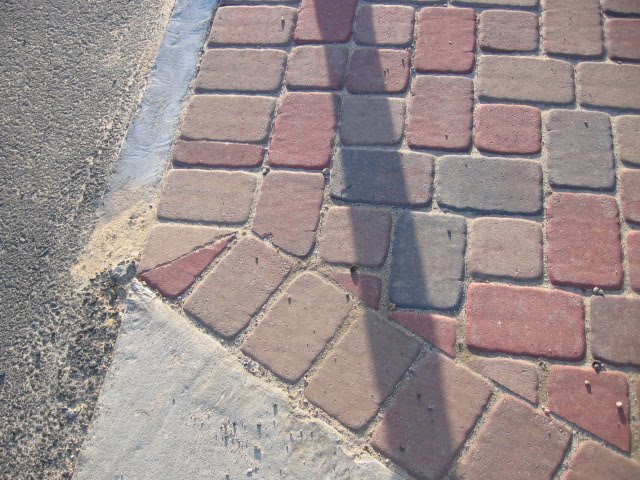 I have no doubt the proposed material achieved a favorable response among residents of the Southdowns neighborhood. But is it the best idea in terms of universal design? Not so long ago, I worked for a pedestrian advocacy organization, which released a special design review encouraging the abolition of brick pavers in the city. In this litigious society, safety is critical, and bricks are unambiguously more dangerous than many other paving materials.

Reflecting upon the sidewalk design, the reasoning is quite simple: bricks have far more interstices than concrete slabs, and a high interstitial density invites more chances for protrusions, as pavement expands and contracts with the vacillating temperature. Protrusions become obvious tripping hazards. A contrast is the aging brick pattern on a stretch of sidewalk in New Orleans, along Rampart Street at the edge of the French Quarter: 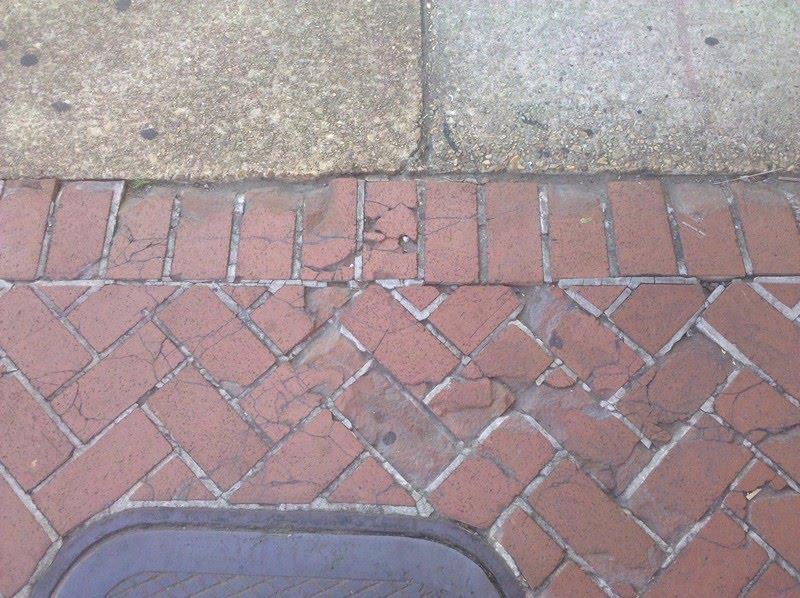 The design employs 45-degree herringbone pattern with 90-degree contrasting header, but many of the bricks and the mortar are fragmenting or have eroded in comparison to the adjacent concrete. The surface is uneven: 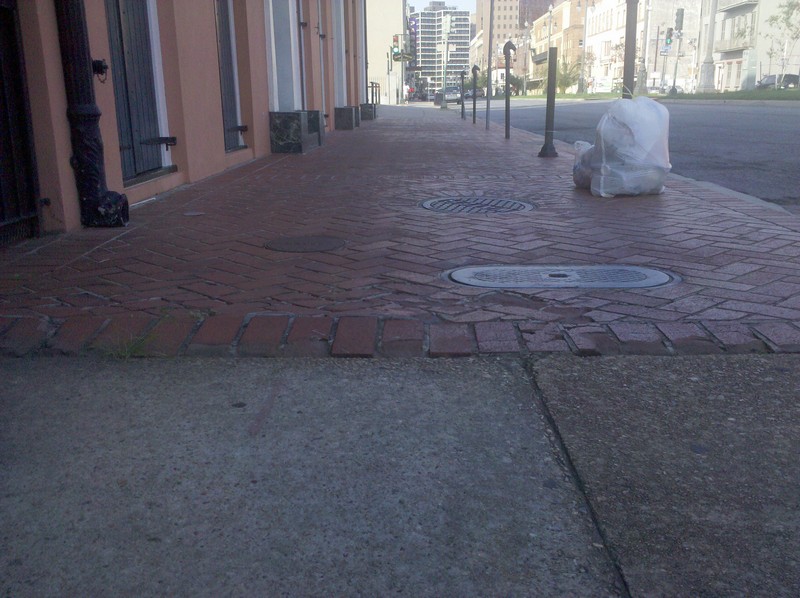 Not terribly bad right now, but it will continue to deteriorate, and the number of repairs increases in direct proportion to the number of interstices. More gaps equals more opportunities for failure, which equals more issues to address and a higher aggregate replacement cost. 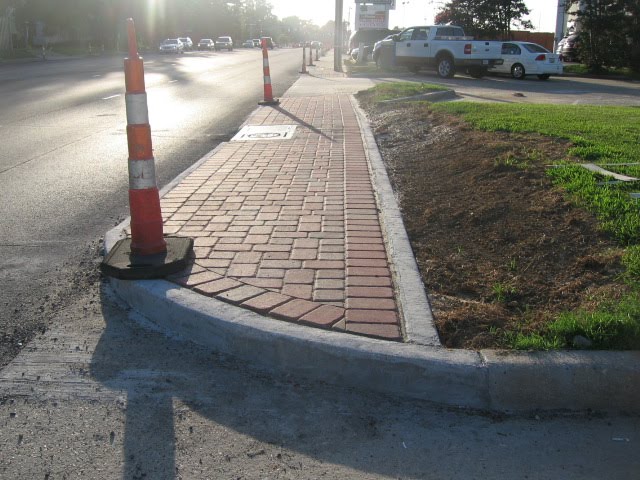 Unsurprisingly, what proves treacherous for pedestrians is equally problematic for wheelchairs. Bricks can cause a very bumpy ride. While most of the Perkins Road improvements at the Southdowns are carefully ramped or sloped at the curb cuts to allow wheelchair access, not all of them are:

It amazes me that, at the 20th anniversary of the Americans with Disabilities Act, such a design escapes the scrutiny of the public works department. My suspicion is that it will be replaced before long, and at a far greater cost than it would take if it were mere concrete. But then, concrete is ugly and prosaic—just look at the sidewalk 50 feet away on Perkins Road, where it has not received the upgrade. 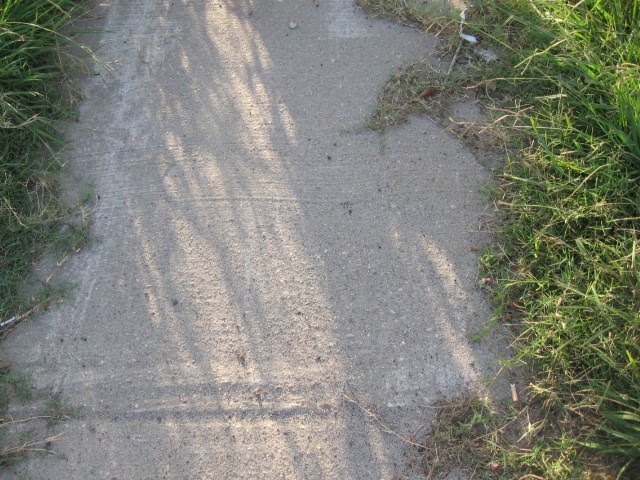 For all its blandness (and this is clearly not a well-maintained sidewalk), the opportunities for uneven paving surface to emerge are much lower here than the bricks. Cement undoubtedly degrades over time, but which portion of the sidewalk here is likely to require greater investment for maintenance over the long term? Which material is likely to suffer the most from any deferred maintenance? I hate to be critical of something so seemingly petty, so I will conclude this post on a more positive note, with examples of pedestrian paving that can still achieve a desirable aesthetic effect without eliciting the same investment cost or potential for injury. 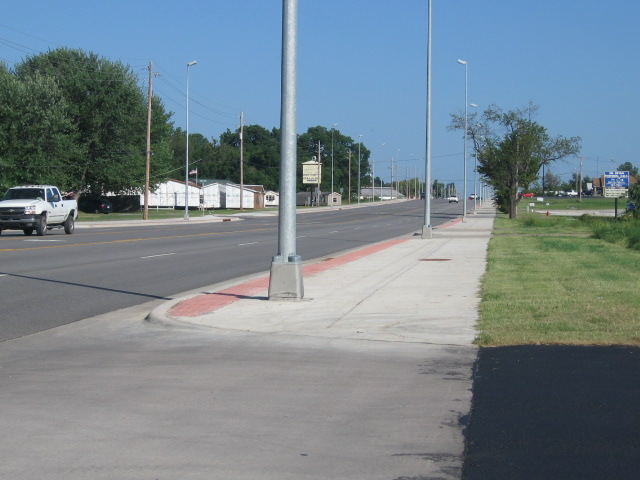 This sidewalk upgrade over a significant stretch of U.S. Highway 59 in Grove, Oklahoma, provides an excellent contrast.  Though purely middle class, the area undoubtedly hopes to attract those seeking vacation homes, since the community rests between various inlets of the vast Grand Lake o’ the Cherokees—a favored locale for sailboating and bass fishing. The color of the concrete here—as well as the unweathered metal of the streetlights—suggests that suggests these pedestrian improvements for the five-lane highway are recent. The brick headers immediately abutting the curb on an otherwise cement sidewalk achieve much the same effect as an all-brick sidewalk, but with far reduced risk of creating a tripping hazard. The red provides a contrast to the neutral grays of both the asphalt road and the cement sidewalk, resulting in a sort of “accent” that makes the sidewalks seem less utilitarian and more decorative. The fact that the bricks line only a small sliver of the sidewalk closest to the street—the portion least likely to be walked upon—helps to minimize the potential for a tripping hazard.

Baton Rouge offers an alternative in a portion of the well-used City Park. which seems to work much better than the new Perkins Road installation. 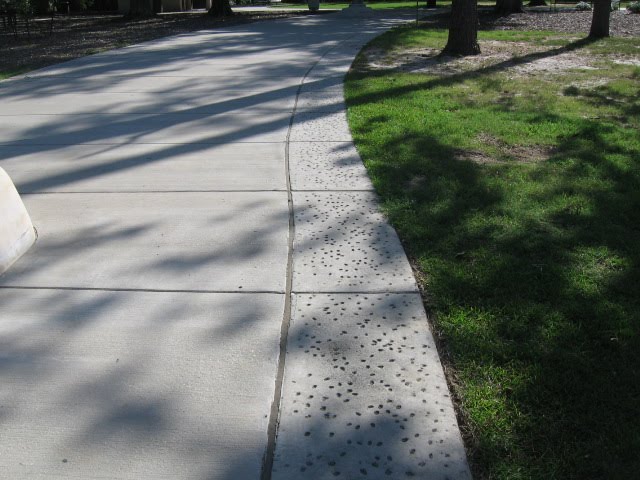 Interstices are minimal here, and yet the cement paving at the headers along the two narrow borders has a different texture. What causes all those strange speckles? 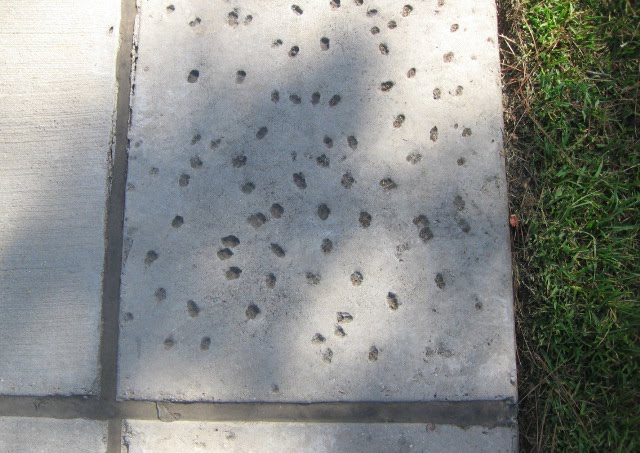 I’m only guessing here, but I think they are acorn droppings from the live oak trees that canopy much of the park. One can discern the vaguest outline of an acorn shape. 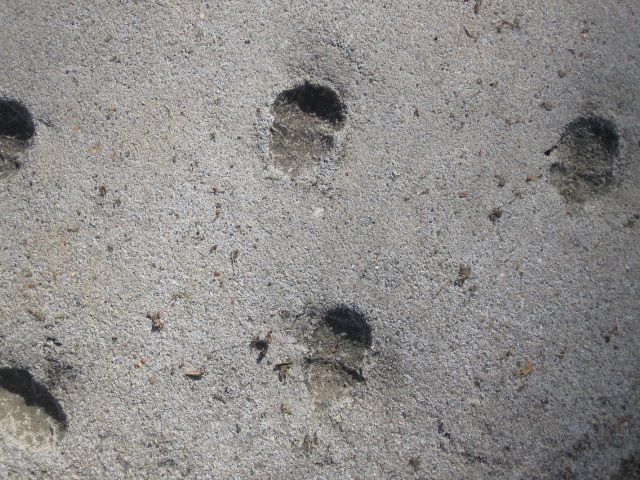 Did the Parks and Recreation Department deliberately time the laying of the concrete for these headers so that it would solidify at the peak of the acorn season, allowed the acorns to drop naturally and decorate the concrete with imprints? I think it was a bit more artificial of a tactic: the acorn imprints appear too evenly scattered across the headers. But it offers a creative solution that most likely cost virtually nothing extra. Though it may not evoke sophistication in the same way that bricks do, it endows the sidewalk with distinction and is much safer for pedestrians, particularly in an area that welcomes a fair number of joggers.In addition, the shallow root system of live oaks is notorious for shifting and destroying the evenness of paving surfaces. Bricks would be a disaster here within just a few years.

Have no doubt that I recognize this subject is small potatoes when placed in the context of other, more widespread urban concerns. But to dismiss sidewalk tripping hazards completely is unfair, when many have suffered injury from poor paving surfaces. The alternatives in Oklahoma and City Park prove that creative design can reconcile the age-old dichotomy between aesthetics and functionality. They also provide a fresh spin on the notion that necessity is the mother of invention: cutting budgets is particularly laudable in times of scarcity, and sometimes the cheaper, lower-maintenance alternatives can offer fresher designs and appearances, while the reduced elaborateness can improve safety. It’s a triple win, without a single skinned knee or sprained ankle in the process.

PrevMONTAGE: The Main Street of America goes Kansas.
Rolling back the pages of mega-retail history.Next