Occasionally—maybe even frequently—I am apt to represent something incorrectly in one of my blog entries. While the underlying claim to most of my posts is an analysis based on observation and opinion, the road to my final destination is always paved with on-the-scene reports, research, or even press releases, and sometimes it is based on interviews and hearsay, particularly when I haven’t had the opportunity to visit the site in question. More often than not, a single newspaper article or scholarly journal elicits links to other articles and journals, and it isn’t uncommon that one of these outside sources may contradict another. Before long, the swirl of conflicting details nestled within these secondary sources exponentially increases the amount of time I devote on a single blog post. Needless to say, I can get bogged down on certain details that may very well be certifiably incorrect.

So I thank a recent reader for pointing out to me that my diagrams illustrating the site selection history for the new Evansville arena were a bit off. I blogged extensively (in three parts) on this subject a few months ago, critiquing the rationale behind the decision to demolish a block of old commercial buildings on Evansville, Indiana’s Main Street in order to make room for this new sports venue. Unfortunately, my illustrations didn’t quite get the original recommended site correct—the one announced prior to the Main Street demolition. I had one of the two blocks right, but my diagram gets the configuration aligned the wrong direction. It was tricky finding an accurate rendering or site plan of this rejected site for the arena, but a reader helped point me out to it. Since then, I have corrected my illustrations and, ideally, the three-part article on this arena—now fully under construction—should be free of graphic goofs.

Another situation which I have recently encountered is when an actual development proceeds in a manner contrary to my own research and writings, through no fault of my own. Quite simply, the development does not materialize according to the publicized proposal from which I based my blog entry, and, given the nature of the economy at the moment, it usually means a downgrade. Several months ago I wrote about what I called “Retroactive Land Banking”, and I used an example in Bloomington, Indiana of several structures sitting vacant on the principal commercial street, Kirkwood Avenue. These vacant buildings were hardly a product of blight or disinvestment—they involved an incremental assembly of adjacent parcels, in order to demolish and build something new. At the time, the plan involved the redevelopment of this row of squat buildings into something more ambitious: 120 Kirkwood, a 4.5-story LEED certified condominium complex with retail on the first floor. While the website for 120 Kirkwood remains active, the ambitions for the site at the ground-level seem to have retreated, based on a very recent visit to Bloomington: 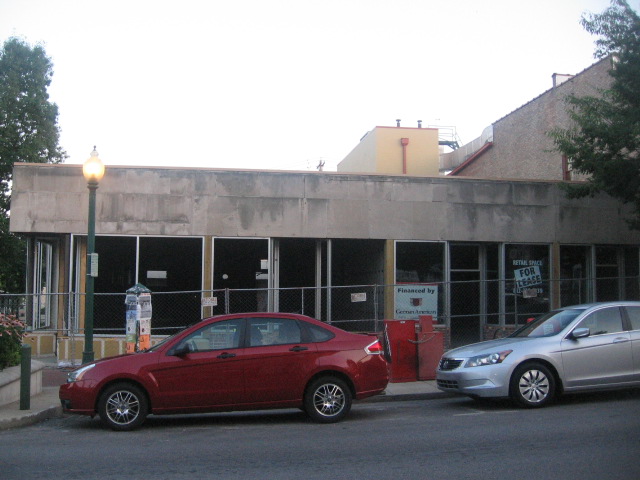 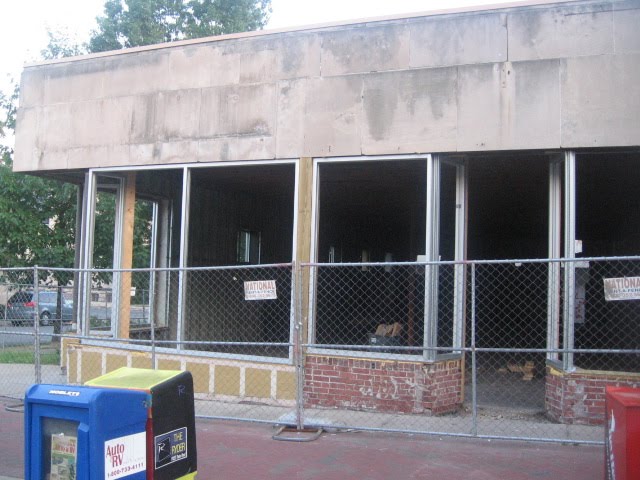 Bloomington redevelopment on Kirkwood is a downgrade – now just rehab 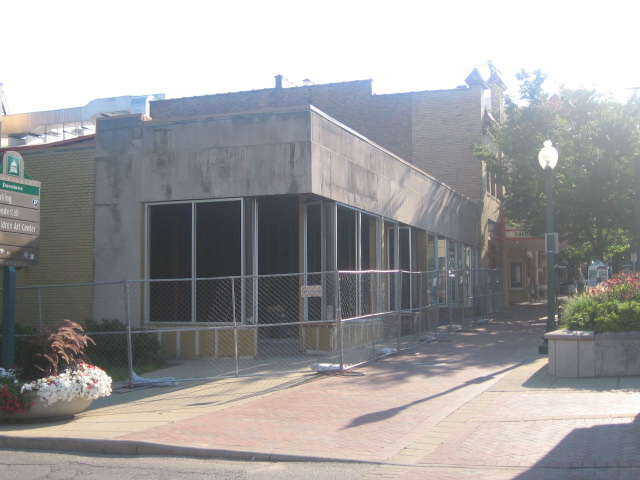 Now it appears the developer is simply renovating the existing structures for retail. No more condominiums; no more multiple stories.  A downgrade in the proposal.  This won’t be the first time the persistent housing slump has forced developers to renege on their original visions. (Nor is it the first time I’ve blogged about it.) Whether the Bloomington developer failed to secure adequate financing or couldn’t find enough jet-setters willing to make down payments for a unit (or both), the project now looks to involve little more than a face lift, which is hardly the preferred result of months or years of buying and assembling a row of parcels. It simply is not the highest and best use of the land permitted by local zoning ordinances and thus constitutes a downgrade. Maybe someday 120 Kirkwood will come into fruition; just two blocks down on Kirkwood, one other mid-rise condo complex is now under construction. And maybe I’m wrong in my speculation, and the project will eventually begin three stories of condo construction atop this one floor of retail. But the apparent current direction of this project only vitiates some of the claims I made on the original blog post, reinforcing the limitations of long-term planning in the face of an infinite number of contingencies—as well as the limitations of writing about these long-term plans in the face of such contingencies, which tend to make investors more risk averse, and risk aversion nearly always results in a downgrade from the original intent.

As always, comments are welcome on both this post as well as the revisions of the older posts.

PrevNot quite the corner store.
Suburban heaven may await, but you can’t take it (all) with you.Next