These lumps are always benign.

This blog post may be the closest I ever get to a real-time narrative. It’s not purely real-time, of course, any more than this is an online journal. But everything that this blog features occurred within the past few days, and fortunately I was able to document it photographically as I was experiencing it, including the crucial revelation at the end. I was driving from Monroe, Louisiana toward Little Rock, and, as anyone from these two states could tell you, there is not a single limited access highway or interstate connecting Louisiana and Arkansas. But if part of the goal is absorbing Americana through a camera lens, who wants to take interstates anyway? 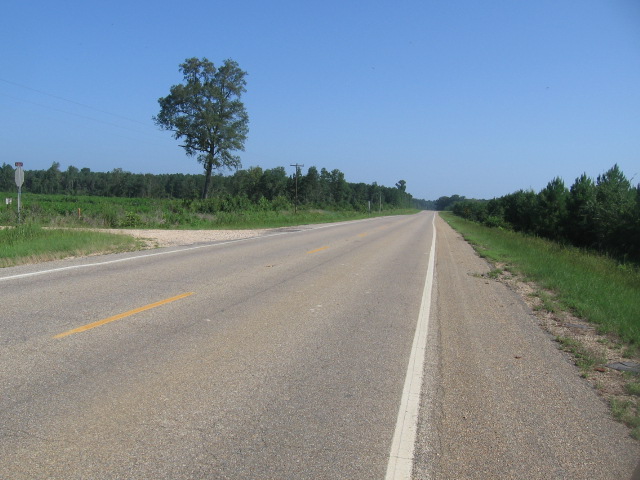 I was venturing northward toward Pine Bluff, Arkansas on U.S. Highway 425, across southern Arkansas’ flat and impenetrable pine belt, just south of the college town of Monticello. The photo above is hardly an anomaly for being devoid of cars: this was the norm, and ten minutes could easily pass before I confronted another vehicle. If my driving got a bit sloppy—as most of us are wont to do when the roads are this barren—I might skim over the yellow painted lane divider, when I would here the familiar pa-dump pa-dump pa-dump of those reflectors against my wheels. 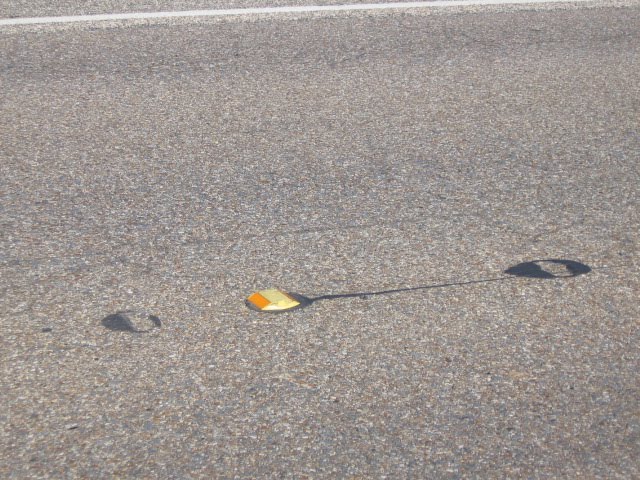 At any rate, it’s a familiar sound in a good part of the country, and apparently a common enough phenomenon that it approaches highway vernacular status. Facebook even has multiple groups devoted to people who try to avoid hitting them when they change lanes. I had learned several years ago that the patented design commonly employed in American highways is called Botts’ dots, after Elbert Dysart Botts, the California transportation engineer credited with their invention. However, this whimsical name often suffers from over-application, because Botts’ dots are a particular design rather than a general term—usually round and non-reflective, like the example seen in this photo. They serve as a purely auditory warning—for alerting motorists when they are crossing a certain threshold, usually a lane. Attempting to avoid them is fine—as apparently a few thousand Facebook users do—but it should not be done out of fear of damaging them, since the ceramic or polymer used in their construction can support the weight of a car. The square reflectors along this Arkansas highway also are made of a sufficiently durable material, meaning they serve a double purpose of providing both a lighted path at night and an audible warning at all times of day.

Despite the fact that US Highways and interstates receive federal funds for their construction and continued maintenance, not all roads are created equally. A major American highway can bisect several states and morph considerably along its trajectory—quite often these shifts are obvious when crossing into a new jurisdiction, such as a state or county line. Differences in soil quality, topography, climate, and jurisdictional road safety laws add variety to any transcontinental thoroughfare, and these pavement markers are no different. Departments of Transportation can clearly decide which safety features are most critical in their jurisdiction. In south Arkansas, square reflectors and Botts’ dots can protrude from the pavement: 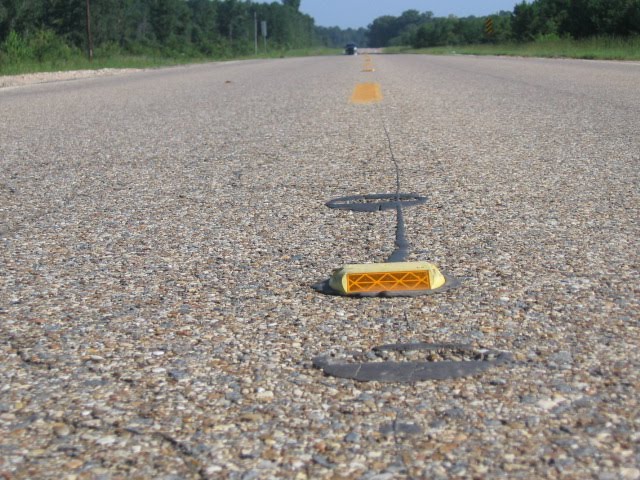 As suitable as these devices are in an arid climate like southern California, they don’t work so well in upstate New York, or any part of the US that ever receives heavy snowfall: the plows would scoop these critters up. If Botts’ dots can exist at all in the North, they must be recessed in the pavement and further reinforced. I cannot provide a firsthand auditory comparison right now between protruding and recessed reflectors, because I haven’t been in the Frost Belt in awhile. But I suspect the trademark skip-thump sound would have to be muted if the device cannot protrude as much.

Later that same day from which the above photos were taken, I had to head westward from Little Rock along Interstate 40. By this time, it was pitch dark, and I have never felt so nervous about driving on an interstate in my life. I couldn’t pin it down at first, but something about this stretch of highway winding through the Ozarks induced anxiety. Eventually I realized that a number of features were missing that I often had taken for granted. This portion of the Arkansas interstate does not in general use street lights at exit ramps. It has relatively few billboards–or, at least, very few of them are illuminated. Only a few communities between Little Rock and Fort Smith have more than 10,000 inhabitants, so there’s no ambient light from a neighboring community. But perhaps most critical, the center lane lacked any square reflectors. No reflectors in general—not on posts, not embedded in the pavement, and relatively few green reflective signs. It was dark. Clearly a driver’s headlights should compensate, but they only provide illumination for 50 to 100 feet or so. Driving that night through western Arkansas, I often couldn’t tell if the car in front of me was just turning to negotiate a curve or getting off at an exit ramp. These reflective squares critically promote safety because they show the trajectory several hundred feet ahead of the driver, allow him or her to prepare for curves. The only way I could anticipate curves that night in Arkansas was by turning on the high beams, which is rarely permissible because traffic is much higher here than US Highway 425. Thus, a rarely traveled fragment of highway in the rural southern part of the state offers a better reflective environment than the interstate connecting Arkansas’ largest and second largest cities…thanks in no small part to Botts’ dots.

But why would the state’s Department of Transportation choose to use federal funds for reflectors on one highway but not the other more traveled one?  Why snub interstates in Arkansas? My return trip during broad daylight (I wasn’t going to try that route again at night) provided the most likely answer: 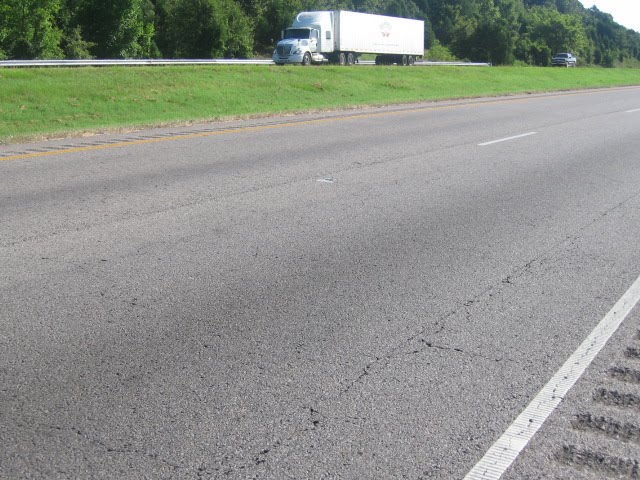 In the near exact middle of the above photo, before the white stripe marking two different lanes, is a small indentation. I got as close as I could with my camera, given the high speed and frequency of cars passing by. 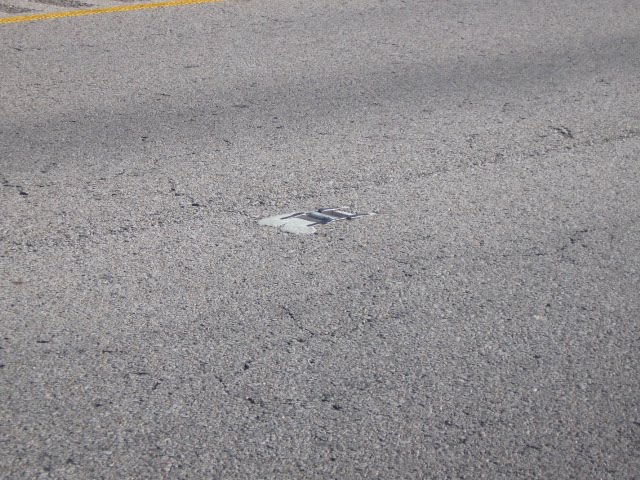 It almost looked like a scar where the reflector should be. But why is that reflector missing? Is it possible that the DOT, assuming that central Arkansas’ climate is warm enough, allowed the reflectors to protrude just as they might in Arizona or southern California? And could this have been the critical mistake that seriously deteriorates the safety of this Arkansas highway at night? Central Arkansas most likely does not endure heavy snowfall very often at all. But at one point, it did, and the necessity for making the road remotely passable by employing snowplows superseded the preservation of protruding square reflectors, Botts’ dots, or whatever they had once used here. They’re all missing. Just looking the other direction reveals the same scar where something clearly should be; it was snatched by a snowplow. 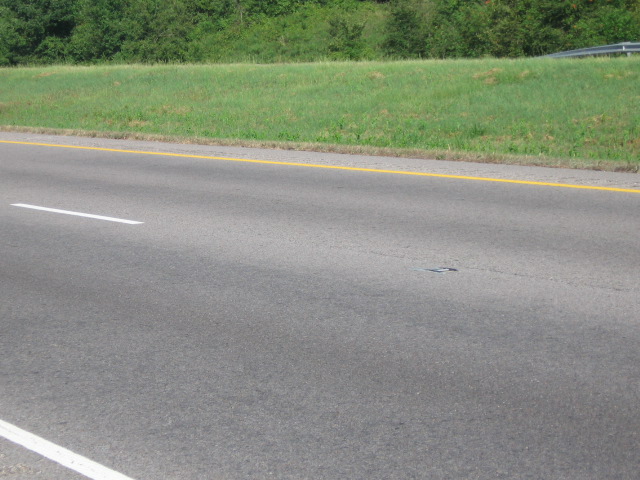 I could be wrong of course, but I can think of no other reason why this heavily travelled transcontinental highway would lack them. (The small patch of I-40 that I traveled in Oklahoma lacked them as well, but at least Oklahoma’s exit ramps had streetlights. Maybe the two states suffered from the snow pattern.) It would be interesting to determine if there is a comparatively higher crash rate on Arkansas interstates due to unsafe night driving conditions—if that would justify the cost of re-installing these reflectors, which apparently need to be recessed into the pavement to handle the occasional heavy snowfall that Arkansas might receive. The current state of the road’s safety hints at the broader dilemma: if the federally funded highway network required complete uniformity of design, with every state using its funds for the highest caliber safety infrastructure, this might not have happened. But a one-size-fits-all federal standard could scarcely account for the climatic and topographic diversity of this vast country, so it would elicit new problems for regions that simply defy any criterion. It would be tough to deny that Interstate 40 in Arkansas needs better visibility at night, but the means of achieving this through the federal funds allotted—whether routine improvements, transportation enhancement grants, or some other untested improvement—rests upon each state’s decision making authorities. Botts’ dots originated through one state’s pursuit of new solutions to localized road safety concerns. Perhaps those bizarre indentations on I-40 are the installation mechanism for a solution unique to the Arkansas Department of Transportation.

PrevIn an economic hell, a house is but a shell.
MONTAGE: The Main Street of America goes Kansas.Next

9 thoughts on “These lumps are always benign.”