Suburban heaven may await, but you can’t take it (all) with you.

The decentralization that has virtually turned our cities inside-out over the past 60 years continues, for the most part unabated. Throughout the country, it’s not difficult to spot the aftermath of this outward migration, in the moribund downtowns and impoverished urban neighborhoods that it left in its wake. That many central business districts are visibly revitalizing might very well augur a collective, sustained interest in classic urban form, but the fact remains that in almost every major American metropolitan area, the fastest growing quarters are the counties that contain the exurbs. Repopulation of city centers still pales to the rate of outmigration, or of migration from one metro to another—most frequently hopping from exurb to exurb.

But in the past thirty years or so, we have discovered that our cities didn’t die merely because the building stock fit into a outmoded configuration we generally call “urban” (though it is often a pejorative), or because the Federal Highway Administration built limited access freeways from the countryside directly to the historic center. Americans didn’t flee Detroit, Philadelphia, and New Orleans simply because their very “city-ness” made them inherently, incorrigibly bad. No, the cities began to suffer from the outmigration to the suburbs, and now many suburbs suffer from further outmigration to more distant suburbs.

These suburban environments can assume a variety of appearances—in the Northeast and Midwest, they frequently are almost as densely populated as the central city, with a walkable, streetcar-oriented configuration. In the more youthful cities of the South and West, these older, shrinking settlements may look just as auto-oriented and suburban as the brand new developments popping up on the outermost fringes. They might not even be all that old. Such is the case in Baton Rouge, a metro well below one million inhabitants that has relatively few separate municipalities within its sphere of influence, so much of the suburban development still rests squarely within the city limits. This sad little community shopping center on the far east side of the city provides a simple example of the continued push away from the old center. 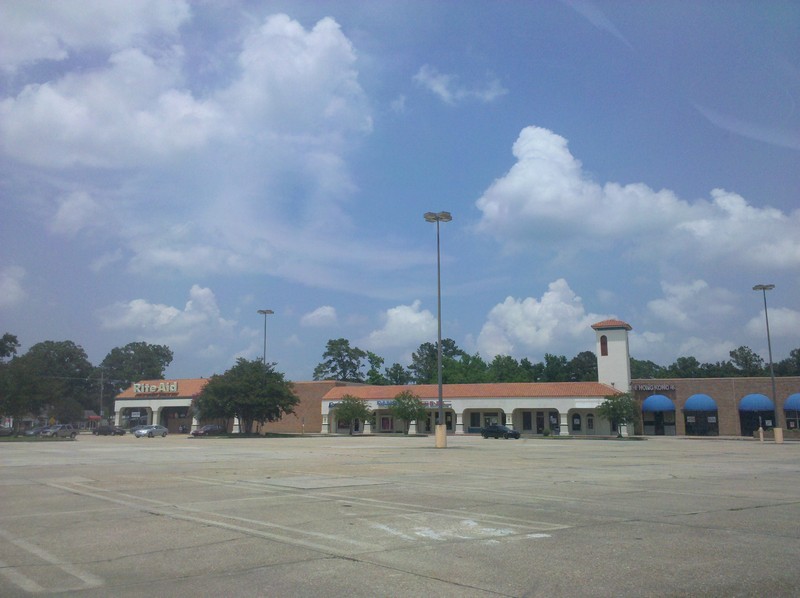 The homes in surrounding neighborhoods are generally in good economic shape, and appear unquestionably middle class. But, unless appearances deceive me, they largely date from the 1960s and 1970s, which makes them comparatively old to the rapidly growing exurbs in adjacent Livingston and Ascension Parish, just a bit farther to the east and southeast. And the rental units in this area show clear signs of economic distress: the run-down appearance of the apartment buildings nearby indicates that they long ago ceased being marketable to the middle class. Most likely many of them are Section 8, federally subsidized properties. Thus, the neighborhood, while stable in appearance, has already shed its middle-income renters as well as a number of the retail tenants who might otherwise have leased space at this shopping center. The remaining homeowners, already living in an auto-oriented community, no doubt have gotten used to the mild inconvenience of having to drive out a bit further to go shopping.

I’ve discussed this trend numerous times in the past: retail is particularly sensitive to economic shifts, and rental units tend to deteriorate far more quickly than owner-occupied homes, due largely to the absence of an incentive among tenants to maintain the interiors. I hardly want to dwell on the negative yet again. So let me return to the above photo and pivot a bit to the right to observe a creative tenant within this otherwise struggling little shopping center.

The largest storefront—the anchor tenant—clearly used to be a supermarket, and now it is an off-site storage facility. Perhaps I haven’t got out in the world as much as I’d like to think, but this is the first time I’ve seen this. What most likely used to be an Albertson’s or Piggly Wiggly or a Matherne’s (not a Winn-Dixie because there’s one of those just a mile away) has managed to find a new life, giving this strip mall a much higher occupancy than one might expect. Only half of the adjacent smaller, in-line stores have tenants, but in terms of overall leasable square footage, this shopping center is probably about 75% occupied.

Yet, like a deceptively well-leased center on the south side of Indianapolis, the plaza still appears pretty dead. The absence of cars exerts a staggering impact on the shopping center as a whole, hindering the property manager’s ability to attract new tenants to fill the smaller storefronts. If the anchor tenant were a grocery store or some other “category killer” (a pet superstore, hardware shop, or arts-and-crafts emporium) it would no doubt stimulate the sort of ingress and egress to the parking lot that smaller tenants would find attractive. But off-site storage does not attract routine customers once a week like a grocery store would—perhaps not even once a month. The management at Miller Village is undoubtedly hungry for any tenant it can find, and The Storage Center responded to the call. While the physical condition of the plaza is satisfactory, the other common space shows further evidence that the whole place has slid to a low-rent status: the parking lot is unlandscaped, and the sign along the nearby collector streets has clearly seen better days. 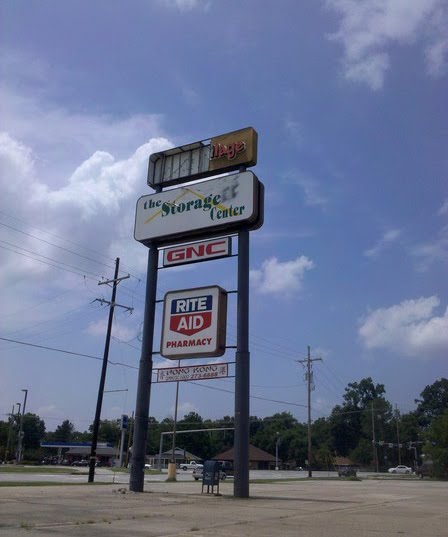 This shopping center represents a different sort of decline representative of decentralization. The surrounding neighborhood may not be premier but it remains mostly middle-income, which is reflected in the absence of stores most typically seen in lower-income communities (pawn shops, payday loan stores, etc). But it can’t entice good tenants because, like an aging apartment complex, the management has failed to renovate to keep up with the shiny competition in the exurbs further east.

Shifting consumer trends and continued decentralization suggest that we will witness a growing array of tenants such as The Storage Center occupying spaces held by former grocery stores. A quick analysis from both the service provider and the service buyer provides ample evidence. From the service provider’s perspective—that is, the companies offering secured off-site storage, the goal is simply to find a large parcel at low cost. It is amazing how versatile these companies are in terms of site selection. They’ll go anywhere. Quite often they’ll choose ungainly, oddly shaped pieces of land wedged between a highway and an interstate exit ramp—unattractive parcels for homes or most retail and frequently confusing to access, so they remain relatively cheap. However, they are highly visible to passers-by, and the company itself does not need the space to be appealing—in all likelihood it will remain empty much of the time. In order to keep the operational costs low (most monitoring takes place through cameras rather than 24-hour security personnel), it is best for companies such as this to find the cheapest land available. It could even sit in a reasonably rough neighborhood: as long as it is secured, it will most likely find customers willing to use the space.

From the service buyer’s perspective, need for off-site storage has continued to grow astronomically over the past few decades. It is hardly an unfair generalization on my part, but lets face it–Americans have tons of stuff. The difference is that, while our number of possessions continues to grow, the median home size has flattened and possibly even shrunk for the first time since record keeping began. The current economy puts a further crunch, as people forced to downsize through foreclosures but unwilling to sell some of their most prized possessions must find a safe, climate controlled space for storage. Thus, the demand for these facilities may be reasonably elastic, if not even inversely proportional to the health of the economy.

I have never seen an off-site storage company lease space prior to this shopping center in Baton Rouge. Usually they build on their own on land that they have presumably purchased. But this shopping plaza provides the bricks and mortar, perhaps at a higher quality than the structures normally used for off-site storage, and it can easily achieve climate control. The virtual absence of windows means the space is relatively easy to secure. This creative use may very well embody the future of grayfields—long-vacant retail structures that formerly housed big-box tenants. The Storage Center might be coming to a vacant former Wal-Mart near you, and even if hardly enlivens the parking lot (or diminishes the blighted appearance), it’s still keeping an otherwise obsolescent shopping center in viable commerce.

PrevUpdates and downgrades.
REWIND: From Silos to Steeples, Painting the Town Green.Next

7 thoughts on “Suburban heaven may await, but you can’t take it (all) with you.”