Not quite the corner store.

By this point, you’d more or less have to depend on a private jet for transport not to encounter the occasional—or frequent—dollar store. No longer just the mainstay in communities with a median income below the national average, the ultra-bargain store is one of the few retail segments that has done not just well during the prolonged recession, it has flourished. While many other retail chains have slowed or halted expansion—if not cut back on their outlets or declared bankruptcy—brands like Dollar General, Dollar Tree, and Family Dollar are blooming as though these are the best of times: grand openings, relocations to bigger sites, and remodeling of existing stores. As the above-cited New York Times article from 2009 observed, the dollar store chains have been negotiating cheaper rents in increasingly lucrative shopping centers, because property managers are seeking robust vendors to fill their growing vacancies.

Unlike the titan of low-cost retail, Wal-Mart, most dollar stores have expanded with relatively little controversy or objection. Since they tend to operate at about one-tenth the leasable space of a Wal-Mart (approximately 20,000 square feet), the aggregate impacts are considerably smaller: less induced traffic, less pervious surface, less of a sweeping array of merchandise that promises to compete with every other mom-and-pop retailer nearby. Their inherently smaller footprint and willful scalability make them incredibly versatile and adaptable to almost any milieu, from suburban strip malls, small town Main Streets, pedestrian-oriented urban neighborhoods, or greenfields. Clearly they assess a community’s particular merchandising needs and the per-square-foot costs of leasable space (or vacant land), then populate their stores accordingly. They have expanded quietly and discreetly over the past 20 to 30 years, to the point that the aforementioned Big Three dollar store names now collectively number over 18,000 locations, compared to Wal-Mart’s mere 5,000 or so. Wal-Mart’s comparatively modest expansion plan generally targets markets adjacent to a smaller city of 10,000 or more; dollar stores wouldn’t hesitate to locate in a town of 500. And while one might easily speculate that the announcement of a new dollar store would raise a kerfuffle in an affluent neighborhood, the CEO of 99 Cent Only recently reported the company’s highest-revenue store is on Wilshire Boulevard in Los Angeles, right next to Beverly Hills.

Though hardly loved by everyone, the dollar store is almost equally universally not hated—and that might be its true competitive advantage. As flexible as the retail niche may seem, it hardly makes willy-nilly expansion decisions. If it does decide to locate in an upscale suburb, rest assured that it will first seek out properties the most affordable leases in that community. And if a discount retailer seeks a more urban location, such as the working class near-southside of Indianapolis, it will make a long hard decision of the perfect nook within the neighborhood. Take this relatively recently opened Family Dollar at the intersection of U.S. 31/Madison Avenue and Troy Avenue: 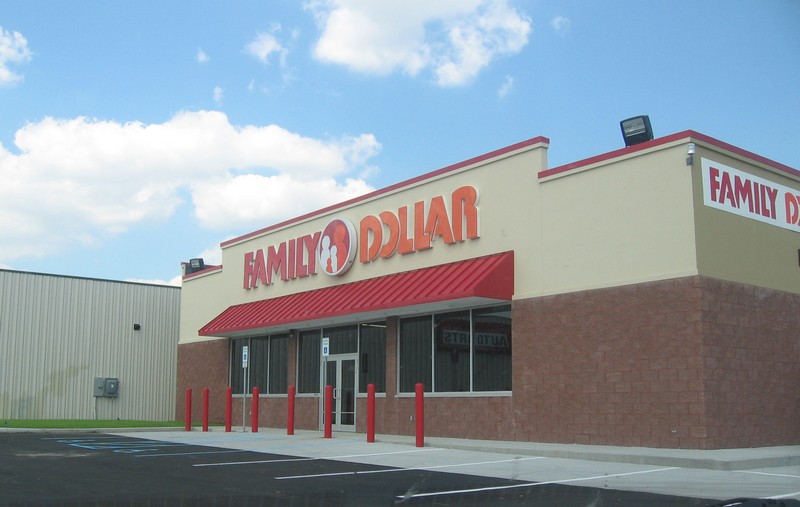 I’ve written about this part of the city several times before, whether it involved a strange house retrofitted with a retail storefront , or the long enduring K-Mart just down the street. It essentially involves a busy six-lane highway with auto-oriented retail grafted onto some much more walkable adjacent urban neighborhoods (Garfield Park, Bates-Hendricks, South Village). Little historic storefront architecture remains in this area; it is—dubious whether there was any there to begin with—and Family Dollar apparently decided the incomes were modest enough, and the land was cheap enough, that they could justify installing a large, brand-new floorplate at a well trafficked site, rather than a leased out space in an existing strip mall. Thus, we see new construction in an area where little else dates after 1960. But the expansion strategists at Family Dollar made one other clever decision: they avoided the exact corner, as evidenced from the two photos below. (The second picture is a view from the Family Dollar parking lot, looking southward toward the corner parcel at that intersection.) 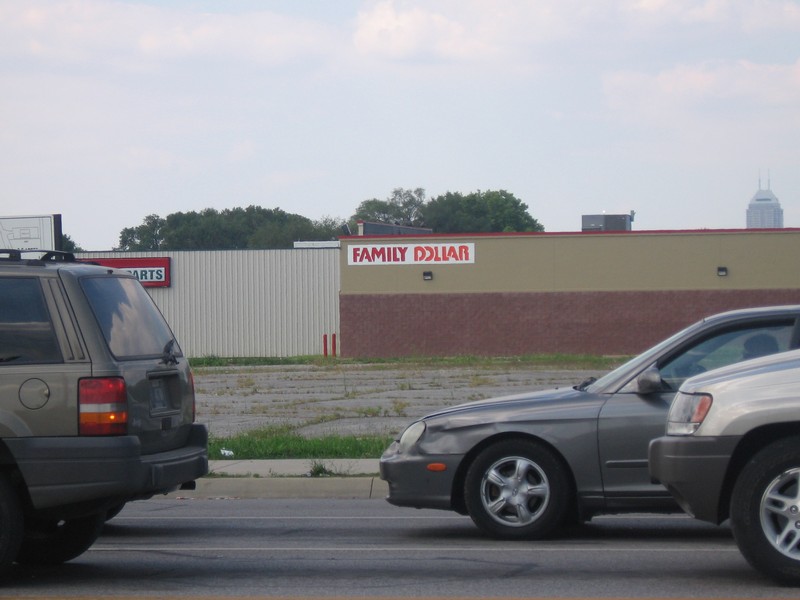 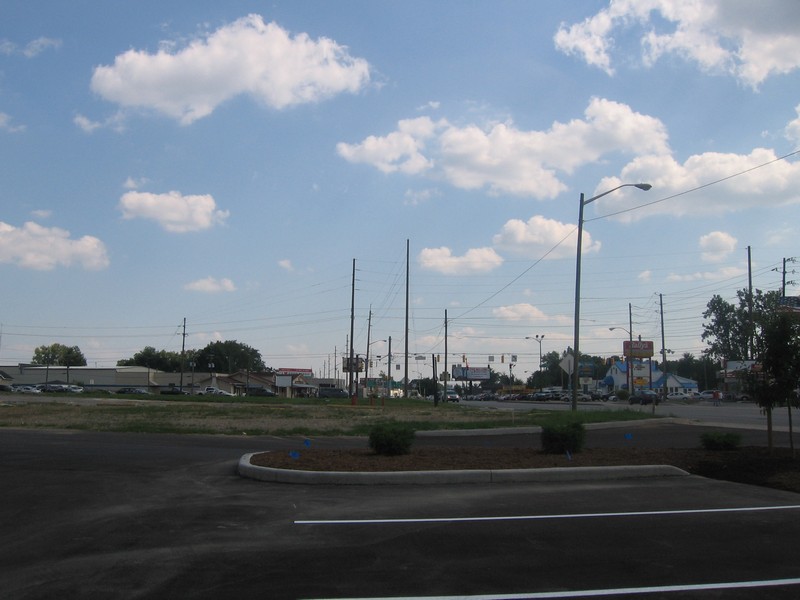 Corners are the prime real estate, even in depressed markets; the corner here would still cost relatively more than anything else around it. While Wal-Marts don’t hesitate to find the most visible patch of land for a new supercenter, even if it costs considerably less if they build 500 yards away, dollar stores routinely avoid locating at corners, particularly when they have decided to incur the cost for new construction. Of course, one can find exceptions to this rule as with anything else, but Dollar Stores routinely eschew street corners. Take this example in the purely suburban setting of Denham Springs, Louisiana: 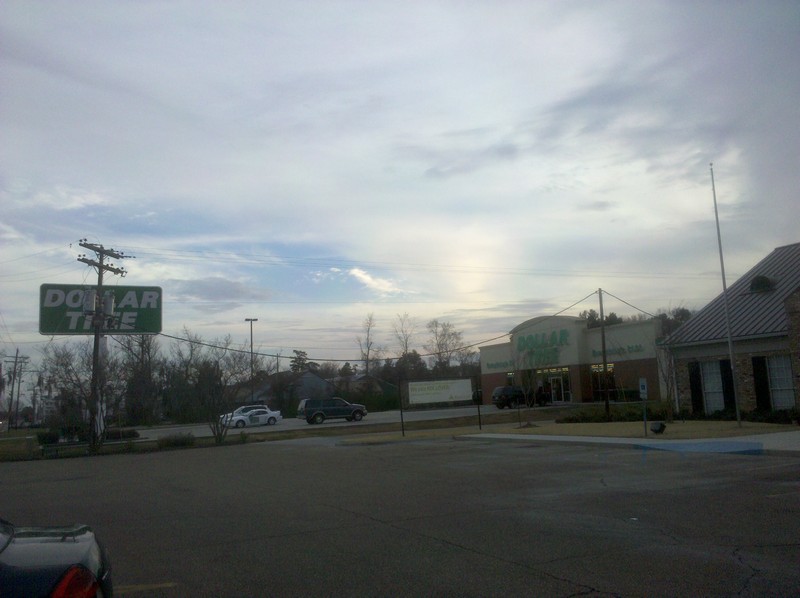 The Dollar Tree sits on the main highway, but one parcel away from a corner. I’m standing on that corner—in the parking lot of a bank. Here you can see where I was standing before: 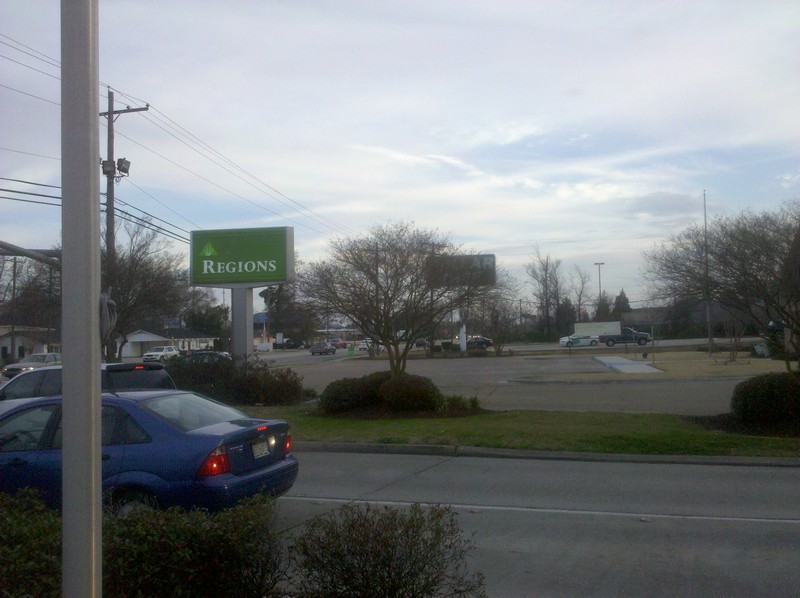 This example provides a further contrast from the one in Indianapolis because of the nature of the streets at the intersection. In Indianapolis, the Family Dollar rests three hundred feet away from the corner at a major arterial and an important collector street (Troy Avenue). In Denham Springs, the dollar store sits on one arterial, but the side street quickly devolves into a lesser local road, so the intersection itself—and its four corners—is far less likely to carry a premium cost in relation to the non-corner parcels. Yet Dollar Tree still sought a site that avoided the corner.

This phenomenon is equally visible in more rural settings, such as this one in Robert, LA, a sparsely populated stretch of Tangipahoa Parish—a part of the state that, as I observed recently, has in recent years become an aspiring bedroom community. 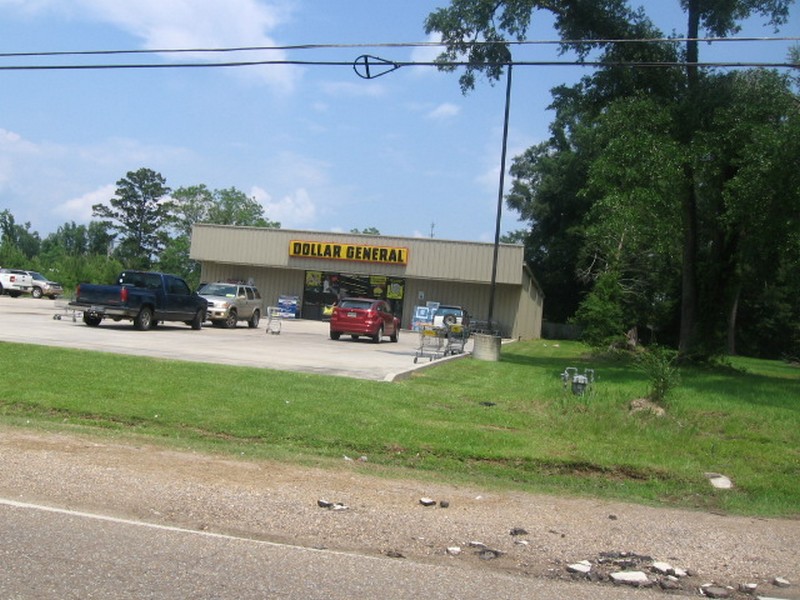 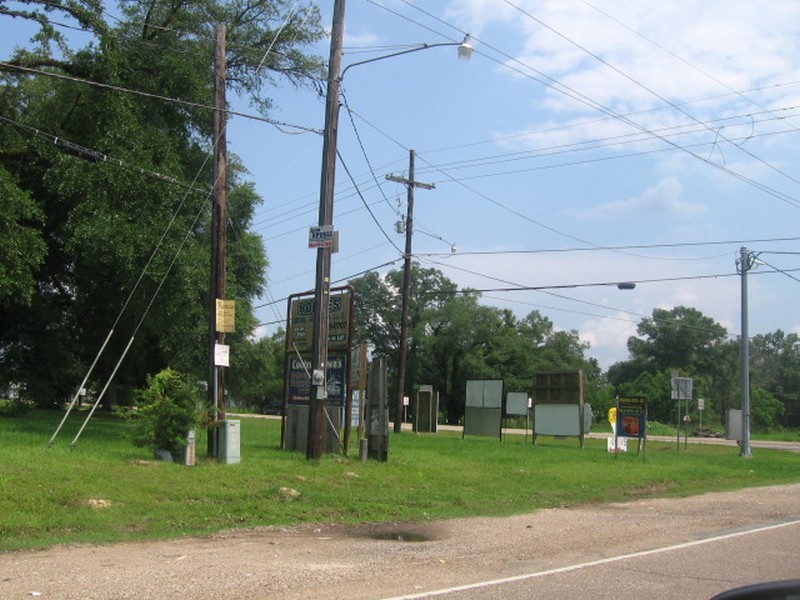 I took the pictures on the fly in a car, but the first shows the Dollar General in question; the second shows the large, sign-cluttered parcel that comprises the northeast corner of this intersection. Again, a free-standing dollar store, most likely built by the company itself, carefully avoiding the coveted corner parcel.

These omnipresent retailers are the closest apparent successors to the five-and-dime or variety stores from days past. Most of the earlier variety stores—familiar names like Woolworth’s or G. C. Murphy—are defunct. Others, such as S.S. Kresge and Walton’s Fire and Dime, shifted their merchandising focus in order to meet modern demands, and they became K-Mart and Wal-Mart, respectively. One notable company, S.H. Kress, went out of business in 1981 but lives on through heritage Main Streets across America, thanks to the architectural distinctiveness which its owner, bestowed upon the majority the company’s buildings. The old Kress logo is particularly noticeable throughout the South, where preservation efforts have been fierce to keep the structures viable and occupied.

Clearly the Dollar Trees, Dollar Generals, and Family Dollars have assumed a practice nearly opposite that of Kress—they tend to avoid anything resembling an architectural flourish when they build anew, instead resorting to cement block or corrugated iron, in order to reduce hard construction cots. Over the years, retail typologies have decentralized and diversified with the same intensity as settlements—gone are the days when American towns consisted exclusively of a grid network of houses, encircling a small but critical commercial main street. Five-and-dimes of yesteryear needed a corner parcel because it was among the few ways strategically to employ physical space for a competitive advantage. Everything pertaining to shopping was part of downtown, so a store with the most variety at the best prices should choose the most visible lot—as space in which urban street corners always won.

Conversely, the modern variety/dollar store has a far greater array of physical configurations from which to appropriate, so that premier corner parcel seems less the critical dealbreaker and more like an unnecessarily expensive patch of land. Why choose the corner parcel will the one right next to it has none of the confusion of ingress/egress for cars and the land is quite a bit cheaper? Dollar stores may continue to proliferate over the upcoming years, but their continued success may have less to do with belonging to a recession-proof retail culture and more with their consistent adaptability to perpetually diversifying American lifestyles. It doesn’t hurt that these companies know which lot to choose, and which corner to reserve for the inevitable Walgreens…or CVS…or Rite-Aid (a future blog post—I promise).