In an economic hell, a house is but a shell.

“Developers have to eat too.”

We have tacitly organized to demonize land developers for their perceived role in wrecking metropolitan America. Their greed often supersedes concern for the environment, they cut corners in construction quality, they cater to a lowbrow design culture—and these are just the criticisms chimed by many on the left. While the right may seem more sympathetic to role developers play in sustaining the construction sector, they often perceive the contemporary land development culture as relentlessly beholden to government hand-outs and tax abatements—that developers routinely eschew the free enterprise upon which they once thrived. Indianapolis’ Republican mayor Greg Ballard successfully ran a few years ago on a campaign of no tax hikes, and a goal to reduce or eliminate of the culture of tax breaks and assorted cookies handed out to the development community on the taxpayer dime. (Whether or not he has lived up to his no-new-tax campaign is open to dispute.)

The prevailing depiction of developers throughout popular culture is of unctuous hucksters whose venality destroys their scruples, manifested in their lack of empathy for the little guy. This of course is a generalization, but pop culture specializes in aestheticizing generalizations. Developers are the quintessential anti-populists, regardless of whether their average-joe victim fits the liberal or conservative paradigm.

So why not stick it back to them? Whether through impact fees, or the elimination of tax breaks, or even moratoria on development altogether, developers may be the easiest antagonist out of all the various players in housing delivery systems. Since they’re obviously loaded and care only about money, why force them to absorb all of the negative externalities that might accompany new construction?

It is no doubt this sentiment that impelled an instructor of mine to utter the quote at the top of this page. However much those in the real estate industry might view a project through the lens of the Internal Rate of Return, the “shoot the developer” attitude fails to take into consideration the tremendous number of players involved in something as simple as the birth of a small residential subdivision. From the equity partners to the banks that provide financing, from the general contractors to the architects and homebuilders, the aggregation of soft and hard costs foists a formidable weight onto developers to forge a variety of compromises, many of which chip away at their own revenue stream. Will they need a variance in order to pull off this project because of certain design idiosyncrasies that the public wants but zoning prohibits? Do local laws require the provision of a certain degree of affordable housing, and if so, how will they meet the funding gap? Are they required to meet certain standards in construction material or staffing? Are there potential environmental consequences to their project, or existing problems they must reconcile through the development process? Will any of these decisions affect the support they receive from equity partners or banks? And, once it all comes together, what if that poor, assiduous developer runs smack into the brick wall of an unfavorable market cycle?

Sure, I’ll confess that I’m providing a sympathetic counter-argument to defend developers. I know that a considerable number of them are very successful and extremely wealthy—but a poor mid-career decision could just as easily reduce them to bankruptcy. And while it often seems as though they are the true puppetmasters in most major alterations to the built environment, they are purely at the mercy of their clientele. If they fail to align with the will of the people—yes, even the little guy—they could be reduced to the change in their pocket.

One might think that the most recent real estate collapse would turn heads so that we could be a bit more sympathetic to developers. But I don’t think it has. The era of easy credit has elicited a lot of criticism toward banks, as well as a fair amount to federal regulators who fostered the sub-prime lending culture that saddled a huge number of Americans with mortgages they could not possibly afford. We’ve read about the biggest casualties: the homes in Detroit worth less than a car, the assembly line of empty, foreclosed homes in brand-new developments in metro Las Vegas. The aforementioned long-struggling motor city and its mega-booming sinful counterpart offer extreme examples, but what about the status quo? Charlotte, an archetypal sunbelt boomtown, was badly hit by the collapse of some its regional banks, and now faces insta-slums in some previously routine middle class developments on the purlieus. This article may offer a bit of hyperbole but Charlotte was a solid growth city that did not hedge its real estate fortunes and municipal budgets on a housing bubble the way Las Vegas did—it enjoyed a seemingly robust but diversified growth pattern that many other cities would have killed for.

The same might be said in recent years for Baton Rouge. 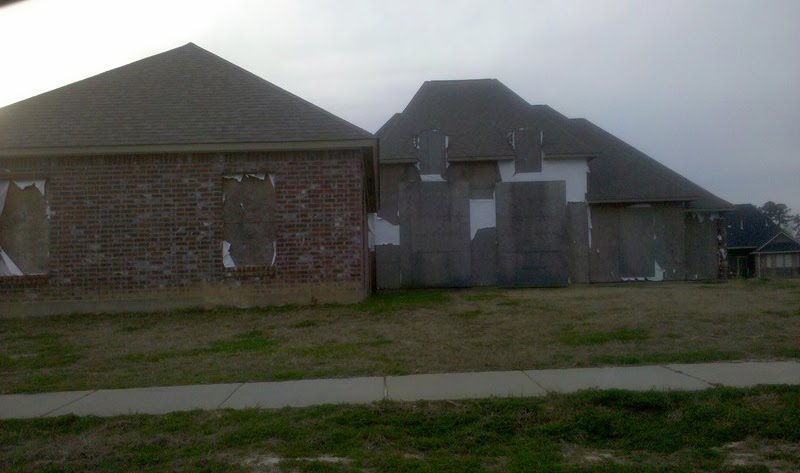 It’s a big house typical of upper-middle income suburbia, but it’s completely sheathed in plywood.  It looks awful.  And it’s in a good part of town in metro Baton Rouge.  Long an economic underperformer, the capital city of Louisiana enjoyed a boost in the past decade or so due to its strong petrochemical presence, coupled with consistently higher gas prices. The educated workforce attracted to state government jobs—often after graduating from down the street at Louisiana State University, the state’s largest academic institution—helped stimulate other major employers such as The Shaw Group Inc, one of the state’s few Fortune 500 firms. The spike in population from the Hurricane Katrina/New Orleans diaspora put a strain on infrastructure, but it also impelled employers to relocate, and many haven’t turned back. The city currently sits on many Top 20 lists for the strongest economies facing this horrendous recession, with an unemployment rate nearly 2.5% below the national average. Yet the Red Stick is still facing its own economic malaise.

Houses in the condition seen above (with plywood on all the doors and windows) may be pointillistic in Baton Rouge, rather than broadly red smears. Plywood isn’t ubiquitous like Detroit or Las Vegas, or perhaps parts of Charlotte. But the housing market here may be in as great of a cloud of uncertainty as its bigger, easier neighbor 70 miles to the southeast. New Orleans could still be reeling from a Hurricane Katrina recovery, but the homebuilding culture in Baton Rouge has not yet fully gauged how many of the new arrivals from 2005 are here to stay, or how many are only staying because the economic forecast is better in Louisiana’s capital than just about everywhere else. Take a closer look at that house below: 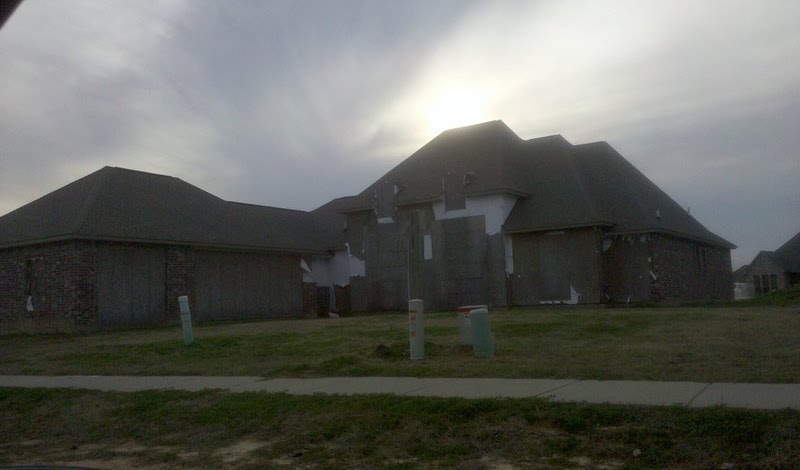 Without getting too distracted by the fantastic, completely unintentional sunburst in the background, several details on the house can help illuminate what went wrong, and when. Clearly the construction stalled, most likely due to a default on the mortgage, but you know it is a product of an acute economic crisis when the homebuyer reneges before a home is even complete, because it suggests that the buyer’s fortunes changed rapidly since the approval of the loan. But all of this didn’t happen recently. The color of the boarded-up windows is the dark gray of weathered plywood; most likely it would be a lighter, tawnier shade if the loan provider has sealed the home in the past year. The lack of a paved driveway is also striking. Usually the laying of concrete is one of the last steps, but the absence of a drive in a neighborhood where all other homes have them suggests that whatever entity currently owns the house has made no attempt to finish the job or even make this nearly complete shell seem even remotely inviting to a potential buyer. Plywood is about as uninviting as one can get.  Most likely it intends to deter thieves; the interior may still have some plumbing or wiring of considerable value. It may very well be that the lender itself is having problems, or decided that the market in this relatively economically healthy city is still too weak to justify adding the finishing touches to this home. And how does this ill-fated dwelling fit within its residential context? Here’s a home across the street: 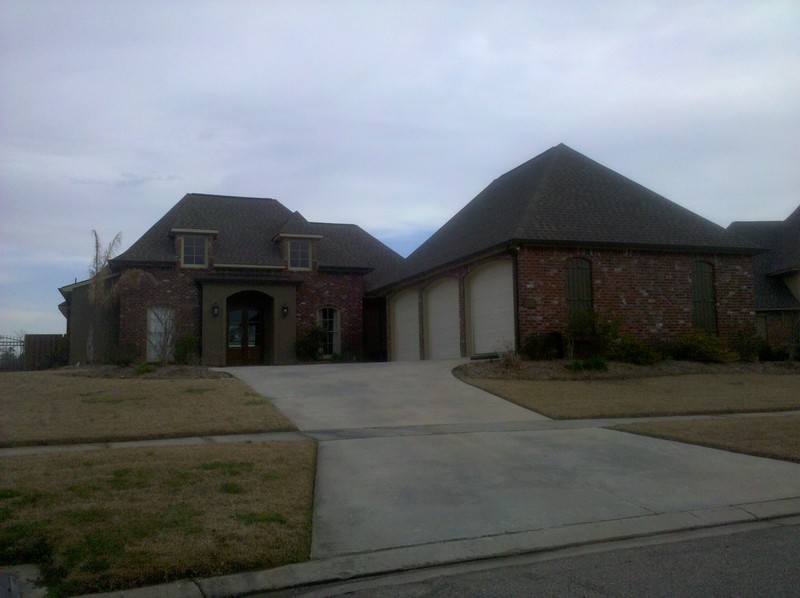 A bit too much garage for my taste, but without the plywood, the homes look fine.  This suburban subdivision is nearly complete, and the homes clearly target a middle or upper-middle income buyer. It sits in the far northeast corner of Baton Rouge Parish, outside the city limits in an area recently incorporated under the name of Central, with its own school district that rates far higher than the schools of Baton Rouge proper. By most metrics, this area should be booming, and this home should be an easy sell. All the more unfortunate that it sits in a bizarre state of inchoate decay, and clearly of no benefit to the neighbors’ property values. Will it ever find new life–peeling away the plywood and resuming construction? Each passing day, the home drifts farther away from the possibility of a resuscitation, since the requisite investment in returning it to livable status increases as it steadily deteriorates.  Plywood might keep marauders out, but the lack of climate control almost inevitably subjects the interior to Louisiana’s smothering humidity.  And mold.

This is not an inner-city ghetto, nor a faded inner-ring suburb. It’s not in the middle of nowhere, like the ghost subdivision I featured a few weeks ago. It’s in the heart of sprawling American exurbia, a part of the metro that should be thriving, in a neighborhood which people presumably have the wherewithal not to live above it. But perhaps they don’t; maybe even here they live above their means. This plywood eyesore demonstrates, more than anything, that it is still the consumer that drives development patterns. We castigate developers for cheap construction, but they would not attempt it if they could not find buyers. The vinyl villages of the late 1990s and 2000s may eventually stand as reminders of the area of ridiculously easy credit, where banks would blithely satisfy American’s relentless hunger for cheap but spacious housing. At this point, we hope we are out of the woods in terms of the worst of the foreclosure crisis, but the panoply of homes from a variety of sizes, typologies, and milieus demonstrates that the Americans who lived beyond their means did not fall into easily defined constituencies. Developers and policymakers are less proscriptive than they are reactive—the will of the consumer elicits a far greater impact on human settlement patterns. That collective aspiration short-circuited a few years ago and peppered our landscape with the detritus of failed domesticity. Developers are still frequently avaricious, but they make an easy scapegoat when they’re essentially participants on the same playing field as everyone else—and each one of us seeking a home is the real quarterback.

PrevREWIND: From Silos to Steeples, Painting the Town Green.
These lumps are always benign.Next

3 thoughts on “In an economic hell, a house is but a shell.”