Getting from A to B via Z(ig-zags).

Iâ€™m in the midst of a particularly intense period at work right now, and I have had literally no time to post. A computer slow-down at the moment is all thatâ€™s giving me a breather to squeeze a quick observation in. The second part of my dissection of the neighborhoods/subdivisions in Baton Rouge will have to wait until this crunch time endsâ€”hopefully within a few days.

In the meantime, I offer a reflection on a topic of considerable interest to meâ€”the engineering of spaces to accommodate the disabled. For the most part, the infrastructure that aids mobility for the vision-impaired or wheelchair-bound has blended in with the surroundings fairly effectively. Phone booths, rendered non-compliant with the 1990 Americans with Disabilities act, have become a rare sightâ€”all we generally encounter today are pay phones poised on metal poles. (And how much longer will we even see those?) In a matter of years, audible â€śchirpingâ€ť pedestrian crossing signals will be commonplace. Nearly all public restrooms serving a facility over a certain minimum size have at least one double-wide stall with support bars, to aid a person in a wheelchair. Most fire alarms in buildings feature flashing lights for those who cannot hear. And the novelty of wheelchair access ramps has worn down, so chances are we donâ€™t even notice them most of the time. 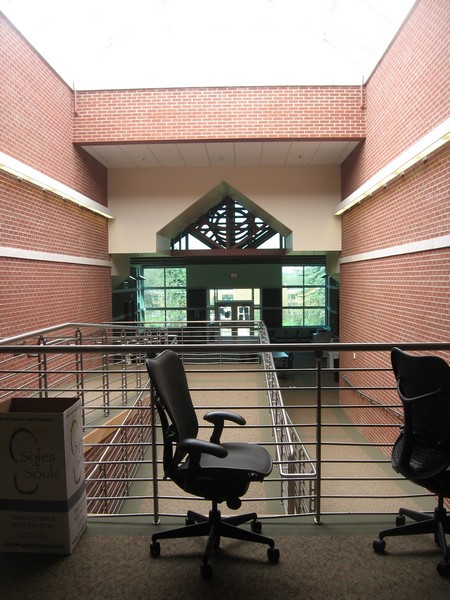 This small college in West Virginia features a central foyer in its principal lecture hall, and the seating for the two large lecture rooms on either side is just as heavily sloped. As anyone who has been to West Virginia knows, it is generally a state of great topographic varietyâ€”the most consistently rugged core of Appalachia. It is not uncommon for the north side entrance to a structure to be at an entirely different grade from the south side. The slope upon which this building stands is unsurprising; the prevalence of the wheelchair ramp is unsurpassed. Regardless of which side a person enters, it is the only thing that stands out. 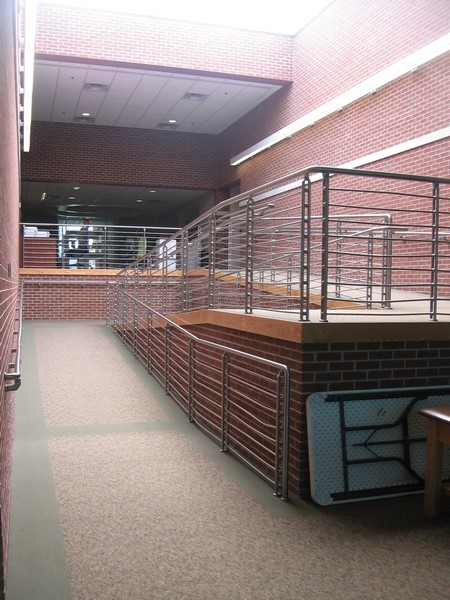 Though the appearance of the building does not suggest it to be particularly old, I would venture a bet that it still predates the Americans with Disabilities Actâ€”it is almost certainly a retrofit. I can think of no other reason why an architect would design a ramp (or why the Universityâ€™s facilities planners would approve of it) so that it becomes the only means of negotiating a grade change. Clearly the slope is severe enough that this was the only way of integrating a usable handicapped ramp into the relatively limited space that still falls under maximum incline standards, but it is visual obstruction as well as a physical one for the 99% of people who would be perfectly content with using stairs. They have to use the ramp as well.

The problem at this school represents a strange inverse of the predicament I blogged about a few weeks ago at the Memphis Airport, in which the absence of ramps along a concourse means that stairs are the principal option for managing a grade change. Wheelchairs can negotiate through a neighboring elevator, but what about an emergency evacuation when elevators may be down? Ramps provide the best option. Meanwhile, here in West Virginia, the absence of stairs at the buildings primary arterial could cause far more congestion for the majority of students, who would otherwise use stairs to evacuate.

These dilemmas demonstrate more vividly the challenges of accommodating extreme situations, for which external constraints are often formidable. Is it reasonable to plan for highly unlikely evacuation scenarios? Clearly the introduction many decades ago of fire codes and mandatory exit signage suggests that the public has continuously respected alterations in building construction that favor as close to a universalizing of safety as possible. But the continued introduction of new safety mechanisms also proves that universal designâ€”the closest means of articulating the goalâ€”is an incremental process, and it perpetually pursues the metric for perfection (i.e., universality) that will continue to dwell out of reach of engineers and designers as new demands for safety and accessibility pose increasingly diverse constraints. As cynical as this may sound, imperfection is a fact of life and will always stimulate human ingenuity to strive for improvement. The humble little building in the above photos is part of a medical school, and no sensible physician would ever claim to go into the profession with the goal of curing all disease. An irritant for one person may be the anodyne for another; solutions to the built environment are no different.

PrevThere goes the neighborhood, Part I: Separating the Typologies.
No surer sign of Texas envy.Next