Unfortunately job commitments continue to prevent me from devoting the time to assemble pictures and a credible analysis for the second half of my blog post on neighborhoods in Baton Rouge, but the end is in sight! In the meantime, I can at least briefly explore a topic which may already be widely known among the readers here, but it certainly seems to be common knowledge among the folks from the state who claim this as their own: 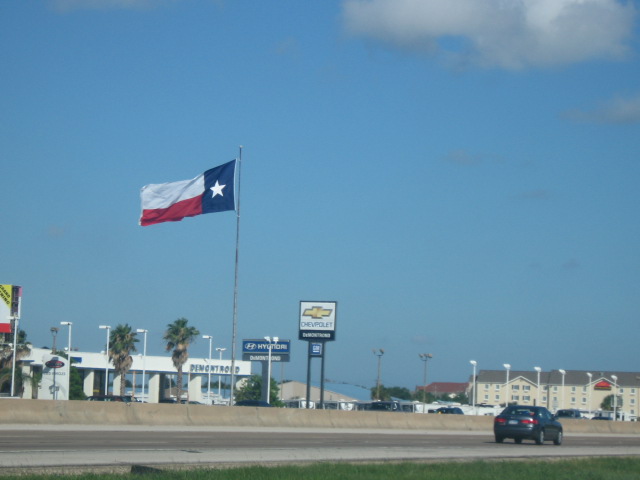 Yes, the Lone Star flag flies high in national prominence and proudly among Texans—no doubt they brandish it a bit more boldly than most states would; it is Texas, after all. But from almost any semiotic angle, it’s just a good flag. As I blogged about many months ago when looking at the Maryland flag (waved equally ostentatiously), the communicative properties of flags claims an area of study all its own, known as vexillology. And your average vexillologist would assert that the best flags possess some or all of the following features: simplicity of imagery; direct correlative meaning through colors and patterns; and a scarcity of text or direct illustrations. The Texas flag can claim all of these, and it has helped make the flag among the most memorable state flags in the nation.

But Texans have elevated theirs to an even higher status than most, if not all, other states. It is not uncommon for car dealerships to wave American flags, or even some other promotional flag. But where else besides Texas could one see a flag of this size? The one below (and in the first photo) sits along Interstate 45 at a car dealership slightly north of Galveston. 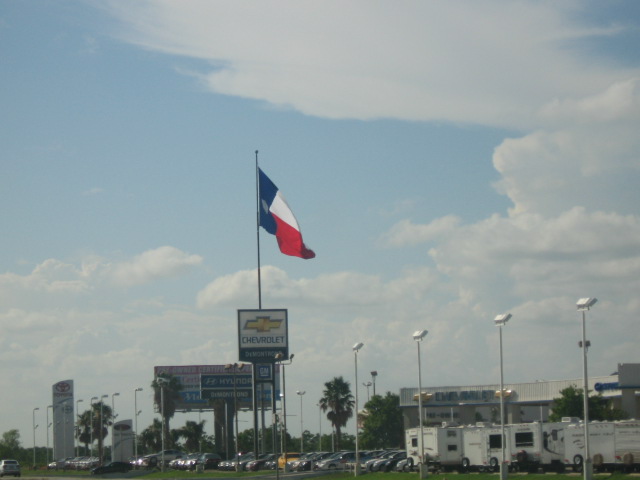 Equally striking is the absence of an American flag nearby on the dealership’s property. Such deference to a state—at the implied lack of recognition of the nation—would raise an eyebrow elsewhere in the country, but is a common sight in the Lone Star State. Equally routine is the flying of the flag on a separate pole as the US flag, but at the same height. 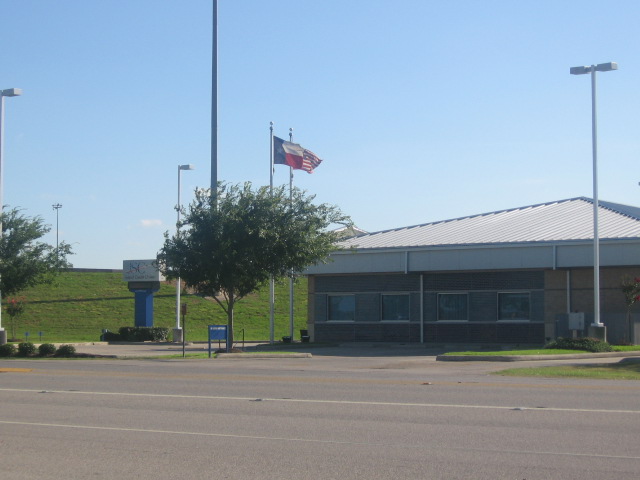 This image has fuelled the widespread myth that Texas, as a formerly independent nation, is the only one permitted by federal law to fly its flag at the same height as the US flag. Not true. While federal codes do prescribe standards for the handling and display of state flags, they do encourage a variety of approaches beyond conveying that the state flag is superior. Such a notion would also carry an undeniable whiff of favoritism out of Washington DC, and lawyers may argue that preferential treatment for a single state would implicitly violate the Equal Protection Clause.

So maybe it does come down to vexillology to explain the pre-eminence of the Texas flag. The symbols are bold, spartan, and clearly evocative of Texas’ history as a briefly independent nation. The fact remains that Texan pride is only a small component, and the ease for conveying the messages implied by the flag helps it transcend all the lousy state flags out there. New Yorkers, Floridians, and Californians also claim sizable populations but their respective flags are hardly as wedded to the state identity. Maybe if the Texas flag were as cluttered and unmemorable as that of New York, the state’s residents wouldn’t have it plastered across any feasible flat surface. But the fact remains that they do have this advantage (as do Maryland, and South Carolina, and New Mexico, and all the other places with unambiguously good flags) and when 25 million people can claim it as the banner for their state’s identity, it’s hard for people in the other 49 to overlook it.

PrevGetting from A to B via Z(ig-zags).
There goes the neighborhood, Part II: When a Name is More Powerful Than a Fence.Next