As the month’s end approaches, I’m due for another photo-centric blog post, and this time I have to reveal to my viewing community a particularly charming incarnation from the housing bust that shares an inextricable link to the economic downturn. Or perhaps not. This development, in Tangipahoa Parish, 60 miles to the northwest of New Orleans, seems to predate the collapse of Lehman Brothers, among other things: 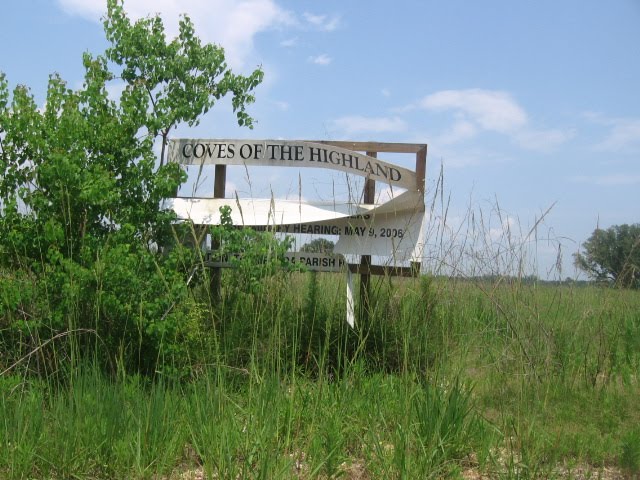 Much to my surprise, I was able to find out a bit about the proposed “Coves of the Highland” subdivision: it was part of a Community Development District under the same name, and the State Bond Commission approved $7.7 million to the District in the fall of 2006 for infrastructure and waterworks improvements, with the apparent goal of stimulating economic growth in an area moderately affected by Hurricane Katrina, through the creation of new construction jobs. In 2008, an audit of basic financial statements revealed no major reportable conditions, and the only issue of noncompliance was the District’s failure to adopt a budget on or before the first day of the fiscal year (January 1 of 2006, 2007, and 2008). And as of 2009, Coves of the Highland CDD is a plaintiff in a suit brought against the New Orleans law firm MgGlintchey Stafford, PLLC.

I’m hardly a good enough detective to connect the dots and figure out what happened with this limited information, but I have just enough sense to bring a camera with me everywhere I go, so I was able to document the progress—or lack thereof—of this large subdivision on a sparsely populated stretch of State Highway 445. 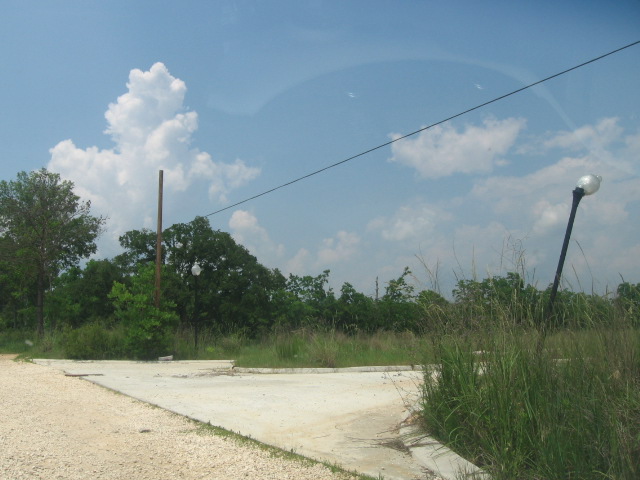 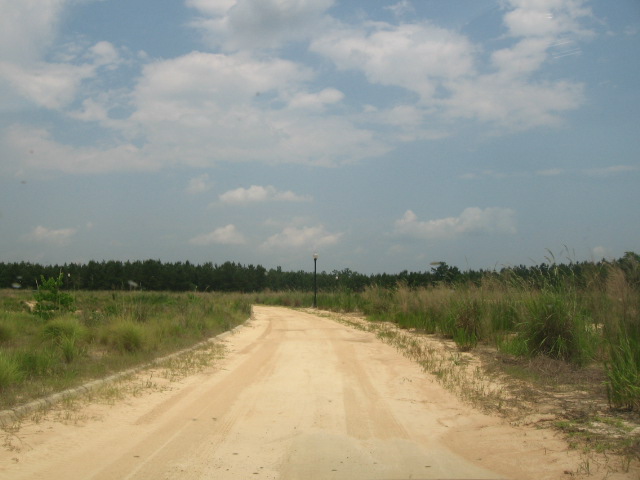 Judging from the wall of forest that surrounds site on three sides, the project involved the extensive clearance of trees. A subdivision with such sweeping tree removal most likely never targeted a high-end or luxury clientele; if it did, the developer may have opted for selective tree removal—most likely at a higher cost than widespread clearance—in order to retain a tree canopy, passing the price down to homebuyers in the form of costlier lots.

But this isn’t merely a cleared plot of land with groomed road beds. What is amazing about this development is how far along it advanced before it choked. 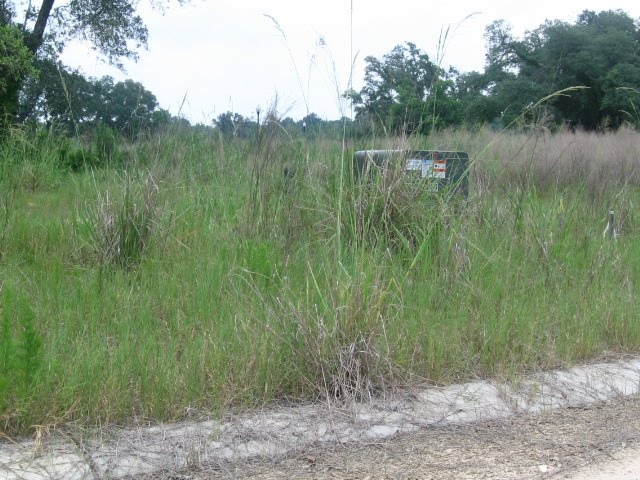 The streets have curbs, and the green box ensconced among the tall grass indicates the installation of buried power lines. 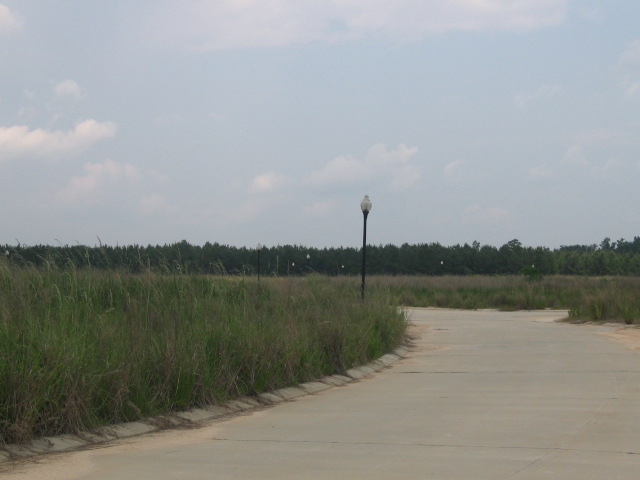 The developer also installed street lamps at regular intervals. In the background against the trees one can see little white flecks: more lamps. 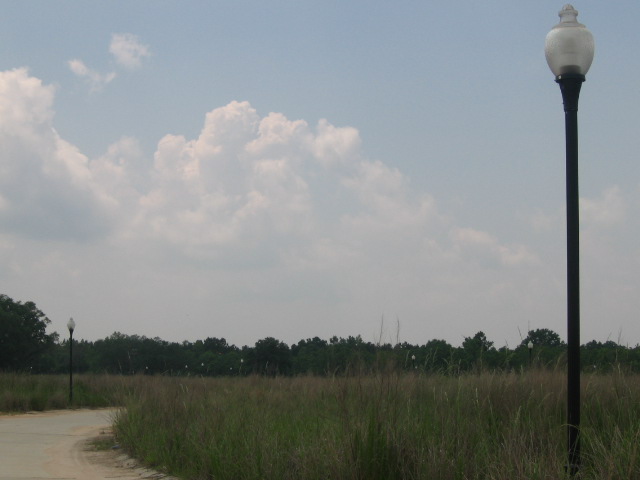 They’re everywhere—fully installed throughout the neighborhood. 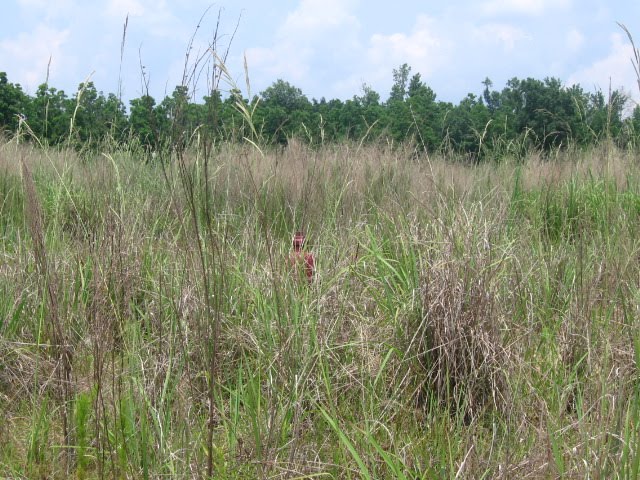 Scarcely visible in the center of the above photos is a trace of red—a hydrant. No doubt the developer installed water lines as well.

A development that is advanced enough to include curbs will inevitably also have storm sewers. 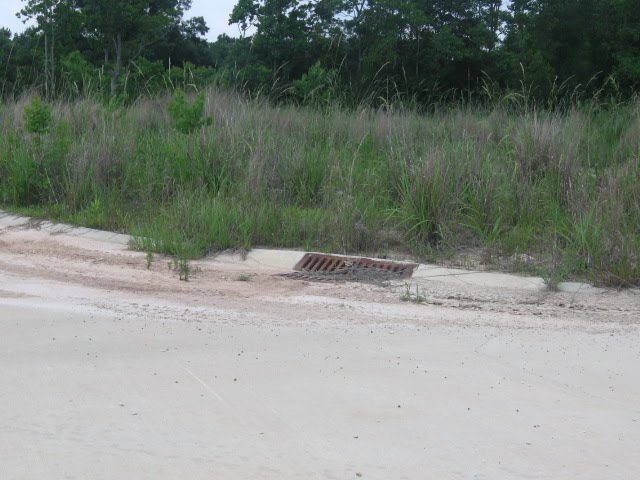 Near one of the entrances, the road diverges into what was probably intended to be a landscaped island on this triangular patch. 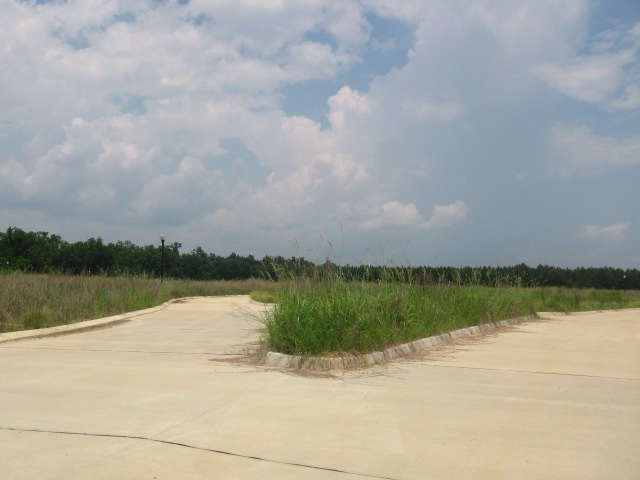 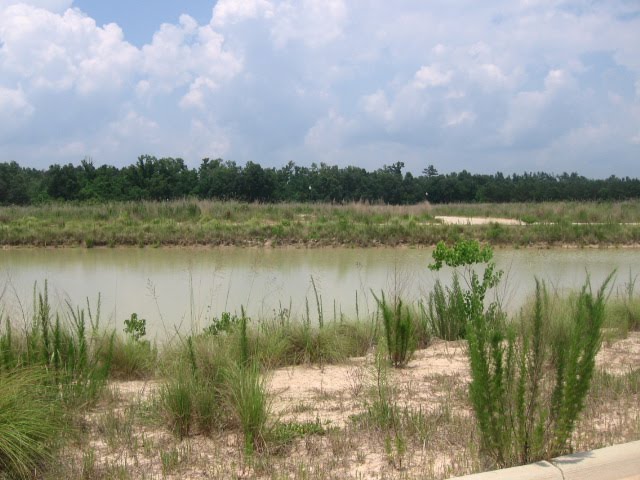 Perhaps the most interesting elements of these settlements-without-people are the traces of human presence, despite the absence of any real habitability to the development. Usually the human footprint comes in the form of illicit activity. Clearly the site has caught on as a dumping ground, though it is unclear how many parties are responsible for it. 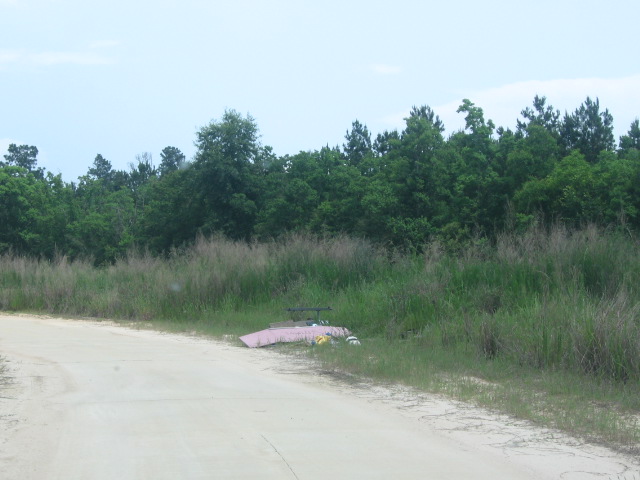 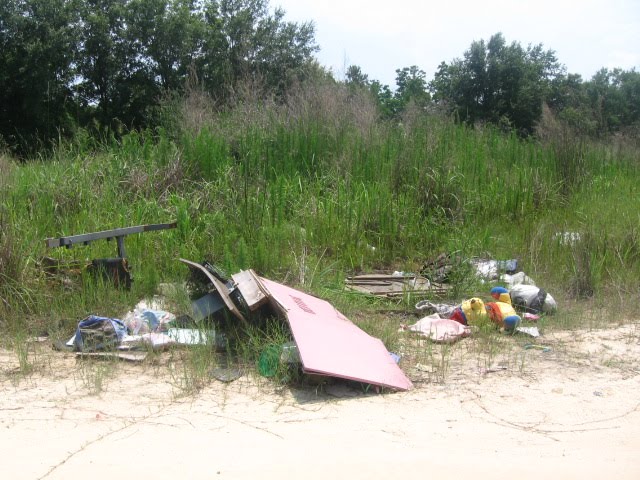 All it takes, though, is one pioneer—an individual bold enough to appropriate these privately owned lands by engaging in conduct that would range from undesirable to unthinkable on property that the same individual owns. Someone decided to use one of the dead-end streets at the back of this featured property to burn something down to ashes. 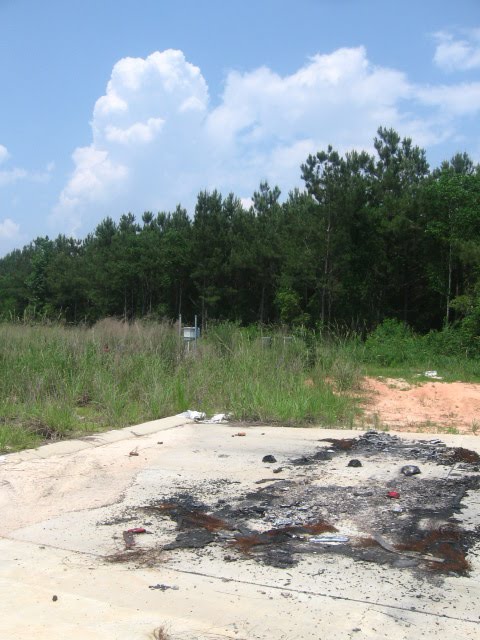 Correct me if I’m wrong, but is that a lift station in the background? 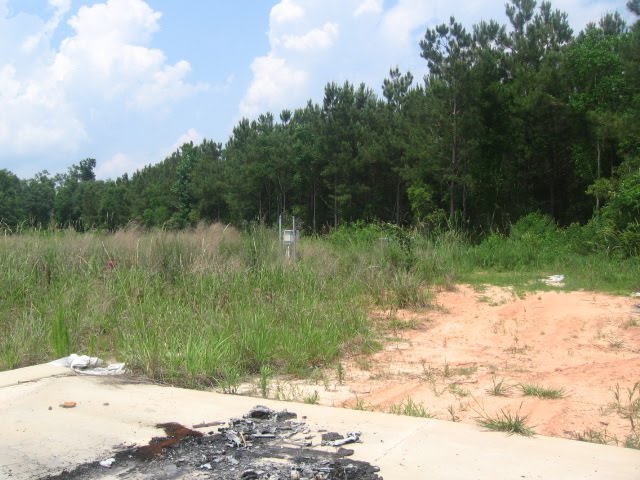 By now the Broken Windows Theory is generally broadly known: let an environment fall into neglect, and people will take advantage of the lack of maintenance by exacerbating the damage. Leave a home abandoned for too long and it will naturally age, but once someone breaks a single window and it stays unmaintained, the remainder will soon suffer the same fate. Essentially, passers-by can capitalize on the absence of any real stewardship. Our gut reaction is to associate the Broken Windows Theory with urban settings, such New York City’s precipitous drop in crime after Mayor Giuliani integrated it with his policing strategy by identifying and maintaining problem properties. 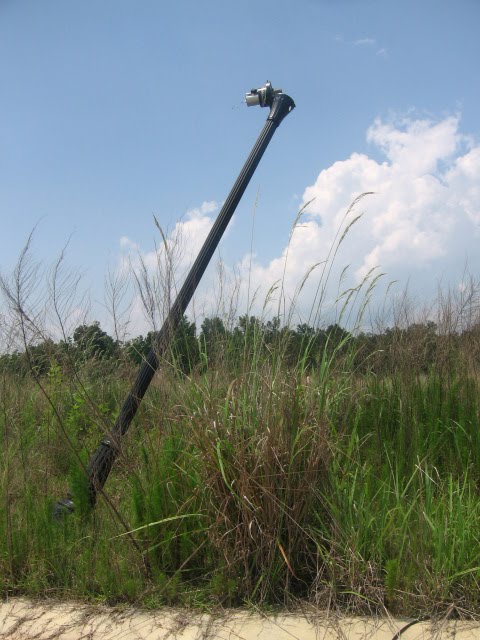 I suppose it’s possible that this light pole leans at an angle because of natural forces: subsidence perhaps, or a tornado, or most likely hurricane-force winds from Gustav (Katrina pre-dates the groundbreaking of this subdivision). But a car could just as easily have rammed into the base, and someone may have thrown rocks at the light at the top. The fact that the majority of lights in the subdivision are intact provides no extra clue of the identity of the damaging agent: a natural disaster could be just as fickle and selective as a human being. But all it took was that first individual to flag the property as abandoned, and the evidence of abandonment—and subsequent vandalism—is easy to identify.

Natural forces are the obvious instigator when the decay of synthetic materials and reclamation of flora occur simultaneously. Nothing reaffirms the abiotic nature of concrete like a flaw—a gap in the perviousness. 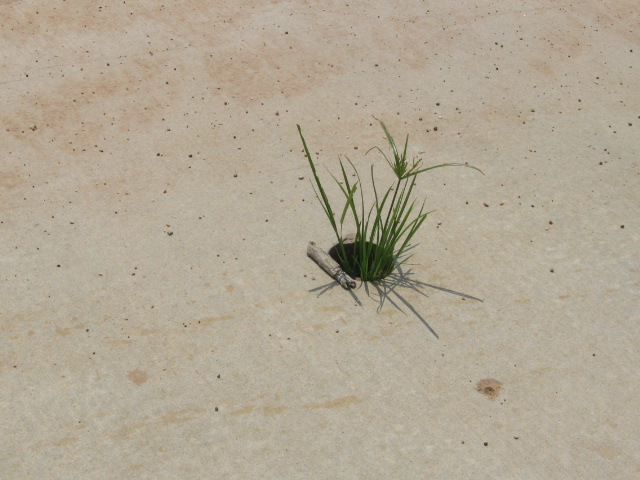 Presumably this patch of the road had just as plainly visible of a curb as the rest of it, but drifts of soil have overtaken it, sometimes thick enough to sustain plant life. 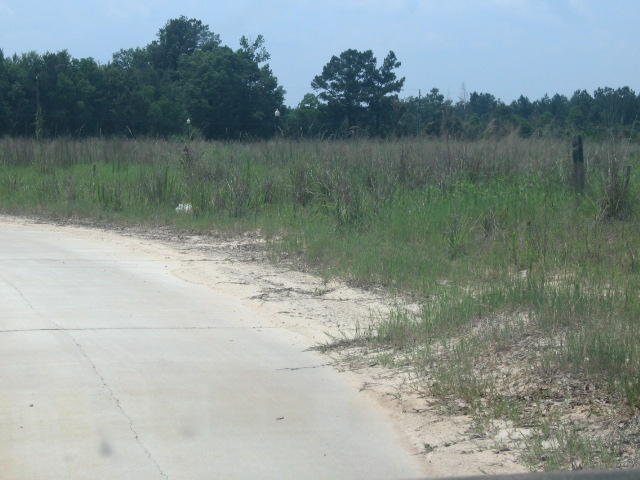 And I’m not sure what this was trying to be. 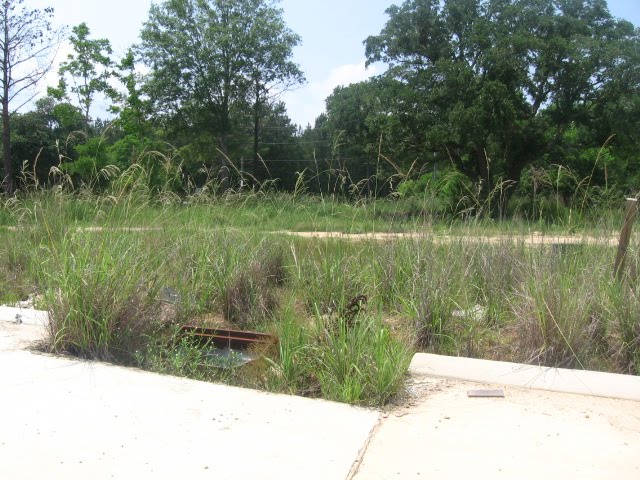 I’d guess it was most likely a storm sewer based on its position along the curb, but it seems to lack anything deep enough to be considered a conduit for the water.

So what caused The Coves of the Highland to tank? Its location offers a clue: 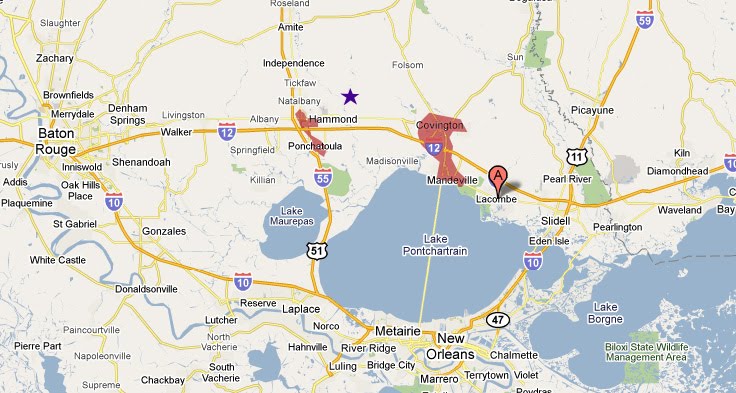 The purple star approximates the site. If that looks like the middle of nowhere, well, that’s a reasonable guess. But this is America; that has never stopped anyone. The fact remains that it falls in the radar of the outer-outer reaches of suburban New Orleans. Two other communities nearby are fairly developed and offer a significant number of services. I have traced the general urbanized area for these communities in red. The red region to the west, consisting of Hammond and the smaller town of Pontchatoula, conveniently sits at the juncture of Interstates 12 and 15. Hammond (pop. 17,000) is the county seat; it is also the home of Southeastern Louisiana University, a regional mall, and an enviably healthy downtown which has surpassed the mall in popularity in recent years. Ponchatoula (pop. 5,000) boasts an award-winning Main Street and is best known in the region for its annual Strawberry Festival. Hammond is considered the principal municipality of the Hammond Micropolitan Statistical Area, making it the economic center of Tangipahoa Parish, though I suspect commuting patterns will place the parish in the New Orleans Metropolitan Area by the 2010 Census. Meanwhile, the urbanized area to the east, consisting of Covington and Mandeville, are among the wealthiest municipalities in the state—indisputable bedroom communities of New Orleans for scores of commuters who take the great Causeway bridge across Lake Pontchartrain. Covington, the parish seat, also has a vibrant downtown expected of a premier suburb. The sleepier Mandeville, hugging the north shore of Lake Pontchartrain, has less of a distinct downtown but claimed a median family income of over $70,000 in 2000. The St. Tammany Parish school district consistently ranks among the top in the state.

Despite significant damage from Hurricane Katrina due to high winds (and storm surge in Mandeville), all four municipalities played pivotal roles in the Katrina diaspora. By many measurements, the catastrophic storm merely catalyzed an ongoing out-migration to these generally attractive communities. In fact, prior to the economic plunge of 2008, St. Tammany and Tangipahoa Parish had turned into a bit of a new Wild West for speculative middle and high-end developments. As commenters on this stalled St. Tammany development announcement have observed, the region is littered with subdivisions that failed to ignite.

The Coves of the Highland is hardly unique. But its location may prove a stumbling block to its eventual revival. It may be conveniently close to Covington and Hammond, but 10 to 15 miles to either town may not be near enough—and most of those other proposed subdivisions sit in a belt closer to Lake Pontchartrain, between Ponchatoula and Mandeville. The land value is higher in this belt, not only because of its proximity to the lake but also to New Orleans. I mentioned earlier that Coves of the Highland does not appear to be luxury—the cheaper real estate north of I-12 would certainly inhibit its chances of targeting a high-income crowd. And all of the evidence I introduced at the beginning of this blog post about it being part of Community Development District suggests that it received significant public subsidies.

Coves of the Highland will most likely find a developer to complete the process; Tangiaphoa Parish and the State Bond Commission have expended too much political capital through taxpayer-supported bonds to let the site languish forever. And someday, the continued development pressures will make it an optimal location. But it’s not there right now, and it wasn’t optimal before the housing bust. Forget what they say in Field of Dreams: they just don’t always come when you build it. Just ask the instigators of the New Homestead Act. Federal legislators are trying to impel people to move back to the rapidly depopulating Great Plains of central and western Nebraska, Kansas, and the Dakotas through all kinds of financial incentives. It wasn’t particularly successful the first time around, when the land was essentially given away—only about 40% earned their deeds from the federal government—so who’s to say it will work this time? And if it isn’t working just a few miles away from successful nascent bedroom communities of New Orleans (not to mention the equidistant Baton Rouge), when will Coves of the Highland succeed? The buyer will clearly have to implement significant repairs to the damaged infrastructure, but the same shared human values that make it a neglected dumping site now are sufficiently unpredictable to transform it in the future into a successful development, as well as a contributor to a practice at which Americans have long excelled: decentralizing.

PrevCivil unrest along the highway.
Not quite the corner store.Next