Approaching the end of the month, the blog is due for another photo-centered post, and this one is particularly telling because images are about all there is to offer. An Indianapolis revitalization initiative announced in 2007 had two primary goals: 1) intended to introduce streetscape improvements to the Martin Luther King Drive; 2) it proposed an extension of the Central Canal Towpath, carrying it southward from its current terminus near Riverside Park down to 16th Street. While it is possible that the sour economy stalled the plan, more likely than not it was just incubating, as leaders from the Martin Luther King Business Revitalization Association and the Department of Metropolitan Development finalized details to the design. At any rate, press coverage was scant, and even the Indianapolis Business Journal archived article only seems to survive through a reference by a suburban Indianapolis mayoral candidate’s webpage.

At any rate, the two-part proposal involved spending $3.8 million in proceeds from a TIF (Tax-Increment Financing) district that had been accruing funds since its establishment in 1997 by then-Mayor Bart Peterson. The structuring differed from the usual TIF district in that revenue accrued before the planning of any clear revitalization initiative—in most cases, the redevelopment or reinvestment transpires within the district before the revenue has been collected. At its most basic, the fundamental nature of a TIF is that the anticipated increase in revenue from improved property values and commerce helps to pay off the bonds issued for the initial development. But the project explored under this TIF district has clearly experienced delays since the initial announcement. At long last, city officials broke ground earlier this spring on the MLK improvements , covering about 10 blocks in one of the most densely populated portions of the corridor, running through the heart of the United Northwest Association’s neighborhood. The map below illustrates the series of plans proposed for the area: 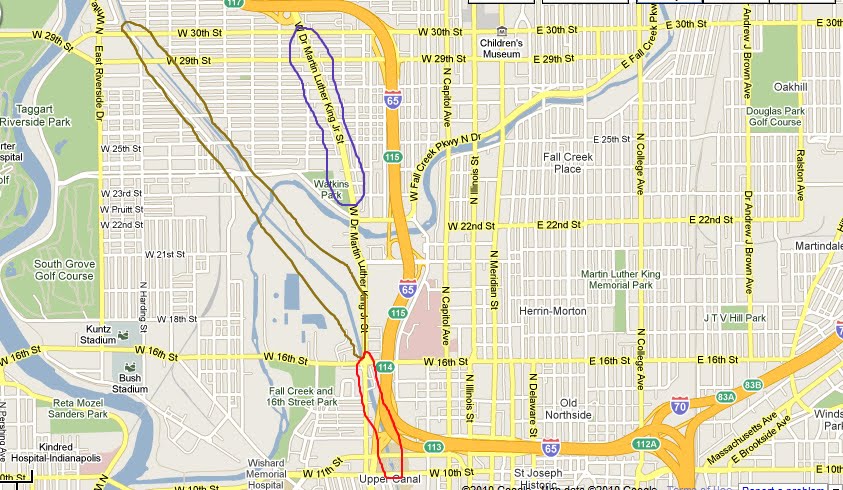 The area outlined in blue indicates the streetscape improvements for Martin Luther King Drive, currently underway. The area in green indicates the proposed extension of the Central Canal Towpath from its current terminus at 30th Street to its new location at 16th Street, for which little information regarding the proposed extension seems to be available. My focus, however, with this photo montage is on neither of the aforementioned proposals. Rather, I wanted to explore the unresolved lacuna that will remain, even after the Canal Towpath benefits from an extension southward from 30th to 16th. That is, I hoped to explore the no-man’s land between 16th street and the current terminus of the Indianapolis Canal Walk, at 11th Street. I’ve featured several blog posts in the past on the Canal Walk, for which I am not entirely complimentary, but I generally can at least appreciate that the 11th Street terminus at the recently restored Buggs Temple (to the center-right in the below photo) offers some decent vistas and a handsome waterfront hardscape. 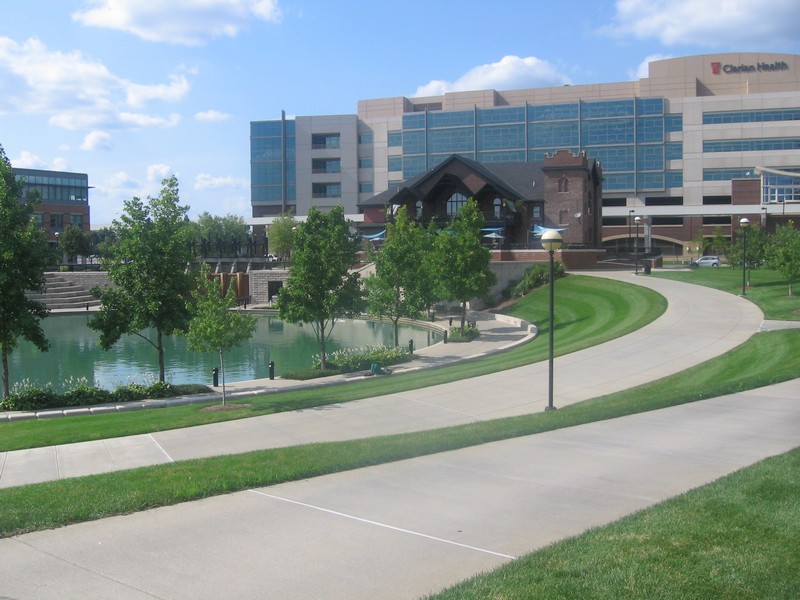 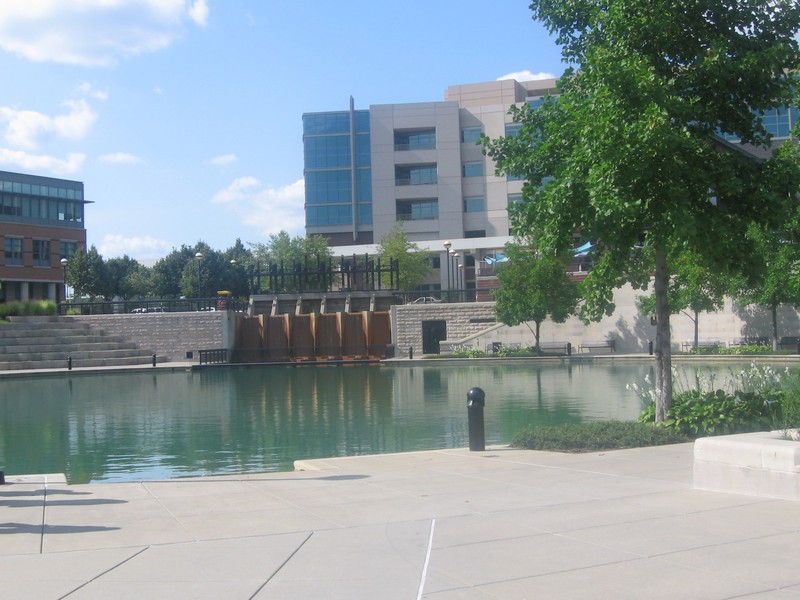 But a satellite view of that same area circled in red shows the immense challenges facing any attempt to revitalize or beautify the stretch of the Canal from between 11th and 16th Streets. 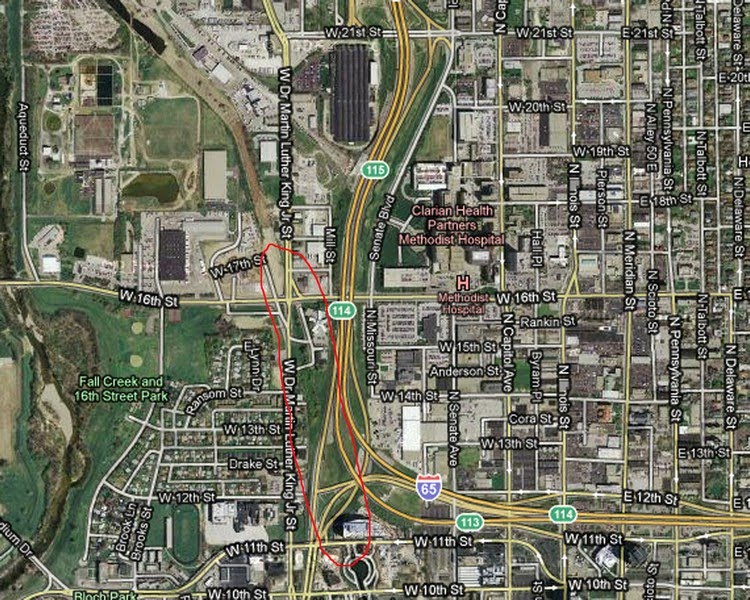 In short, the Canal isn’t there. It has been undergrounded to make way for the spaghetti junction of exit ramps at the point where Interstate 65 curves from an east-west trajectory to resume its typical north-south path. My goal with the photos below is to show the northernmost end of the Canal Walk, at the 11th Street locks, pressing northward to reveal the urban environment which has supplanted much of this segment of the Canal. Let’s start at the locks, which at this point are more of a decorative feature signaling the end of the Canal Walk than an actual instrument for regulating water levels. 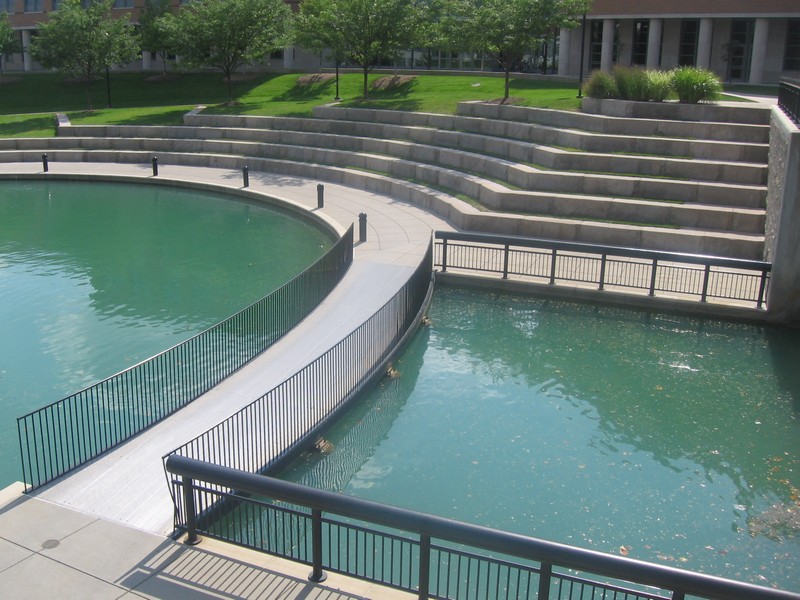 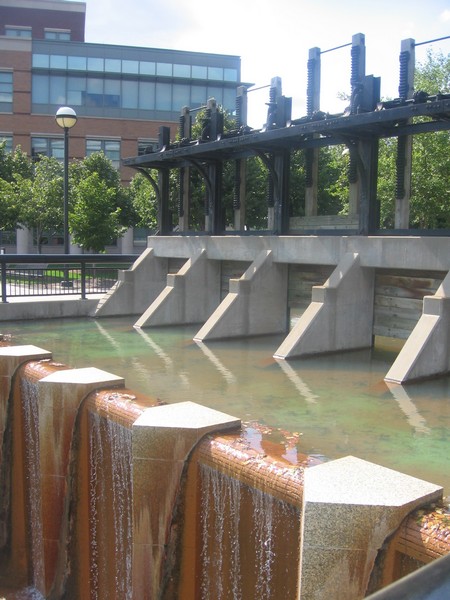 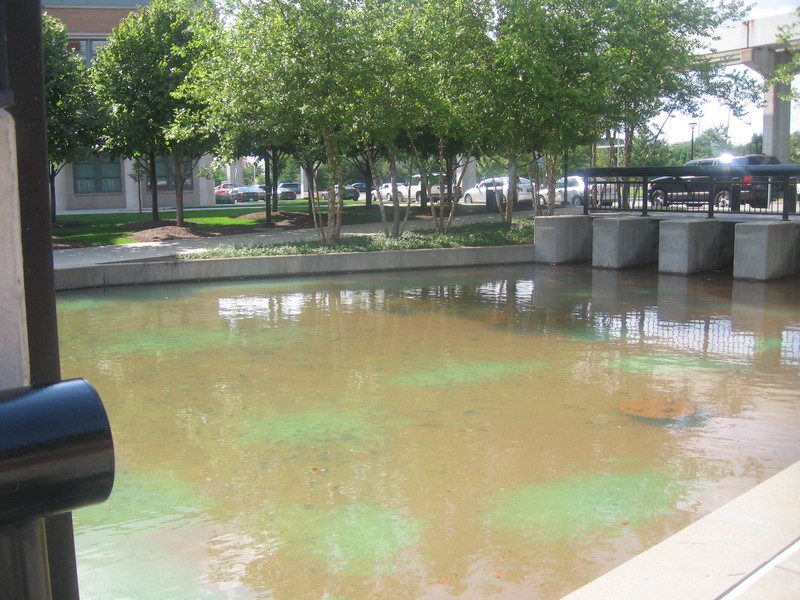 Crossing 11th Street to stand underneath the Clarian People Mover, the gates to the locks are visible in the background. 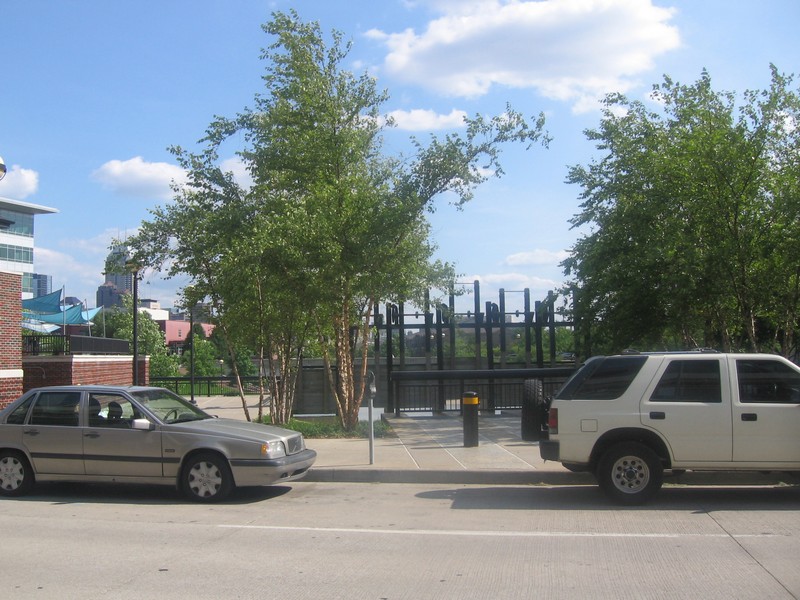 Pivoting from this position, I have tried to scan with the camera the path that the Central Canal should take as it negotiates 11th Street. 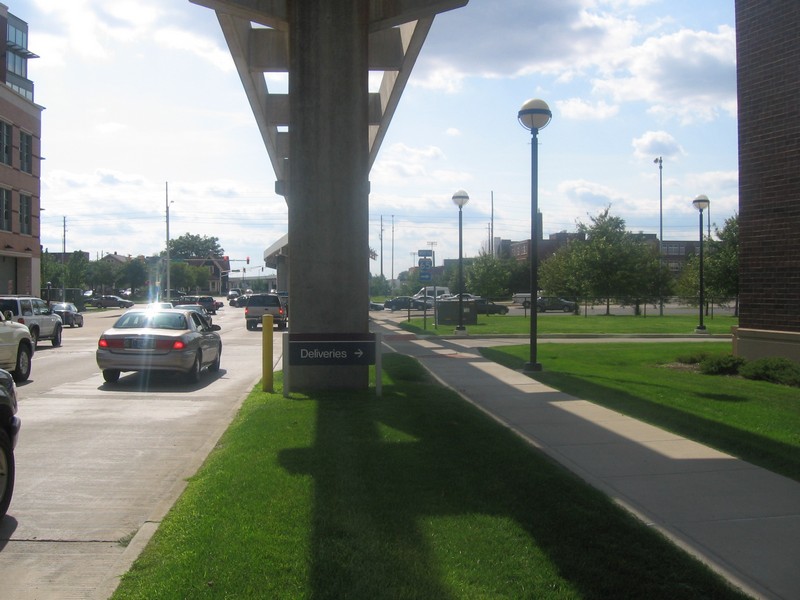 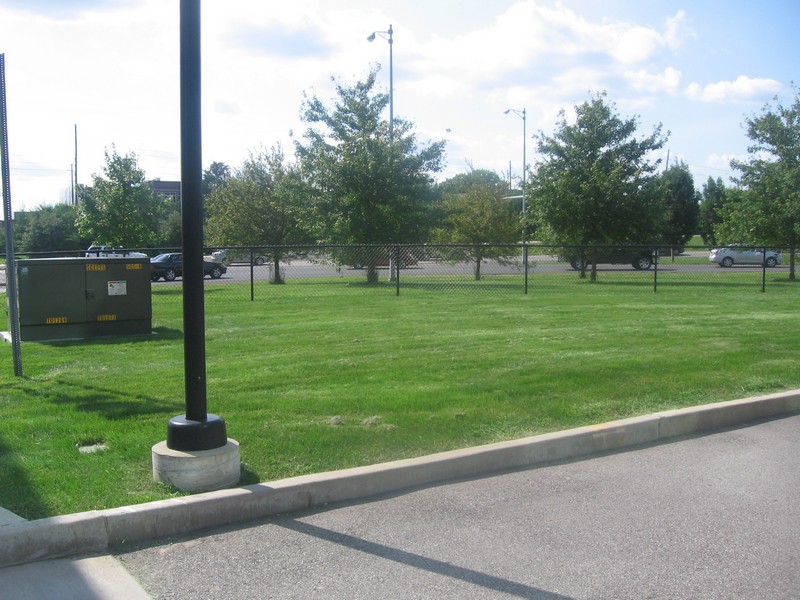 Then it would continue alongside the interstate ramp, in the grassy area with trees in the photo below. 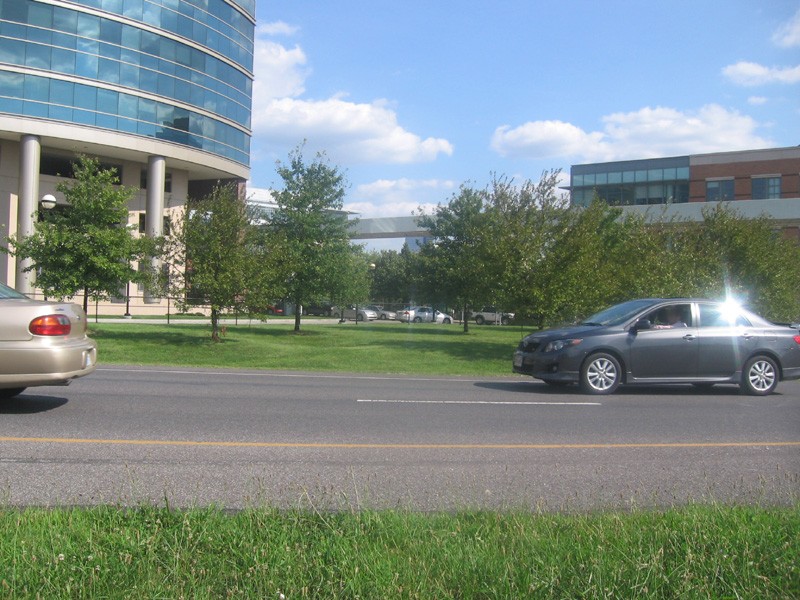 The gentle swale here most likely captures the former path of the canal, though it is impossible for me to tell exactly where it crosses the high-speed entrance ramp onto Interstate 65, but the third photo below captures the approximate location. 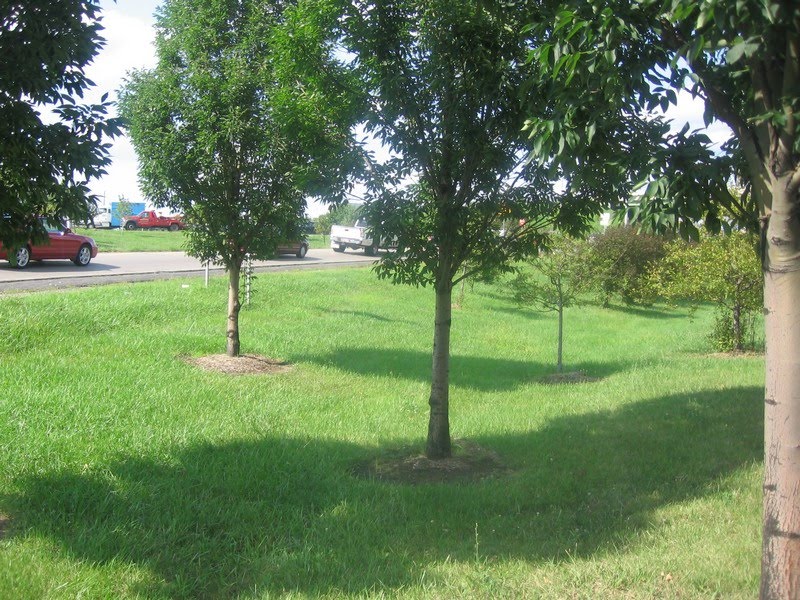 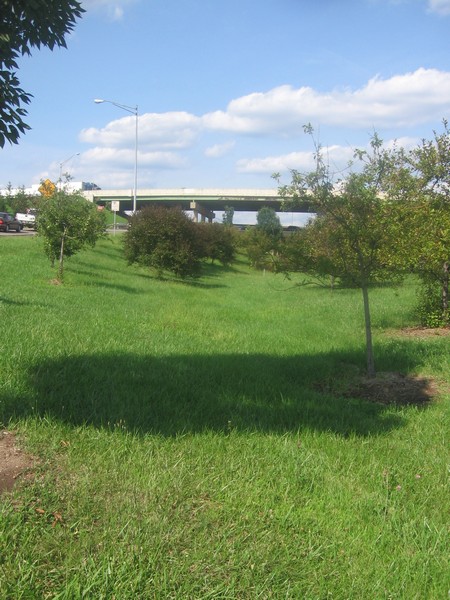 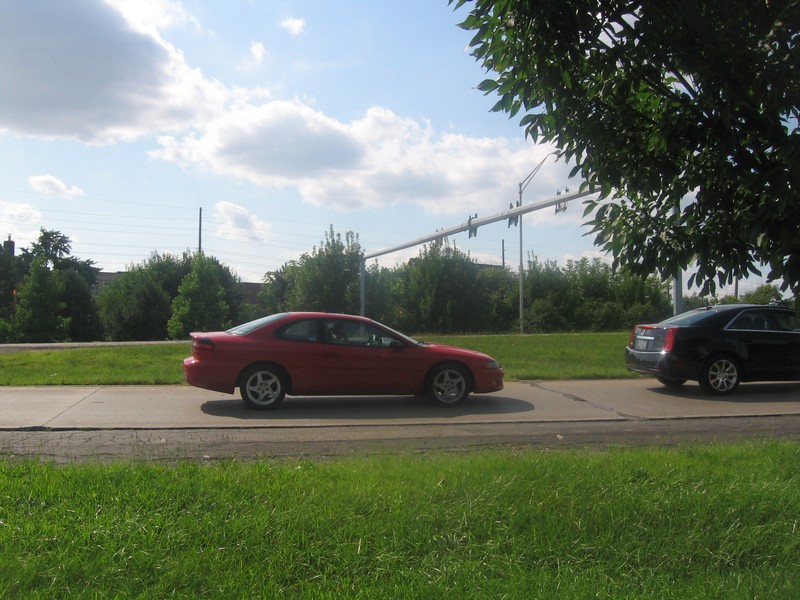 At some point, the culvertized, underground canal crosses under those ramps, buried beneath a series of high-speed lanes that look like this: 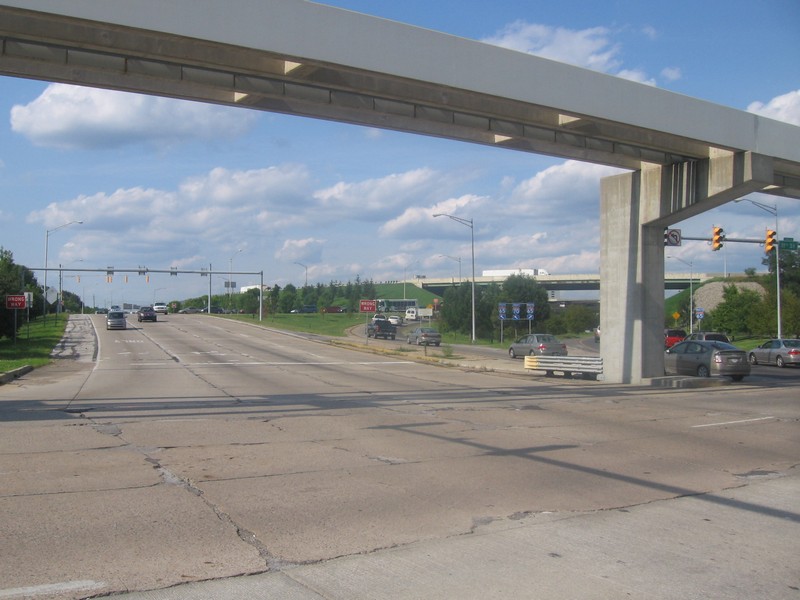 And the grassy swale continues on the other side behind a chain link fence. 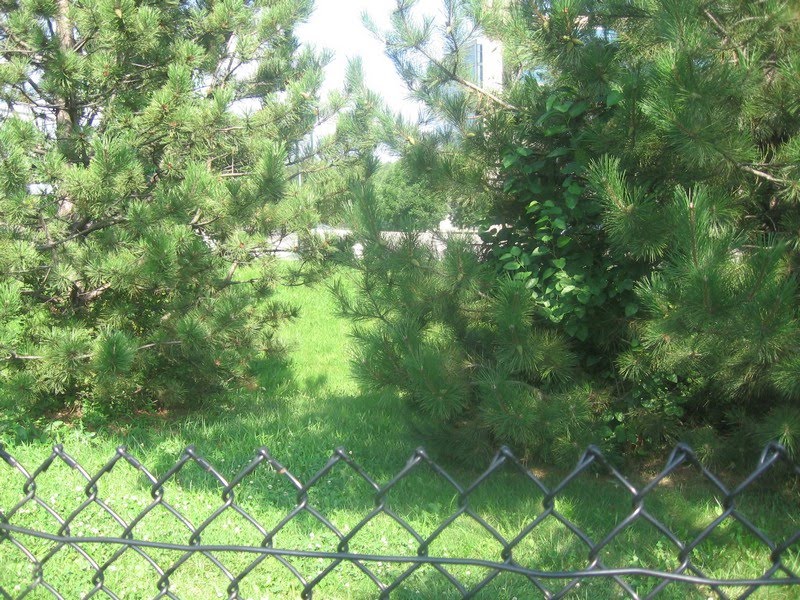 The following photos are visible while traveling along Martin Luther King Drive, and they form the back yard to some puzzling condos that I blogged about last year. 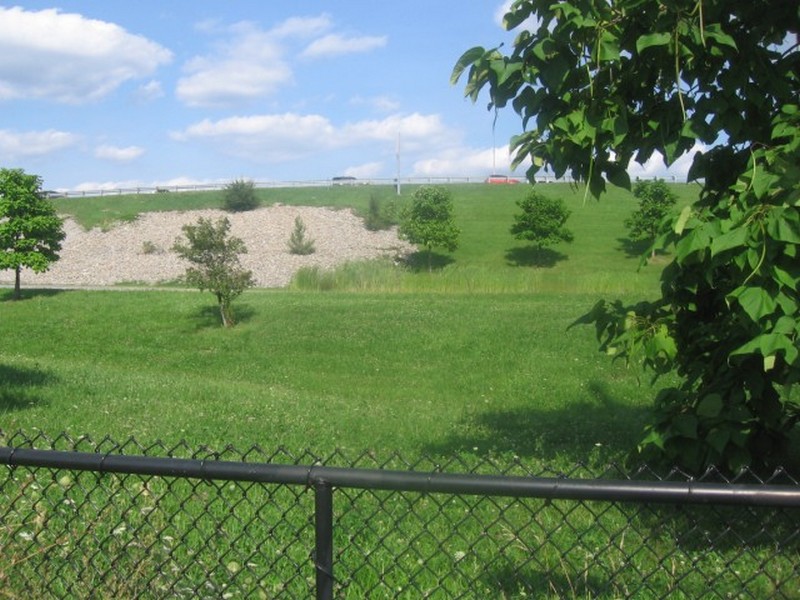 At this point, the swale—the only remnant of the Canal—is plainly visible. 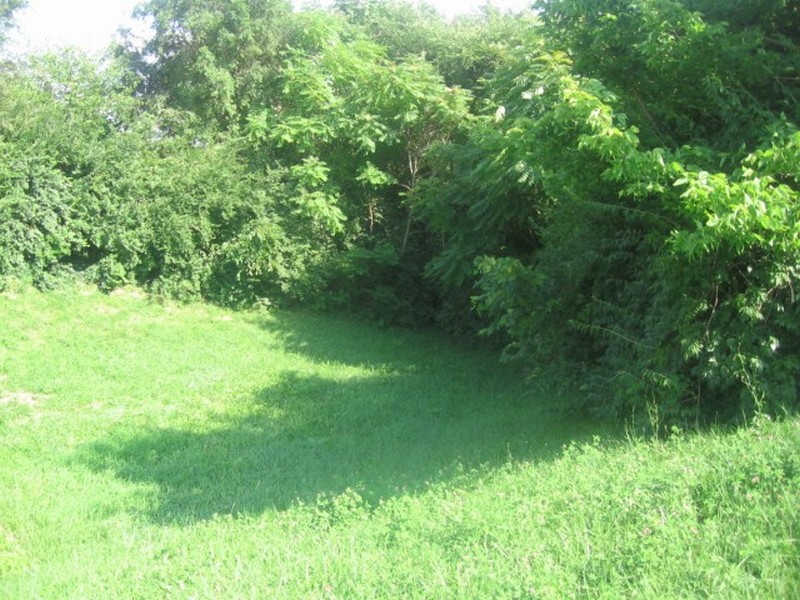 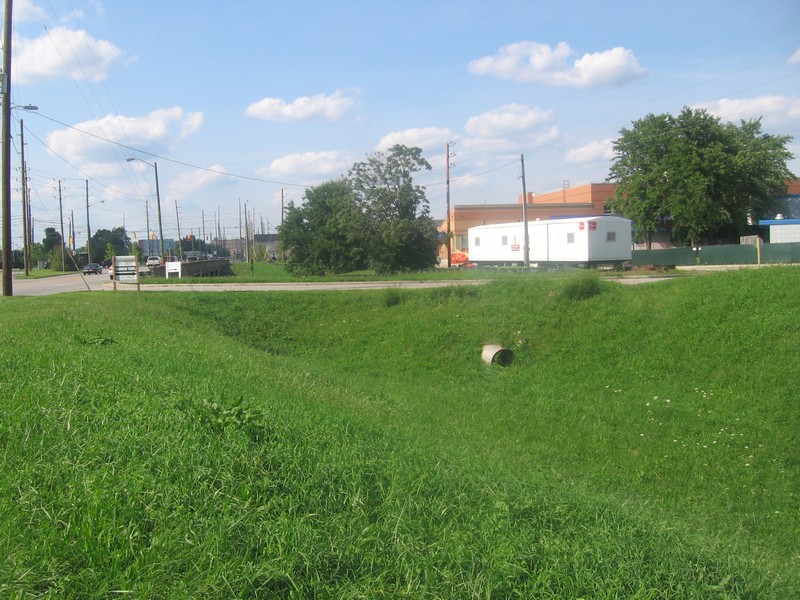 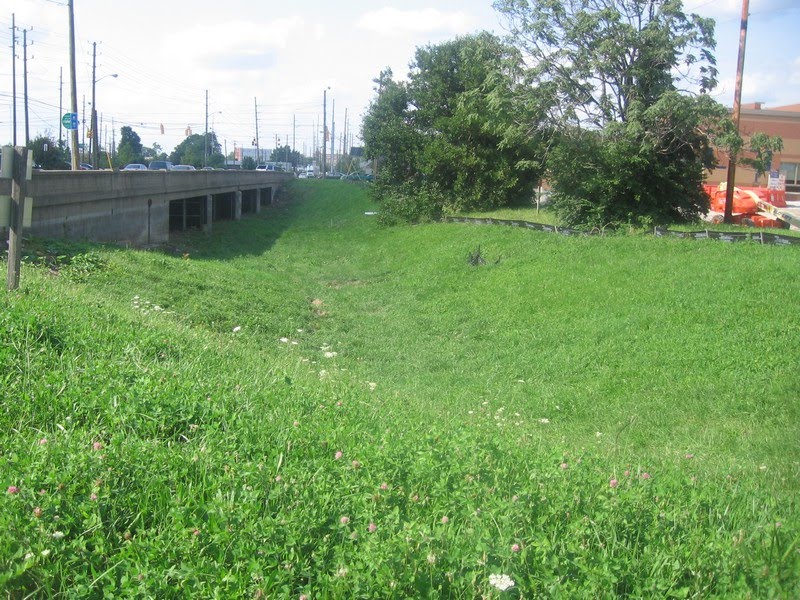 The bridge that is visible in the final of the three above photos leads directly to the intersection of 16th Street and Martin Luther King Drive, which at this point will comprise the southern terminus of the Canal Towpath extension, whenever it is completed. Judging from the photos below, the intersection only stands to benefit from the introduction of new pedestrian amenities. 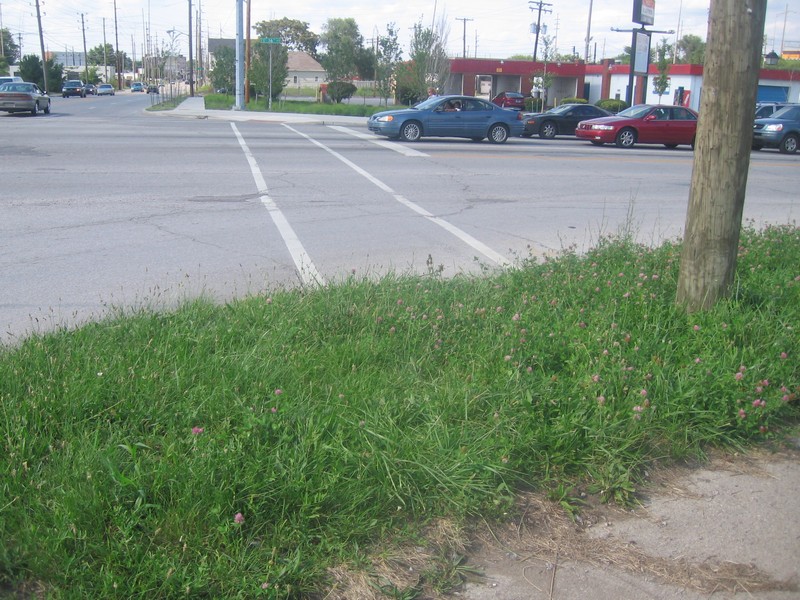 Looking northward of the 16th Street/MLK intersection, one can see more of the grassy swale which, in this instance, will ideally be reverted to a canal with the towpath at some point. Clearly $3.8 million in TIF money would hardly cover the cost to unearth the canal and add a parallel trail, but at least the contours of the land already hint at an eventual vision of an uninterrupted canal. Here’s the view: 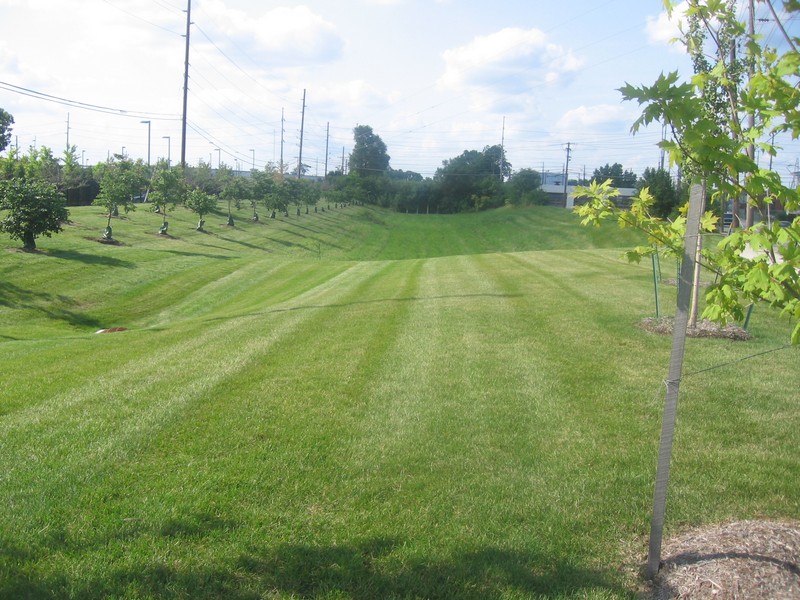 And just beyond the barrier seen in the distance here is the canal—a portion that remains exposed to the sun and generally ignored by the public. 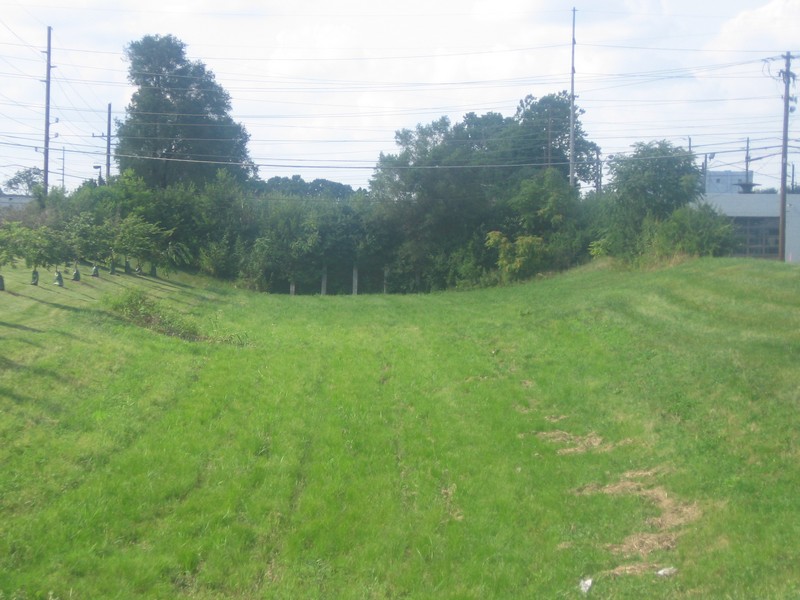 (Note: The above photo series was taken in the late summer of 2009. Since that point, the Glick Eye Institute has experienced considerable construction progress at 16th and Martin Luther King, and will most likely engender some modest pedestrian improvements at the intersection.)

This crude sampling of urban archaeology effectively demonstrates the enormous investment that a City such as Indianapolis was willing to incur decades ago, when it decided that one mode of transportation (car/road) had unambiguously fostered the obsolescence of another (boat/canal). The Indianapolis Central Canal was never a success, and it nearly bankrupted the state when it was first implemented 150 years ago. But its curiosity lingers—so much that artists’ renderings have devised fanciful proposals that actually envision a daylighted canal and towpath, extending underneath the interstate to link 16th street with 11th. For example, the shelved “Circle Truss” proposal from a few years back clearly envisioned an uninterrupted Canal Walk passing under the interstate, manifested in the renderings here, from the Urbanophile’s web link.

Whether the public would ever support the phenomenal expense for this final leg—circles circled in red in my above maps—is anyone’s guess, but the fact that visions exist for such a plan shows the enduring power of introducing water to urban revitalization proposals. My own opinion is that the extension of a path along the canal easement to link 16th and 11th streets would be costly but feasible, and would elicit a high return on investment by creating an uninterrupted greenway that significantly enhances the pedestrian network for the city’s near north side. However, unearthing the buried canal in this stretch may prove far too challenging and troublesome to justify the enormous cost for a real extension of park/pedestrian infrastructure. But big-city redevelopment initiatives over the past thirty years prove that we venerate water much more than we did in the mid 19th Century—the era of urban interstates—so I would hardly rule anything out. Like the Canal Walk itself, improvements should be incremental and perpetual, avoiding any collective complacency that normally accompanies the sensation of having reached a long-awaited goal. Regardless of the outcome of the TIF initiatives on Indianapolis’ near northwest side, the investments will most likely prove but a small component of an unceasing work in progress.

PrevScrubbing.
There goes the neighborhood, Part I: Separating the Typologies.Next