Even the cows can be crooked.

Across most cultures, the animals that comprise what we would call “livestock” remain remarkably similar. Chickens, turkeys, goats, pigs, sheep, cattle, and horses are reliably visible in countries with widely variable climates and levels of industrialization. Some of this may be due to a commonly cultivated taste for the meat, milk, and eggs of these creatures, but I suspect this is a minor contributing factor. The truth is, humans domesticated the aforementioned ruminants and fowl because they proved extremely adaptable—not only to a variety of climates but to varying degrees of co-existence with humans. Centuries of livestock farming have proven that horses and pigs respond comfortably to an environment with a heavy human handprint; deer and moose and wolves do not.

So it shouldn’t have surprised me as much as it did to see a small herd of  in the setting captured in the photograph below, taken across the Mississippi River and downstream from Baton Rouge: 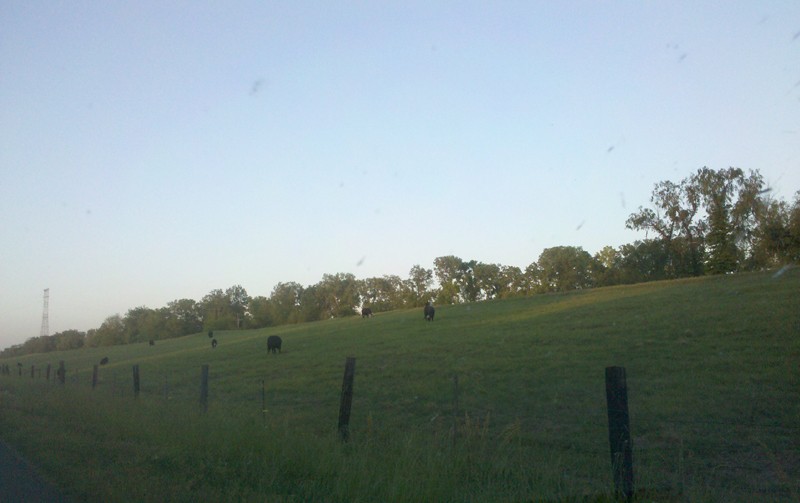 For those who live in states less dependent than Louisiana on a vast network of flood protection systems, the levee is essentially a magnified earthen berm that protects surrounding lands from a crest in the river. With the exception of bridges, views of the Mississippi in Louisiana are therefore relatively scarce. The quintessential River Roads that parallel the river’s trajectory in Louisiana generally offer this vista: 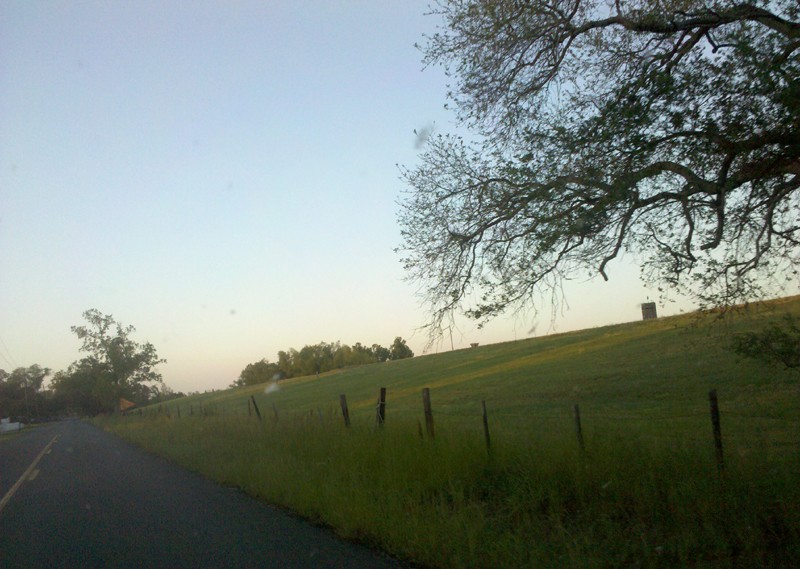 But cows on the levee? It provides a droll sight the first time around, and raises interesting questions regarding the ownership of these vast structures. Historically the Mississippi River was the lifeblood of agrarian commerce for the interior of the nation, with New Orleans serving as the urban gateway. The first wealthy landowners in southern Louisiana settled along the Mississippi, forming a concatenation of plantation properties with elevated homes that often fronted this mighty current, which of course was unprotected by levees at the time. Roads at this point were crude and inconsistent; the river provided the primary access to larger settlements such as New Orleans, Baton Rouge, and Natchez. Despite the flood risk, settling by the river made sense because of its transportation role. The riverbanks also offered the only arable land for these Creole settlers; anything more than a few miles from the river often dipped below sea level into unusable swamps. The Mississippi River does not form a valley in south Louisiana—it’s the exact opposite. Essentially, the depositing of silt from the Mississippi has created a natural levee system that made settlements such as New Orleans feasible, since the riparian lands upon which the French Quarter and other neighborhoods rest are the highest points in the region. The Mississippi River is a peak, and everything else around it is low.

Now we have superimposed a manmade levee system on top of the one that Mother Nature provided; the most expensive and sophisticated of these come courtesy of the Army Corps of Engineers, while FEMA provides the standards that allow a classification of floodplain status used for the National Flood Insurance Program (NFIP). These elaborate protective barriers have amplified the complexity of levee property ownership, as the world became aware during the exhausting controversy of breached levees flooded New Orleans after Hurricane Katrina. Who owns these steeply sloped strips of land between the River Road and the river itself? It can be a federal agency, but it could also be a State-initiated water management district, a municipality, a district exclusively in charge of levees, or, as is often the case, a private landowner. Maintenance of the levees is always a public responsibility, and in the case of Louisiana the task typically belongs to one of the many levee districts run by each of the parishes (Louisiana’s equivalent of counties) that claims part of the river’s banks. Even if the land is privately owned, the stewards of the levee earned the right of access to the levee top through an easement—various segments of the levee have obliquely angled gravel roads to allow safe vehicular access in a fashion that will not damage the soil or weaken the berm. Some parts of the levee have dirt roads on top. Much of the levee tops in New Orleans and Baton Rouge have pedestrian and bike trails. In recent years, an organization has even sponsored an exhaustive Rouge-Orleans race that stretches the full 124-mile length of the river’s course between the state’s largest metro and its capital. 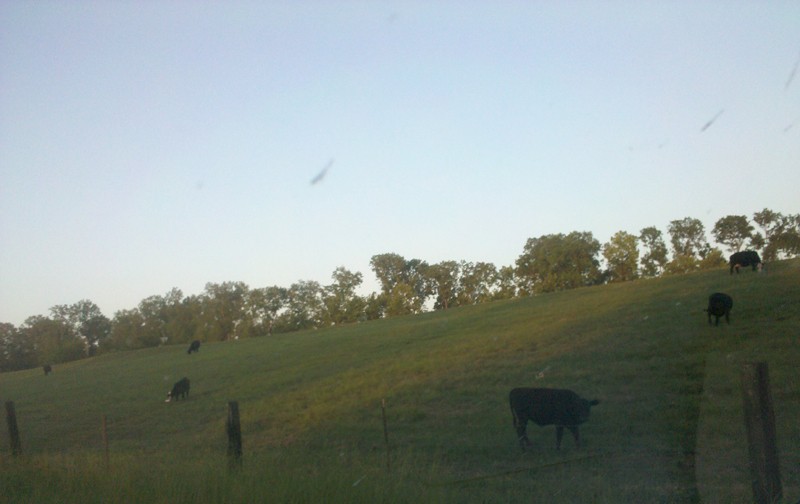 It’s amazing, considering all these interventions, that private landowners have still found a way to stake their claim on the lands. Clearly this specific one chose to use it as pasture land. Is it healthy for the cattle to graze on such a heavy slope? Surely the dairy farms of Wisconsin and California aren’t perfectly flat, so that should not prove a major impediment. And it could very well imply a sort of mutual benefit agreement between the landowner and the levee district: while the district ideally maintains these structures that protect all the abutting lands from floods, the owner of these cattle has saved the district the trouble of using potentially destructive tractors to mow the levees. Why is it necessary to keep the levees mowed? An excellent question, to which I’m not certain I have an answer, though I suspect that a completely unkempt levee may impede access for vehicles that inspect the structure, and it may attract undesirable wildlife: muskrats and nutria are known to pull grasses by the roots that help stabilize the soil of Louisiana’s levees and wetlands. At any rate, whether a landowner, State agency, or levee district is doing the maintenance, a carefully manicured levee lawn remains the norm and not the exception. The landowner in this case seems to have a permanent operation with cattle on the levee, as proven by the legitimate fencing and gates. 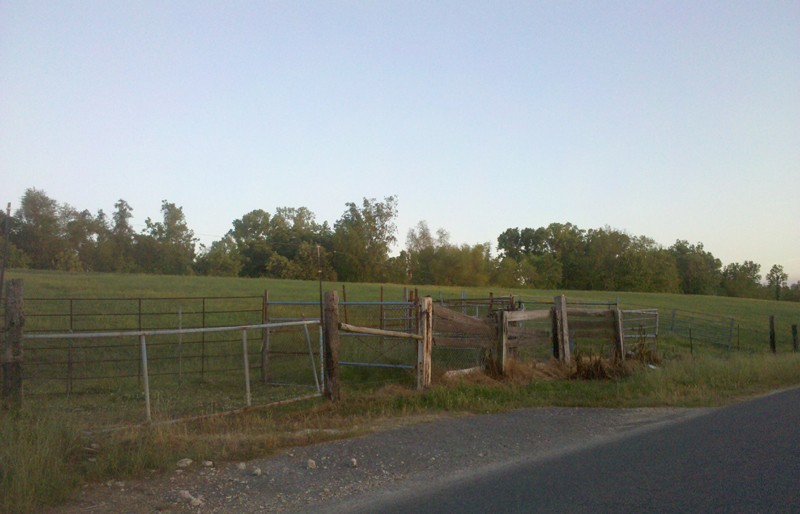 Perhaps this sight isn’t as rare as I am inclined to believe. A Flickr photo of a much more crowded levee/pasture provides some dialogue that suggests this is a common occurrence. A state institution such as the Hunt Correctional Institute (the women’s prison) may actually employ the cows principally as grazers for maintaining the portion of its property that fronts the river. At any rate, the cattle of sweaty south Louisiana seem as placidly adaptive to this unconventional milieu as they have to whatever climate, topography, or confinement method humans have subjected them. Levees may or may not be difficult on the ankle tendons of livestock, but considering the conditions of the modern industrial cattle farm, the steeply sloped banks of the Mississippi are a bucolic paradise.

PrevMaking it hot to be wired, Part III: When the cachet of cables is as lofty as their height above ground.
For economic development, is design the tail that wags the dog?Next

6 thoughts on “Even the cows can be crooked.”