It’s not just the domain of rambling old men in seersuckers on front porches. Everyone knows that New Orleans is sinking. The Tragically Hip even wrote a song about it. The idea of a post-apocalyptic New Orleans submerged in the Gulf of Mexico entered folk parlance long before Hurricane Katrina. But is it really doomed to settle so far below sea level that the “bowl” in which it rests becomes visible to the naked eye? Or do we simply equate the process of subsidence (a legitimate concern recognized throughout the country in Hazard Mitigation Planning) with widespread land loss? The discovery that Louisiana was shrinking reached the discussion table long after the discovery that it was sinking. But the forces acting upon these two geologic processes are, for the most part, quite different.

Land loss in Louisiana, though recognized among scientists for half a century, did not achieve much awareness outside of the region until Hurricane Katrina revealed New Orleans’ increasing vulnerability to storms. Coastal erosion, largely exacerbated by the comprehensive levee and flood protection system, is rapidly depleting South Louisiana’s wetlands, which serve as the first line of defense from storm surge for cities like New Orleans, Lafayette, and Houma. These days it seems that Louisiana’s shrinking coastline is a topic on which everyone has an opinion. On the other hand, subsidence—the continued sinking of the land on which the Big Easy rests—has always enjoyed a marriage with the city’s provocative eschatology. In order for it to be part of the New Orleans mythos, it must have alarmed the citizenry for quite some time. But how did the earliest settlers know the city was sinking, before engineering tools allowed for precision in construction or the reinforcement of building foundations? Ordinary occurrences might offer a few hints: the way a single window shutter keeps slamming shut, or the tendency for things to roll off the kitchen counter. Some of these no doubt proved only mild inconveniences, and people may have still attributed them to construction faults. But my recent trip to a hotel in the city revealed proof of The Great Sink in a far more disturbing manner: 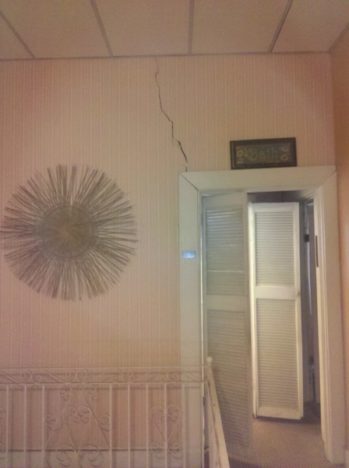 The crack in the wall could roundly be dismissed as an indicator that the building is comfortably settling into its old age. But the “settling” going on here is too literal; it’s ripping the wallpaper apart, and the fissure is almost big enough to fit one’s fingers into it. 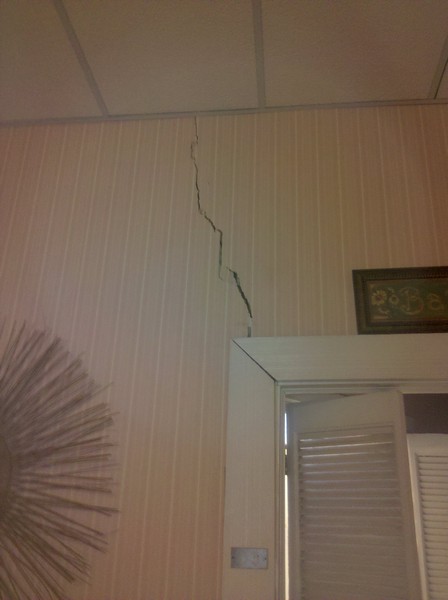 My impression is that this means that the edges of the building are sinking at a more rapid rate than the middle, perhaps because of the added weight of load-bearing walls—even though it would seemingly make no sense to put such walls on the perimeter…at least, in this day and age. The builders of this 150-year-old structure—hardly a masterpiece commissioned by the city’s most celebrate architect—may not have known better. But how are today’s owners supposed to respond? Given the option of shoring up parts of the building or the laissez-faire approach, it would appear that they have hedged their bets that flaws add a certain charming patina…a contributing building to the city’s “character”. Perhaps these owners are comparatively lucky; in many New Orleans buildings, the subsidence is plainly visible from outside.

What causes the city to sink so alarmingly, creating an added burden to homeownership while compromising structural integrity and safety? An article by Morton and Bernier (2009)—and Morton, Bernier, and Barras (2006)—concluded that historical subsidence rates in the southern Mississippi Delta have been induced by the withdrawal of deep subsurface fluid, reducing the pressures in associated reservoirs and further compacting the dense soil. The oil and gas reserves that were discovered in the mid-20th century reached a climax in drilling at about 1970, then slowed to comparatively low rates today. Incidentally, subsidence also peaked in the mid 1980s, paralleling the proliferation and retreat of large-volume resource extraction in the region. Whether subsidence rates will continue to slow—and this hotel owner will have fewer reasons to worry about the property—may ultimately depend on reducing the rate of land loss along coastal Louisiana. Even though land loss and subsidence are entirely different phenomena, they’re linked to the point that localized land loss unfailingly exacerbates subsidence. Diminished wetlands also intensify hurricane damage, storm surge, and wind shear, by scouring topsoil and weakening the ground support. Finally, continued subsidence only puts places like New Orleans even further below sea level, widening the gap between the lowest points of the city and the protective levee system, so that the bowl becomes deeper—and that much more laborious to drain—in the event of a flood.

Fixing the crack in this hotel room is in itself an exhausting process, but it pales in comparison to the metaphoric schism that separates the lowest points of this ill-fated city from the adjacent high ground. Cracks in the wallpaper helped sound the alarm for early French, Spanish, and American settlers that this city’s location would prove problematic, but its ability to flourish in spite of so many challenges demonstrate that the location—always ideal for international trade to upstream locations—could also transcend its shortcomings. That it has continued to do so in the face of the nation’s costliest national disaster is proof that even as the city’s vulnerability has grown, so has its mystique.

PrevThe heart of a state, encased in stone.
Repelling criminals and just about everyone else.Next