The heart of a state, encased in stone.

The average well-traveled person who looks at the remarkably uniform street walls below will likely draw a conclusion that the photo comes from Washington DC. After all, with the alabaster facades, the prosaic fenestration, and—most tellingly—the uniform height of all the structures, the photo could capture a typical avenue in the sprawling central business district (the “Golden Triangle”) of the nation’s capital. 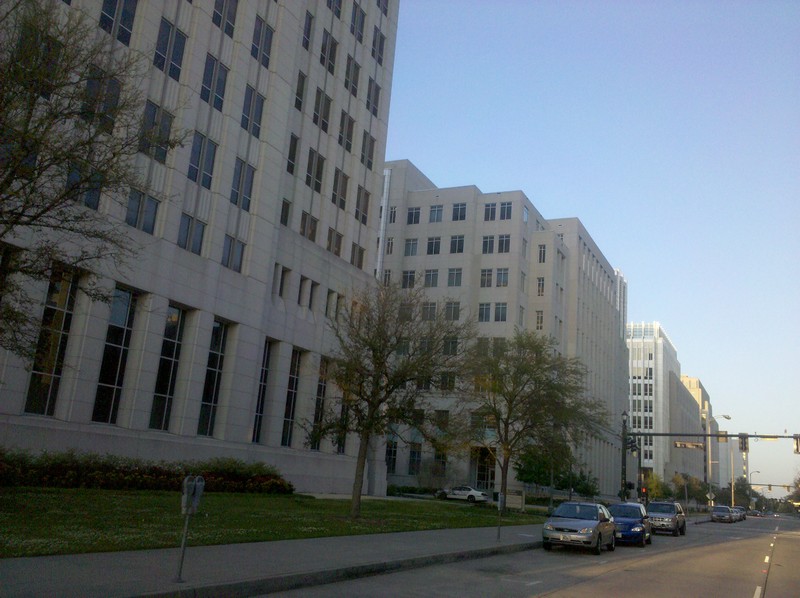 But it doesn’t. The first hint that the photo derives from another city should be the complete absence of pedestrians in this streetscape; Washington would be full of people during daylight hours. The second clue should be the blog itself, which—as some readers are aware—has shifted its original focus, as I have moved for the time being to the Deep South. This photo comes from Baton Rouge, at the southern boundary of the Louisiana State Capitol Complex. 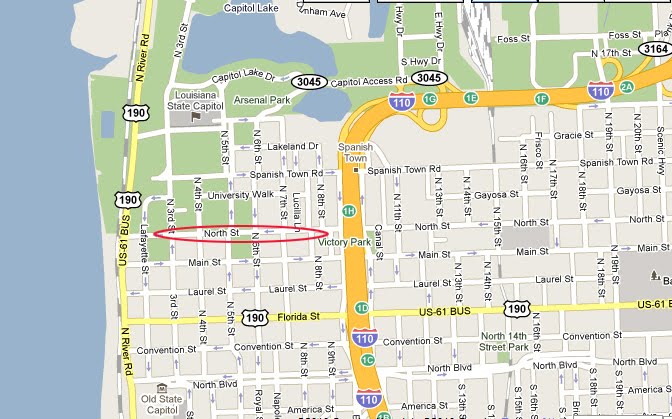 The map above demonstrates this to a certain degree. North Street, circled in red, forms the edge between the central business district and the large city park that hosts the Louisiana State Capitol and the many other associated government buildings. But the key word here is “edge”, which is clearly what the city’s designers have crafted and no doubt hope to cultivate further.

How do I know this is an edge? Just take a look at the buildings that front North Street. Here again is the north side with the Capitol Complex: 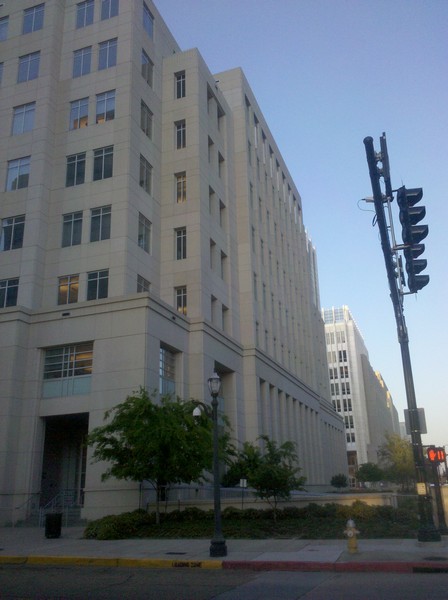 And here is the south side: 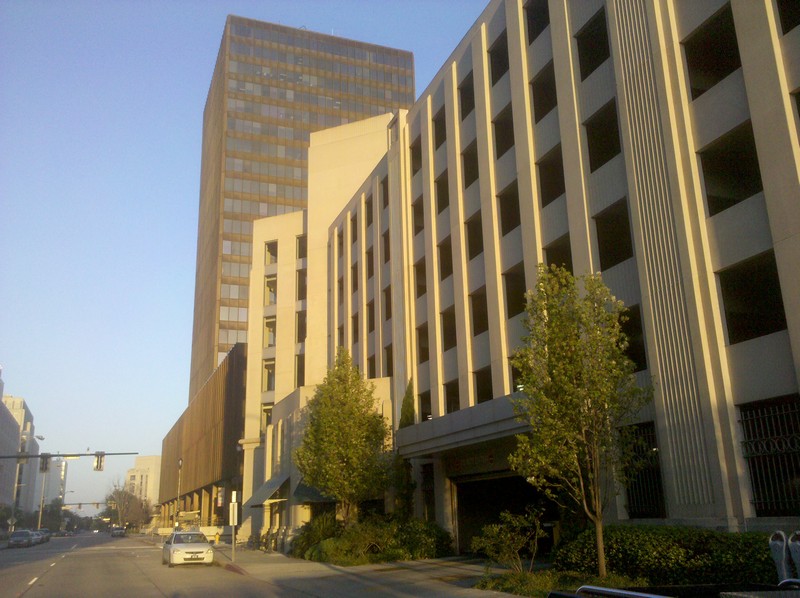 None of the architectural uniformity, no consistent height or street walls, no discernible design standards to speak of. Obviously this isn’t a coincidence: the developers and builders of structures on the south side of North Street clearly receive a much wider berth for designs, heights, building materials, and so forth. But why? Did the city planners zone the area specifically to encourage different architectural styles along the two sides of North Street? According to the zoning map, the classification applies to both sides of North Street: C5, for Central Business District. And according to the Unified Development Code, the specifications for this classification are remarkably simple: “This district allows office and commercial uses within the Downtown Development District without setback and parking requirements. There may be any uses in the preceding sections including restaurants, which involve the sale or serving of alcoholic beverages for consumption on premises.” Surface parking is a conditional use.

So why did the developers on the north side choose to build such similar looking structures? My quick visit to the Louisiana Tax Commission for a glance at the parish tax rolls reveals that no property on the north side of North Street from the riverfront to the 700 block falls under the assessor’s purview, suggesting that this is all tax-exempt public property. Since all other land to the north of these structures falls within the Capital Complex, it is safe to assume (without having spotted signage from my visit) that these pearly white buildings, these alabaster street walls, belong to the State of Louisiana. If I have chosen the tedious, clinical method of determining ownership, the typical passers-by can most likely come to the same conclusion without having to dig through several websites. They can just use their eyes. 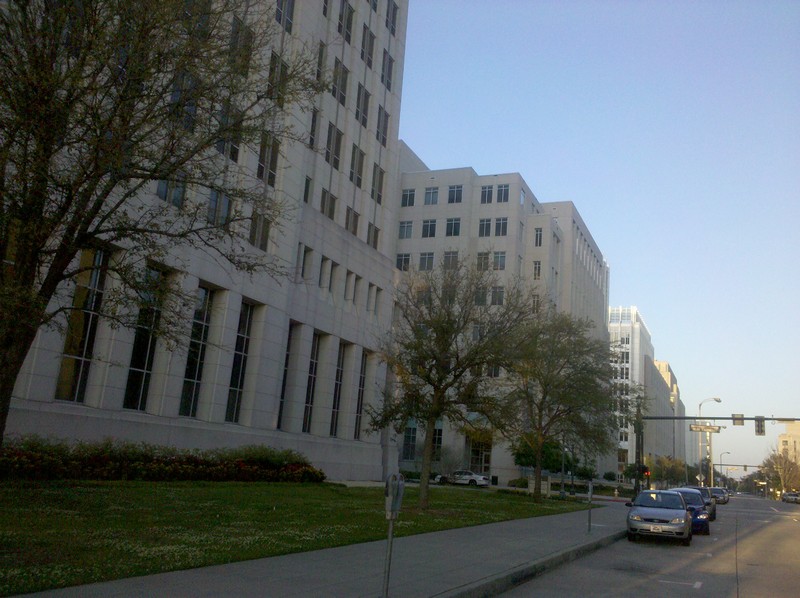 It doesn’t require a great deal of scrutiny to conclude that these properties fall under one owner, and, as evidenced by these street walls, the persons at the State responsible for development have decided to emphasize that singularity of ownership through a purity and uniformity in design. The buildings don’t appear widely variable in age, further suggesting that they collectively fall under a broader master plan for the campus-like Capitol Region just north of downtown. And the fact that they look so different from the other side of the street helps to emphasize the bifurcation of uses, between commercial to the south and civic/governmental to the north. These urban design gestures are not subtle, but they don’t need to be. The planners and the state government have heralded from the highest office that North Street is an edge, visually embodied through the Capitol that protrudes in the distance. 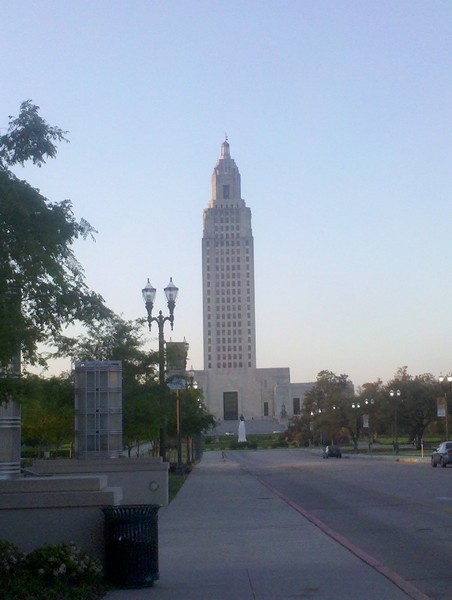 I have featured this remarkable building before, one of the few high-rise statehouses and an enduring symbol of Louisiana, ranking up there with its state bird, the pelican, which famously wounds herself to feed her hungry young on the distinctive state flag. (Contrast this with the fleur-de-lis, which usually holds far greater cogency in French-descended south Louisiana.) The building seems to embody populist Governor Huey Long’s desire for Louisiana’s reinvention, as its construction under his term replaced the old “Louisiana Castle” that still sits as a museum on the other side of downtown, just south of the city center. Governor Long’s most enduring edifice remains the tallest state capital in the country, and it presides over the aforementioned complex, which includes gardens, an old Spanish fort, a lake, and, of course, these many ancillary government buildings. The photo below demonstrates how the structures along North Street form an architectural gateway, when viewed along the perpendicular Fourth Street, which terminates at the tower: 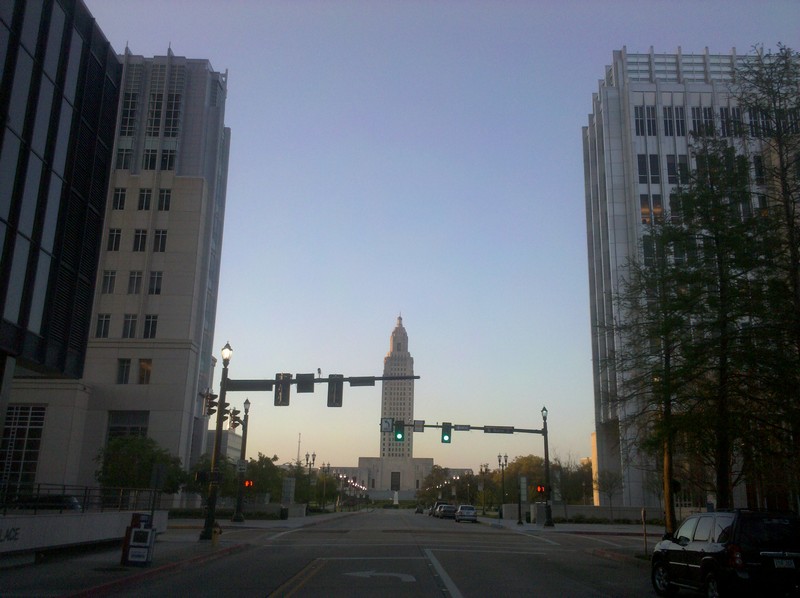 I generally shy away from design criticism, because, in terms of knowledge and experience, I’m hardly the best equipped to do so. So rather than focusing on the aesthetic details, I will at least speculate how well this edge (particularly embodied in the definition of “edge” from Kevin Lynch’s The Image of the City) operates as a means of navigating and interpreting the visual cues that the built environment elicits. At the beginning of this post I remarked how much this row of buildings reminded me of Washington DC, where the strict design controls have promoted a certain architectural unity. Use Google Street View to find a few examples in the downtown of the nation’s capital, or take these two examples, also seen below: 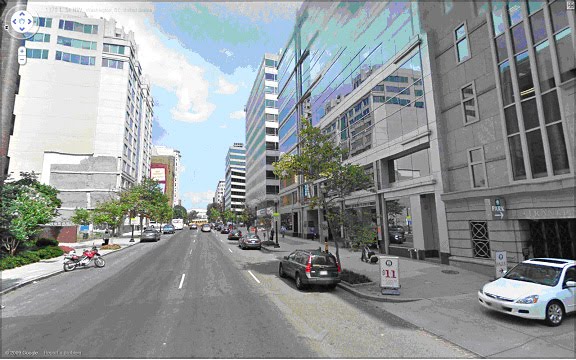 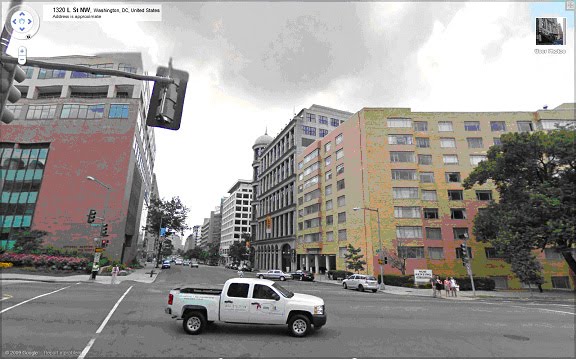 Washington has clearly enforced height limitations, so that nothing within the District can surpass the 555 feet of the Washington Monument. The law has imposed constraints on development—both public and private—unlike anything else in the country: the demand for real estate in the central business district of Washington is extreme, and most developers would undoubtedly hope to maximize their Floor-Area Ratio (FAR) by building up as highly as possible. But height restrictions prevent it, so a developer is likely to seek the only alternative by building out as much as possible, achieving the highest possible FAR through minimal setbacks as it extrudes a building’s massing through the original floorplate, which most likely coincides with the parcel lines. What does this mean in normal English? Buildings look thick and bulky—like the ones in the photo.

And how does this enhance the “readability” of Washington’s urbanism? Well, by many people’s perspectives (including my own), it doesn’t. Throughout downtown Washington, the visitor encounters one street after another with buildings of almost identical height and massing. Few structures have recesses—a developer cannot afford to sacrifice leasable space when land values are so high—so the buildings have nearly the same height and general cubic shape. This homogeneity makes it difficult to distinguish one block from the next. It’s a monotonous succession of street walls.  Navigating and familiarizing one’s self with the streetscape becomes particularly challenging and far less rewarding because fewer individual landmarks or design features will jump out. And, as anyone who has visited the city beyond a touristic tryst can tell you, DC’s central business district is unending. The inheritors of Pierre l’Enfant’s legacy—those who conceived and have continued to enforce height limitations—have created their own urban design challenge through these restrictions, which creative architects zealously confront, compensating for the monotony through embellished façades.

These deliberate photos I have taken of the north side of North Street in Baton Rouge may seem repetitive when divorced from their context, but I think this strategy of architectural homogeneity in Louisiana’s capital city may work a bit better. It is likely that some portion of the Unified Development Code requires that no building surpass the State Capitol in height, but beyond that, architects in Baton Rouge suffer few of the constraints imposed by high demand and ultra-valuable real estate. Setbacks and recesses are an option. The design parameters of North Street also do not apply across the downtown, or the city, or the region. Thus, the change in architectural character creates a powerful delineation, signaling to visitors that they are entering a new district, as seen in the earlier photo with the Capitol building in the background. The view from the opposite direction, at the foot of the stairs of the Capitol and looking onto the government buildings (or the downtown just beyond it) reinforces the visibility of the implicit edge. 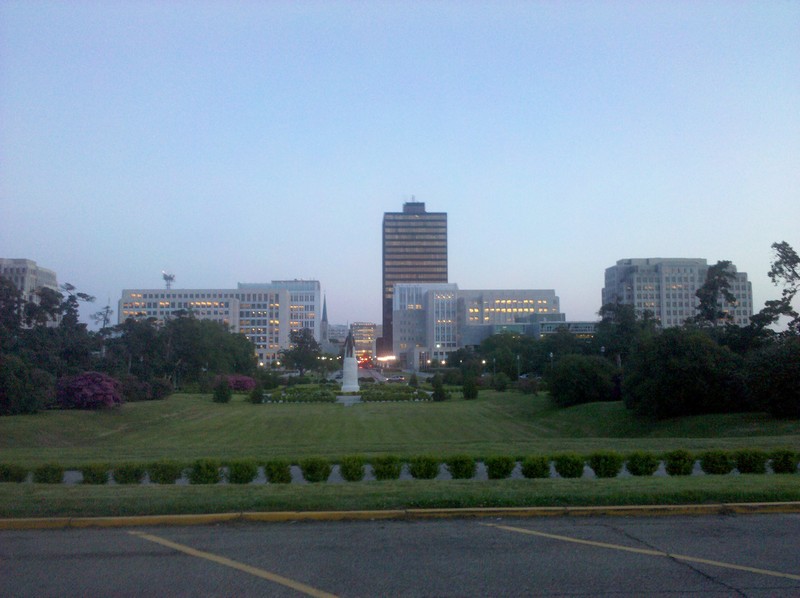 It may improve over time as well, as downtown Baton Rouge continues to build upward, stretching above the structures to which the State has constrained their height.

The biggest negative, in my opinion, is the way this effort at monumentality weakens the overall street vitality. Unlike DC, pedestrians rarely crowd the sidewalks. The government district is divorced from the business district, while only the latter has restaurants, retail or most daily services. Thus, one major employment hub (the commercial/retail downtown) fails to earn any full advantage from the other employment hub (the State). The Capitol Complex, with all those street walls, is too sprawling to encourage many government workers to walk southward for lunch; Huey Long’s statehouse is so far away that I’m certain it must have a built-in cafeteria, or else its staffers would have little choice but to bring their own lunch. Baton Rouge downtown is thus a separation of uses writ large. It has a few lively blocks of restaurants, but with no thanks to the government workers, who would most likely only patronize the downtown stores after hopping in their cars. And who wants to deal with downtown parking during the weekdays at noon?

The scale and positioning of Baton Rouge’s most important civic buildings, creating two street walls that flank the high-rise statehouse, may help the city achieve a level of monumentalism that surpasses most other state capitols. These gestures certainly make the visitor aware of its importance within the state. The bold simplicity employed by the architects of the Capitol Complex, coupled with the sheer size of the surrounding green space, endow this part of city with an unmistakable centrality. But why would it boast such an elevated position in a nation famously suspicious of government? The grounds around the Louisiana capitol are hardly Versailles, but they do convey a power uncharacteristic of the citizens’ aspirations, many of which credibly align with a smaller, limited government intended to serve and represent the people rather than preside over them. (Incidentally, it appeared that a local rally for the Tea Party Movement was winding down at the time that I took the last picture.)

Both Baton Rouge and Washington (and many other capitals) have attempted to reconcile two somewhat contradictory forces: the urge to instill prestige in the sub-region that most clearly signifies the district governed; and the recognition that a grandiose display of plazas, gardens, and monumental buildings must still humbly preserve and embody democratic ideals. The National Mall of Washington DC is the United States’ front yard, and it remains the enduring image used to represent the country as nation-state with a clearly definable system of governance. The Capitol Complex achieves much the same purpose for Louisiana. As Baton Rouge fills some of its remaining vacant lots with new structures or civic uses—and as downtown DC becomes even denser with stout edifices packed along the broad avenues—the design of these cities will continue to evolve, with both agreed-upon successes and specious remedies to mistakes from the past. Most critical is that the urban design leadership continues to aspire to that balance between monumental grandeur and ecumenical representation.