Hurdles on the runway.

For the most part, the scale of a city’s major institutions correlates directly to the metropolitan area’s size and economic power. Metros like New York and Chicago win the flagship luxury department stores, they have the highest number of super-tall skyscrapers, the biggest libraries, movie theaters, power plants, and so forth. Obviously Boston’s Fenway Park and Chicago’s Wrigley Field prove an exception to this trend, since the humble sizes of these stadia belie the heft of their respective cities. However, both cities claim many more alternate sports venues than much smaller communities such as New Orleans, Indianapolis, or Salt Lake City, so the total square footage of athletic facilities in the major metros roughly parallels the number of people.

One of the few major industries, however, where the importance within a locale routinely defies the city’s relative size is in commercial airports. For example, Ohio’s Port Columbus International (CMH) sits squarely in the center of the country’s seventh most populous state and is within ninety minutes’ flying distance of over half of the nation’s population. It is by far the fastest growing and most economically healthy city in Ohio. Yet the passenger traffic (measured by the FAA) at the airports of Cleveland (CLE) and Cincinnati (CVG) eclipse Port Columbus by far; despite being a relatively slow-growth metro of similar size, Cincinnati’s passenger traffic nearly doubles that of Columbus. Future forecasts suggest this is unlikely to change. Conversely, Salt Lake City’s metropolitan area is only a little over half that of metro Columbus; its vigorous economy suggests that it will grow increasingly prominent over time, but at this point it has a long way to go to equal Columbus’ size. Yet its airport (SLC) receives triple the passenger traffic of its Midwestern counterpart.

These disparities make fundamental sense, and it doesn’t require much scrutiny to see why. The biggest factors influencing the prominence of a city’s airport are 1) its historical size in relation to neighboring cities; and 2) its geographic proximity to other centers of commerce. In terms of both of these factors, the deck is stacked against Columbus. It was historically nowhere near as large of a city as Cincinnati just 110 miles away; the latter community achieved prominence at a much earlier date and therefore justified the aviation infrastructure worthy of its size. Columbus has only risen to the higher echelon of Midwestern cities in recent years. Meanwhile, Cleveland surged in the early 20th century to become Ohio’s largest metro, which it remains to this day (though if growth patterns in Columbus and shrinkage patterns in Cleveland continue, Columbus may eventually dethrone the Forest City). And Salt Lake City’s prevalence has less to do with its current impressive growth—it certainly didn’t demand a major airport forty years ago—than its relative isolation, with no other major city of any reasonable size within a 350 mile radius. 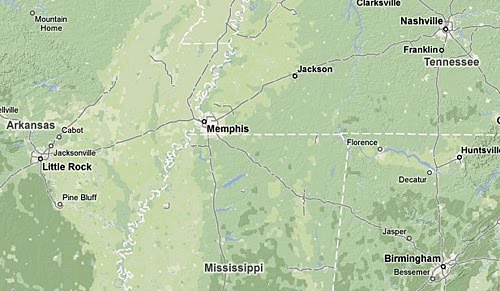 Such aviational curiosities culminate with the unlikely prominence of Memphis International Airport (MEM). The metro area is not growing at anywhere close to the pace of Columbus or Salt Lake City, or, for that matter, the state of Tennessee’s booming capital Nashville, which has surged past metro Memphis in population. But the Memphis airport still averages at least a half million more passengers than Nashville’s in any given year, it remains a hub for Delta (formerly Northwest) and routinely flies to Amsterdam, and, most significantly, its role as the super-hub of FedEx Express has substantiated the airport’s reputation as the number one cargo operator in the world. In spite of these logistical advantages, Memphis was a higher profile city several decades ago, back when the local leadership assembled parcels for this moderately busy airport. Since the mid 19th century, several other urban centers (Nashville and Charlotte in particular come to mind) have shimmied up the ladder at a faster rate, but Memphis Airport still retains its extensive infrastructure—with room to grow—and its unsullied title as the capital of the Mid-South. As the map above indicates, no city of comparable size sits within three hours’ drive; even Nashville rests over 200 miles to the east. But its central location within the South in general makes it a remarkably convenient midpoint; most Southerners have undoubtedly experienced a layover in Memphis when flying Delta.

But is the Memphis Airport Authority thinking in terms of future growth? Some urban prairies to the west of the terminal, where eminent domain allowed the purchase and demolition of private residences, suggest that newer or larger runways form a part of the airport’s future. But the airport’s interior features suggest otherwise. 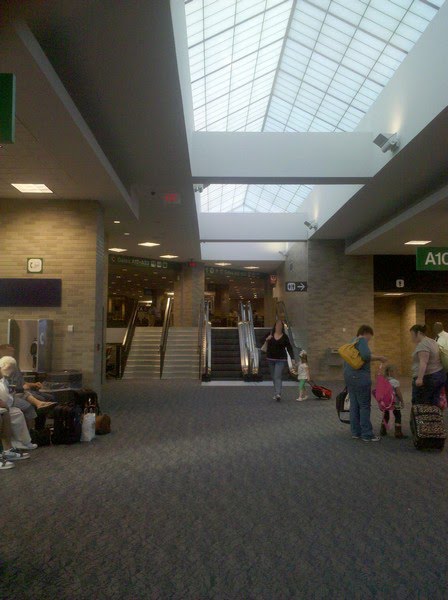 This photo, taken near the end of one of the sections to Concourse A, while looking back toward the central terminal, reveals an unlikely impediment: a short stairwell. About seven gates operate on the side of the stairwell from which I am taking the above two photos, while the vast majority of the concourse’s gates are on the inner portion of the concourse, closer to the vertex of these lengthy halls. Seen from the other direction, the stairwell and its respective change in elevation offer a distinct visual contrast. 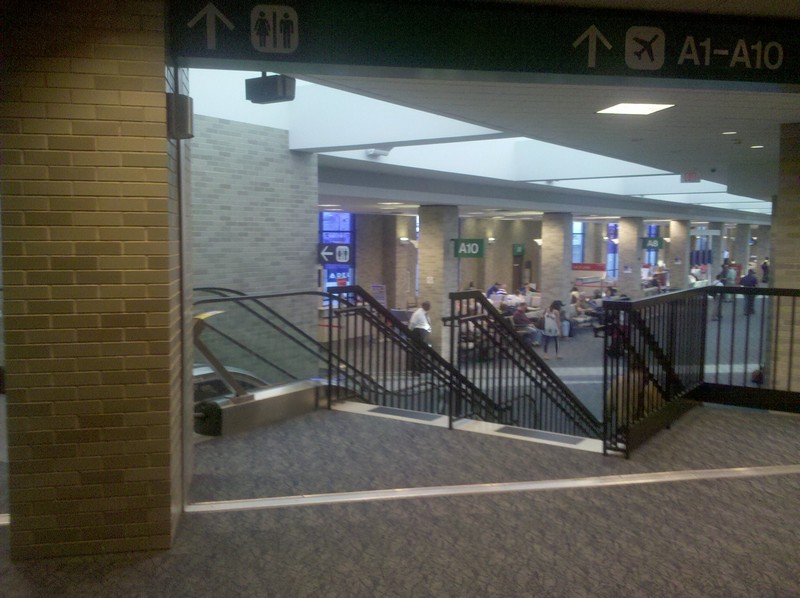 Fortunately, the authorities at Memphis International aren’t dodging the stipulations of the Americans with Disabilities Act; an alternative to the stairwell and escalator is nestled in a corner just to the right of the above photo. 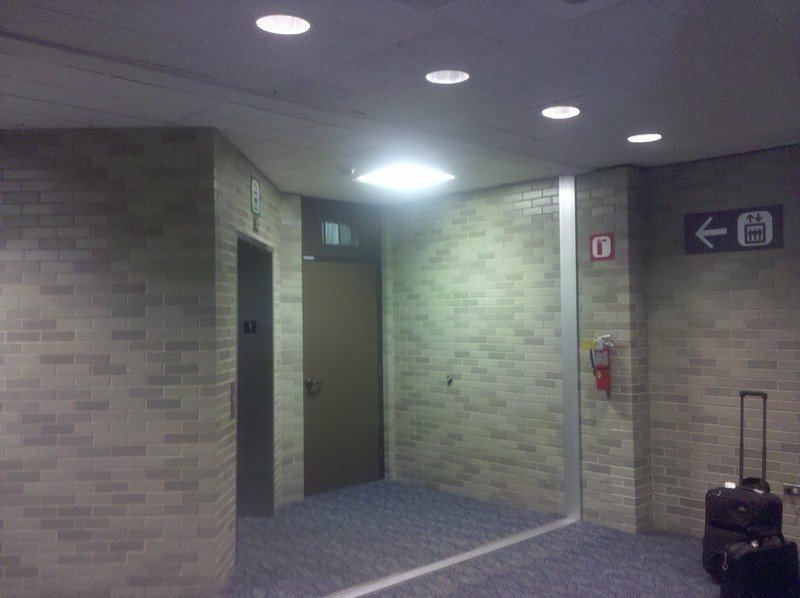 The elevator helps to avert a potentially serious problem for disabled persons with a reasonable solution. But this reasonable solution isn’t exactly modern. The elevator is only conspicuous from the lower level—the most likely destination for those using the stairs—and most people, unaware of its existence, struggle to negotiate their wheeled luggage down the stairwell or escalator. 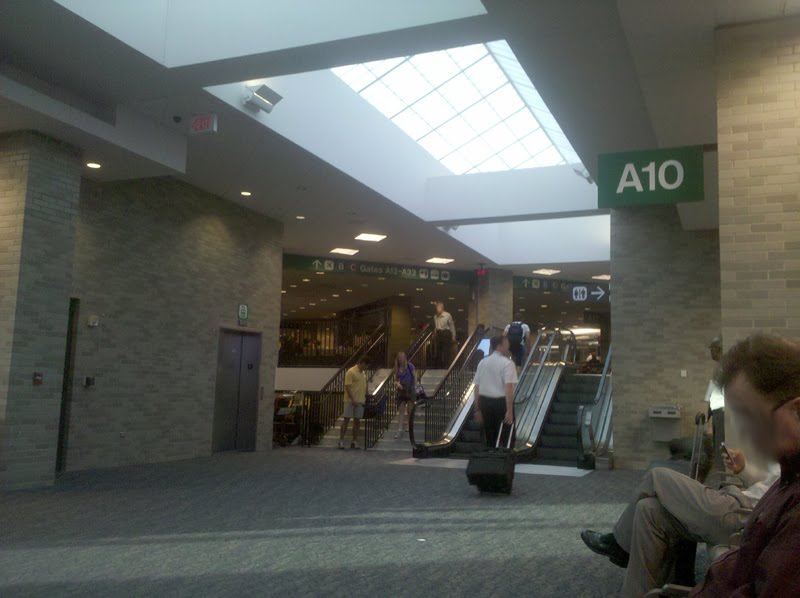 Now I’ll be bold and draw a broad conclusion from this minor stairwell obstruction. The leadership at Memphis airport, aware that their city handed the flag to Nashville long ago, has stopped thinking of itself as a critical airport for a prominent city. Its role as a cargo hub remains auspicious, but other cities with lesser airports may soon surpass Memphis’ infrastructure to support commercial flights. The airport’s tidy but faded interior—and its casual negligence of inconveniences such as the one captured in this photo series—collectively diminish the sense that this airport is scrutinizing a future in which it remains a major player in the field of commercial aviation.

Perhaps I’m splitting hairs by pointing this out. But a stairwell in the middle of a concourse is downright weird. I can’t think of where I might have seen it before. While persons in wheelchairs will always have the elevator, what will they do if a sudden evacuation precludes them from using electrically operated conveyances? Why didn’t the authorities at Memphis International install ramps? Ramps would benefit customers with suitcases, strollers, and Segways just as much. The absence of another, better way of managing the grade change here suggests that airport leadership made an effort to fix its problem by installing an elevator with the passage of the Americans with Disabilities Act and then hasn’t thought about this part of Concourse A ever since. And the ADA passed during the George H. W. Bush administration. As is often the case, this nonchalance toward humdrum spaces dampens the overall appeal of this otherwise perfectly decent airport, while capital improvements apply disproportionately to the showy centerpiece of Concourse B. Memphis may not be an Atlanta, but it also pulls a lot more weight within the south than Little Rock these days. One can only hope that the leadership of this Super-Hub for the Mid-South will prioritize universal design as an aesthetic the next time the place is due for a renovation.

4 thoughts on “Hurdles on the runway.”