A new shade of pastoralism.

An exploration in unfamiliar territory can often make the typically mundane landscape features pop out. This doesn’t require a great understanding of psychology: when we don’t know our surroundings that well, the employment of the senses becomes more of a conscious act. Much of western Kentucky, of which I am more familiar, is embedded in the agrarian traditions of the lower Midwest, with endless acreage of cornfields, presided over by lumpy foothills that usually sit some distance from the road. Eastern Kentucky’s highways capture some of the most august Appalachian vistas, with nary a square foot of land that could truly be considered flat—the sparse population merely draws more of the visitor’s gaze to the topography. And what remains is central Kentucky, south of Cincinnati and east of Louisville. This Inner Bluegrass Region may offer one of the most powerful agglomerations of industry in the country that still falls within a rural milieu. Kentucky’s enduring icon—the thoroughbred—owes its association with the state primarily through the pastures surrounding Lexington. A simple Google search using some combination of “Kentucky”, “horse”, and just about any third word of choice reveals an incredible concentration of establishments in the center of the state.

The emergence of “horse country” no doubt explains why a new painterly accent emerges upon the landscape as one travels along Interstate 64, west of Frankfort, toward Lexington. 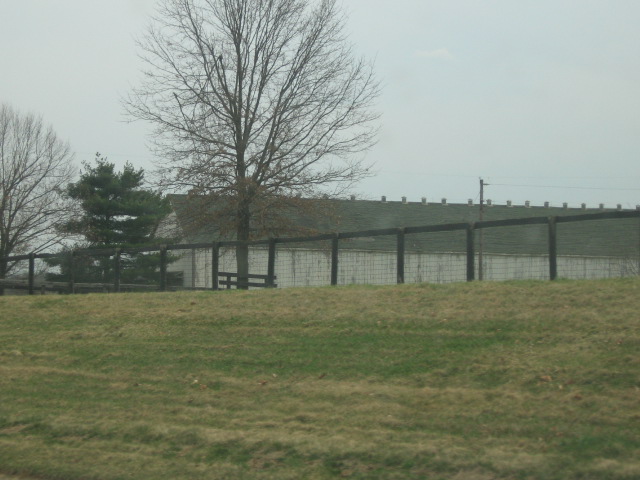 Fencing along the interstate is virtually unheard of in the Midwestern Corn Belt, for obvious reasons. But along this stretch of highway, it is ubiquitous.

So the horse farmers and breeders of central Kentucky need to protect their most critical assets through a predictable, straightforward impediment. But is that all that is distinctive about these fences? Though hardly the dominant use of the land, cow pastures are still relatively commonplace throughout the lower Midwest, and yet the fences around dairy farms are unlikely to leave as strong of an impression. They only occasionally punctuate the verge of a road that is otherwise overwhelmed by cornfields, and the fences lack uniformity—farmers adapt a hodgepodge of structural approaches to prevent cattle from escaping or predators from intruding. Horse farms in central Kentucky not only dominate the landscape, but they seem dependent on a single design for the fencing. The lines of charcoal leave a powerful impression against the tepid green backdrop of early spring. 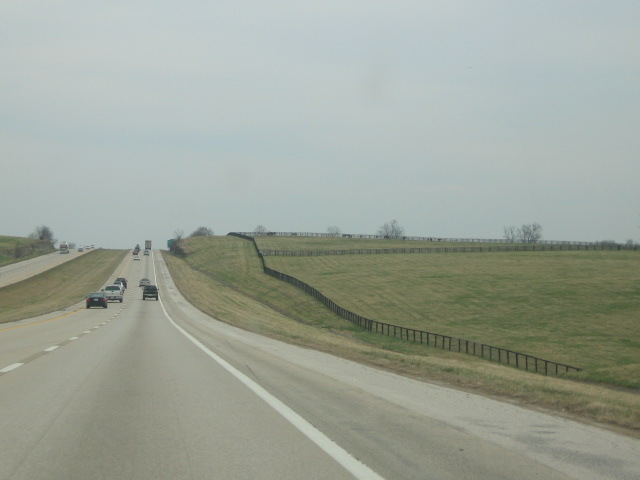 The black fences straddle both sides of the highway, and I offer my regrets that I failed to capture this in my photos. So why black? I think it looks fantastic, but are the black fences solely to impress other people who are as easily impressed as I am? Surely it’s not aesthetics—the plots of land are too vast for that to likely even enter into the consideration of the proprietors.

In his book, Common Landscape of America, 1580 to 1845 [Yale University Press, 1982], John Stilgoe observes that early English colonial fencing strategies borrowed heavily from European design, echoing the old continent’s need to conserve wood when under constant threat of scarcity. But as soon as the settlers realized that North America enjoyed an abundance of forested land—within a decade of Plymouth’s founding—wood quickly replaced stone as the principal means of containing livestock. And before long, topography and climatological differences across the eastern seaboard prompted further ramifications in fence design, so that various regions used distinct vernacular fencing styles, with appearances as divergent as the construction and architecture of their homes. New Englanders were more conservative by necessity—only the infrequent valleys and plains between granite protuberances supported much agriculture, so farmers had to engage in careful crop rotation, while staying put on their smaller plots of land. They couldn’t move frequently to stake new territory because there was virtually no fertile land nearby. Southern colonies, particularly the Mid-Atlantic tidewater and piedmont regions, enjoyed an abundance of rich soil suitable for the increasingly lucrative cash crop of tobacco. These settlers moved routinely because tobacco exhausted nutrients quickly, yet it paid so well that they had little incentive to rotate the land with less profitable alternatives. Thus, Virginia and North Carolina (and eventually the less mountainous parts of Kentucky) hosted a much more transient population, far less likely to cluster in large settlements than the booming mill towns to the northeast of the Hudson Valley. Essentially, bad soil helped accelerate the industrialization of New England, while doing the opposite in Jefferson’s Virginia.

The fencing designs reflect this remarkable divergence in settlement patterns between the North and South. As Stilgoe continues:

“[S]outhern colonists firmly believed horses, cattle, swine, and sheep could fend for themselves in the temperate climate and lush woods. Men turned out livestock to graze on native grasses and cane. . . Although conservative settlers warned that such stock would become almost wile, Virginia and later Maryland, the Carolinas, and later Georgia made official the open-range system and required all settlers to fence in not their livestock but their fields of corn and other crops” (p. 62).

The coupling of this ethos with the almost nomadic approach to tobacco cultivation elicited the archetypal worm fence, a seemingly crude stack of split rails that join at obtuse angles, creating a zigzag pattern. It required no vertical posts. To the untrained eye, the worm fence seemed shamefully flimsy, but it required little time investment due to the ease of assembly, and it generally achieved its goal of impedance—particularly when it was used primarily to protect crops from intruding wildlife rather than to retain grazing livestock. Worm fences could last for over twenty years, and they were easy to dismantle when farmers had exhausted their soil of nutrients and needed to move on. New Englanders did not have it as easy: they needed to extract numerous fieldstones from the ground and continued to depend on difficult, laborious stone walls as enclosures (p. 189-90). 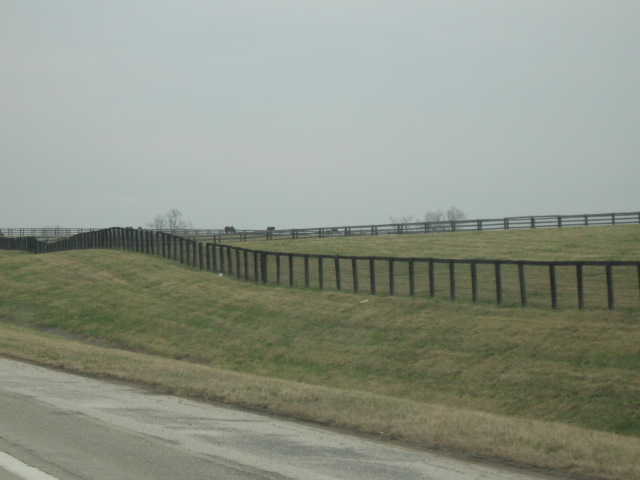 My speculation is that the post-and-rail black fences that stretch across central Kentucky loosely fuse the northern and southern colonial paradigms. Early settlers attempted dozens of varieties of post-and-rail fencing; while this design wasted the least space of all the varieties, the vertical posts tended to rot quickly. The limestone beds that saturate the Ohio River valley endow the soil in central Kentucky with a high concentration of calcium and foster the growth native bluegrass, making particularly suitable pasturelands for horses. But horses apparently have a greater tendency to wander than other, grazing livestock, placing them in particular danger of high-speed traffic along the interstates. Regardless of the history of the open-range farmsteads further south, Kentucky horse farms need fences. My research indicates that black color of the fencing in the above photos is probably due to the layering of creosote, most likely of the EPA-approved wood tar variety. This widely used preservative can protect the wood in the black fences from rot, mold, shrinkage, and termite infestation. In addition, some forms of creosote serve as a repellent to horses, who may otherwise try to chew or eat the wooden posts.

Kentucky’s horse fixation is indelible, but horses themselves are easy to come by in just about any place where they can survive the climate. Horse farms—the breeding of thoroughbreds as an industry—are the portal to the state’s unique relationship with animal. The Lexington area has managed to massage a bit of cultural tourism out of the concentration of horses there, but is it really as visible of an opportunity as it could be? With an unemployment rate hovering around 11%, even Kentucky’s venerated horse industry is feeling the pinch, with reports of a spike in abandoned animals across the Inner and Outer Bluegrass Region. While I would hate to devalue the industry by reducing it to a tourist commodity, it could offer a chance for proprietors to connect with horse-lovers at a time when revenues are down. Advertisements along the highway are non-existent. No doubt the state has prohibited billboards, and I won’t begrudge the citizens for defending the pastoral character against commercialization.

I don’t know if Kentuckians hold their creosote horse fences in the same regard as the British do with their fences made of stone, or New Orleanians prize their gas lamps. But the remarkable sprawl of immaculate charcoal black fences between Frankfort and Lexington offer an excellent opportunity for expanding upon the horse farm brand to inevitable curiosity seekers. These black fences could serve as a gateway for the entry to horse country—it already feels a bit like one—but it isn’t necessarily conspicuous to those who aren’t attuned to it. The potency of the image is already there, but the associative linkages remain tucked away. Reinforcing this association without overt advertisements may be challenging, but the most difficult aspect—to interrupt the landscape’s monotony with something new—already sits there as an organic piece of agrarian vernacular. Kansas has its yellow brick road; Kentucky already has the interesting topography to surpass it.

2 thoughts on “A new shade of pastoralism.”