It’s not just for the Dutch anymore. The inclusion of infrastructure to accommodate bicycles has, at least in the US, finally entered the mainstream, most likely far later than in most other developed countries that are less dependent upon the automobile. While some large American cities introduced segregated bicycle facilities as early as the 1970s, it did not become a widespread urban infrastructure improvement practice until the 1990s. Today, nearly every large city has at least some form of bicycle accommodation, whether in the form of bike lanes, multi-user paths, grade-separated sidepaths, or another means of visually identifying a right-of-way in which bicycles achieve some recognition. It would not be particularly bold of me to assert that bicycle infrastructure has become a popular means of instilling a city with “progressive” cachet—a badge worn with pride by local boosters who can claim to recognize what was a fringe group thirty years ago, before bicycling enjoyed a widespread reawakening. Organizations like the Bicycle-Friendly Communities Campaign announce annual awards to a new league of cities each year, bestowing Bronze, Silver, Gold, and Platinum to municipalities that have made a clear effort to make bicycling easier through public works investments.

The cynic in me suspects that some of these widely proliferating bicycle initiatives border on insincere kowtowing to a certain population in order to elicit the impression of urban coolness more than a genuine desire to make bicycling safer. Why? Because organizations like the League of American Bicyclists have certain numeric benchmarks that cities can strive to achieve in order to earn the coveted recognition without necessarily being particularly useful. Thus, a city’s public works department may install bike lanes along the margins of roads that otherwise remain neither desirable nor safe for bicyclists, such as the frontage roads around the Philadelphia International Airport that I mentioned months ago in my extensive post on Complete Streets. Cambridge, MA has resurrected Frankenstein’s monster through its bike network, stitching fragments of lanes and sidepaths wherever the road offers sufficient space, without bothering to make the lanes contiguous or responsive to demand. The result is an inconsistent patchwork of lanes that come and go, which may be more hazardous in some locations than leaving them out altogether. Indianapolis, meanwhile, has created a system of numbered routes marked by specialized signs (not the generic green and white ones), yet none of these “routes” correspond to any infrastructural improvements that might help bicyclists. The City thus spent a fair clump of money spent on cosmetic enhancements for roads that often remain quite dangerous for bicycles. Thus, in a desire to win accolades from the progressive bike advocacy community, city leaders dish out the dollars for improvements without necessarily contemplating whether they achieve the fundamental goal: improving safety and mobility for cyclists. My guess is the Bicycle-Friendly Communities Campaign and similar agencies have become more selective in recent years at bestowing honors to these ingratiating cities, but the fact remains that a great deal of bicycle infrastructure focuses more on looks than operationality.

But I hardly want to dwell on the negative here, especially when many communities are promulgating creative, workable solutions to the challenges of urban bikability. One subtle example recently came to my attention in the Capital Heights neighborhood of Baton Rouge. The signage on a quiet residential street is the first indication that something is out of the ordinary: 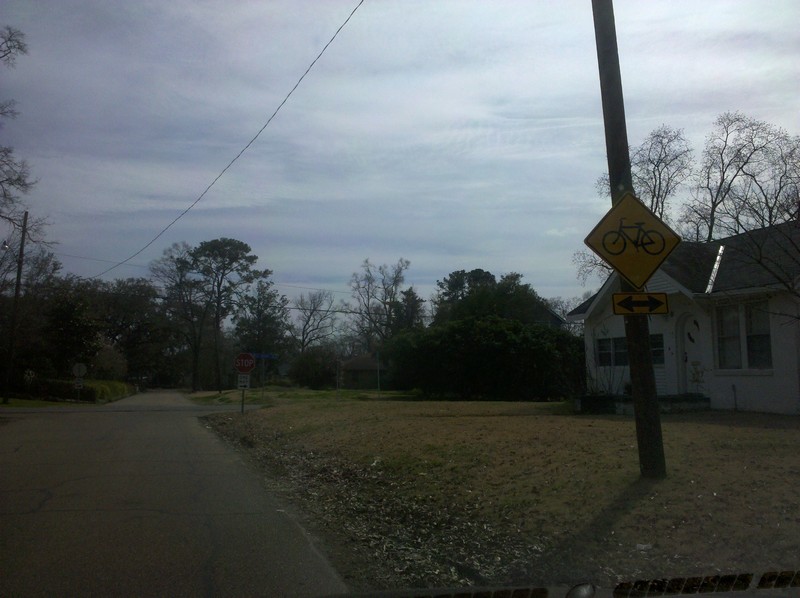 In the foreground to the right of the photo is a yellow caution sign indicating two-way bicycle travel, yet further to left and in the background, a stop sign indicates that the perpendicular street is one way to the left. How does this work? It’s as simple as it sounds. 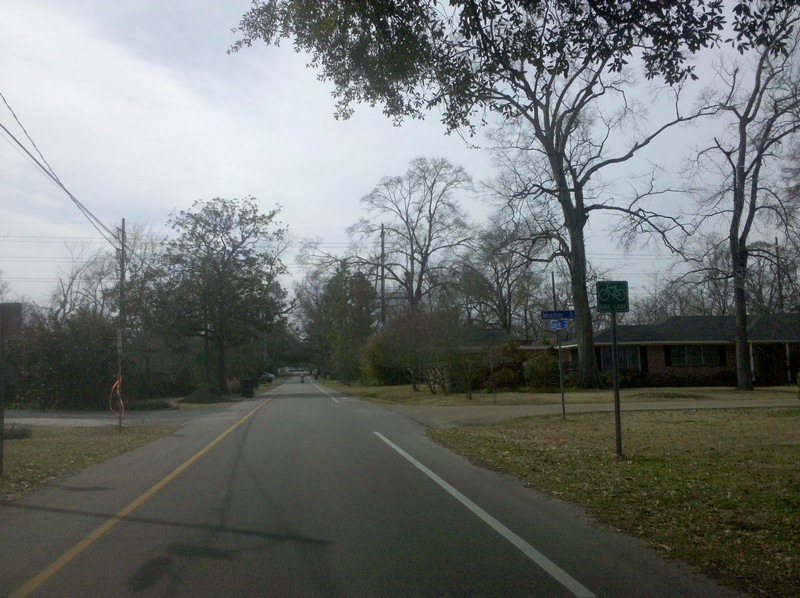 Now sitting on Capital Heights Avenue, the demarcation of the rights-of-way becomes clear: the margin with the white line travels with the traffic, while the margin with the yellow line travels against it. (The street section wouldn’t be complete without the universal “bike lane” sign in the grass to the right, a sign referenced earlier in this blog post.) This intervention on behalf of bicyclists is not particularly intrusive; it most likely did not require any road widening or eminent domain proceedings on the abutting property owners. Nor is it radical: I’ve seen it before in Burlington, Vermont, and I’m sure plenty of other communities have replicated the practice. What is particularly interesting to me is that the road seems the perfect width for two cartways, suggesting that, prior to the introduction of the bike lanes, Capital Heights Avenue was a two-way street. The photo below approximates the perspective of a bicyclist traveling against the traffic flow. 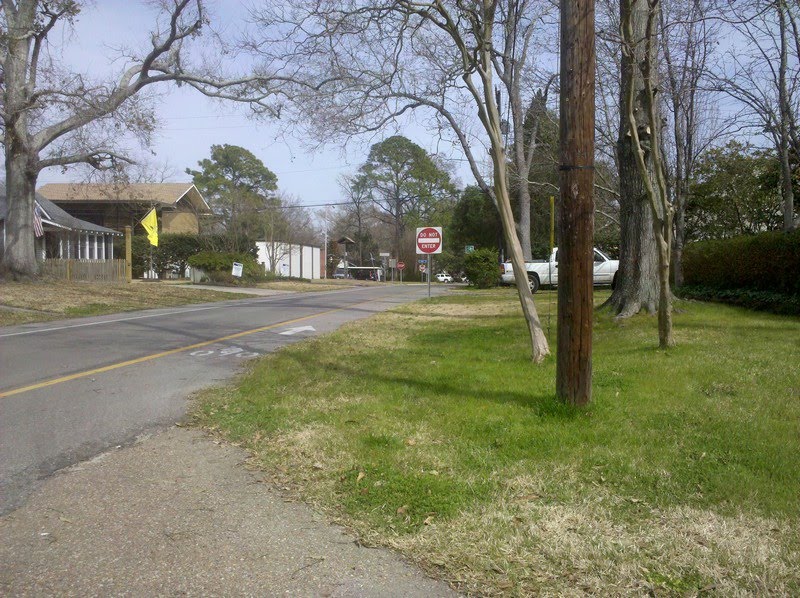 The physical features of the surrounding neighborhood suggest that this simple striping and signage could have proven a greater challenge than it would appear. As is clear from the above photos, Capital Heights’ housing is not new, but it is by all estimates a stable and safe neighborhood. Originally founded in 1909 as one of the city’s first true suburbs, the community is now engulfed by urbanization on all sides. Despite the absence of sidewalks and its exclusively residential character, Capital Heights feels relatively urban thanks to the density of the housing, the proximity to storefronts on collector roads like Government Street, and the basic grid structure, as indicated by the map below, where Capital Heights Drive (circled in red) comprises the clear east-west spine. 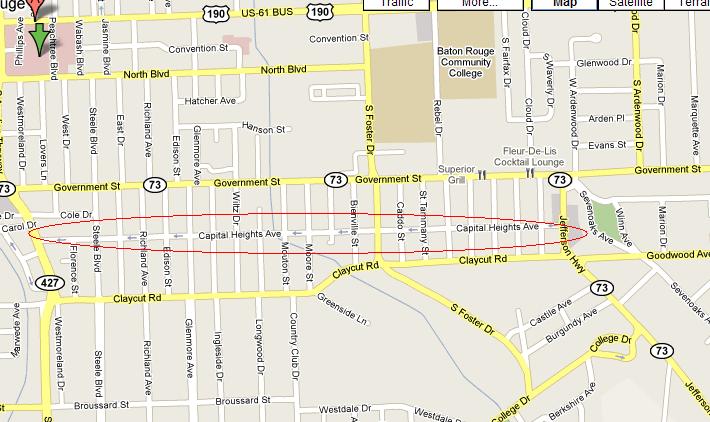 The challenge thus lies in winning the approval in the neighborhood for such a project. How difficult would it have been to convince the residents nearby to sacrifice bi-directional mobility in their cars, when that sacrifice exempts bicyclists from the one-way requirements? The very fact that this bike lane striping exists suggests to me that a preponderance of the community perceived of bike lanes as an amenity that outweigh the disadvantages. Perhaps, although Capital Heights lacks sidewalks, residents of the neighborhood recognize that their neighborhood offers a relatively urban milieu and that boosting the options for mobility will draw positive attention to the area, improving desirability and perhaps property values as well. It could prove a useful trajectory for people biking to and from work in downtown Baton Rouge (which lies less than two miles to the west) and endows the community with some of that “progressive” cachet that seems to be widely coveted among urban professionals.

Measured from these standards, the bike lane is a success if the appeal of this uncommon method of bike lane striping outweighs the negatives of eliminating eastbound travel. Beyond that perspective, any assessment of the overall utilitarianism of such striping results in a stalemate, in my opinion. It clearly demarcates a useful path for bicyclists that serves as an alternative to busier streets such as Government to the north (which offers high traffic volumes, often at higher speeds would be allowed in a more dense urban environment) or Claycut Road to the south (which essentially operates as a narrow, high-speed collector with no urban traffic calming whatsoever). But would Capital Heights Avenue be dangerous for bicyclists otherwise? I’m not convinced that it would be. It is a residential street which speed limits rarely (if ever) above 25; many of the perpendicular roads require a complete four-way stop; and the straight-line trajectory in a grid configuration eliminates blind curves.

Thus, the striping of bike lanes on a generally bicycle friendly street while reducing automobile traffic to one-way only results in a net loss of mobility, with cars ending up as the losers—and, let’s face it, cars are far more likely to use this road on a daily bases than bicycles. A true urban advocate would rebut, “Who cares if cars lose some mobility? They’ve had they’re run of the land since they were invented!” I would concede, but in viewing this in terms of aggregate benefit it still would seem a negative, mitigated slightly by the sheer “sex appeal” of a clever bike lane plan which the City of Baton Rouge can brag about as it achieves new recognition as a bike friendly city. (It was awarded Bronze last year.)

The installation of this lane shows more careful scrutiny than the hit-or-miss lanes of Cambridge, or the signs marking bike routes in otherwise bike-unfriendly locations. But Baton Rouge is also filled with “sharrows”, a pavement graphic that emphasizes generalized road sharing between bicycles and vehicles. That’s great that the city again recognizes bikes, but unless these symbols correlate and contrast with other routes in the network where bicycles benefit from segregated lanes, what does the sharrow achieve other than a cosmetic acknowledgement that bicyclists exist? That very acknowledgement may distinguish Baton Rouge from some similarly sized communities, and I applaud them for that. But the planners and strategists in this steadily growing southern capital city may still let their bird’s-eye-view ambitions supersede the actual visible needs on the ground.

One thought on “Improving urban bikability amounts to more than just spinning wheels.”