From silos to steeples—painting the town green.

In less than a decade, the color/adjective in this blog entry’s title has infiltrated common parlance so effectively that practically anyone who regularly tunes in to a national media source is well aware of the word’s ascension to a widespread lifestyle choice. Long the dominion of ideologically driven crusaders who often saw ecological insensitivity as a direct consequence of the moral laxity embedded in free market forces—a negative externality writ large—“going green” has become almost ubiquitous because its strongest advocates have in large degree dexterously tiptoed around overt partisanship. Green might still be political, but it’s not just referring to a Party aligned with skeptics of capitalism that consistently captures less than three percent of the vote. Though some will undoubtedly disagree with me, I believe the green movement has been tamed—perhaps even domesticated—by shifting its aims to attract the milquetoast moderates. Most reformist campaigns suffer some dilution in order to reach the mainstream, often sacrificing their most ardent supporters in the process. This is often the price that such a movement must pay in order for its ambitions to permeate society enough to effect measurable change. Whether its previous guises were too radical, too Rousseauan, or too removed from a supportive financial base, environmentalism shows increasing evidence of ecumenicalism that broadens its impact as it loses the bite of moral imperative.

Have I unfairly conflated the contemporary green movement with other ecological initiatives? Probably. But the non-discriminating public at large typically ingests transformative intellectual endeavors through broad gestures, and since I am trying to examine this phenomenon at an extreme macro level, it is only reasonable that I make similarly facile associations to substantiate my examples. With those glittering generalities said, I will introduce one of the best case studies that suggested to me that the current green movement has staying power. The town of Greensburg, Kansas suffered a catastrophic tornado (measuring 5 on the Enhanced Fujita scale) on May 4, 2007. The photos below, taken by Kevin Snyder, demonstrate exactly what it looked like from a worm’s-eye-view just days after the storm. 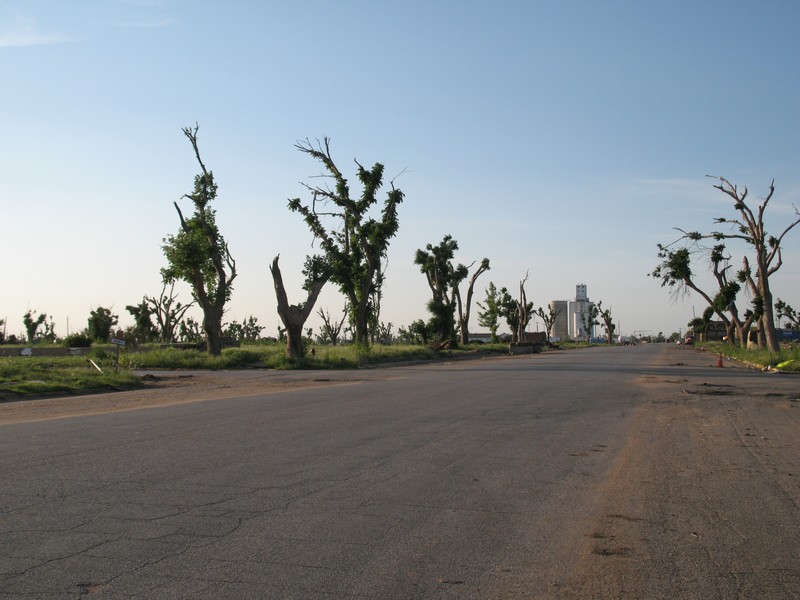 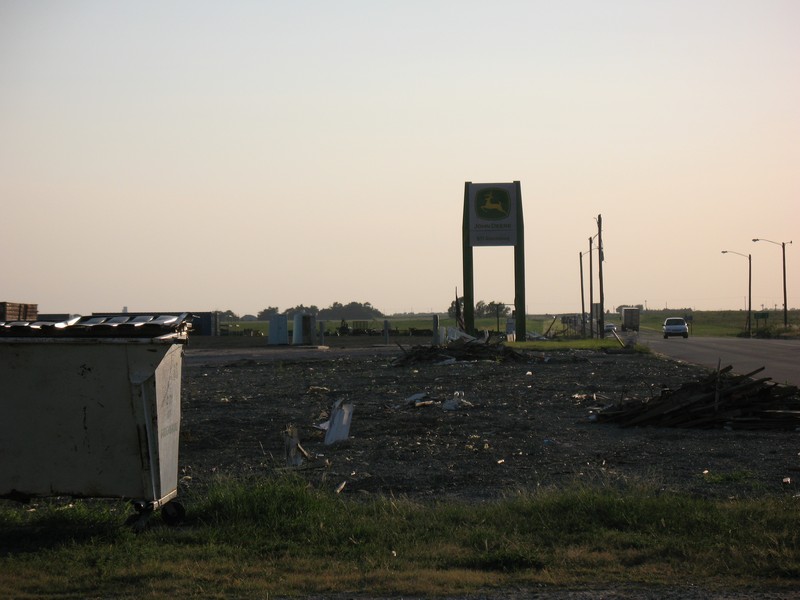 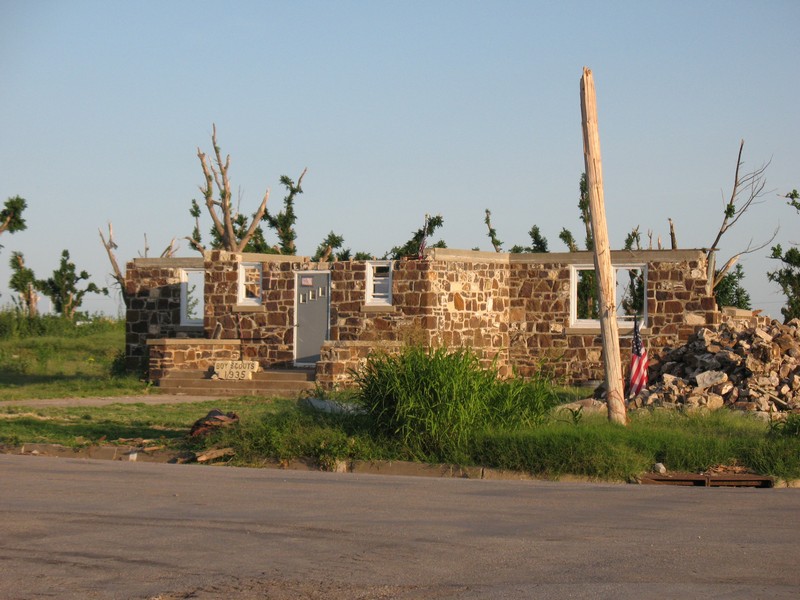 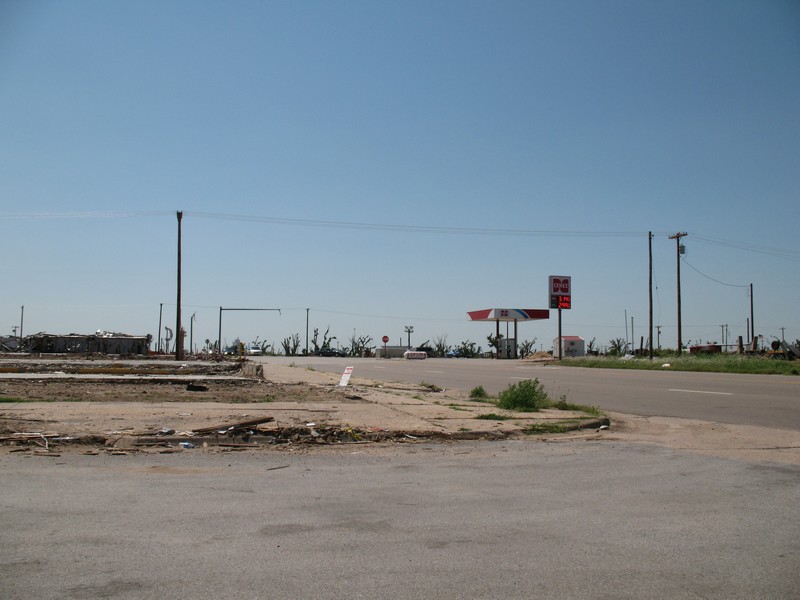 Meanwhile, this Wikipedia photo provides an elevated view, showing the magnitude of the devastation. Outside of the street grid, anything resembling a town—just about everything protruding from the ground—was annihilated. With the exception of the courthouse and a few commercial structures, every building was damaged beyond repair. Many of the town’s 1,500 residents demonstrated their commitment to the region by immediately filing insurance claims for repairing their homes. However, a number of citizens recognized that the community, mired in a continued population decline, could not retain its young population, and that it should seize upon this disaster as an opportunity for reinvention. With the help of a design firm from Kansas City, Greensburg’s leaders devised a proposal for making the city as environmentally sustainable. The comprehensive plan, detailed through the site of the respective nonprofit Greensburg Green Town, culminated in the council’s resolution to make all new construction certified LEED Platinum, which is the highest standard of environmentally sustainable building technology as measured by the US Green Building Council.

Whether it involves a John Deere factory powered by wind turbines, or a courthouse that harvests and recycles rainwater, the goal that Greensburg’s leadership intends to achieve is to become the nation’s first fully ecologically sustainable town—an ambition that has earned the community attention in a Discovery Channel documentary and countless private and non-profit supporters who may have otherwise overlooked the community’s plight. A conversation with Mayor Bob Dixson revealed to me that while not every Greensburg inhabitant clearly bought on to the idea, a significant number in this conservative agrarian community realized that many green lifestyle choices are in themselves fundamentally conservative: frugality with natural resources; saving to purchase higher quality products that will have a greater longevity; encouraging self-sufficiency by working with materials close at hand. These are practices within the green movement that the citizens of Greensburg widely embraced long before the storm. And thus Greensburg has prepared itself to re-emerge stronger, more attractive to investors, and greener than it was before.

Clearly the Greensburg story captures one particularly remarkable—and extreme—example of the proliferating visibility of the green movement. And LEED (Leadership in Energy and Environmental Design) as a standard for judging green buildings is undeniably fashionable at the moment. But it doesn’t take much effort to find humbler examples that suggest that going green is to An Inconvenient Truth what Facebook is to MySpace: kindred outlets that have expanded the clientele in support of the original idea. You can guess which one of each pair has proven its resiliency by skirting controversy. The new wave of penury which Americans have confronted in this Great Recession only helps to reinforce the notion that mainstream ecological sensitivity is here for the foreseeable future.

Of course it behooves the private sector to follow this trend—like most fads, it easily equates to a new source of revenue. For the public sector, it can equal more than simple cost savings: it could translate to a growing voter base. But what about when a non-profit or faith-based institution jumps on board? 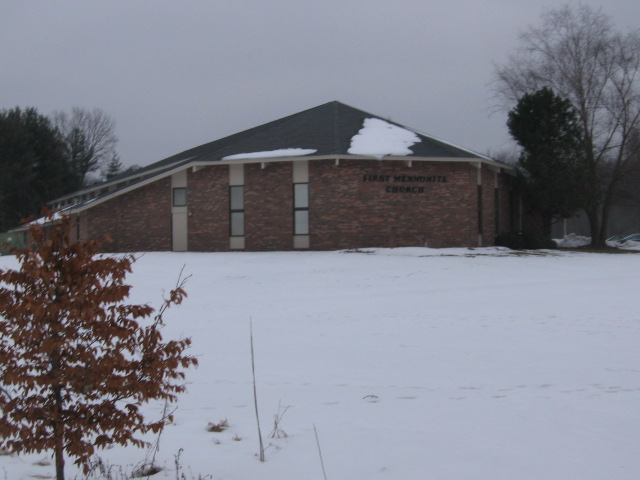 The First Mennonite Church on the near-north side of Indianapolis has engaged in several initiatives that have dramatically altered the congregation’s stewardship of its large property, as well as its physical appearance. The ten-acre parcel rests in the almost exclusively residential Crooked Creek neighborhood, generally suburban in appearance and character, yet conveniently only about four miles from the city’s downtown, as seen in the Google map below:

For decades, the church has endured the cost of maintaining its grounds through five hours a week of mowing labor, only to see the turf grass sit unused the vast majority of the time. In the summer, the lawn routinely floods, no doubt exacerbated by the impervious parking lot and rooflines nearby, as well as the fact that the Miami silt loam likely has hydric soil inclusions—in short, part of it was probably originally a wetland. A few years ago, the congregation at First Mennonite determined that the church’s grounds were offering little community or ecological benefit, while unnecessarily depleting maintenance and operation funds. With the help of a grant from the Indianapolis Center for Congregations, FMC teamed with local architecture firm Browning Day Mullins Dierdorf Inc to develop a multi-phase master landscape plan and site design, currently underway. The project began in the spring of 2008, with the planting of a combination of trees and shrubs which will serve as a riparian buffer to protect a proposed bioswale leading from the existing detention pond in the front of the property (near Knollton Road to the west) to the larger, planned retention pond for wetland mitigation purposes in the back of the property (to the east).

I offer my deepest regrets that I learned about this remarkable church during such inclement weather; most of my photos shroud the impressive work under a thick layer of snow. But you can still make out the young plantings in the photo below: 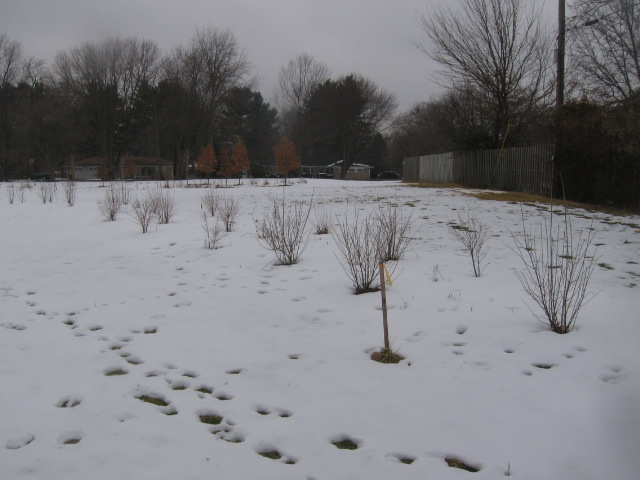 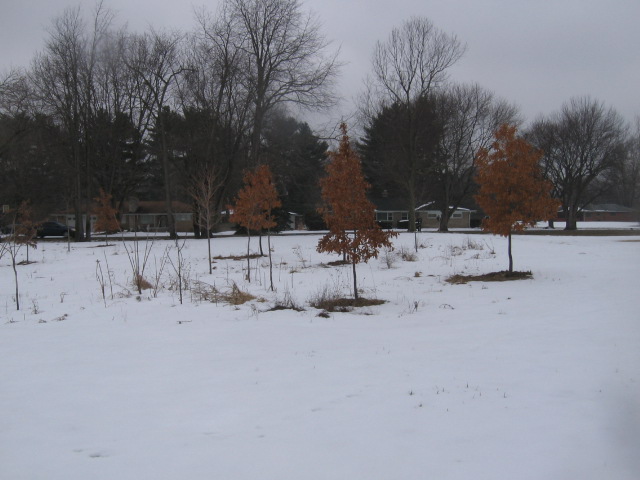 And the unlandscaped portion to the left of this photo below is the evident retention pond at the front of the property. 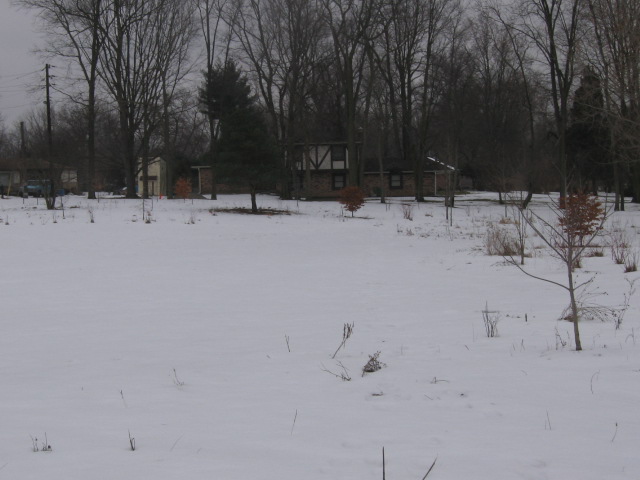 Below is the obvious eventual trajectory of the bioswale connecting the two ponds: 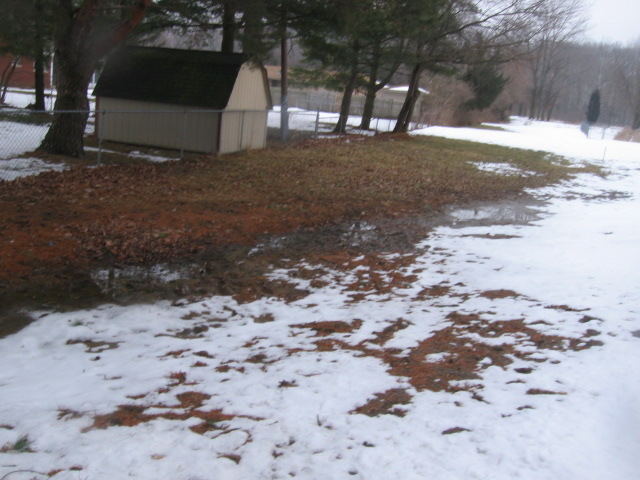 Later in 2008, the church planted a variety of prairie grasses and wildflowers on the 3 or 4 acres between the retention pond and forested wetland on the east end of the property and the bioswale and detention pond on the west end. 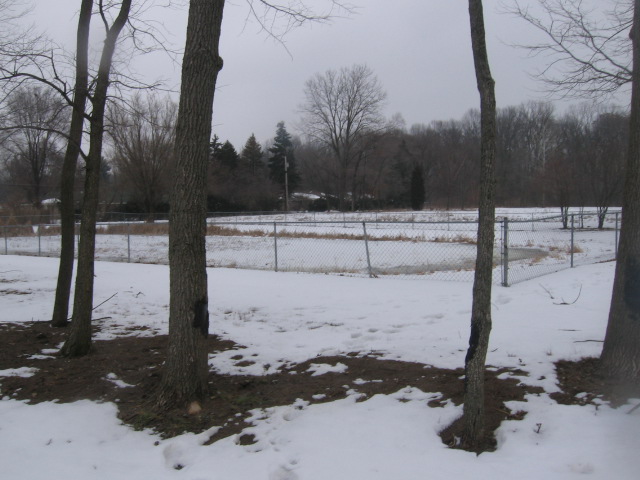 The untamed forest at the far eastern edge of the property can be seen in the photo below. 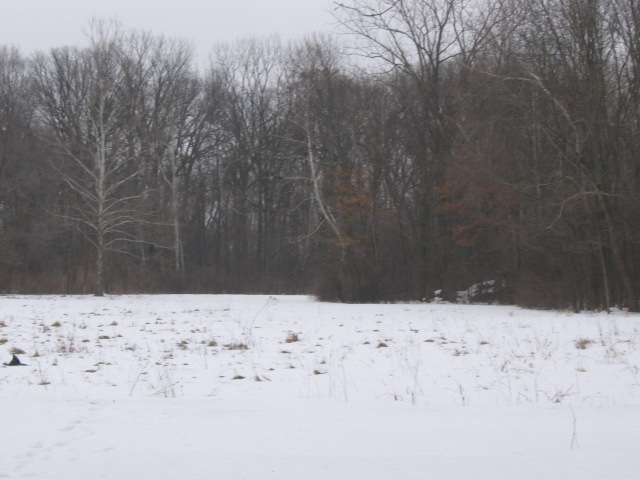 I hope to revisit the site in the summer, when the landscaping will be much more plainly visible, and the long-term plan undoubtedly will show further progress.

Meanwhile, the aerial photo below best illustrates the final stormwater management goal, with two large ponds connected by a bioswale, which carries the overflow through a dry planted ditch. The young trees and shrubs thus provide the riparian buffer.

Future landscape design goals include a pervious, crushed gravel walking path (already partially in place in the front of the property), a shelter house, a memory garden, and community vegetable garden plots. Ideally, the entire site will serve as a demonstration project to encourage other communities to follow this example of the incipient green movement.

The First Mennonite Church articulated its goals through these improvements: 1) enhance the overall church mission through increased use of the grounds and by encouraging community participation in healthy activities; 2) limit the ecological footprint of the church by improving the natural habitat and reducing on-site consumption of energy; 3) minimizing maintenance by eliminating the need to mow much of the property and reducing likelihood of vandalism or littering by fostering a park-like setting of collective stewardship. Certain elements of these objectives may clash with other faith-based organizations, who find their religious teachings do not harmonize with green politics or the open invitation of the surrounding community to use their property for recreation. However, few churches would object to a new method of saving money.

Whether mowing the lawn regularly or unnecessarily watering the turf in the summertime (which of course necessitates more frequent mowing of the lawn), groundskeeping can prove inordinately expensive for an organization that relies upon donations to sustain its operations. The First Mennonite Church has embraced the idea that a manicured property is not necessarily more aesthetic, it certainly isn’t as ecologically sensitive, and all too often it costs more. The return on investment for an aggressively maintained lawn is always difficult to assess but may equate to whatever recreational opportunities it affords. This Mennonite Church in Indianapolis is gambling on the idea that an unspoiled wetland/forest may offer more to the congregation and neighboring community than mere grassy playing fields. Based on the numerous scattered examples across the country, their gamble may prove right. Going green is hardly a revolution (and how many revolutions have ever successfully met their initial goals?)—it’s the accrual of modest gestures over time that, with patience, offers a true impact. Conservation is the component of the green movement that is the quietest but also the most “sustainable” (another emerging buzzword). But why should it fall purely under the domain of liberal politics when the root of the word is “to conserve”? Like the citizens of Greensburg, the First Mennonite Church of Indianapolis is investing more now with the understanding that it will save money and offer quantifiable benefit in the long-term; it is a message that transcends political parties in this time of prolonged economic strain.

PrevRethinking the Behemoth, Preserving the Banal, Part III: Mundane microbuildings have a place in contemporary urban life.
Baba ghanoush in a ketchup dispenser.Next