Baba ghanoush in a ketchup dispenser.

It is nearly impossible to engage in any extensive study on the built environment without exploring how widespread cultural practices or beliefs have shaped the visible results. The simplest and purest goal of this blog—to look at the world around us and ask “What does it mean?”—would crumble if I avoided any exploration of that versatile, vague term. But I’ve treaded lightly around “culture” as a direct label because its denotative inclusiveness is so subjective, and as of yet I’ve outwardly avoided including race or ethnicity into the mix; ethnicity is just too thick of a stew to provide a reasonable “taste” in a 1000-word essay. Even demographers for the US census have proven unable to categorize race or ethnicity decisively: over the past forty years, a new racial/ethnic category has entered the survey with each passing decade. (It’s seems hard to imagine now that the only two major racial categories employed in the US Census of 1970 were “White” and “Negro”.)

For my first blog post on culture as it pertains to race and ethnicity, I’ll address the topic gently. As is frequently the case, this narrative deserves to begin in the most unassuming setting: a roadside gas station in Baton Rouge. 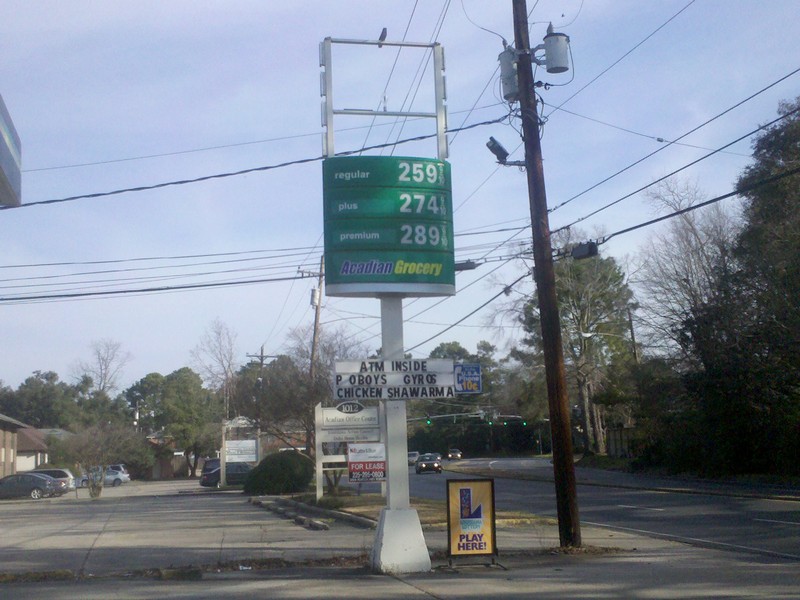 But check the marquee underneath the price listings. The food options include the po-boy, the traditional Louisiana submarine sandwich on French bread—a standard of any sandwich vendor in this part of the country. The next option is a gyro, which is more surprising but hardly obscure these days; the Greek dish, usually served in the US as a pita sandwich, is widely available in mall food courts or downtown lunch carts throughout the country. The third option, chicken shawarma, is completely unexpected. Although a common menu item in fast-food Mediterranean restaurants as well, it usually warrants an accompanying explanation or picture. Vendors cannot assume that the broad customer base will know what it is, even though the shawarma preparation strongly resembles the gyro, particularly if lamb or beef replaces the chicken. But this ordinary gas station promotes it though the roadside signage, as though it might be a huge selling point. 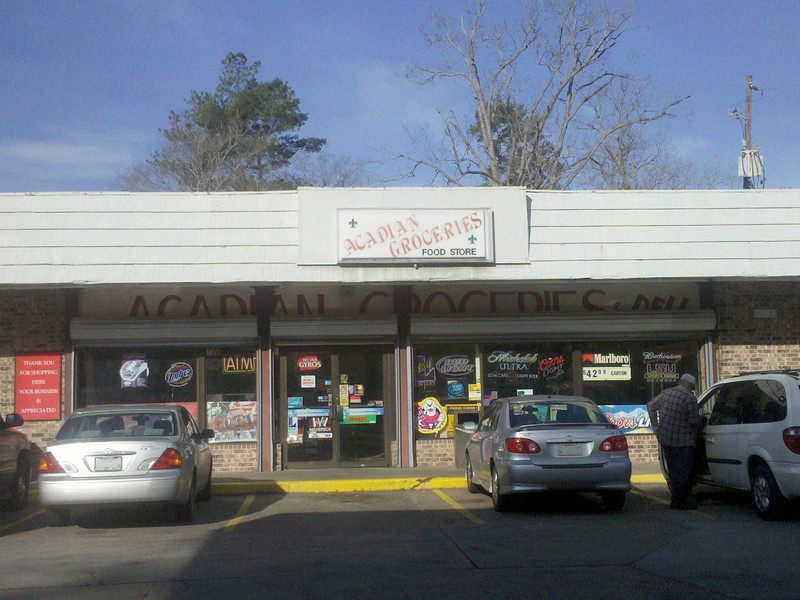 Maybe it is. Virtually nothing else about the gas station will strike the visitor as remarkable. 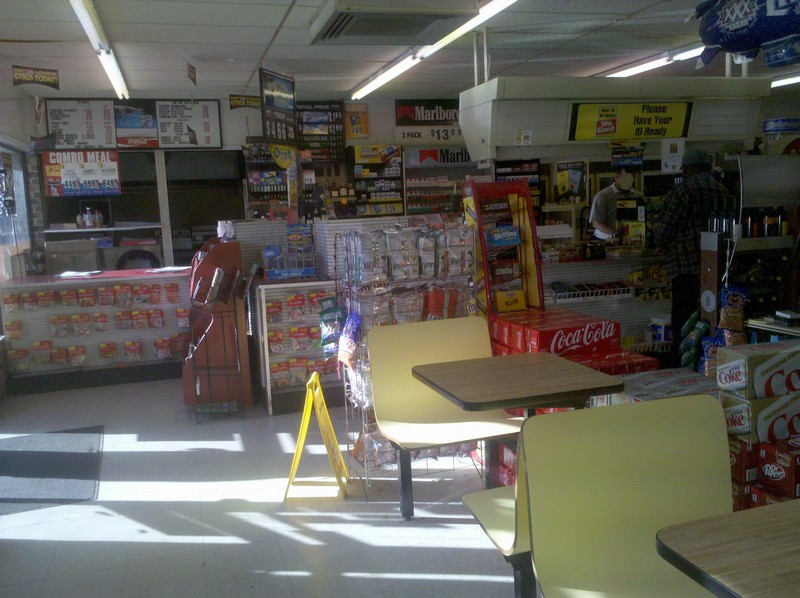 It isn’t saturated with bold wall colors, vaulted ceilings, or broad, spacious aisles, the way most new gas station chains are. This station could be anywhere. The only thing that distinguishes it at this point is the menu.  And really just the shawarma. 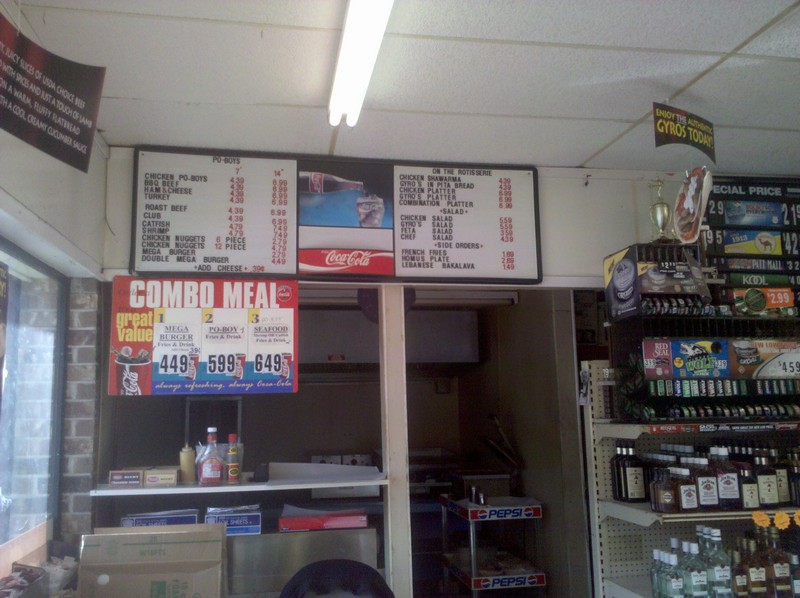 The roadside marquee should have offered more than sufficient evidence, but the interior menu reinforces it: the restaurant portion of this store is a pastiche of conventional gas station concessions, local culinary preferences, and the cultural heritage of the store’s proprietor.

By now it is largely visible (and often casually discussed) how certain ethnic groups often find entrepreneurial niches in the US in which they singularly thrive: Poles/Russians in plumbing, Irish in law enforcement, Koreans in dry cleaners, Vietnamese in nail salons, Ethiopians in taxicab fleets. And a recent USA Today article quotes the Asian American Hotel Owners Association, which estimates that persons of Indian descent own 43% of hotels and motels in the country. And gas stations? Visibly dominated by Arab-Americans, as the additional food offerings of this establishment in Baton Rouge suggest.

But compare this to the other visible ethnic occupational niches. Rarely do they overtly integrate their cultural heritage into the goods or services they provide. Nail salons don’t usually reveal a particularly Vietnamese flair, Ethiopian taxicabs would not likely play indigenous music, and most Indian-owned hotels in the US try to blend in with every other. (The exception is the rare roadside hotel with an attached Indian restaurant, though that inclusion most likely intends to attract traveling truckers of Punjabi Sikh descent, another growing ethnic occupational niche.) Thus, the proprietor of Acadian Groceries is taking a bit of a gamble, incorporating an unfamiliar food such as chicken shawarma into the gas station menu. If he were anticipating a large consumer base that shared his ethnic background, this might make sense. But none of my research indicates that Baton Rouge has a particularly large Arab-descended community (though the conspicuousness of Lebanese restaurants does suggest that the Lebanese population is certainly higher than the national norm). Perhaps the proprietor of Acadian Groceries is hoping that chicken shawarma will catch on to the same degree of its widely familiar cousin the gyro. It is probably not difficult at all for him to prepare, and he may get a discount on the ingredients from some of the local Lebanese/Middle Eastern restaurateurs. At any rate, this is the most overt gesture revealing the national origin of a gas station proprietor that I have seen. In an era of escalated suspicion of Arab Americans, the owner of this store has essentially announced his Middle Eastern background—to those attuned to the cuisine—on his largest sign.

Will people buy the shawarma? He may never have analyzed this to such a degree (clearly I’m the one with the knack for over-analyzing), but I think it’s a smart gesture. How did other formerly ethnic foods—the burrito, the pizza, the gyro—achieve American ubiquity? Certainly not through a catered event for high-powered New York socialites or Washington bureaucrats in an elite hotel. The best way for a heretofore foreign meme to proliferate, and thereby to dilute its foreign-ness, is through banal exchanges: kielbasa at a food cart in the city park; strip mall Chinese restaurants in any town over 1,000 people; some new deep-fat fried concoction sitting under the heat lamp at a gas station. One may argue that, if a cultural item has “trickled down” to that level, it must already be omnipresent. But foreign-born business owners have often found fewer barriers to entry in smaller communities, where cost is less prohibitive. Movies such as Mississippi Masala (1991) reveal the widely established foothold Indian hoteliers have long established in the Deep South. And the Louisiana po-boy owes much of its origin to the dissemination of affordable shrimp and oyster sandwiches among the working classes.

These Middle Eastern menu offerings effectively distinguish Acadian Groceries from its dozens of cousins across the Baton Rouge metro, even if only to a few discerning customers each day. A single new sandwich is often all it takes, and it certainly proves cheaper than an elaborately decorated interior. I know this a bold assertion on my part, but this unremarkable entrepreneurial gesture may foreshadow a more sweeping cultural change, in which gas stations and convenience stores become so wedded to the Arab American identity that it’s like getting a hot dog at a baseball game. Fortunately for the owner of Acadian Groceries, mudbug-devouring Louisianans have a propensity for trying foods that much of the rest of the country might shun at first. Chicken shawarma certainly isn’t more audacious than, say, alligator cheesecake.  And all the better if this proprietor can enrich the cultural palette of that enduring symbol of mundane Americana: the roadside gas station.

2 thoughts on “Baba ghanoush in a ketchup dispenser.”