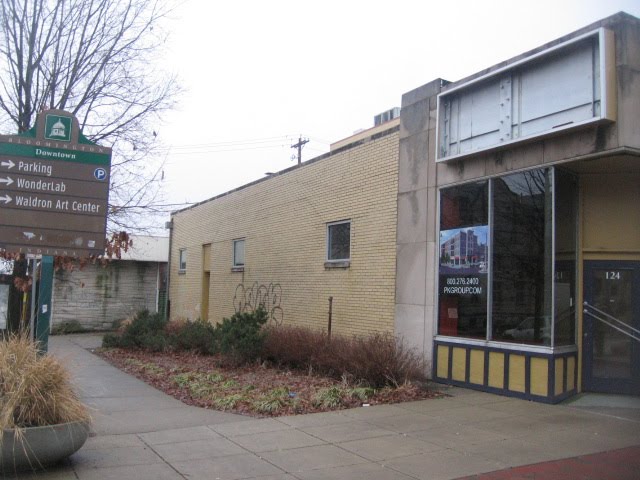 Despite the fact that I always include images in my blog posts, more than a few have been on the wordy side. So I am going to try to include at least one post each month that is dominated by images, with just enough accompanying text to provide some background. I’ve already done this once with the rural enclave series at the end of December (and apparently just about crashed a few servers due to the plethora of photos), so this one will be a bit more focused.

Whenever one sees a series of adjacent vacant properties in an otherwise economically healthy area, it’s usually safe to speculate that something is afoot. If the properties are contiguous, that “something” is likely to be bigger than the individual component parts. The process of land banking can involve enough different appropriative gestures that its slightly varying interpretations have become almost fungible. Usually, though, it involves the purchase of raw land in the direct path of suburban growth, long before the suburbanization reaches that property. If purchased early enough, the land should be cheap (and therefore property taxes are low). The owner/land banker sits on the property until settlement patterns move further in that direction, demand for the land rises precipitously, and the owners sell for significantly higher than they paid.

But what if the property is already developed and the urban growth has already arrived? If it involves a series of adjacent properties, it’s more likely to be considered parcel assembly but the landowners are often dancing the same tango rhythm with the market as they would be if they were land banking. They are buying, holding, and waiting for something bigger to happen. And when it involves parcel assembly, it doesn’t always take place in suburbia.

Witness, for example, what’s taking place in Bloomington on Kirkwood Avenue, one of the primary commercial main streets of the city, linking the Monroe County Courthouse with the primary entrance to Indiana University. A few months ago I encountered a vacant, somewhat dilapidated looking half-block along Kirkwood, which took me by surprise. 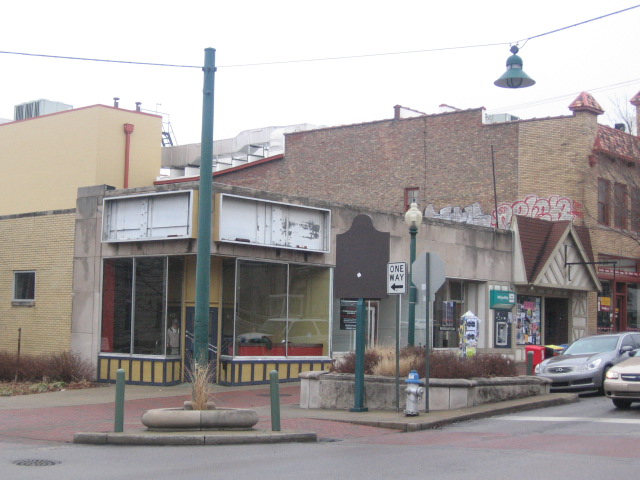 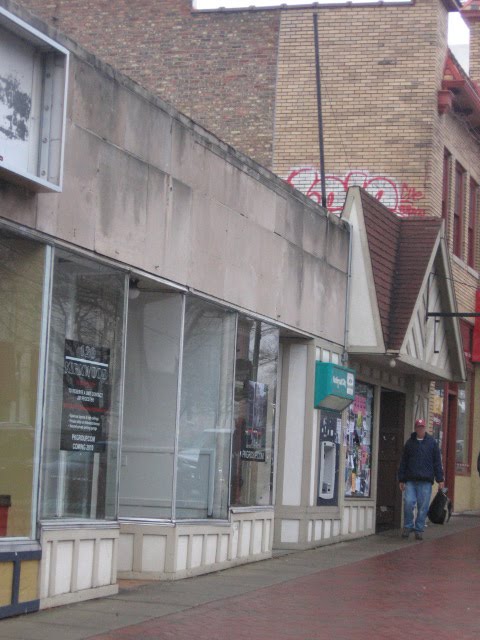 This area is frequented by student pedestrians, and it has never had a problem attracting good tenants to fill the storefronts. Either the property manager is charging outlandish rates or he/she has other plans. 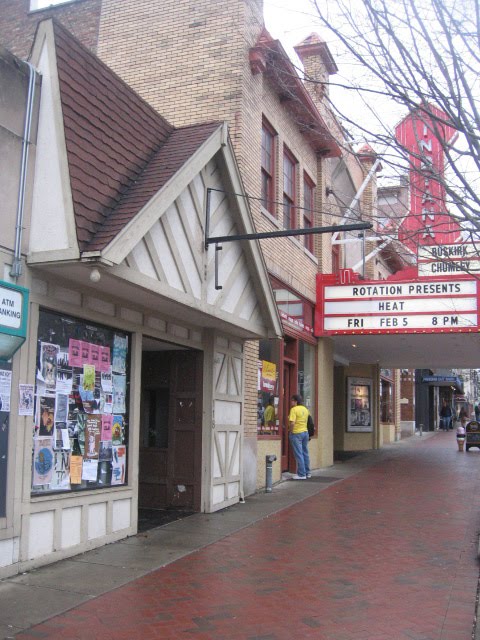 Returning more recently, I was not surprised to find this announcement. 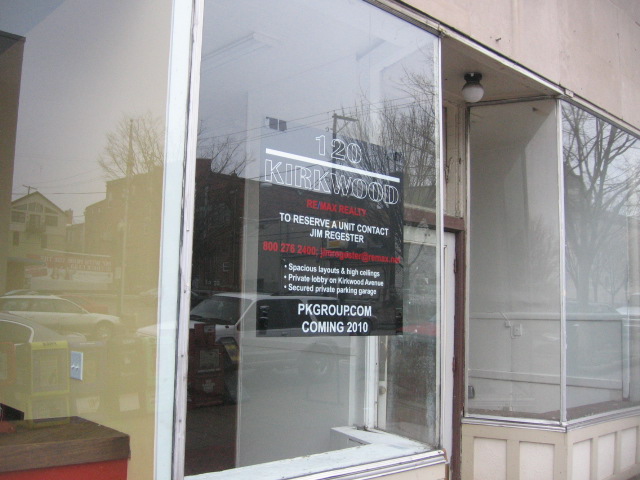 I could be wrong, but I think this is a manifestation of the fact that Bloomington has caught a bit of the Hot Big Ten syndrome. The high repute of the academics at Indiana University and their comparatively low cost have attracted an increasingly large number of East Coast students in recent years, many of them coming from the country’s most expensive prep schools. Like Wisconsin in Madison and Michigan in Ann Arbor before it, the culture of this verdant college town is increasingly taking on a coastal flavor, enough to draw the attention of the Wall Street Journal not so long ago.

Just as IU’s formidable academic offerings belie its relatively modest tuition, the city of Bloomington has long claimed a level of affordability uncharacteristic of a town with an inordinately high concentration of cultural offerings. But that may soon change. The Tri-State (New York/New Jersey/Connecticut) contingent, previously concentrated in a few dorms and apartment buildings, has expanded tremendously in recent years, bringing its hefty spending power along with it. The result–Hot Big Ten Syndrome–is poking its head all along Kirkwood Avenue. 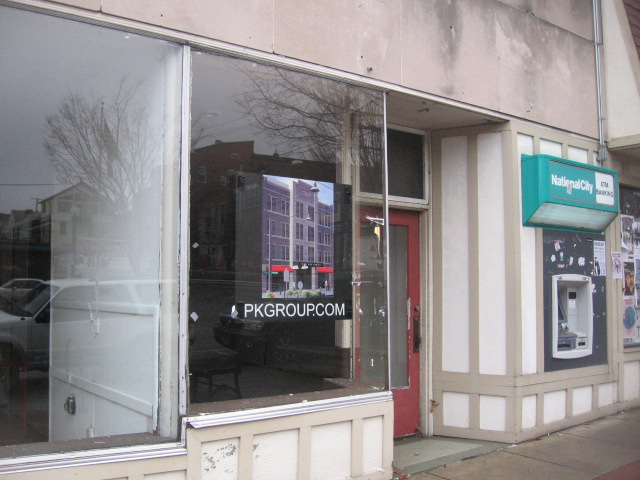 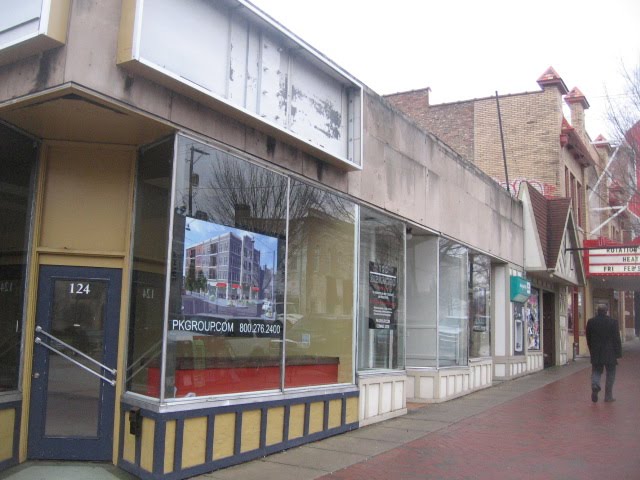 The folks at Bloomington’s Planning Department are caving into to the growing demand for high-end (perhaps even luxury) condos to house its increasingly moneyed student demographic. And who can blame them? No matter how old the structures, it will be hard to argue for their architectural integrity when they don’t come close to being the highest and best use of the land. The replacement four-story condo building with street-level retail still falls just shy of most people’s perceptions of compromising the character of Kirkwood. Undoubtedly some have tried to pose a not-in-my-back-yard argument here, but economic development expediency will most likely take the upper hand: the façade still adapts vaguely to that old-timey Italianate commercial building appearance common in Midwestern cities, it meets a growing demand for prestige housing, and it boosts the city’s tax base. Expect to see more of this in Bloomington as the economy improves; in fact, another appeared to be breaking ground a little over a block away.

I have no idea how long those parcels in Bloomington have sat vacant, but the developer no doubt acquired them piecemeal in the hope of a bonanza which most likely will eventually deliver. It’s fairly obvious this was happening in an urban setting. Auto-oriented suburbia, however, is a bit more subtle. 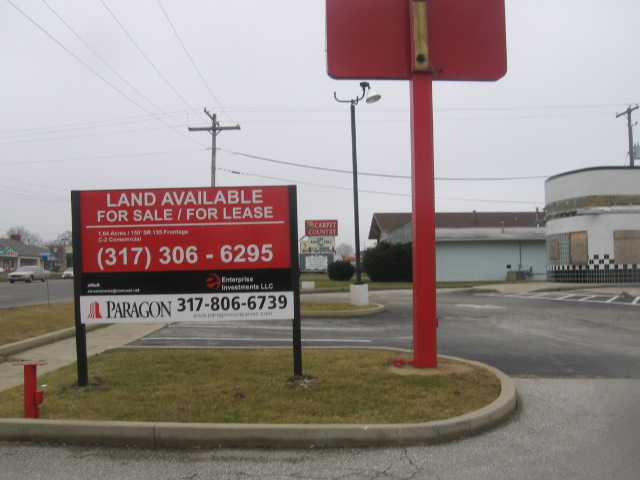 In order to minimize the text, I’ll provide just enough background to accompany the images. The following photo series rests along State Road 135 in Johnson County, just south of Indianapolis. Specifically, it’s west of Greenwood in White River Township, an area often referred by locals as “Center Grove” for no explainable reason beyond that is the name of the high school. And the high school dominates the culture of the area—its stellar ranking has transformed this suburban area into a hot spot within metro Indianapolis. So why would you get something like the photos below on one of the primary arterials in the area? 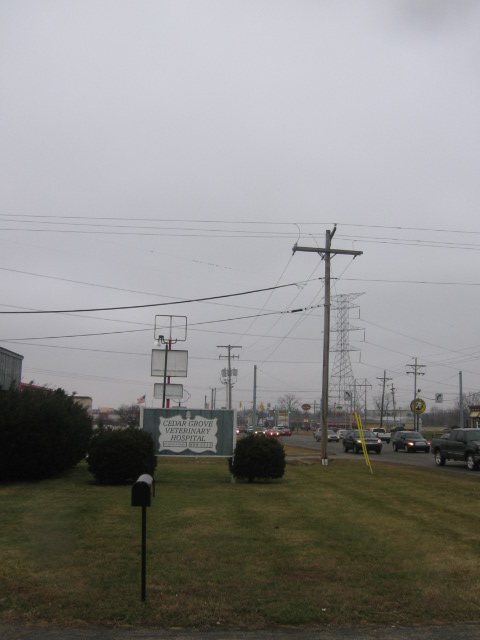 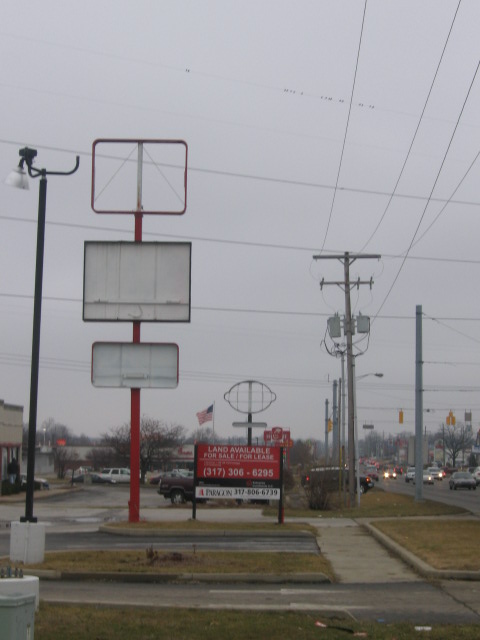 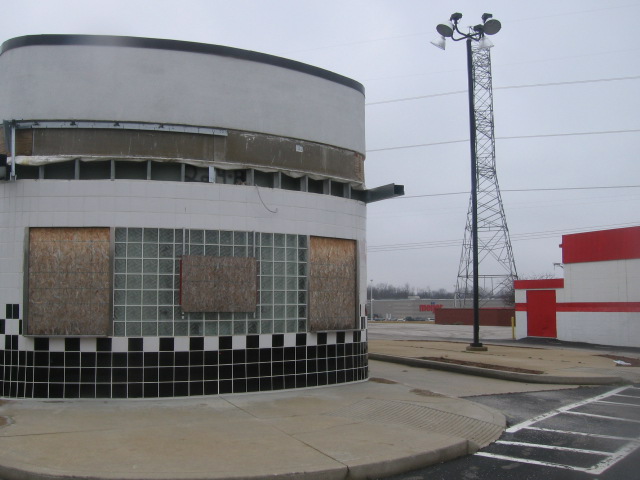 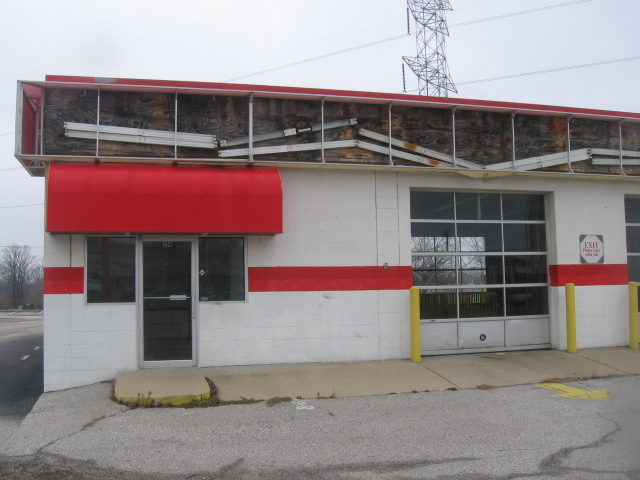 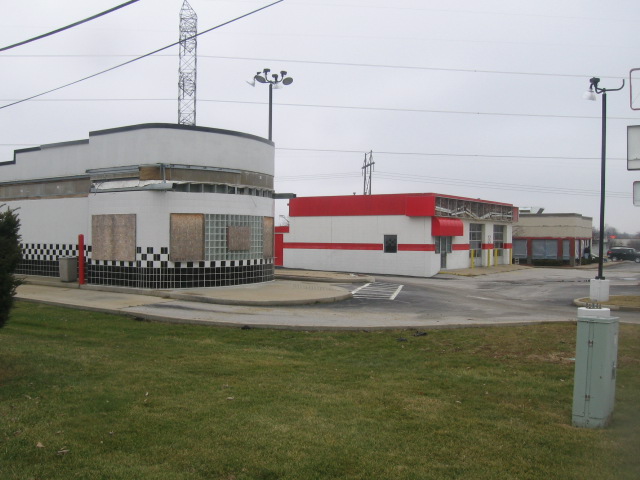 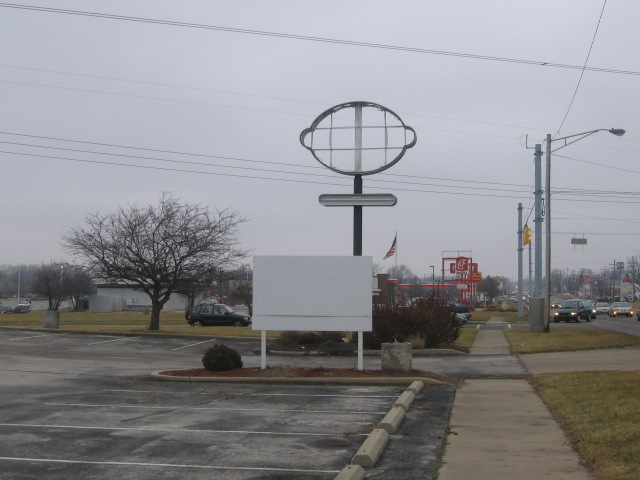 A huge stretch of blight all in a row. And yet, behind it all, a seemingly very successful Meijer, the Midwest’s slightly more upmarket answer to Wal-Mart. 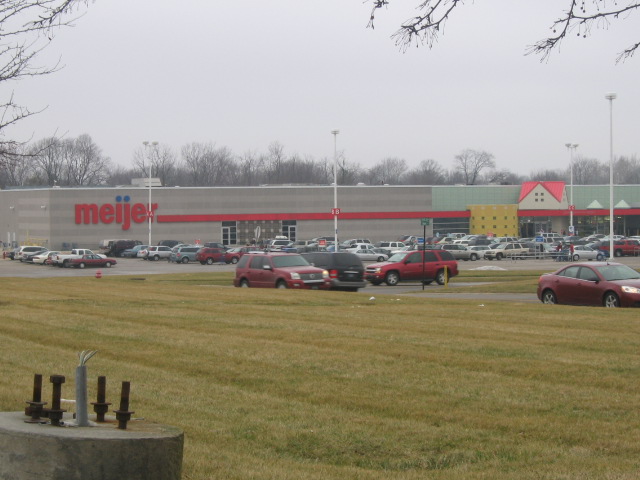 See it poking between two of the eyesores; I’ve circled it in purple. 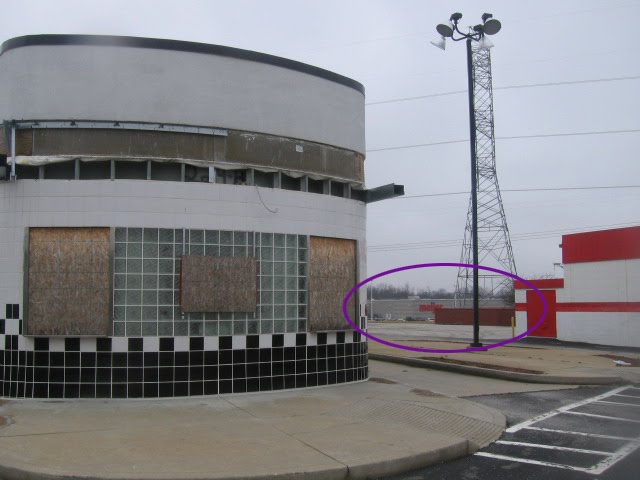 And what lies just beyond that right-of-way that provides an entrance to Meijer? 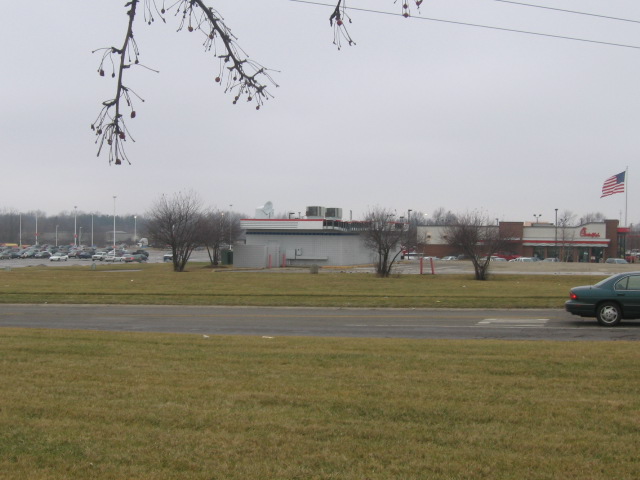 Could this offer a huge development opportunity? Maybe—the development patterns around here are perfect for more of this retroactive land banking. But assembling all the parcels here would be a tough redevelopment because of the car-oriented nature of the area. None of the properties stretch back very far away from the road, so buying all the parcels to build a strip mall wouldn’t be wise; there’s just not enough room out front for all the parking it would require in order to remain viable (or perhaps even to pass the township’s zoning requirements). Are these parcels thus going to remain in development limbo? I’m less sanguine about them than the land banking urban assembly in Bloomington, despite the consistent economic health of the Center Grove area. But it does appear that someone is taking a stab: 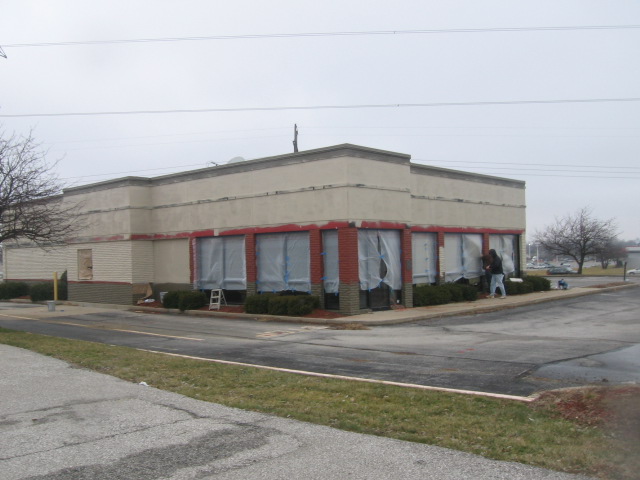 This building used to be a Boston Market but closed at least three years ago; the logo-savvy among us may have recognized the shape of the Boston Market sign in one of the photos from the montage above. It’s next to the vacant Rally’s and Jiffy Lube. In talking to one of the guys working on the building, I learned that this is going to be a pizza place. I wish the owner nothing but the best. He or she still has several adjacent parcels of ugliness to deal with, but with this sort of land banking mentality, maybe he can reawaken the entire strip. There’s certainly no prospect of a fancy condo breaking ground.

PrevWhy the Greenwood Park Mall gets it right, Part II: design prescience.
Storefront diagnosis? Down but not out.Next