In the Part I of this post, I looked at a troubling example of the intersection of economic development, site selection, and historic preservation. The Mayor and City Council of Evansville, Indiana, have decided to demolish a block of century-old commercial buildings to make way from a new sports arena, after negotiations for the previous site, a car dealership, fell through. The Mayor announced that the site where the historic buildings stand (or stood) is ultimately better because the arena will now front Evansville’s Main Street, allowing the activity generated from major sporting events to spill onto the neighboring blocks, thereby helping to revive the long-slumping retail activity on this commercial corridor.

He could be right; I hope he is. But the car dealership site was only a block further from Main Street, and in choosing this location the City is sacrificing some of its oldest surviving structures for a single behemoth. Regardless of whether this block of faded two and three-story buildings was architecturally significant, they had the patina that gives a downtown its perceived “character” and could have proven pivotal for a sustainable revitalization of the downtown’s commercial core. Now they are gone. While the arena may nonetheless help bring pedestrian traffic to a part of downtown that has sorely lacked it, the City’s favoritism toward a historic Main Street site instead of a car dealership seems based on two specious assumptions which I previously mentioned: 1) that big-ticket destinations revitalize downtowns because the foot traffic they induce will “spread” to the struggling surrounding area; and 2) that small historic commercial buildings lack merit without some larger attraction upon which they depend, almost parasitically.

Now let’s dissect the first of these two assumptions a bit more. 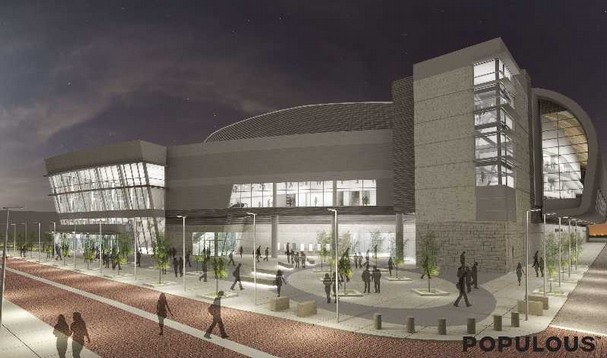 The Indianapolis blogger, Dig-B raised terrific initial observations when the new site for the arena was announced on the Skyscraper City forum. What’s the biggest problem with an arena as a catalyst for downtown revitalization? As Dig-B recognizes, its usage is sporadic at best. Though it is likely to pack in the crowds for Evansville Purple Aces basketball or the Evansville IceMen hockey, it will remain unused most other days, with the exception of the occasional music concert. If the arena is bustling with activity for 120 days each year—and that’s an ambitious number—that still leaves two-thirds of the year where it will have no activity whatsoever. All too often, downtown revitalization strategies seem (often unconsciously) to import the suburban mall typology where the existing old vacant commercial buildings are perceived as the homes for the small in-line tenants, and what is missing is the giant anchor or department store. If that paradigm were valid, then how would an arena equate to a department store, when a Macy’s or Nordstrom has just as long (if not longer) hours in a mall as the in-line tenants? Many of the arena’s biggest attractions occur at nights and on weekends, whereas these small commercial buildings often attract small businesses that operate during a standard M-F 9-5.

Memphis offers a good example of where a giant sports venue has failed to engage the neighborhood that surrounds it—actually two venues. 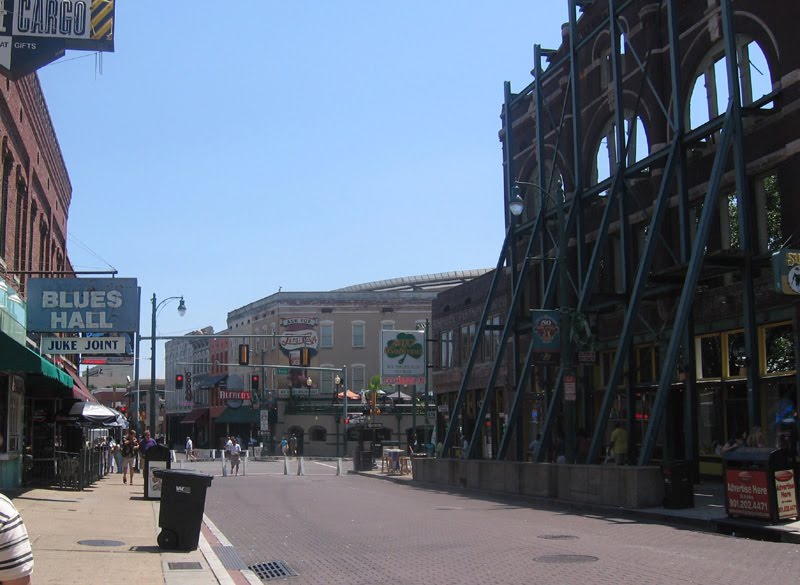 Beale Street—at least four blocks of it—remains mostly intact as a testament to the city’s blues heritage. (I say “mostly” because it is dotted with none-too-subtle infill and facadectomies, including some where just the facade is standing through careful bracework, while the rest of the building opens to a courtyard or parking lot, as the photo above reveals. I blogged about this peculiar approach to façade preservation in the past.) The map below outlines the heart of Beale Street in red; it is one of the few consistently successful pedestrianized commercial corridors in the country, even if only for three blocks. However, the area that surrounds it demonstrates the potential damage incurred on an urban landscape when a City introduces mega-destinations. 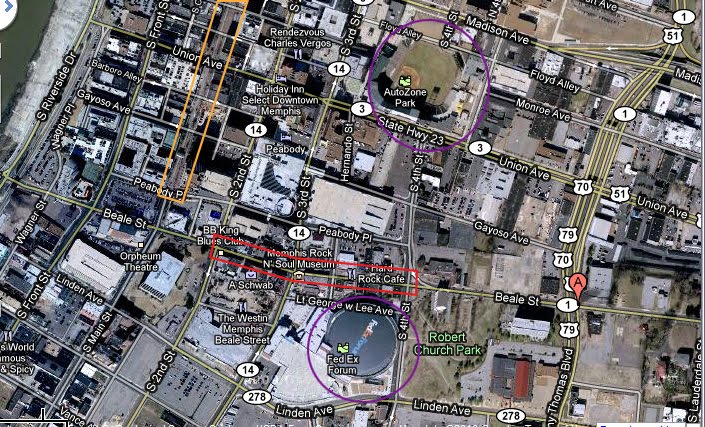 The aerial above makes it clear: all around this nerve center of classic rock ‘n roll are bulky structures—not a home or apartment building to be seen. Within a few blocks on either side sit FedEx Forum and AutoZone Park, circled in purple. No doubt it appeared a wise decision in terms of helping Beale Street to surge with activity after major events, and the street clearly offers a great number of options for a beer and live music after the game. But did the sports venues really need to be located so close to the commercial district?

Beale Street was extraordinarily depressed in the 1970s, despite being declared a National Historic Landmark. Only in the 1980s did entrepreneurial interest take hold and reinvigorate the corridor. Yet the two sports venues listed above were completed in the early 2000s, long after Beale Street had re-established its foothold. My suspicion is that tourists will continue to patronize Beale Street because it boasts a legendary history, and at least some Memphis Grizzlies fans would have trudged over to Beale Street—those who aren’t turned off by the fact that it’s extremely touristy—even if the Grizzlies arena were quite some distance away, because it remains a hub of activity. I’m not sure if the City of Memphis killed a viable neighborhood to the north and south of Beale Street to make room for these stadia, or if the residential community that helped Beale Street to thrive in its blues heyday was eliminated long ago through urban renewal. Regardless, the areas on either side of Beale are pedestrian dead zones today, offering vistas like this one at Fernando Street, looking southward toward Gayoso. 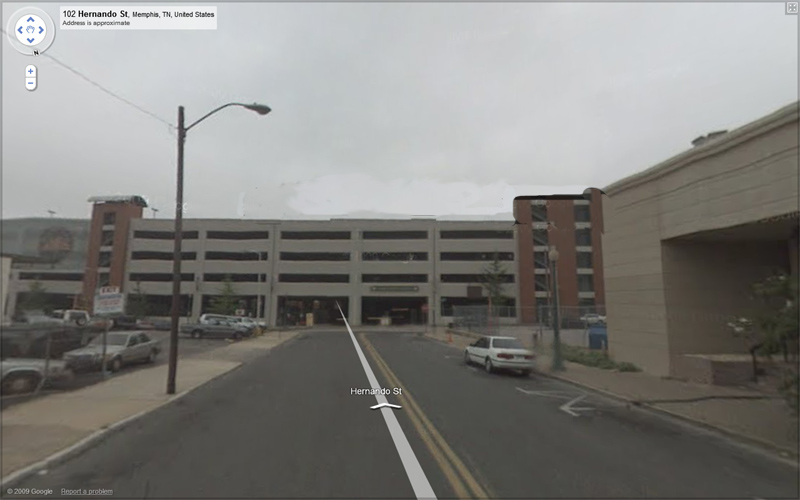 This is what most of the “neighborhood” that birthed Beale Street Blues looks like, sacrificed to make way for enormous structures such as AutoZone Park, FedEx Forum, and the parking garages to serve these two sports pavilions. Could something more compatible have occupied this land, like (wild idea I know) housing? Meanwhile, AutoZone Park also sits just blocks away from the historic Main Street of downtown Memphis (also pedestrianized like Beale Street and Evansville used to be). Main Street Memphis is filled with beautiful commercial buildings that are struggling to find tenants, if this 2007 photo is any evidence. 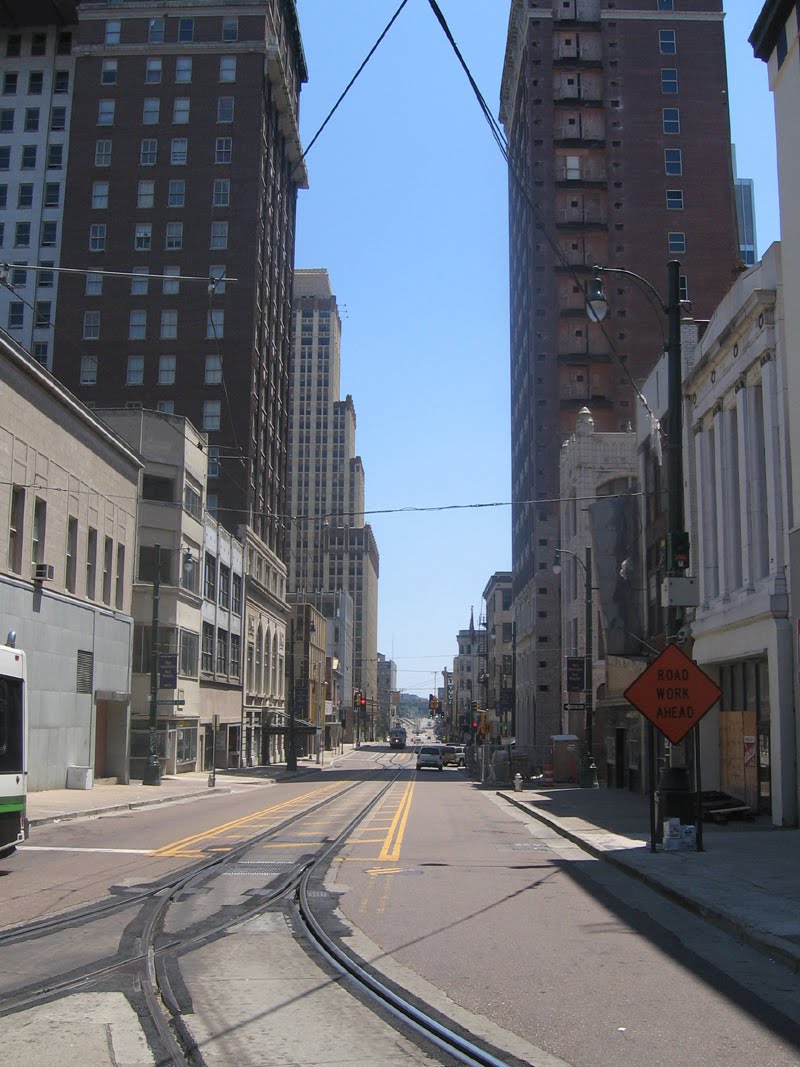 Beale Street, just south of downtown, feels more like a linear theme park foisted into a no-man’s-land—a classic neighborhood corridor in search of its neighborhood.

Compare this to Bourbon Street in New Orleans, perhaps even tawdrier than Beale Street but generally one of the most vibrant Main Streets in America for its surging nightlife—and it’s still open to cars! (At least during the day.) 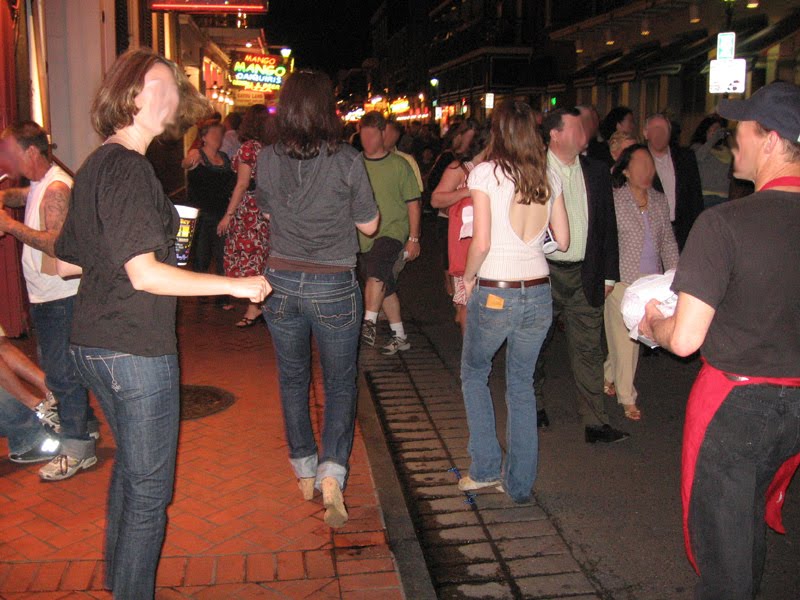 Granted, it’s much longer than Beale Street, or at least that part of Beale Street that hasn’t been ripped apart for urban redevelopment. No major redevelopment has taken place along Bourbon because it serves as the historic commercial artery of the French Quarter, and the neighborhood around it is almost completely intact. See how the street fits in as the spine of the tightly ordered grid that comprises the French Quarter. 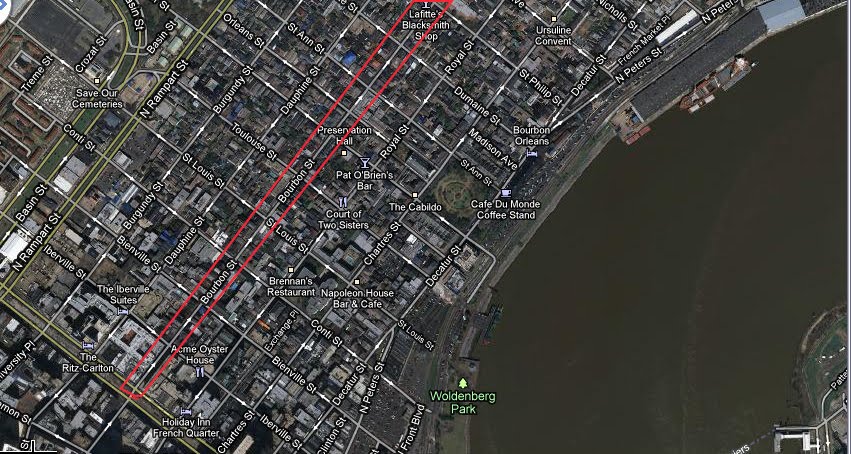 And here are some obliquely angled vistas of the streets surrounding Bourbon, elsewhere in the French Quarter neighborhood. One at Burgundy and Bienville Streets shows a number of tightly grouped residences and commercial buildings within the frame of the picture. 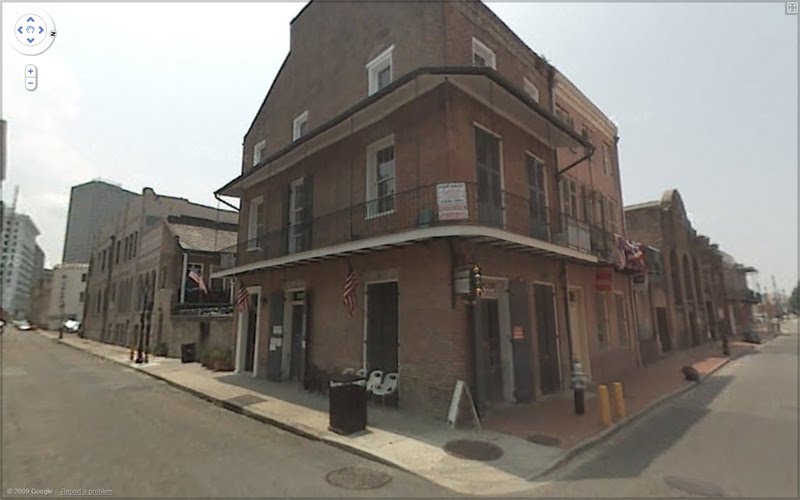 Another at Dauphine and Governor Nichols Streets shows some of the classic double shotguns that comprise a preponderance of the housing in this portion of the Vieux Carre. 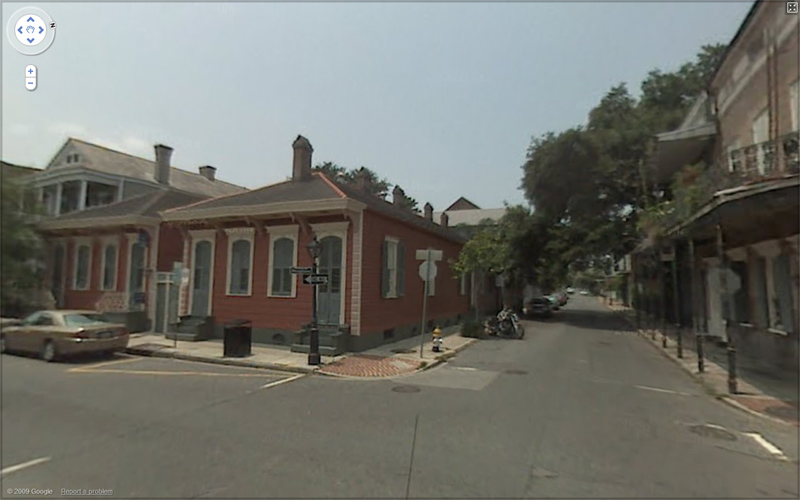 I could muse endlessly about notions of authenticity and how Bourbon feels a bit more “real” (however commercialized and utterly touristy) because it’s still part of a neighborhood, but that is just my own personal taste. The truth is, people go to Bourbon Street regardless of the distance from major event; they’ll walk the 4 blocks from the convention center or the 12 blocks from the Superdome. You can see the distance between the two in the photo below, where the Superdome is circled in purple to the lower left. 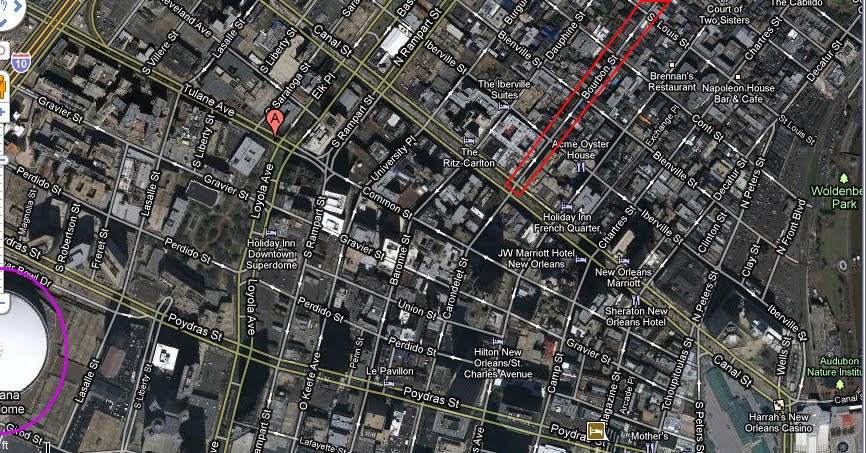 To the west of the Superdome, just outside of the aerial photo’s left edge, are more big blocky buildings and parking lots—another no man’s land. So is this stadium stimulating economic development? The fact that these “forgotten corners” of downtown Memphis and New Orleans sit so close to the arenas suggests that their impact may be minimal. The crowds that surge around the Louisiana Superdome during major events aren’t enough to spur demand for the real estate that surrounds it. Nothing is pedestrian-oriented nearby; there’s no housing, but no one cares. The crowds cluster for tailgating before the game, then they finish the night off at bars or restaurants in another part of town. (Meanwhile, the Big Easy’s minor league ballpark, Zephyr Field, sits way out in Metairie, the heart of suburbia, in a completely unwalkable area.) Perhaps a century ago, the land around the Superdome comprised a viable neighborhood. But prior to the dome’s construction, the area was little more than a cluster of warehouses, already largely bereft of its traditional mix of commercial and residential architecture, after the mass demolition that was required for the construction of the adjacent interstate highway. No historic artifacts were harmed in the making of this stadium.

I don’t mean to denigrate stadia through this post. Both professional and amateur sports have the capacity to foster collective support of a community like few other major events. But I question whether the decision makers behind site selection for sports venues need to be so choosy. An art gallery or coffee shop often depends tremendously on the viability of its location; a stadium does not. (Just look at the less-than-convenient homes of the Green Bay Packers or New England Patriots, far from the population center of their fan base.) The new Evansville arena will attract its crowds, even if they plopped it across the Ohio River in Kentucky. One can only hope the city’s leadership doesn’t have such a cavalier attitude toward the rest of Main Street—however few blocks remain.

I will conclude this lengthy post with a final look at those demolished buildings on Evansville’s Main Street. What makes them so much more critical to downtown revitalization than an arena, even if they lack any true architectural merit? City leaders were right in thinking that the goal should be to attract pedestrians to the downtown, but perhaps they need to apply the worm’s-eye-view to what’s already on that urban stage, rather than investing everything into how it might play out with a new unfinished script.