Rethinking the Behemoth; Preserving the Banal, Part I: Understanding the reasoning behind locating new sports venues.

While I have made risky assertions in the past (and justifiably been raked through the coals for a few of them), this particular post may take the cake. I hoped to solicit family members to take the photos I needed of a cluster of buildings in the city of Evansville, Indiana, but at this point it appears too late. To my knowledge, those buildings have been demolished for a sports venue. Thus, I must rely on press releases and the imagery provided by Google Streetview to develop this assertion. I haven’t been to Evansville for at least fifteen years, so I welcome any chances to disprove the argument I make in the paragraphs below, particularly if my understanding of the space of which I am writing is completely flawed. The spirit of my argument should shine through. 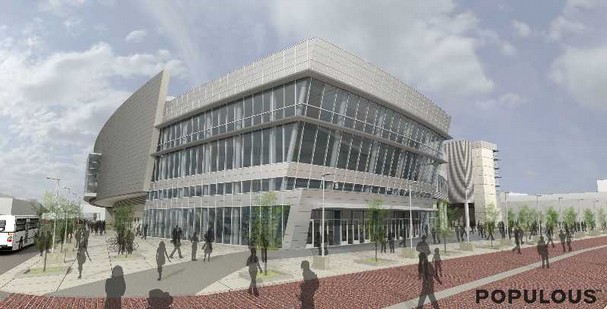 [All arena images courtesy of the architectural firm, Populous, and available at through the Evansville Courier-Press.]

The City of Evansville has long discussed proposals for a new multi-use arena to replace the faded Roberts Stadium on the near east side of town, originally constructed in 1956. In December of 2008, after deliberating quite some time on whether to renovate Roberts or build a new arena downtown, the Council approved a proposal to begin plans for the latter of the two options. Civic leaders immediately began determining the ideal site for a new sports venue and announced a decision that it would rest in the blocks between Main Street and Walnut Street, where they intersect 7th Street/Martin Luther King Blvd directly across from the Civic Center, as indicated by the red box in the map below. 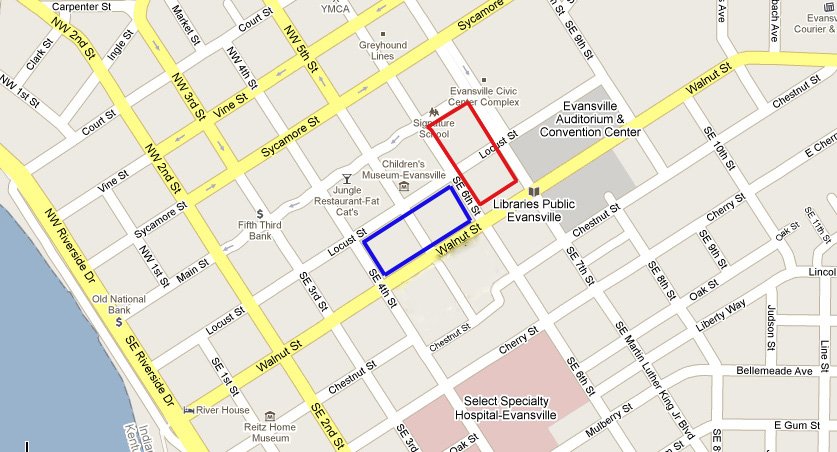 This downtown arena decision merits a quick overview on the development history of Evansville’s center. Like every other city in America, downtown Evansville lost its primacy in the post-war suburbanization period, suffering an exodus of businesses and prominent retail. The city’s most high-profile efforts at revitalization stem from the development of the prominent Casino Aztar on the Ohio River in 1995, the first riverboat casino in the state of Indiana, and the only significant one in the tri-state region (Indiana-Illinois-Kentucky). Its success along the Riverfront Pavilion spawned an Aztar Hotel, an additional boutique hotel, dining, and space for live concerts or major events. Other high-profile downtown features include The Centre, which is a convention center and auditorium, and the recent Children’s Museum of Evansville, inside the historic Central Library. These destinations have helped breathe life into the city’s center, but it has yet to invigorate the historic commercial Main Street, or attract any other trickle-down, privately led development. As in many other cities of its size, Evansville’s leadership decided in the past to transform the artery into a pedestrian zone, installing narrow rights-of-way, benches, lighting, restricted automobile access, and slight curves to the road between each block, a la Nicollet Mall in Minneapolis. It failed to invigorate Main Street and in fact most likely reduced economic activity there. The City reintroduced cars after a few years, while the streetscape amenities have generally remained intact.

Mayor Jonathan Weinzapfel and the Council have indicated their full intention of inserting a new destination into downtown through this sports venue, ideally surpassing the aforementioned Roberts Field in its ability to attract large crowds. Clearly the goal is revitalization of the Main Street, so it behooves the leadership to find a site where the large crowds generated from events at the arena can spill out onto the adjacent streetscape. In that capacity, the location for the new Evansville Arena appears to be a wise decision.

But in downtowns, when something new goes up, in most cases something else must come down, even if it’s just a parking lot. Here’s what the City has decided to demolish to make way for the sports venue, also available for scrolling around through Google Streetview: 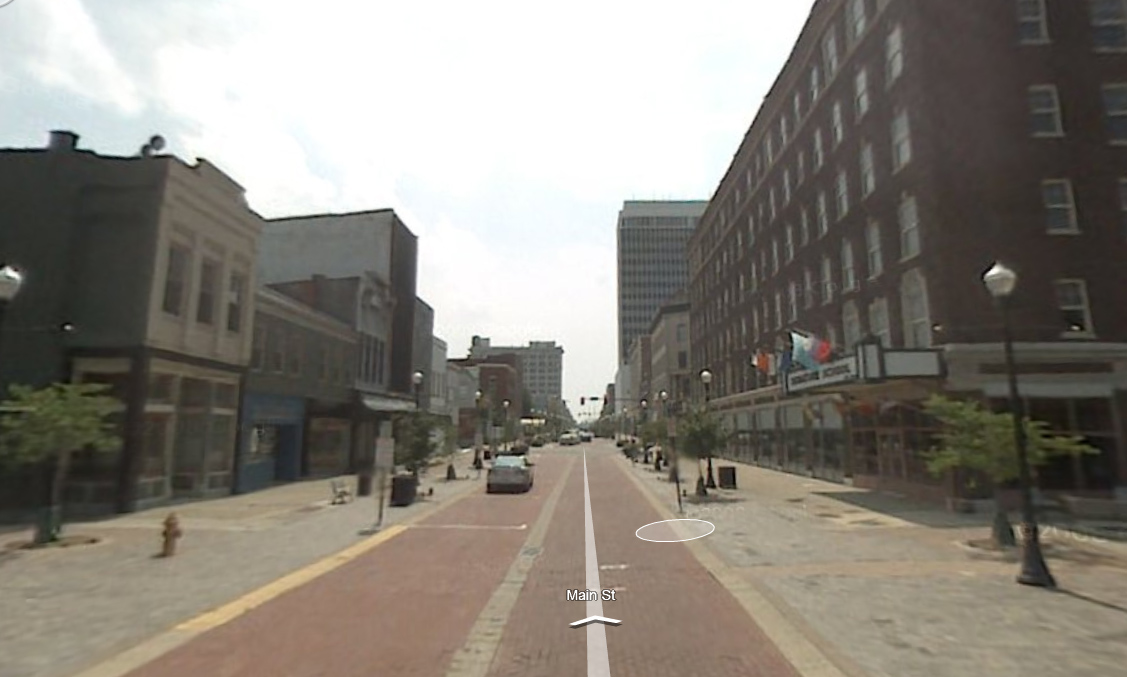 The two- and three-story buildings to the left of the street will face the wrecking ball. In fact, in all likelihood it’s too late, and they already no longer exist. A local company, Architectural Renovators, responded to a bid to extract the most historically significant features from the façades, but the structures themselves are gone.

Lest I seem like a fuddy-duddy who gets sentimental about each and every old building, I will concede a few things. The length of Evansville’s Main Street offers plenty of other historic commercial structures, many of which are in better shape than these; only two of the eight storefronts on this demolished block were occupied; the principal strategy in selecting this site for the arena was to help generate pedestrian traffic that could enliven the blocks of Main Street between the Civic Center and the Riverfront, ideally creating a vibrant commercial corridor between two nodes of activity. City leaders clearly applied some thought to their decision, but did they think it all the way through? This site on Main and Martin Luther King was not even among the original three contenders; the top previous choice was just a few blocks away (indicated by the blue box in the Evansville downtown map above), at the lot of D-Patrick Ford Dealership. Here is a Google vista of the original preferred site: 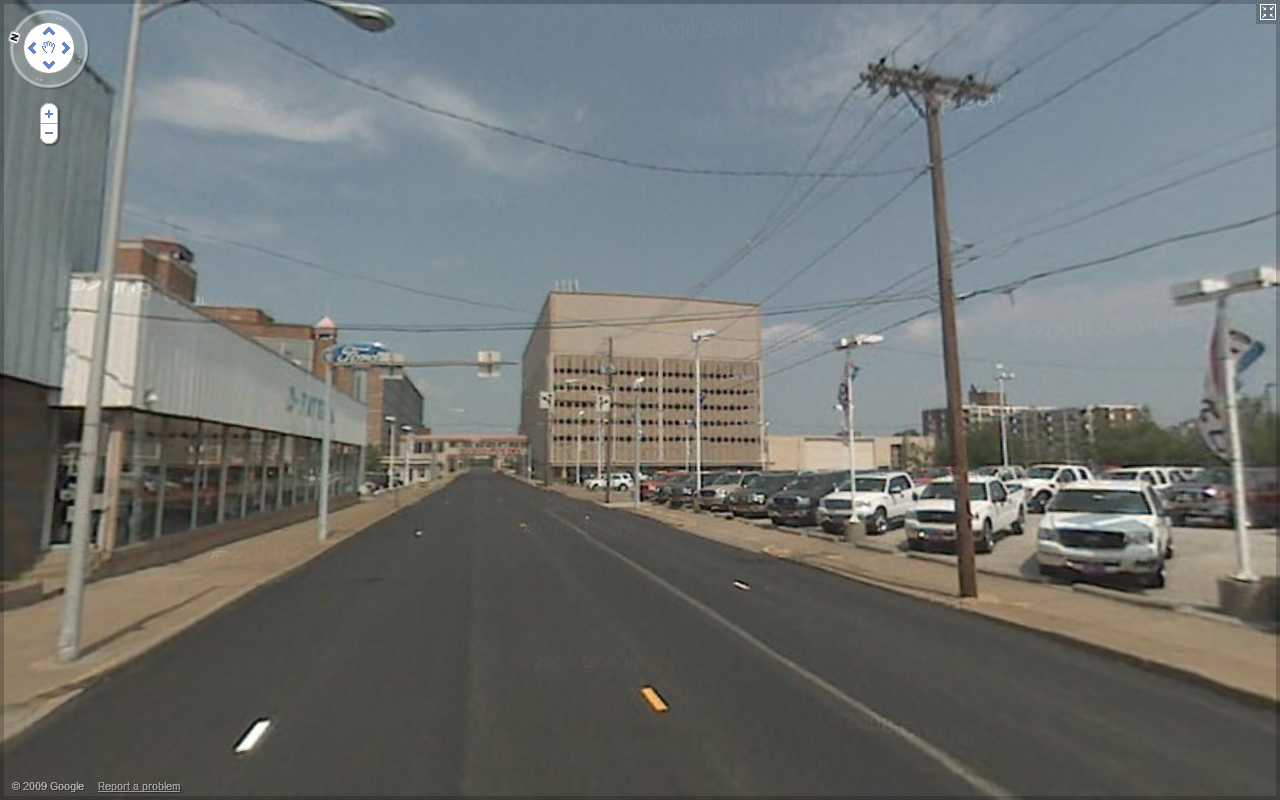 D-Patrick Ford was nixed because the City and D-Patrick couldn’t agree on a price; however, over time, the car dealership’s desirability waned because the site was not immediately adjacent to Main Street. In addition, the owners of the neighboring Executive Inn agreed to participate in the arena proposal that fronts Main Street, so that a major brand such as Marriott or Hilton could demolish part of the aging hotel and improved the other section, resulting in a comprehensive development that would have this configuration: 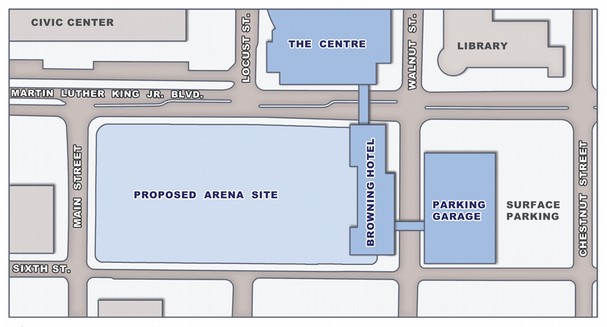 If one attempts to aggregate the values of all assets in the Winning Site (the red box on the map) versus the Losing Site (the blue box), the City’s decision makes sense. The Winning Site, consisting of a series of blighted and largely vacant old commercial buildings, probably costs far less in compensating the landowner than an active auto dealership. But that doesn’t necessarily mean those old buildings are more expendable.

The decision to sacrifice these old buildings for the sake of a new arena in Evansville seems predicated on two false assumptions: 1) that big-ticket destinations revitalize downtowns because the foot traffic they induce will “spread” to the struggling surrounding area; and 2) that small historic commercial buildings cannot find their niche without some larger attraction upon which they depend, almost parasitically. From these assumptions, we witness eight small buildings and part of a hotel demolished for the sake of a new arena, which ideally will stimulate life in the remaining blocks of the Main Street upon which the arena will sit. Those now-extinct buildings most likely sat there for a century. Will the arena that is about to replace them have the same life span?

In the second part of this post, I will delve further into these two assumptions, exploring how they might play out in Evansville from a worm’s-eye view, as well as comparing this approach to sports venue locations in other cities.

12 thoughts on “Rethinking the Behemoth; Preserving the Banal, Part I: Understanding the reasoning behind locating new sports venues.”