If it’s built to last, the conventional middle class American home may be a far more versatile structure than we credit it. As homes age, if their interior layout falls out of fashion, or the neighborhood around them declines economically, all too often they eventually face neglect, abandonment, and, eventually, the bulldozer. What a shame, since much of the time they can adapt to completely different uses far more easily than, say, a strip mall. I’ve written about a home on the Near Southside of Indianapolis that basically became engulfed by a storefront, so that retail fronts the street level, while a steeped roof pokes out from above the rear of the new structure. It’s strangely unobtrusive, since the clear focal point in the commercial conversion is now the protuberant retail that faces the sidewalk and street.

But it’s not alone. Other respondents to that particular blog post recognized similar conversion oddities elsewhere in the city, where the owner essentially built around an old residence with a storefront that conceals much of the original home. And since then I have found additional examples in the outlying areas of the city’s southern suburban reaches. One of the home/storefront hybrids adopts an almost identical character to the one featured in the past, so you don’t have to dig back to my old blog link; just take a look at the photo below and you’ll get the idea. Here’s the façade of what was until recently a barber shop on Madison Avenue: 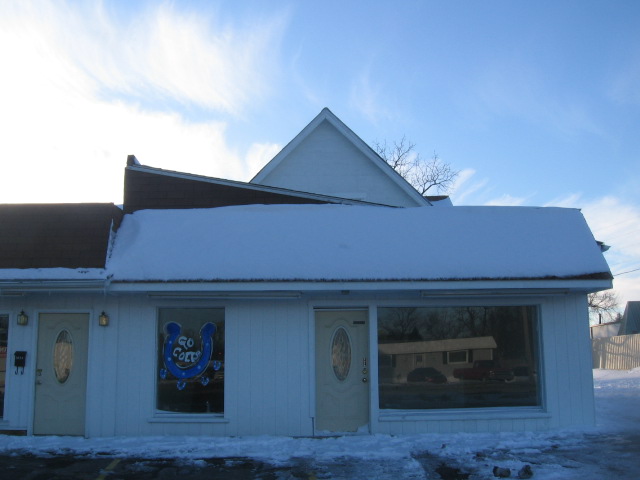 Notice the gable poking out in the back? Here are some side views. 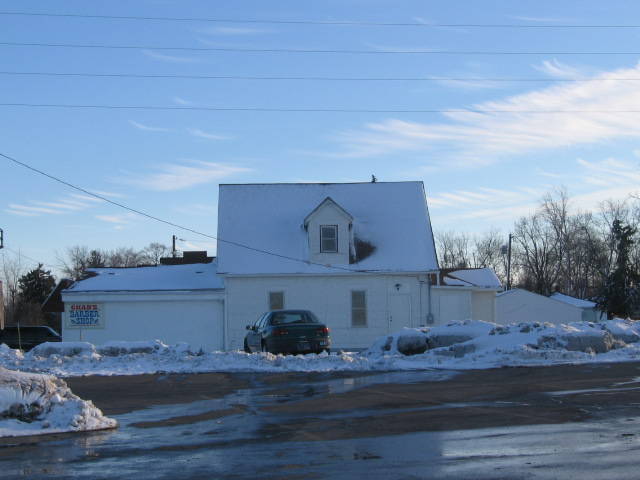 It turns out Chad’s Barber Shop just moved a door down, to a different storefront that is blocking what used to be the main entrance to this house. 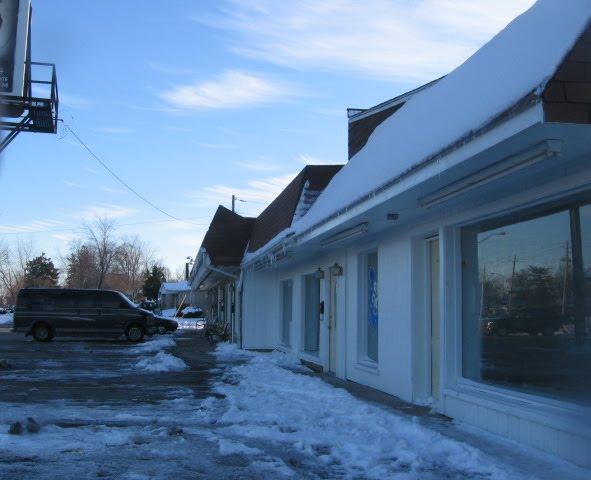 And a rear view reveals that this strip mall most likely comprises two separate private residences that have, to a certain extent, merged their identities under the shared storefront space. A two-for-one conversion. 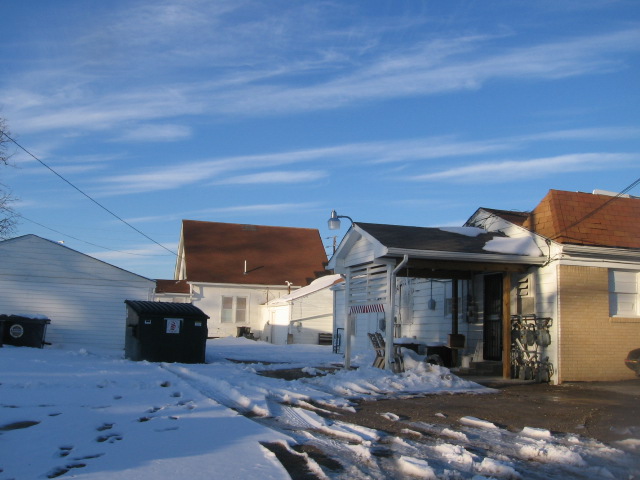 There’s little more to analyze about this quirky structure that I didn’t mention back in November. But another residential-to-commercial conversion proves particularly savvy at employing design to improve the streetscape. Southport, Indiana is an enclave, completely surrounded by Indianapolis but claiming its own mayor, police force, and municipal ordinances. Parts of it retain the character of a separate old municipality, with a handful of commercial buildings clustered around an old rail stop. 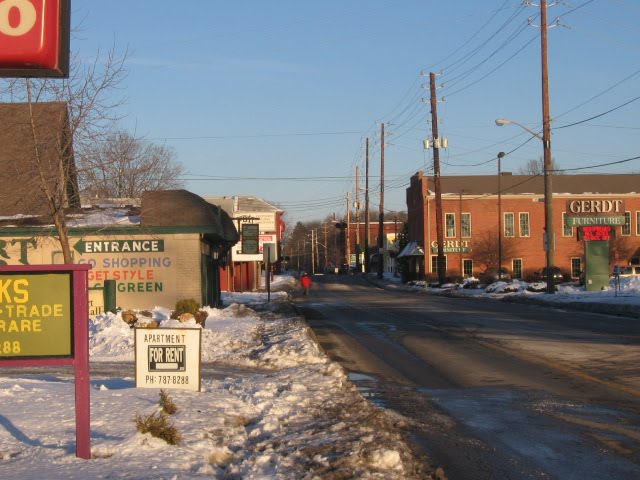 Trust me: for those who like small-town streetscapes, this is really fairly attractive most of the time, and would certainly look better if the business owners shoveled the sidewalks. But look closely at the structure to the far left—here’s another picture: 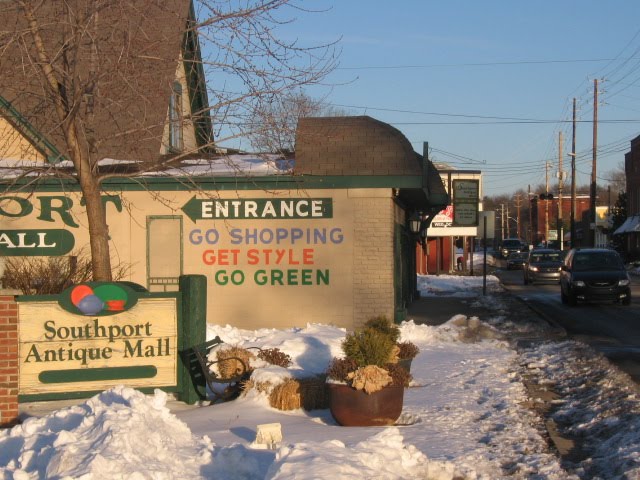 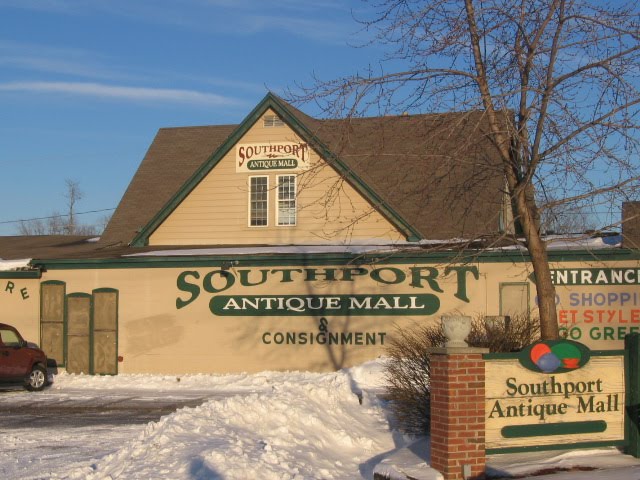 Again, a steeped roof and gable poke out from the cement/brick storefront to the Southport Antique Mall. Now, observe as I have walked past the front of the store to the other side and haven taken a picture of the structure from that angle: 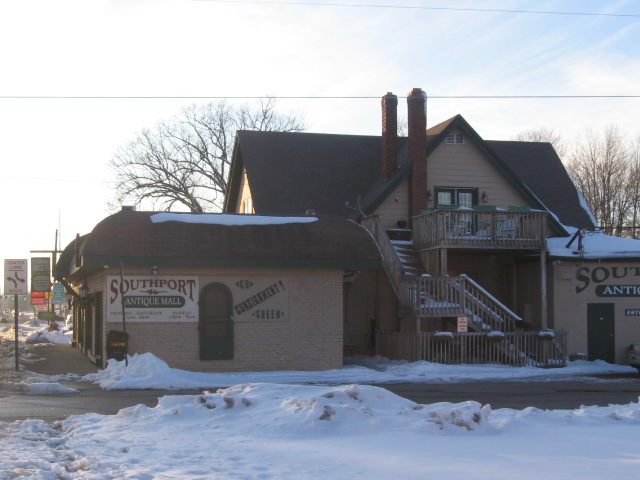 The house is plainly visible from this side. If I recall correctly, the owners of this sprawling antique mall have converted the entire first floor of the home and merged it with the store. The stairway up to the second floor suggests a quick access to the residential portion. If I veer to the right slightly from the previous photo, you can see how this large establishment has adapted to a narrow but deep parcel: 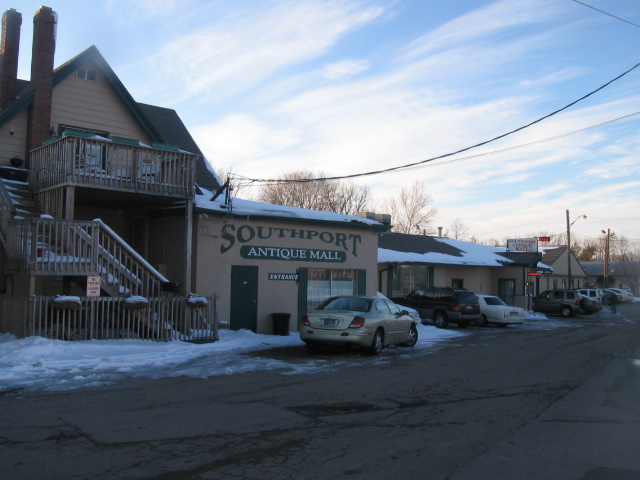 It’s an effective example of the classic home-upstairs-store-below combination, and it extends the streetscape to this brief main-street element of Southport Road. Walking directly in front of the Southport Antique Mall’s main window offers the best perspective: 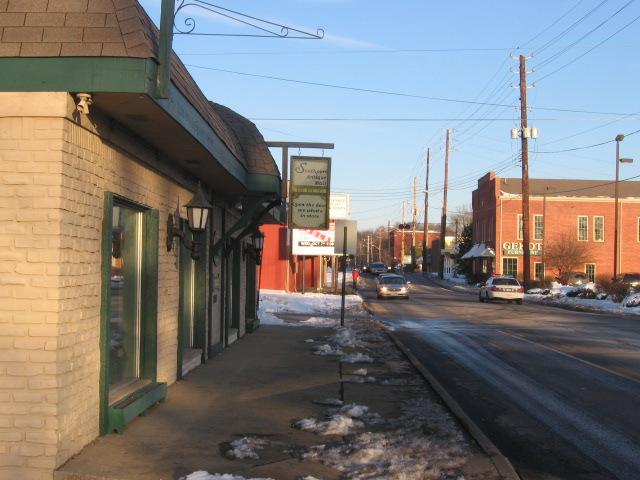 My hat is off to owners of the Southport Antique Mall for their serendipity. I can only imagine that part of the mall’s continued success has something to do with their shrewd adaptation to the main street culture, and antique malls themselves have become a quintessential tenant of old commercial corridors. Even better: they took the time to shovel their portion of the sidewalk!

The other example of a residential-to-commercial conversion is so ubiquitous that almost everyone will recognize the re-use depicted in these photos, even if we hardly bother to notice it. Further south of Southport, on the busy six-lane highway US 31, sit a number of houses that have adapted to the heavy traffic that they must face: 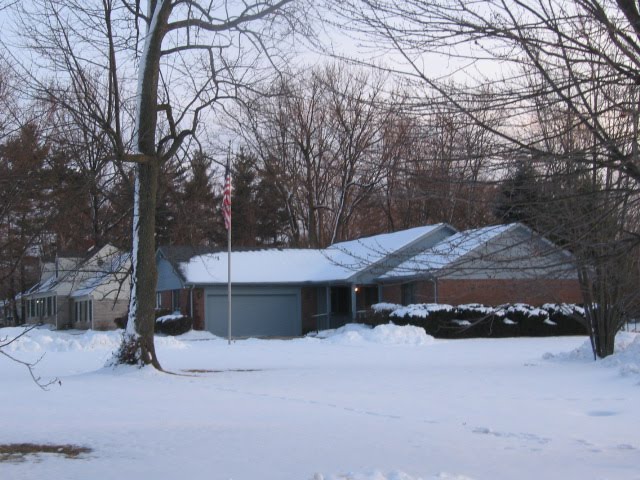 These homes look perfectly normal, but nobody lives in them any more. 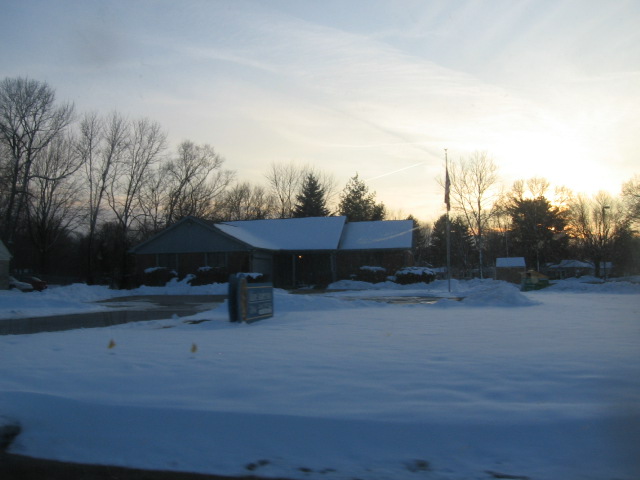 This one has a sign out front that says it’s the law office of Aline Anderson. Here are a few others down the street: 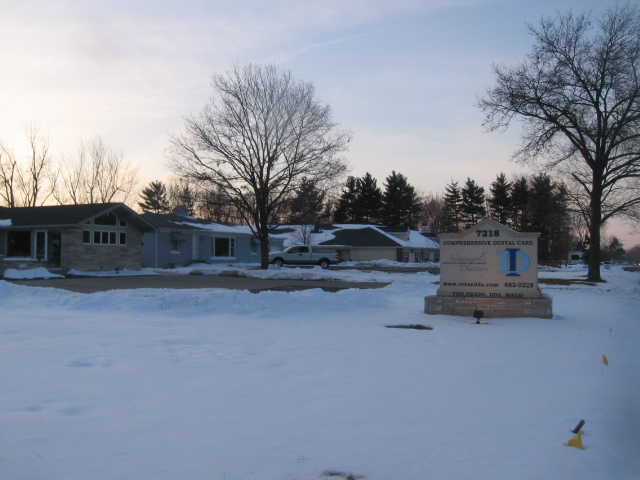 A dentist’s office, accounting, insurance, realtors—that type of thing. All conversions from what used to be private residences.  Directly across the street sits a generally booming conventional suburban strip mall. 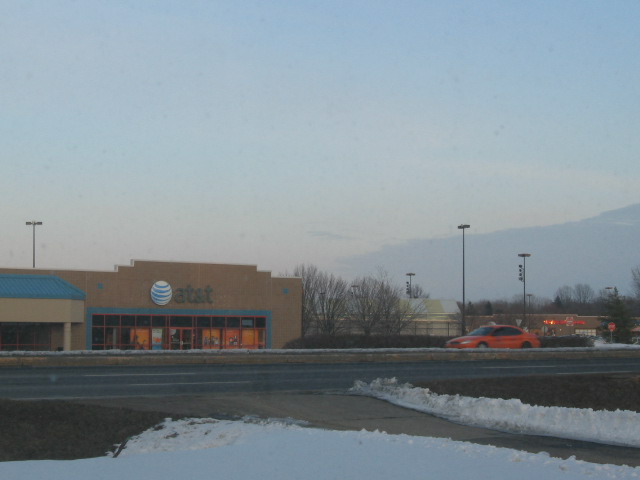 What happened here? Judging from the appearance, most of the homes date from the 1960s, when this area comprised the farthest exurbs of Indianapolis. US 31 was still no doubt a busy highway, but it was only partially developed with limited commercial presence. As population settlement thickened in this area, particularly in Greenwood to the south of where these photos are taken, this major arterial became increasingly desirable for commercial development, further reinforced by the fact that the area featured is now zoned C1. At about the same time, people’s tastes began shifting away from having private residences front major streets. Notice how subdivisions built today nearly always turn inward from the arterial and collector; a neighborhood built after 1990 will typically only have back yards facing the busy street. Thus, the homeowners along the highway found it increasingly hard to sell their properties as conventional single family homes.

Thankfully, one person’s trash is another person’s treasure. For all the reasons that these homes made undesirable private residences, they made excellent potential offices for small business owners—busy commuter traffic, high visibility, most likely far cheaper to buy than space in an office complex. A lawyer could start a private practice by purchasing one and converting it. The public approval process would be painless, since the parcels are zoned in favor of offices, due to the busy highway frontage. And unlike the more pedestrian-scaled Southport Antique Mall, these homes require very little new construction to make them suitable for law/accounting/insurance/dentistry.  The living room in this sort of conversion becomes the main personnel hub; the foyer is reception; the master bedroom is the executive office 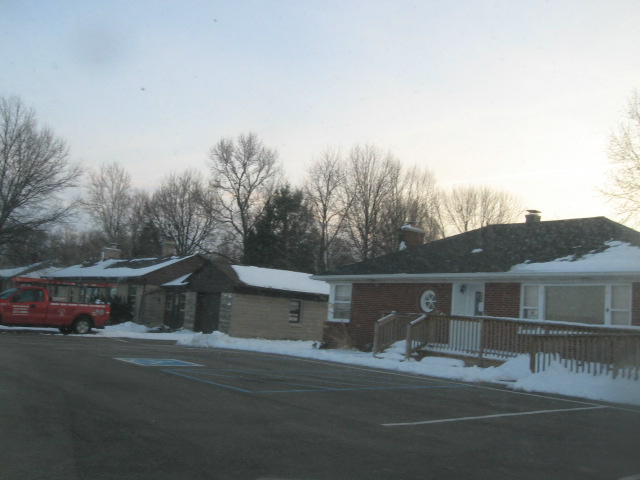 Pave over the front yard, build a ramp for wheelchair access, and bingo! Maybe they punched out a few walls in the interior, but it required little to no extension to make the home suitable for commercial use. After all, these are offices in the automobile age, not storefront retail—who needs big prominent windows? Judging from the pile-up of snow, the new owner may not even use the garage for vehicles. 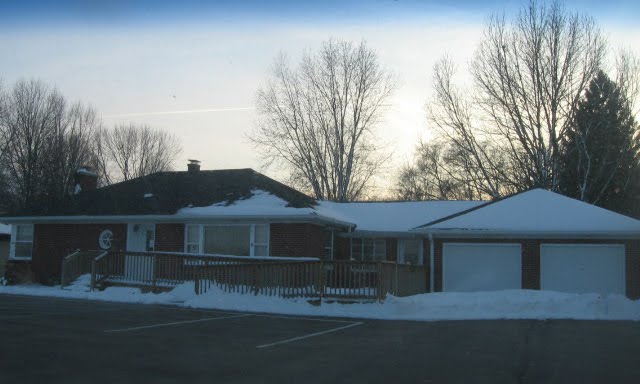 Instead, it could very well be an extension of the offices. Residential garages make great rooms to house the server or IT staff, since it’s a universally acknowledged truth that IT workers have little need for windows or sunlight. 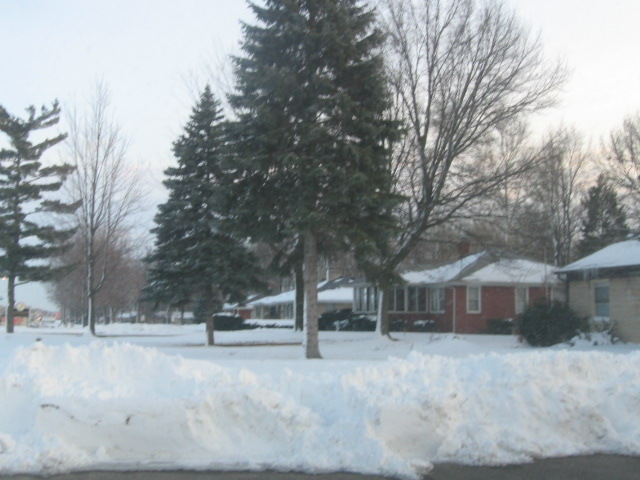 A few of the houses down the road remain occupied by families, but they’re dropping like flies. Twenty years ago nearly all of them were private residences, and in a few more years, none of them will be. One conversion after another.  We could bemoan the fact that, as these structures become part of a larger commercial corridor, few of the alterations help improve the pedestrian environment, but this is not likely ever to be a desirable area for pedestrians, and at least these sturdy houses are enjoying second lives. The subtle adaptive reuse of the Southport Antique Mall may win the award for creativity in “going green” as it claims on its side wall, but all of these examples are more environmentally suitable initiatives than tearing down a perfectly good home, office, or barber shop.