The Battle of the Marts, Part I: In pocketbooks and (mostly) hearts.

The Indianapolis Business Journal recently announced that Felbram Plaza on the near south side had secured a new anchor tenant, in a space last occupied by Target. The tenant, Shoppers World, is a discount department store with one location in the region at the Lafayette Square Mall. These are the first two Shoppers Worlds in the Midwest; all other locations of this small chain are concentrated in the Mid-Atlantic. 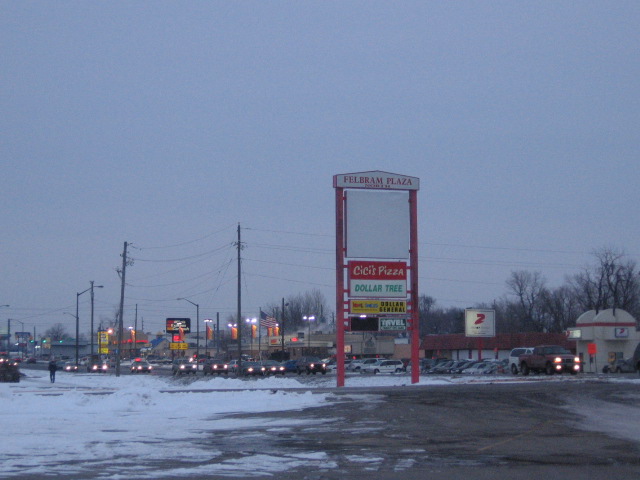 This announcement is a boon to an inner-ring suburban area of town that has seen more than its share of businesses depart over the past few years. Frankly, I was surprised when I heard the news. After all, it was previously a Target—one of the supreme leaders of suburban big boxes—that last occupied this spot, and it probably survived far longer than anyone expected, in a neighborhood that had shed much of its middle class two decades prior. Even in these dusky photos, the painted-over labelscar is still largely visible. 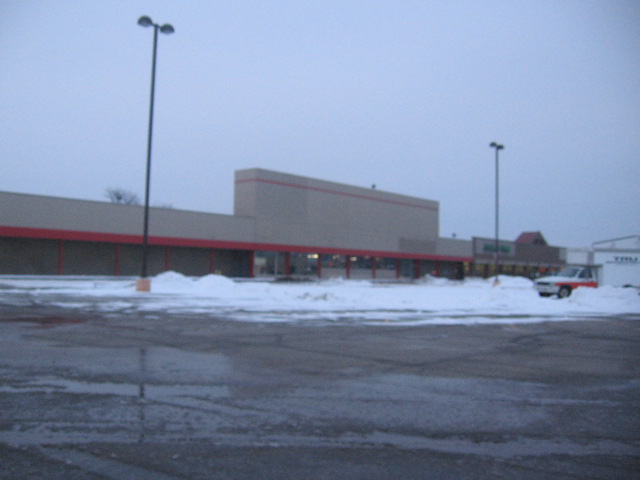 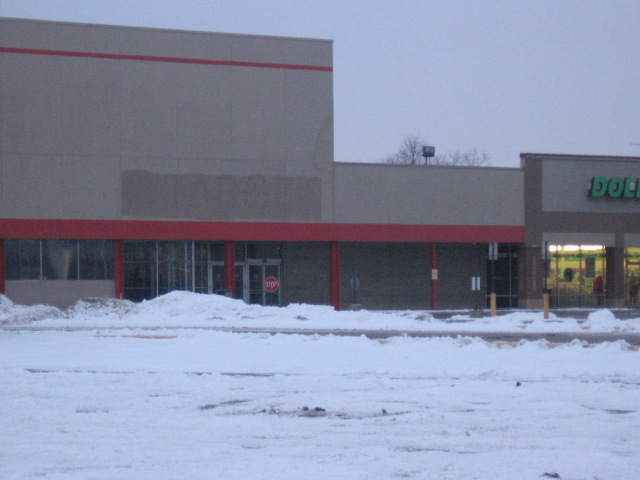 Target’s inevitable closure of the branch raises some important questions about the much-loved chain. Unlike its chief competitor, Wal-Mart, Target has overwhelmingly escaped the ire of urban middle-class “progressives,” who routinely disparage the world’s single largest retailer for its low wages at long hours, meager benefits, stubborn resistance to employee attempts to unionize, and reliance on Asian sweatshop labor to keep its prices so low (it long ago reneged on its original “Made in America” pledge). Entire websites such as Wal-Mart Watch and Wake Up Wal-Mart or the 2005 documentary Wal-Mart: The High Cost of Low Price demonstrate the considerable energy, time, and money that labor unions and other advocacy groups have devoted to disseminating information on Wal-Mart’s exploitative workplace practices. The company, on average, receives multiple new lawsuits daily. According to a study by students at Columbia and Stanford Universities, in recent years, over 35% of Wal-Mart’s proposed openings have met with potent community resistance. Target, a chief competitor of Wal-Mart in every regard, avoids most if not all of this controversy. Perhaps because it abides by a more communitarian business model, because it offers better wages and benefits, because its growth strategy is less aggressive, because its product line clearly targets middle class consumers in metropolitan areas who are willing to pay a bit more for a stylish appearance, perhaps because the aisles and shelves in the stores just look better maintained—all of these factors, and many more, contribute to the fact that Target has become the widely respected (or at least minimally disliked) antithesis of the toxic Wal-Mart.

I find some of the Target-love a bit disingenuous. While I can concede that Target aims for and generally hits the bull’s-eye (target?) on the yuppie worldview, it continues to lack labor unions, and it somehow manages even to dodge one of the biggest cudgels frequently swung at Wal-Mart: that the mega-box effectively destroys communities by killing off the local retail. Even in small communities, the company has routinely abandoned its smaller, 1980s prototypes to build a larger Supercenter just a half-mile down the road. So after it has already shifted the center of retail activity away from the town center, it creates a second void through a new store. But is Target really that irreproachable in this regard? Felbram Plaza on the near south-side of Indianapolis would suggest otherwise. Target is just as happy to roll along with the decentralizing tide as Wal-Mart. Aside from Felbram Plaza, it has vacated store fronts in the inner-ring suburban regions of Indianapolis on the near east and near west sides as well. While the vacant Target on the near east side found a tenant in yet another discount furniture store, the near west side target still looks like this: 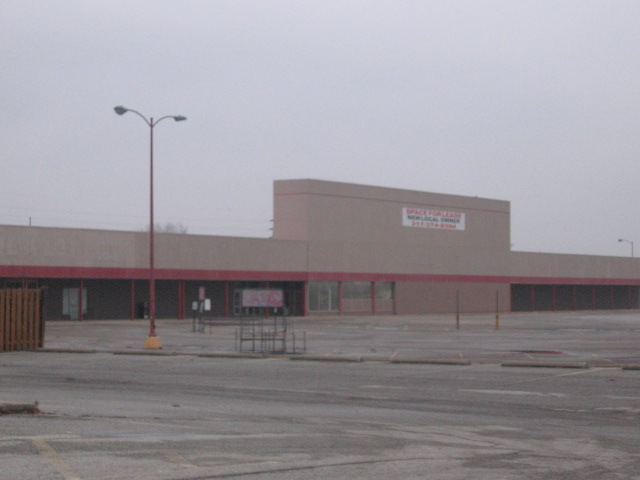 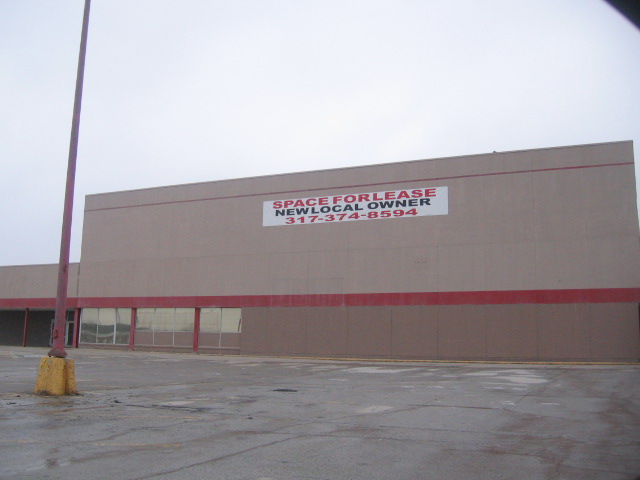 Hundreds of thousands of motorists along I-465 have seen this eyesore of a former Target, in its current condition for over a decade! The popular term for one of these long-vacant big boxes is a grayfield, a visual pollutant to complement the ecologically deleterious brownfields. Here on the west side, the Target Corporation sought greener pastures further out in the suburb of Plainfield. On the southside, it had already found two other flourishing locations before it put the kibosh on the one at Felbram Plaza. To a certain degree, Target is just behaving like any corporation in pursuit of its own best interest: if the net sales per square foot at the stores featured in the above photos was significantly lower than average (and, based on the income levels of the surrounding neighborhoods, the sales probably were quite low), it was only natural for the company to fold its underperforming branches. Besides, both locations were old, small, faded-looking, and poorly suited for an expansion or upgrade. Yet exurban coalitions often rally to attract a new Target location, sometimes even asserting it will boost property values, while simultaneously fighting new Wal-Marts, tooth and nail. Both companies effectively kill mom-and-pop stores through their ability to shove everything under one roof at bargain prices. Over the past few decades, both have followed inordinately successful business models, with rarely flagging quarterly increases in profits. But only Wal-Mart gets kicked around for doing so.

Part of it comes from a particularly nuanced interpretation of the old “location, location, location” maxim. When juxtaposed, the two Marts often compete fiercely as parallel discount superstores; Target usually wins the crowd with greater education and disposable incomes—after all, its prices are slightly higher. But Target also seems choosier with location: the corporation claims approximately 1700 stores, a pittance compared to Wal-Mart’s over 8000 retail units internationally and over 3600 in the US alone. From a drive across rural America one can surmise that if a community has over 10,000 people, Wal-Mart has probably scoped it for a location. If the nearest similarly sized settlement is more than 10 miles away, Wal-Mart has probably found a site in that town of 10,000 or more. They are omnipresent. Target is unlikely to break ground in communities under 40,000—in major metro areas, they pop up with about half the frequency of Wal-Marts. One person recently observed that a metro area will usually have as many Wal-Marts as it has public high schools. Yet Wal-Marts, for all their ubiquity, are rare in the nation’s largest, highest density big cities. Chicago has only one. San Francisco, Boston, and New York City have none. Conversely, Target has effectively assimilated into a number of urban settings, including a flagship store downtown in its home city of Minneapolis.

Why has Target successfully expanded into high density urban settings when Wal-Mart is scarcely visible? No doubt that some of Wal-Mart’s apprehension to enter urban centers comes from its clearly promoted business mission: “Saving people money so they can live better.” Land costs in big cities are often prohibitively expensive and incompatible with Wal-Mart’s relentless pursuit of rock-bottom prices. It is also harder for the company to assemble parcels large enough for its sprawling Supercenters in urban settings, and the lack of available surface pavement hinders the efficient, cheap unloading of merchandise from trucks. Conversely, Target’s slightly higher prices have enabled it to experiment routinely with more vertical configurations, with sites in Chicago’s South Loop (store stacked atop the parking lot), Washington DC’s Columbia Heights (two floors of a multi-tenant building filled with suburban big box stores), and a two-story Target in eminently suburban Metairie, Louisiana. Wal-Mart has ventured into vertical structures in a few select locations on the East and West Coast, but its identity remains wedded to the titanic suburban boxes with parking in front.

While land costs may contribute much to Wal-Mart’s avoidance of dense, urban settings, demographics also play a huge role in this sensitivity to location. The Columbia/Stanford report on opposition to Wal-Mart observed that only about one-third of all of the proposed Wal-Marts that face stringent community resistance end up successfully breaking ground—usually the execs at Wal-Mart surrender and look elsewhere to build. Powerful union organizers have successfully blocked the company’s entrance within city limits, but they alone cannot explain Wal-Mart’s struggles to expand into big cities, since the non-union Target Corporation has opened flourishing branches, even in places like Manhattan. The New York Times has cited the CEO of Wal-Mart, who observed that the urban, affluent New Yorkers/San Franciscans/Chicagoans serve as the greatest barrier to entry in these fashionable urban centers: “You have people who are just better than us and don’t want a Wal-Mart in their community.”

Perhaps the Wal-Mart leadership has shrewdly overplayed the cultural elitism of Manhattanites, turning the tables on the on a segment of the population who perceives itself to be champions of the working class, by reconfiguring the urban progressives within the socioeconomic context they have created; now they are the colossal snobs. Target undoubtedly provides a cleaner looking, more aesthetically pleasing Mart environment than Wal-Mart in which to shop and work. But Target still sells cheaply made products from Asian sweatshops; the biggest difference is that its cheap products are designed by people like Michael Graves. As is often the case, hierarchies of collective taste affect corporate location decisions far more than mere infrastructure. All it takes is another scan of the responses to the Consumerist article mentioned earlier: it’s amazing how many rationalizing back flips people will perform in order to argue that Target is good and Wal-Mart bad, in an attempt to objectify their own personal preferences. But these taste hierarchies exert the powerful influence on land values that determine which parts of a metro exude fashionable urban chic (and are uniformly free of Wal-Marts), which are the blighted and depopulating inner city, and which are like Felbram Plaza on the near south side of Indy—a social and physical environment that is difficult to pin exactly, but clearly doesn’t work for either Target or Wal-Mart. Hopefully the new store, Shoppers World, will have better luck.

I’m sure to provoke with this posting; as always, comments are welcome. In Part II I will explore another high-profile discount Mart that may very well be carving its own niche by boldly venturing in to territory that Target and Wal-Mart shun. And I promise the photo series won’t be so drab.

PrevDiscarded easels from the boardroom.
The Battle of the Marts, Part II: When Wal-Mart is too high-falutin, there’s always…Next

7 thoughts on “The Battle of the Marts, Part I: In pocketbooks and (mostly) hearts.”