It’s understandable that, in an attempt to save a cherished object from deterioration, a caretaker would restrict human contact with it, while keeping it proudly on display.  But what about when the powers-that-be simply bypass it?  This rural scene with a covered bridge in east-central Indiana may be rare, but the motivating spirit behind it takes place everywhere: 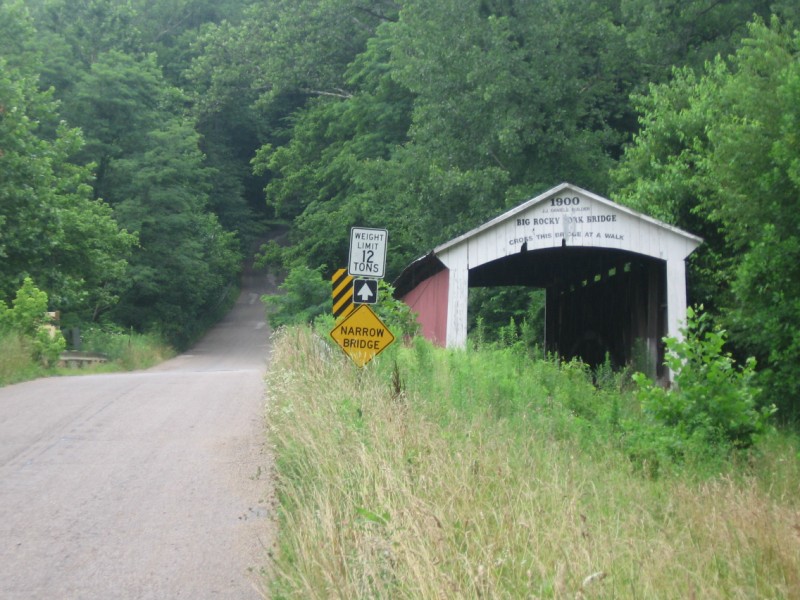 Through the thick grass rests a faded Burr Truss covered bridge, in a region where they are plentiful. Parke County, Indiana, where this one is located (slightly east of the touristy town of Mansfield) claims the highest number of any county in the nation, at 31. Presumably Parke County Inc (PCI), the region’s tourist and visitors’ bureau, includes this bridge among them—after all, the county is only one bridge ahead of its runner-up, Lancaster County, Pennsylvania. But how much longer will it remain a viable cultural artifact if continues to sit in relaxed desuetude? County authorities must have decided a while back to reroute the road so that it circumvents the bridge. The absence of any visible pavement on either side suggests that it happened many years ago, or that it may have even been an unimproved road—the decision to pave could have coincided with the demotion of the bridge. Whether it was decommissioned three years ago or thirty, the bridge itself remains in remarkably good shape: despite a few chipped planks here and there, the paint is relatively intact, the lettering is legible, vegetation around it is thin enough almost to look cultivated. No graffiti that I saw, which might seem unlikely anyway in a sparsely populated area, but we’ve all seen “I LOVE U DEBBY” graffiti along highway overpasses in the countryside.

One can speculate dozens of reasons why the right-of-way might have been diverted; nearly all of them owe their origins to public dollars. Safety issues might have been too formidable to justify continued maintenance. The topography may be slightly more suitable for a bridge just a few feet to the south. (Clearly the highways department wasn’t exactly lavish for the new bridge; it didn’t even invest enough to make it a full two lanes.) Regardless, this benign disregard for a covered bridge seems incongruous with the image Parke County is trying to create: each year the community holds a Covered Bridge Festival, and the PCI provides maps to guide visitors through multiple routes to see the various structures. Why let this one go?

Quick research reveals a bit more about the structure. The Big Rocky Fork Bridge was bypassed nearly twenty-five years ago, and its minimal maintenance passed from the county’s Highway Department to its Parks Department—understandable, since it is no longer part of a right-of-way. Within a few years of witnessing the low degree of stewardship afforded to the structure by the public sector, a local Adopt-a-Bridge program assumed the bulk of responsibility. The resulting patina demonstrates a sort of elegant compromise, transformed from a functional tool to a museum piece. Its mild inaccessibility may actually protect it more than if it were still part of the infrastructure, or if it were clearly roped off from public access. As it currently stands, it just does not imbed itself in the minds of passers-by as much, so outright vandalism would achieve very little impact as an act of defiance. At the same time, it is no longer subject to deterioration from repeated use. At a time when states and municipalities are forced to trim their budgets left and right—resulting in the closure of little-visited sites such as Ernie Pyle’s boyhood home–the Parke County approach seems to be among the least malicious ways of coping with the reality of sour fiscal times, especially since there’s clearly an interest group that ensures its rudimentary upkeep. Collective stewardship frequently requires little more than achieving that careful balance between ignored dilapidation and conservation that sterilizes—and in this country, those that find the sweet spot nearly always win that coveted word: “historic”.

PrevWhy the Greenwood Park Mall gets it right, Part I: the smokin’ location.
Perserverence.Next

2 thoughts on “Preservation by Neglect?”