Discarded easels from the boardroom.

It should come as no surprise that a prolonged period of economic doldrums often fosters a collective hesitation. We’ve witnessed it for the past year with the sharp retreat of consumer spending coupled with job losses, in which the cause-effect nexus is just about as chicken-and-egg of a phenomenon as we’ll hopefully ever see. But it influences design as well: developers are far less willing to embark in bold, risky architecture when the economy is bad; in all likelihood, the banks won’t lend them the money. In short, any scarcity of cash flow is likely to slow the evolution of human landscapes: the churning energy of new construction may even stop dead in its tracks.

Detroit, no stranger to downturns, even when the rest of the national economy is often surging forward, offers a widespread cultural embalmment whose bifurcated consequences has made the city’s contemporary appearance seem that much more perverse. While the absence of job growth has frozen much of the downtown so that the architectural massing and “feel” of the city takes a visitor back to its 1950’s heyday, the lack of public stewardship over the years for these gilded-age relics has resulted in serious decrepitude. Neglect can only preserve for a limited time. Eventually, it will all implode, not unlike the way the great Hudson’s department store headquarters came down a decade ago—only much of it will happen without any further human intervention.

Until the city of Detroit is a permanent and consistent ruin—which hopefully will never be the case—one can try to look upon the most desolate parts of the city with a glass-half-full approach, seeing how subtle little blips in popular culture survive when no economic incentive exists to extirpate and replace it. Not too far from the central Grand Circus Park is the sign for what appears to be a recently closed Quiznos: 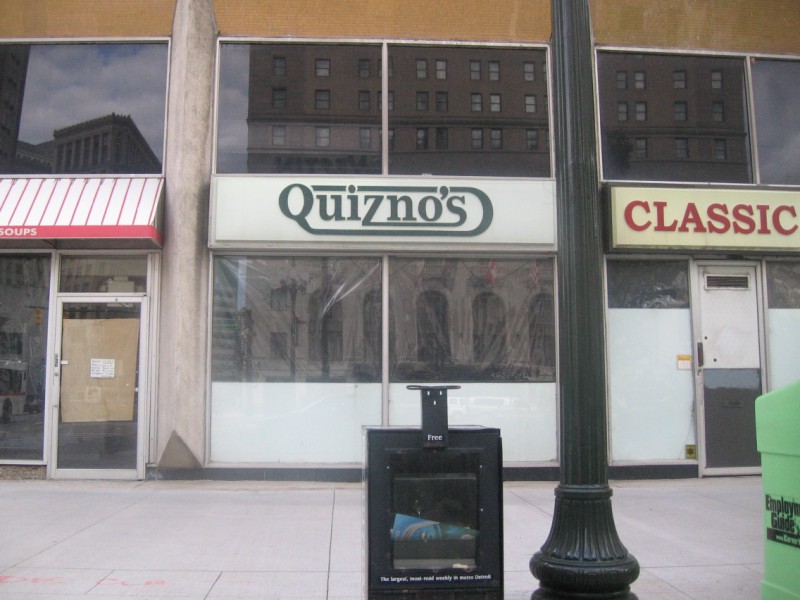 By now, everybody is at least aware of the nation’s second largest fast-food sandwich chain (behind the long-reigning champ Subway), but what, aside from the yellowed, faded sign, makes this particular franchise seem like such a time warp? The Wikipedia article features images of the original location of this Denver based chain— 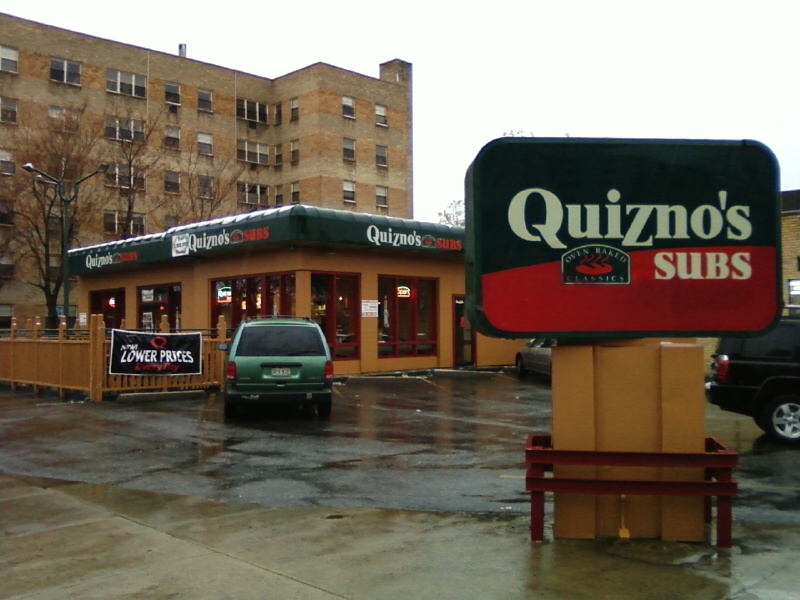 —as well as the current design:

This oddity in downtown Detroit fits somewhere in the middle chronologically; I can find little other evidence on the Web of when or where the company ever used this style for the label—just one little remnant on Brands of the World. Clearly it didn’t catch on, and apparently the Quiznos’ leadership determined that a franchise in Detroit was not worth enforcing the update. But it still offers hints at the rationale behind the evolving logo, supplemented by some very modest research.

Contrary to popular belief, Quiznos was never a family establishment that made it big. It began as the creatively titled Sandwich World in an old Sinclair gas station. The new ownership who bought the operation in 1980 determined that Q and Z are the least used letters in naming, so a word that incorporated them both would strike the public as distinctive. No doubt the application of the possessive to the word endowed it with more of a feel of a last name—a sandwich shop run by Mr. and Ms. Quizno—helping instill the notion that the restaurant was a grassroots endeavor gone global due to its huge success in its original location.

The 3500-plus shops in over a dozen countries prove that the scheme paid off. But it is this vague middle-period logo, carefully preserved in an ailing city with more than its share of vintage signs, which offers a potential window into the mind of Rick Schaden, the original franchiser—or at least his marketing advisers. I’m hardly a marketing genius, but I can see where the original naming comes into play. Note that the two favored letters—the Q and the Z—feature most prominently: first the endpoint of the Q is stretched to form a race track around the majority of the title. And the Z‘s endpoint stretches to meet with the S—also an important letter because it signifies the possessive. Lastly, the large apostrophe cuts into the race track, making it stand out and drawing further attention to the possessive which helps suggest that this idiosyncratic nonsense word Quiznos is a last name.

The contemporary logo suggests resignation. Fewer serifs make it sleeker and more modern, and it smartly avoids underlining the “no” in the name, which the ill-fated Detroit incarnation did…twice! The Quiznos company is ubiquitous, so it no longer needs to announce that it sells sub sandwiches on its signs, though of course it still proclaims the “TOASTY!” quality that originally distinguished the brand. The company also dropped the apostrophe, possibly out of a realization that the cryptic name reference is a no-longer-necessary red herring; one shrewd observer recognized that the apostrophe-s combination is rarely used in other languages to indicate possessive, so the company leadership may have hoped to internationalize the brand.

Much ado about nothing. But a further exploration of Detroit’s many forgotten nooks—those, of course, which haven’t been demolished—is likely to turn up other marketing relics of companies that have advanced more confidently into the Information Age than the Motor City.

PrevCountry Chic, Part II – Transforming Rural Character into a Hot Commodity.
The Battle of the Marts, Part I: In pocketbooks and (mostly) hearts.Next