I’ve discussed recently the challenges that certain suburban areas within Indianapolis city limits are facing at attracting newcomers. Essentially the city of Indianapolis consists of nine townships, with Center Township holding the lion’s share of historic neighborhoods and an infrastructure that one might generally perceive as “urban”, as well as much of the most pervasive inner-city poverty. The other eight townships, like the perimeter squares on a tic-tac-toe board, are the “collar townships” and are, by and large, suburban in character. However, they have increasingly lost their appeal to the newer, lower taxed, poverty-free suburban areas that fall outside of Indianapolis city limits, in neighboring counties such as Hamilton, Hendricks, and Johnson. These latter counties host the fast-growing suburbs of Fishers, Carmel, Plainfield, and Greenwood, among others. Meanwhile, the eight collar townships in Indianapolis suffer from higher taxes, school systems with measurably weaker statistics, costly insurance premiums, and increasing levels of crime, while failing to benefit from the historic character or urban appeal that some of the gentrifying neighborhoods in central Indianapolis can boast. Even the close proximity to downtown doesn’t always offer bragging rights: though downtown Indianapolis is more vibrant and densely populated than ever, it long ago lost its primacy as the focal point for office space. Many of the metro’s primary white-collar jobs are scattered throughout the north side and suburban areas of the city. In short, the collar townships are losing all of their competitive advantages. What can they do to remain viable places to live? 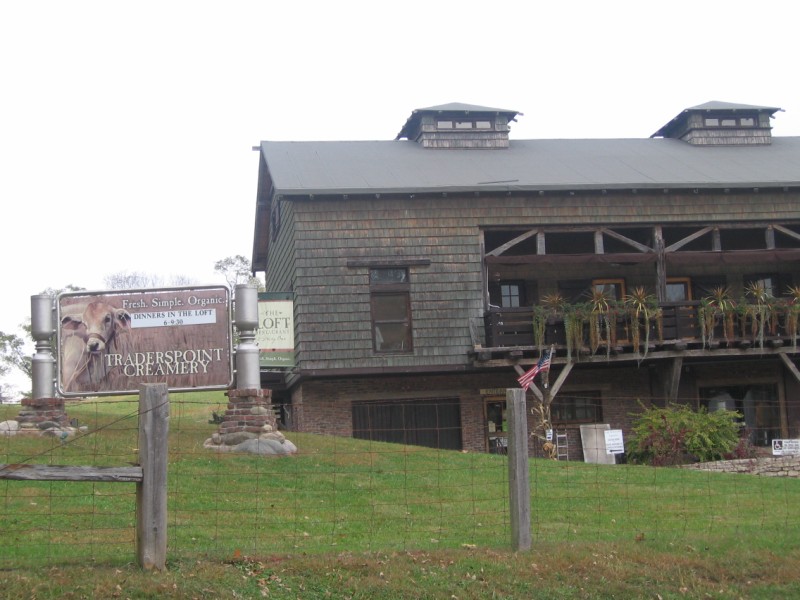 A humble little business on the northwest side of the city has inspired me to go out on a limb with this highly speculative post. I first featured Trader’s Point Creamery on an earlier blog post when I interviewed the business about why it chose not to operate as a vendor at the Indianapolis City Market. Its location among the rolling hills of the far northwest corner of Marion County would appear to the unacquainted visitor to seem bucolic and agrarian. But the Creamery rests within the Indianapolis city limits, and it has taken admirable advantage of the area’s topography, demographics, and settlement patterns to find a niche that is likely to support its success for years to come. And its success is unquestionable: since its establishment as a quiet organic dairy farm around 2002 and 2003, its products have expanded throughout Indiana and Chicagoland to 16 states across the Midwest, South, and Northeast. The cheese and yogurt have won recurring national awards, and now the farm offers regular tours as well as a full-scale restaurant called The Loft with rotating menus. No doubt the dedication and business acumen of its owners has played a pivotal role, but the location itself couldn’t have hurt. 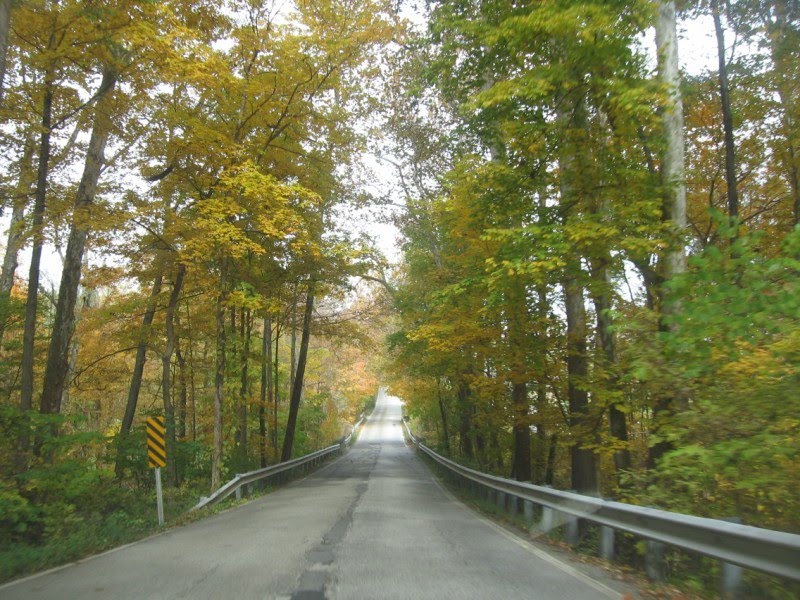 The picturesque drive northward along Moore Road toward the Creamery rests in Pike Township, one of the aforementioned “collar townships” of Marion County. The business derives its name from the rural settlement Trader’s Point, which generally refers to the broad triangle of land, at least 5 square miles in area, framed by three major limited-access roads: Interstate 65, I-465, and I-865. The community has no discernible commercial hub; it remains dominated by farms, large-lot subdivisions, and country estates. With the exception of a commercial/corporate plaza at the interchange of I-465 and 71st Street in the far southeast corner of Trader’s Point (too far from the center to be called the heart of the community), the area is almost exclusively residential. Though long-known by many local residents for its history as a point of commerce between 19th century settlers and Miami Indians, only in recent years have advocates attempted to reveal the community to the eyes of the greater Indianapolis metro. The Creamery has helped elevate Trader’s Point to a national level, at least among dairy enthusiasts. A trip to the grounds provides ample evidence of how much the location matters: 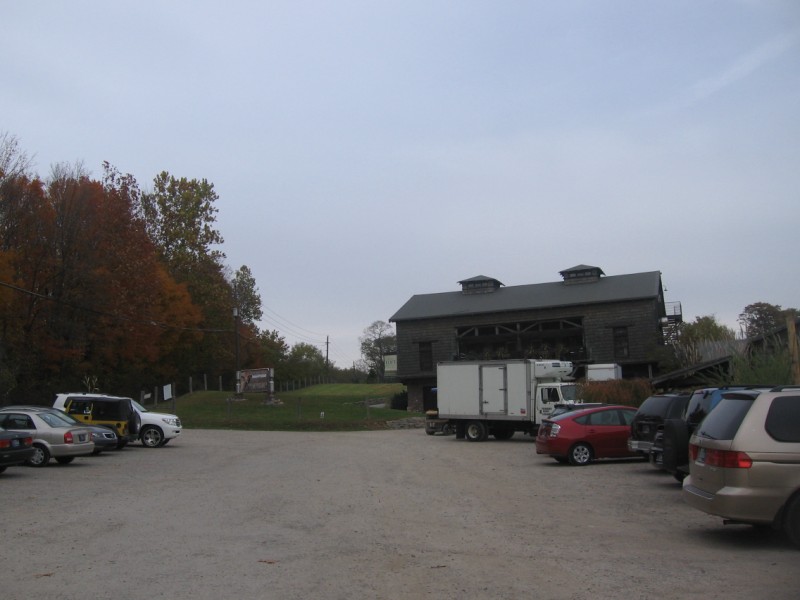 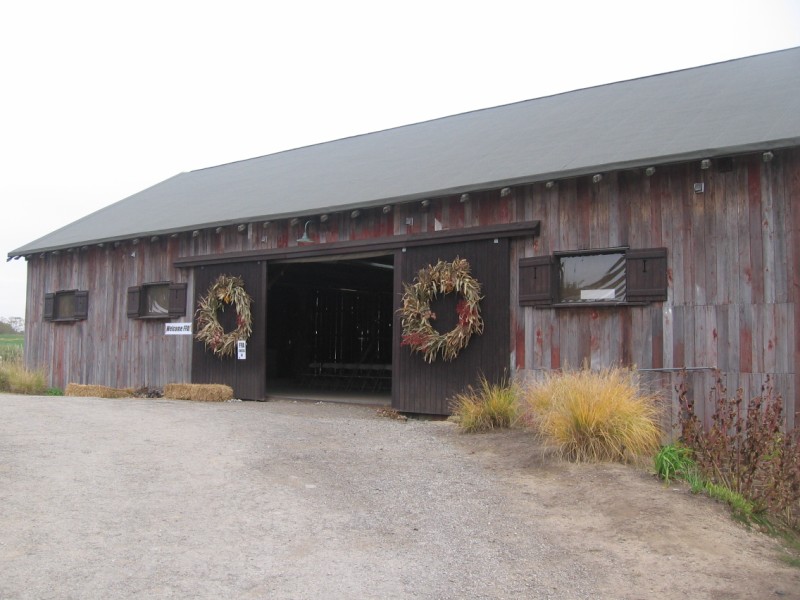 From the gravel drive to the weathered wood façade of the structures, nothing about the sprawling 320 acres would suggest that it occupies a sparse corner of this city of 800,000 inhabitants. The topography of the grounds effectively put the pasture on display while concealing any neighbors, giving the picnic area below the semblance of pastoral serenity: 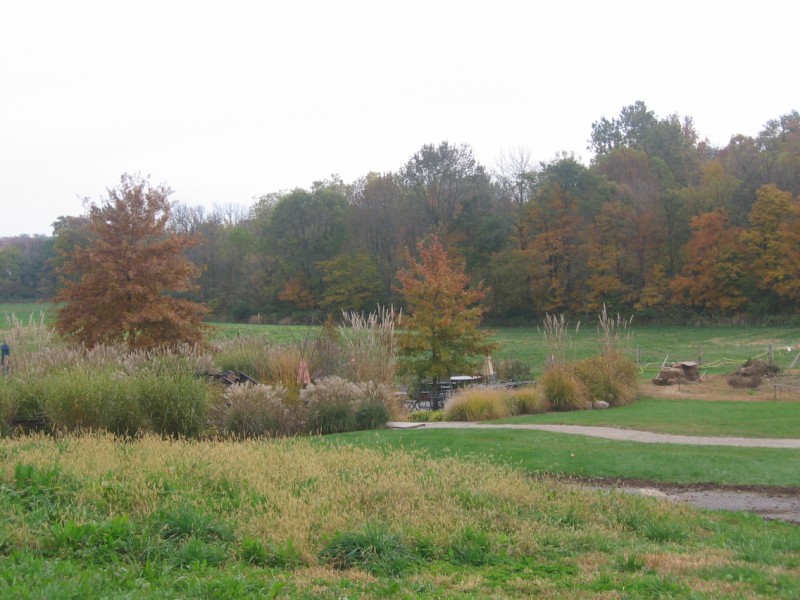 Inside the tiny storefront, a thumbtack-filled map shows visitors coming from nearly all 50 states; this place has a reputation. 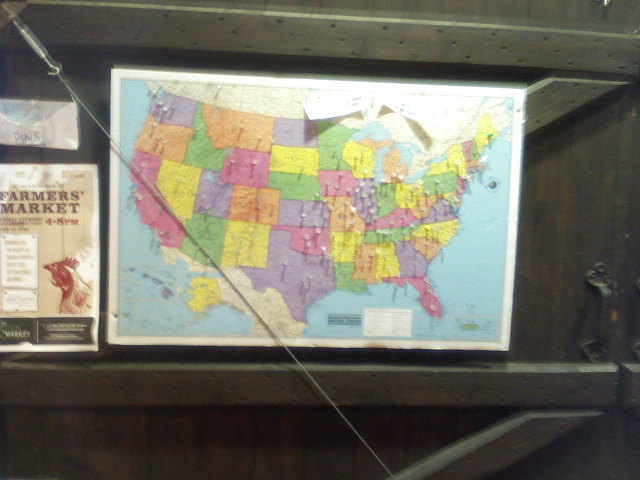 On a gloomy afternoon in the late fall, The Loft restaurant upstairs is packed with a lunchtime crowd. 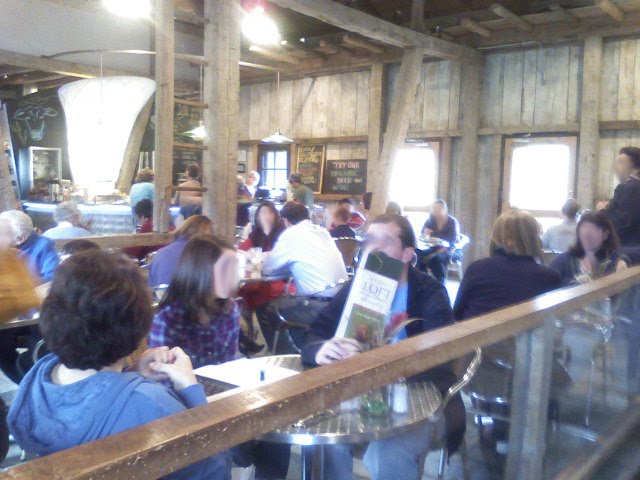 Lest I seem like a promotional mouthpiece for Trader’s Point Creamery, I will shift the focus away from the establishment back toward its surroundings. Travel just 500 feet up Moore Road to the north, and you are in the thick of the woods. 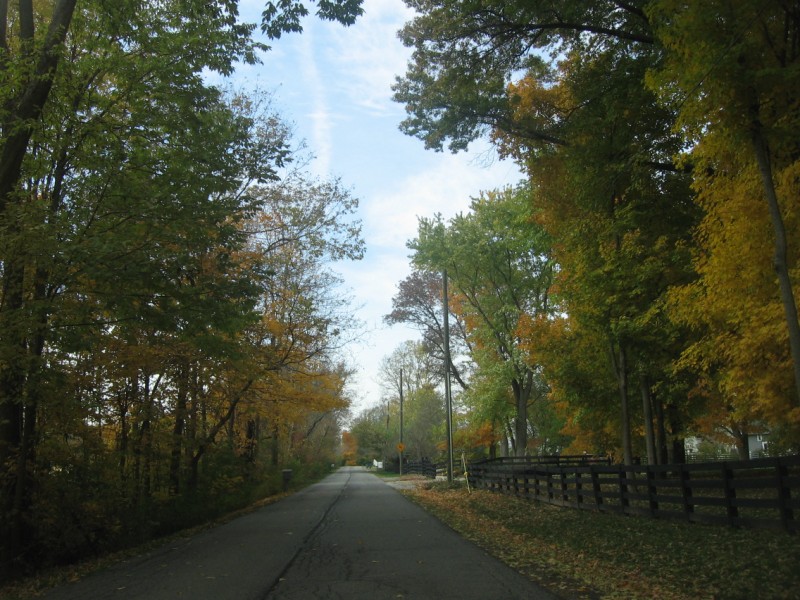 Trader’s Point Creamery is not an anomaly within this part of Indianapolis; it blends right in. For all the talk about densifying urban centers, a business such as this could not easily prosper if this part of the city were thickly covered with urban or suburban-style development. Trader’s Point is not a small-town enclave engulfed by the broader city, like the places referenced in my post from last week/last year. It’s not part of the commercialized suburbia one can find just a few miles away in almost any direction, nor is there enough nascent development to make it convincingly exurban. It’s rural. And apparently, its citizens have every intention to keep it that way: just a few months ago, a broad swath of 2,600 acres, straddling Indianapolis and Boone County to the north, was admitted to the National Register of Historic Places, as both the Traders Point Eagle Creek and Traders Point Hunt Rural Historic Districts (severed in two by I-865). Since it is not an official legislative act of farmland preservation, time well tell whether the designation effectively protects the area from encroaching development. Regardless of the future of Trader’s Point, it helps to affirm the character upon which the Creamery has capitalized.

However, not all that transpires in this community reflects pastoralism. A drive through Trader’s Point might initially seem like any other agrarian part of America, but the whiff of affluence should be a dead giveaway. Some might call them McMansions, but much of the housing in Trader’s Point has stood long before such a label existed. Income levels here are generally high, with median household earnings at $85,093 for the primary census tract in 2000; with 57.2% of people over 25 years possessing at least a bachelor’s degree, educational levels are commensurate with the high incomes. Trader’s Point Creamery has a built-in base of affluence for its 100%-organic, grass-fed dairy products, or the eclectic tapas it serves upstairs at The Loft: the incomes and education levels of its typical consumer base necessitates the proximity of a major employment center characteristic of a large city. A business such as Trader’s Point Creamery might succeed elsewhere in Indiana far removed from a city due to grocery outlets and online sales, but it wouldn’t pack its restaurant at lunchtime on a weekday. Without interviewing a single patron of the Creamery, I can’t help but suspect that the demographics that support this establishment largely fit the mold of “bourgeois bohemians” that David Brooks affectionately skewered in his Bobos in Paradise: environmentally minded folks with a hefty disposable income and a strong urban affiliation. Such is the defining character of the Trader’s Point community within the township of Pike in the much larger city of Indianapolis.

At the eleventh hour (literally!), and for fear of this getting too verbose, I have decided to include the second half of this essay at a later post. Stay tuned as I speculate how the rural character in this deceptively fragmented part of Indianapolis can work to the city’s widespread economic advantage.

5 thoughts on “Country Chic, Part I – When Farming Becomes Fashionable.”