Time to break down those cubicles at DPW?

Most cities’ Public Works Departments have several sub-departments within the larger entity. For Indianapolis, those smaller units consist of Customer Service, Engineering, Environmental Services, and Operations. Obviously I have no idea what the day-to-day events in this department entail, so I always need to approach any serious shortcoming with measured criticism. But it doesn’t take 20/20 vision to recognize the oversight in the downtown photo below: 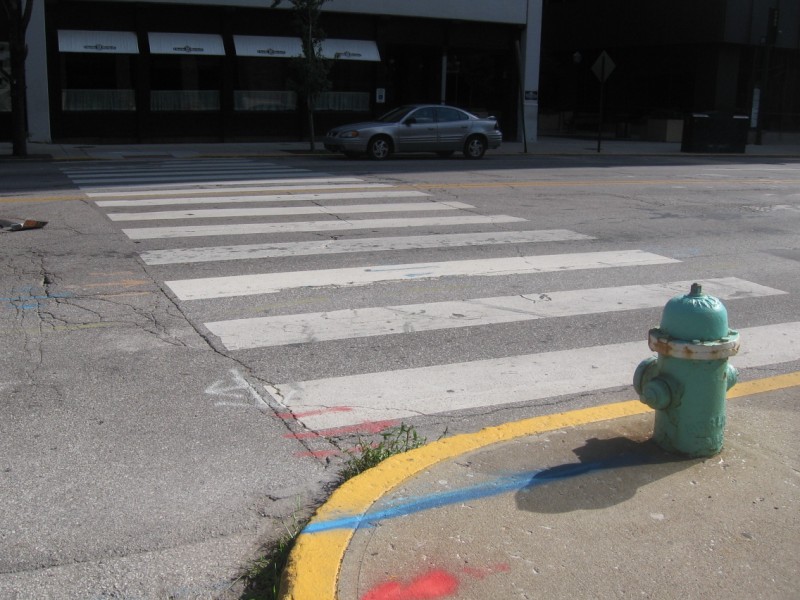 I credit the City for at least providing a mid-block crosswalk here, something that far too many critical crossing points in downtown are sorely lacking. But did the Engineering Department—who purportedly designs and constructs such schemes—have any communication with the Operations Department, who maintains them? Or what about Veolia Water, who has managed Indianapolis Water since 2002, winning a bid to form nation’s largest water public-private partnership after the City bought the waterworks from a regulated utility? It’s hard to know how this boondoggle began. Most downtown hydrants and their associated water mains have been in place for ages, no doubt long before many of the crosswalks. Thus, it would appear that engineers striped the crosswalk to lead directly to this spot, which would be a practical and convenient location if it weren’t for the hydrant.  Or the absence of a ramp installation.  And it wouldn’t be entirely fair for me just to use this photograph as the basis of criticism, which provides such a biased visual perspective as to reduce the photo to propaganda. Looking at it from the other side of Ohio Street demonstrates that the oversight isn’t quite so egregious: 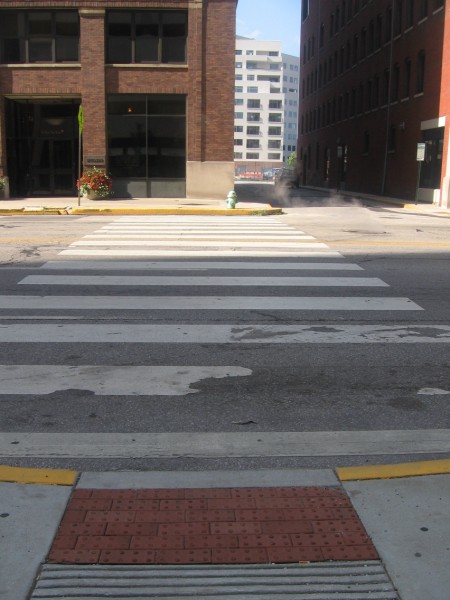 At least from this side of the street, the disabled access ramp installation is plainly visible, and, thanks to the Tactile Walking Surface Indicators (“dot tiles”), clearly felt by the visually impaired. And, by scanning across the street to the other sidewalk, the hydrant is clearly sufficiently offset to the right that a similar ramp installation should not be a problem. In addition, the alley directly to the right of the hydrant does have a handicapped ramp shrouded in the shadow, so a wheelchair could easily veer to the right, onto the alley, and then make a hard left to access the sidewalk. So, for a non-disabled person such as me to complain about this would be splitting hairs; the Public Works Department has far bigger fish to fry. And it is very possible that this remains a work in progress: while the crosswalk striping appears fairly old, the ramp with the dot tiles must be relatively new; dot tiles were not ubiquitous until a few years ago. But if I were to wager that it will be at least two years before the sidewalk with the hydrant receives an access ramp in order to complete the crosswalk, I suspect my pockets would be fuller than they are today.

One can mostly likely attribute this blunder to one of two scenarios. 1) The full construction plan has stalled due either to budget or engineering constraints (it is possible that ramp installation could compromise the integrity of the water main that services this hydrant, making an otherwise simple process more costly through risk aversion). 2) The existing DPW budget for handicapped improvements, as meted out to Engineering and Operations, fails to make room for empathy. No doubt at least one engineer or project manager observed this shortcoming but had to shrug it aside because the budget only allows X ramp installations per year, and a remedy to the hydrant predicament here would total X + Y. And after all, a wheelchair can easily access through the path I articulated earlier, visible in the second of the two photos above. These two scenarios clearly bleed into one another; scenario 1 is a failure at the planning stage, and 2 occurs during implementation. The result that we see is a stalemate. Nothing is going to change until someone with a legitimate case files a public grievance. By most measurements, we have much ado about nothing with this minor crosswalk in a part of downtown that hibernates on the weekends. But attention to seemingly petty public infrastructural details—the absence of pedestrian-oriented street signs is another Indianapolis weakness that I blogged about in the past—remains the most efficient, workmanlike means of instilling a sense of stewardship towards public space. It is no less important than a consistent removal of graffiti, except that both the private and public sector share the burden of vandalism. One can only hope that the situation that finally impels the DPW to complete this crosswalk doesn’t involve the injury of a disabled person.

PrevRoadside Americana gets flair.
Invisible fences for humans, Part I: The Columbus example at the ground level.Next