When a community takes a banal public works project and gussies it up, it is certain to divert a visitor’s gaze—what normally blends in to the landscape because of its ubiquity and sheer ordinariness has suddenly become remarkable. Other initiatives simply attempt to camouflage what the public almost unanimously agrees is an ugly piece of infrastructure. But when the improvements of that electric substation, those fire hydrants, overpasses, or retaining walls employ a subtle design implemented with fiscal responsibility, the positive branding for the associated community could, over time, transcend the cost. The difficulty of capturing this ROI through a cost/benefit analysis no doubt stalls some of these public-sector beautification initiatives, but every now and then a smaller town pulls off something charming, exemplified by this water tower outside the southern Indiana town of Scottsburg, on the east side of busy Interstate 65: 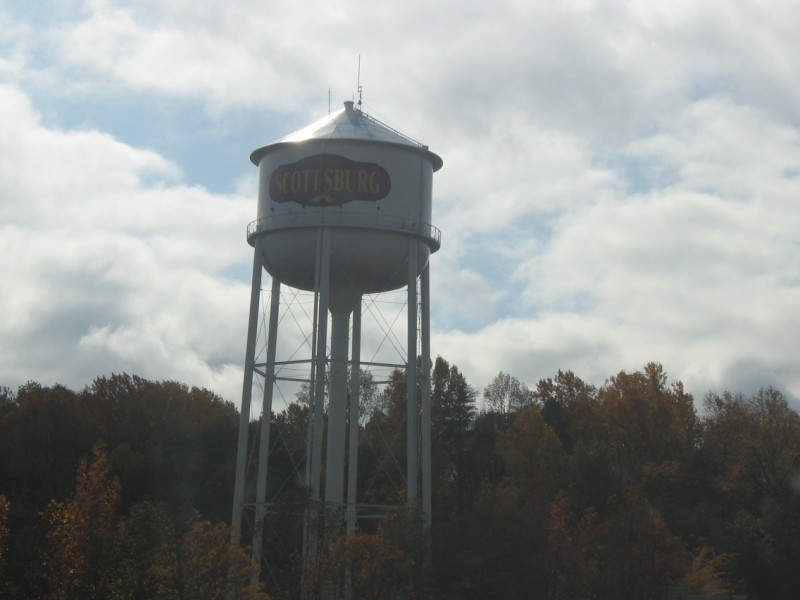 Since the Industrial Revolution, these top-heavy leviathans have presided over communities of all sizes, serving a purpose that the public overwhelmingly neither questions nor fully understands. They typically elevate a reservoir of water to use during a power failure (when the pumping stations cannot operate). The height of at least 100 feet induces a level of hydrostatic pressure through gravity that expedites widespread distribution across the piping system and the ability to flow powerfully from a tap. While large buildings in urban America routinely host water towers on their roof tops, they frequently blend in with the clutter of other prominently tall structures nearby. The freestanding, bulbous “mushroom” water towers play a quietly iconic role across suburban and small-town America, but rarely do they feature anything more than the name of the town in large black lettering. The City of Scottsburg, Indiana’s decision to place the town’s name in a handsome serif font with a decorative border adds distinction without being gaudy; it announces rather than merely informs.

Is the Scottsburg water tower design remarkable? Not really—but that in itself makes it worthy of recognition. On a scale of ambition from 1 to 10, 1 representing the standard water tower, Scottsburg may only get a 2 or a 3. But a 2 or 3 for a town of 6,000 amidst a sea of 1’s, these small efforts indicate a community willing to demonstrate a greater-than-average degree of stewardship for its most ordinary spaces. I can recall in particular that the suburbs of Chicago are littered with boring water tower graphics. Another contrast for Scottsburg is the water tower in Carmel, the state’s wealthiest large city (with a tremendous infrastructural investment to boot), which may have a more Spartan design but made no effort to distinguish itself in terms of an attractive paint job. The most remarkable water tower designs across the world are unambiguously flashy—Europe has quite a few elegant brick-and-mortar examples, the likes of which would probably infuriate most US taxpayers. In America the most eye-catching towers typically involve kitschy fiberglass pop art, such as the corn tower in Rochester, Minnesota or the peach-with-a-posterior in Gaffney, South Carolina. Perhaps these elaborate confections were cheap to build as well, or maybe they didn’t require a dime of public money, but they convey a certain extravagance that makes them a tough sell in small towns like Scottsburg. For example, Ypsilanti Michigan’s notorious “brick dick” water tower is a deserved community icon, but its Joliet limestone base was undoubtedly a formidable investment at the time of its construction over a century ago.

My opinion is that Scottsburg inadvertently followed the example of Florence, Kentucky, which initially decorated its tower with an advertisement for the new Florence Mall, until the Commonwealth determined that it violated a law by exceeding the height limits for a sign promoting a business that didn’t exist directly along the interstate. The Mayor of Florence cleverly opted to adjust the “M” of “Mall” to a “Y” through a few careful strips of paint, saving the city hundreds of dollars over a complete repainting and transforming the tower into a whimsical local treasure. It’s nothing fancy, but the tower has said “FLORENCE Y’ALL” for the past thirty years. I hardly know what the residents of Scottsburg think of their water tower, but it’s far more likely to elicit positive publicity than it otherwise would, and at the fraction of the cost of those opuses in Michigan or South Carolina. A few extra strokes of the paintbrush elevated it above the mundane. During the holiday season, the Town drapes the tower in Christmas lights along the poles and prominent edges, creating a colorful beacon that motorists can see along Interstate 65 miles before they actually pass it. Across the nation, water towers elicit a variety of reactions, from complaints of public eyesores to cherished historic landmarks—my suspicion is that the folks of Scottsburg have something they’d hate to give up.

This essay could easily be much ado about nothing, but these small, thoughtful design gestures contribute far more to building a favorable impression about a place incrementally. A little down the street from Scottsburg, the small city of Columbus, Indiana has incorporated stylistic verve into its bike racks: 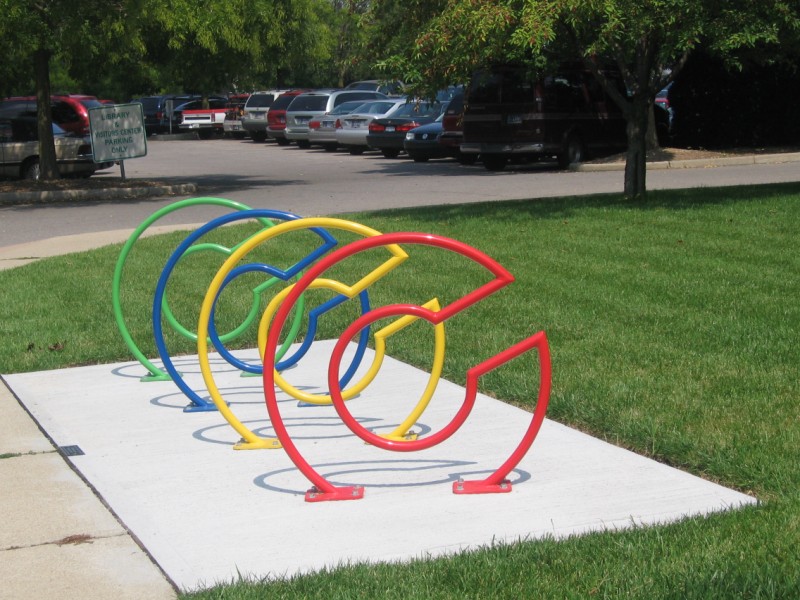 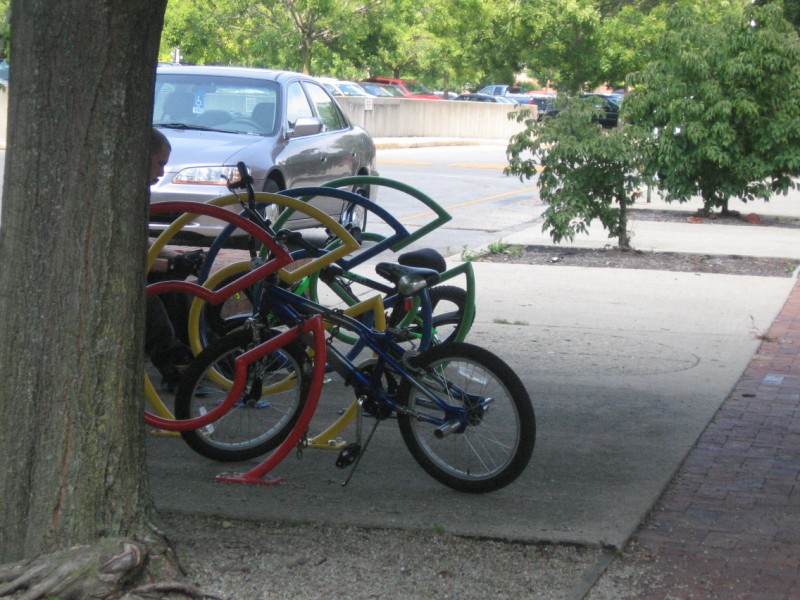 These multicolored, jauntily angled C’s echo the logo the City has adapted the past few years as part of its broader tourist initiative. 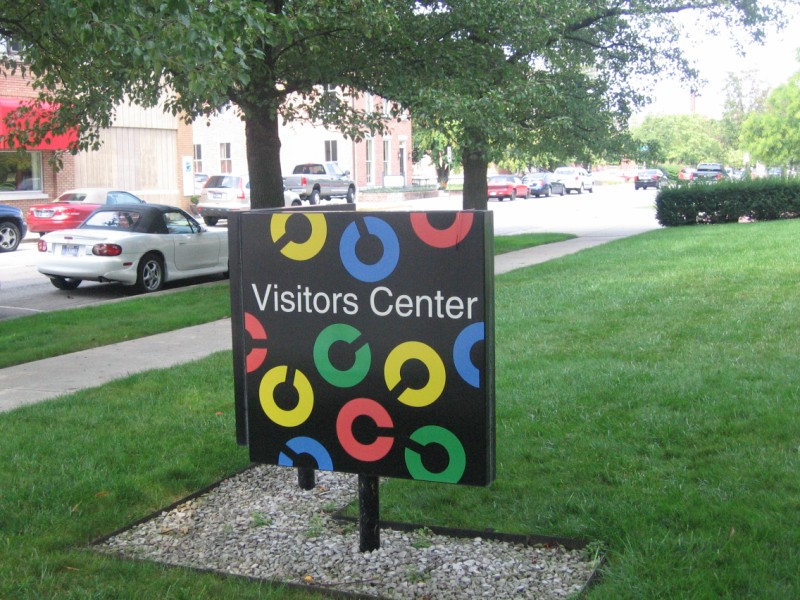 As many know, Columbus is unique for having greater civic support for innovative design than just about any city of its size in the country—perhaps the world. (Indianapolis, unfortunately, can only dream of such organized design advocacy.) This nationally recognized little city may offer far better proof of what innovation in the built environment can achieve than a largely unknown town like Scottsburg, but somebody clearly sewed the seed among Scottsburg’ citizenry—perhaps unconsciously—and it blossomed into a far better piece of interstate folklore than the millions of passers-by are used to seeing.

PrevSwimming hazards are amplified.
Time to break down those cubicles at DPW?Next