Of all the major department stores hoping for bang-up business over the holidays (at least compared to the 2008 nadir), perhaps the one that’s been the quietest in recent years is Sears. For over half of a century, the Sears, Roebuck and Company was the number one retailer up until the early 1980s, before the rapid ascension of the juggernaut Wal-Mart and its respective competitors. It remains a mainstay in many middle-class suburban malls across the country, though it has been common knowledge for quite some time that the company is a shadow of its former self. First squeaks of Sears’ struggles began as long ago as 1993, when the company discontinued its “Big Book” catalog, which signaled the end of a once prominent retail medium. It continued over the next decade to divest itself of superfluities such as its retail credit division a decade later, only to be purchased by another floundering retail giant, Kmart Holdings Corporation, in 2004. The new company, Sears Holdings Corporation, continues to operate stores under both brands, but even their combined power still ranked them as merely the 8th largest retailer in 2008 according to the SAP study, with no changes in sales from the previous year. It is routinely listed as a company where bankruptcy appears eminent.

But you hardly need to study investor reports to get the vibe that Sears continues to struggle; just take a trip to your nearest mall.

Within the northern city limits of Indianapolis, Castleton Square Mall used to be the region’s premier mall for big-name products. As suburbanization continues unabated, Castleton has lost some of its primacy to other lifestyle centers open in the northern suburbs nearby, but it still remains a largely successful retail hub, even as the abundant strip malls around it have seriously begun to shed tenants. The mall itself remains about 98% occupied, and during the Christmas season one could hardly tell that the nation is barely recovering from the most profound recession in anyone’s recent memory. Many of these pictures will look terrible; I had to take them on the sly from a cell phone’s 1-megapixel camera. But they still show Castleton in full bustle on a weekend night. 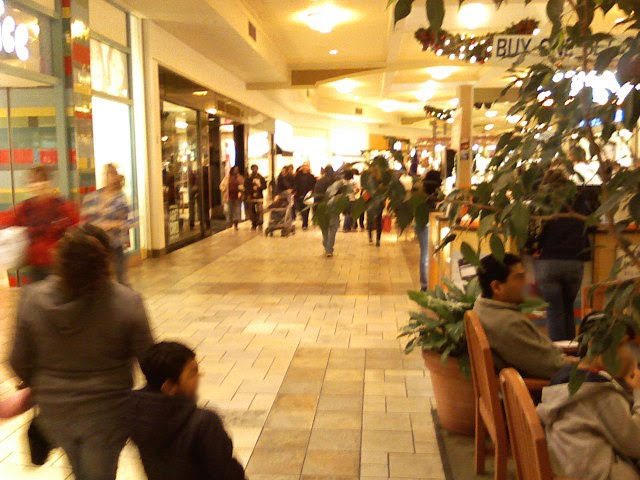 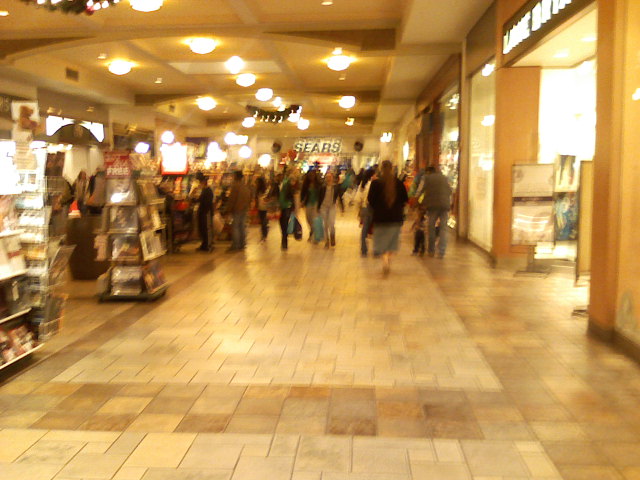 The mall assumes a more elaborate take on the dumbbell shape, in which a central hall of inline stores remains sandwiched by two large department stores on either end. In the case of Castleton, the central hallway boasts other department stores along the sides. In addition, one former department store in the south central portion of the mall, an L.S. Ayres, was demolished a few years ago and converted to an outdoor, lifestyle center model, with Borders Bookstore, a few restaurants, and a movie theater. Despite this minor “t-shape” configuration, the predominant structure of the mall is linear. Sears occupies the easternmost end of this long corridor. But the entire “Sears wing” has taken on a subtly different retail character than the rest of the mall. Walking down the wide passage toward Sears, one would at first see broadly familiar national chains, but that ends quickly after reaching these two stores. 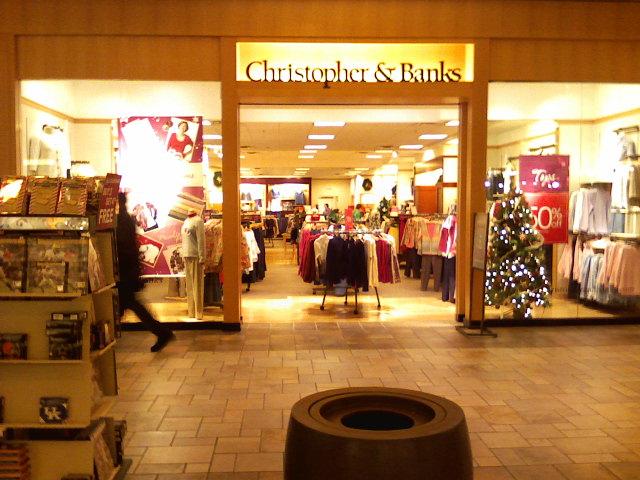 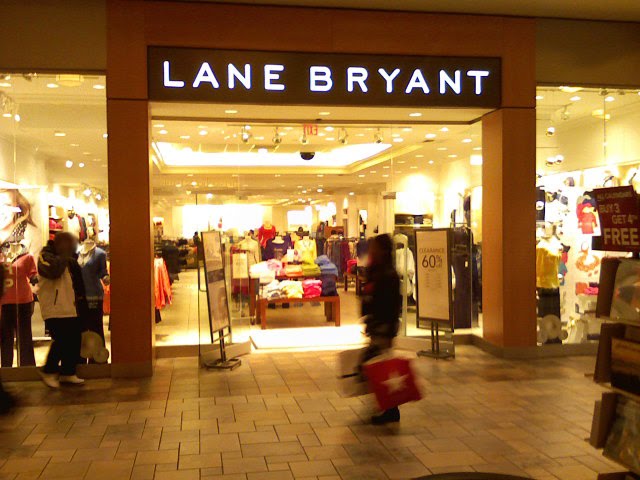 Christopher and Banks and Lane Bryant sit across the hall from one another, and they represent a sort of threshold for major retailers. Continuing down the hall toward Sears beyond this threshold are a different set of inline stores. 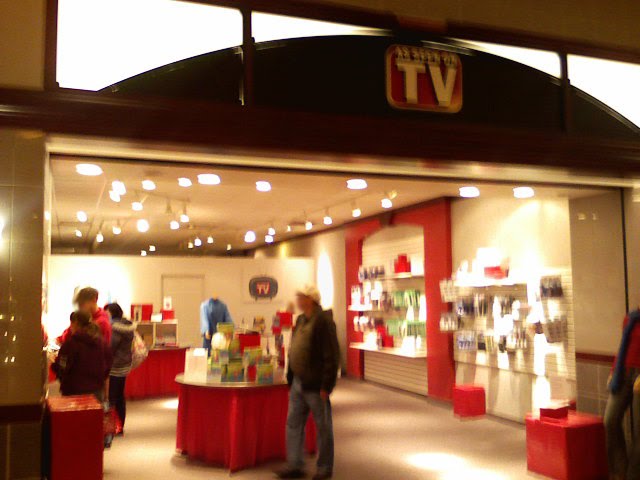 As Seen on TV is among the first. Is it a major national brand? They might have locations scattered across the country, but the interior does not show the markings of a committed tenant. Notice how little the tenant has improved the walls and floor and how closely it resembles a vacant store. In addition, the partition in the back of the store reveals that this retailer is only using about half of its total gross leasable area. Its diminutive sign costs little to install as well. Why would a tenant waste so much of its space and invest so little into an enticing interior? My suspicion is that As Seen of TV will depart the Castleton Square Mall quickly after sales decline, most likely when the holiday season is clearly over. It shows all the trappings of a pop-up store: here for a few months to capitalize on certain shopping surges, then disappears without a trace.

The low-rent signage continues as one walks closer to the Sears, with other retail curiosities that lack a national presence. 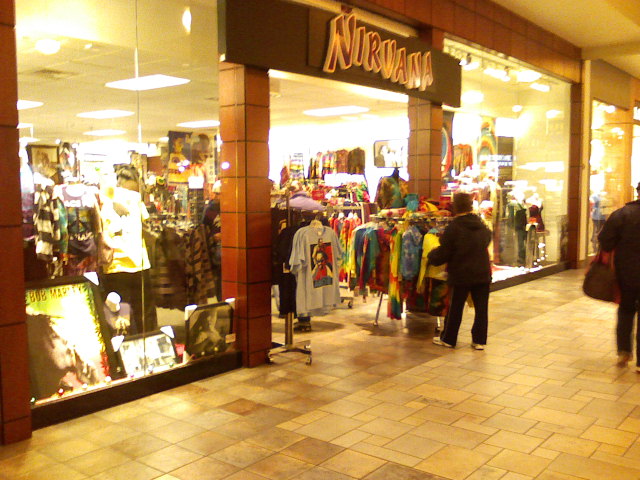 Nirvana, a hippie-themed apparel store, has lasted several years in multiple malls across the Indianapolis area, but it lacks a website—it’s clearly a home-grown chainlet. 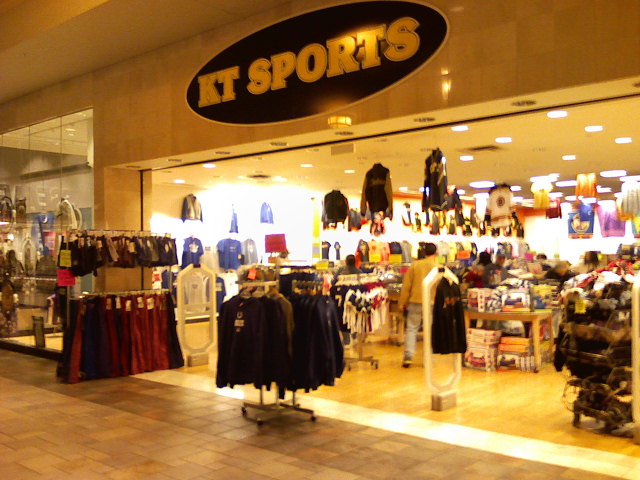 Moving one storefront closer towards Sears is KT Sports, a low-rent competitor to national, category killer sports themed megastores like Dick’s (which sits elsewhere in the Castleton Mall). The signage again is the best indicator that the store is hardly a national brand: a one-piece metal template is far cheaper than the individually carved letters of the Christopher and Banks. Immediately across the hall from it is another local apparel store, Unplugged. 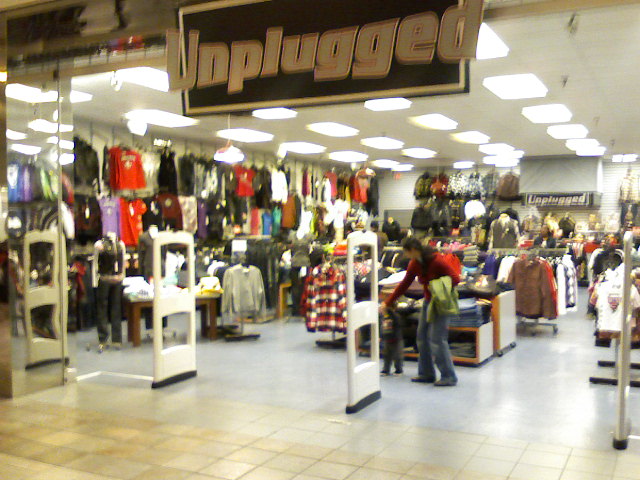 At this point the shopper is more or less at the entrance of Sears. Despite the activity generated by a harnessed trampoline attraction, the retail presence at what should be a hub—immediately fronting one of the main anchor tenants—is bleak. The wall to the immediate right of Sears is devoted to a series of candy vending machines. 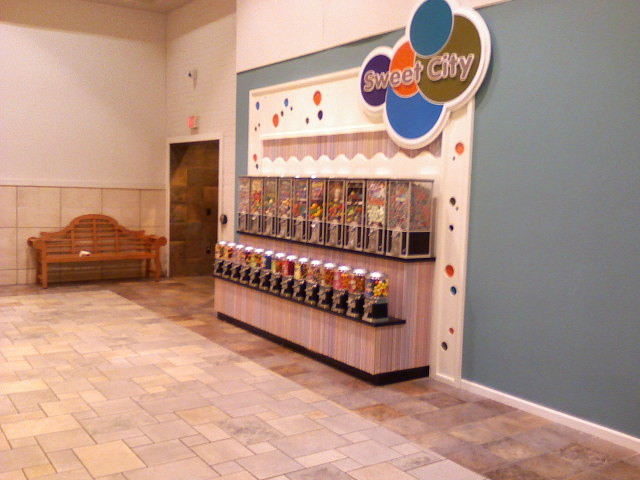 Stepping back, however, one can see that “SweetCity” is not just a confectionary corner; it’s a false front that disguises what otherwise would be a reasonably large tenant. 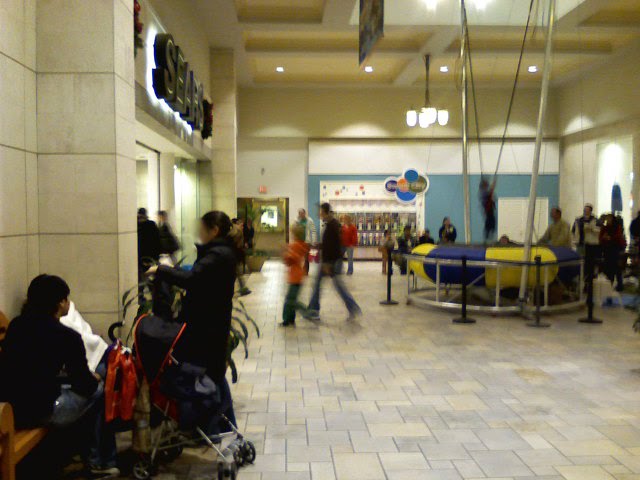 Simon Properties, the mall’s manager, has inserted a mild bit of commerce in what otherwise would be a completely dead corner. The storefronts to the left of the Sears entrance aren’t any better: 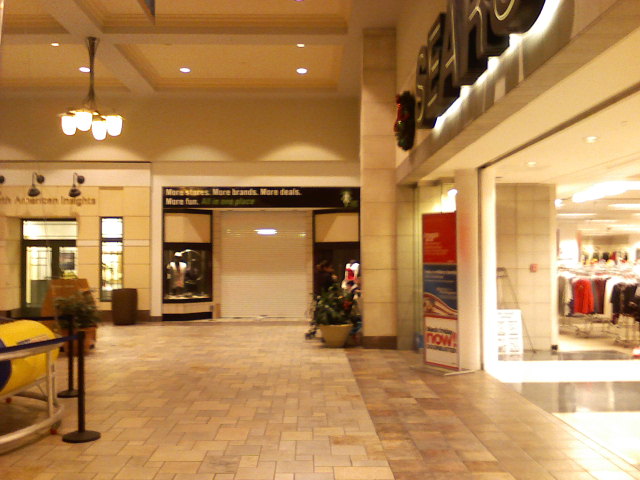 The left-hand tenant in this photo is North American Insights, LLC, a marketing research firm that poises itself “in high traffic malls with varied demographics.” This offers an excellent description for Castleton, which generally remains a heavily frequented mall, though its demographics have changed from affluent white shoppers to an extremely varied mix in recent years—offering predominantly upper-middle income retail offerings to a clientele that shows no evidence of any one clear cultural majority. But North American Insights is not a retail outlet in itself and is scarcely a generator of any new retail traffic. The storefront immediately to its right is vacant.

This “cul-de-sac” is the least active corner in the entire Castleton Square Mall, and the featured department store is Sears—hardly a compliment to a stalwart of American retail that it is unable to attract any national brands in its close proximity. Most market analysts will argue that the presence of “mom-and-pop” retail tenants in a mall is a clear indicator of the mall’s decline in popularity or market presence. However, the only section of Castleton lacking a concentration of national brands is the area around Sears. Elsewhere, the mall still hosts upper-moderate businesses such as Brookstone, Swarovski Crystal, and Ann Taylor LOFT. Is the Castleton Square Mall struggling or is it mostly a reflection that Sears is the least desirable corner? It’s obvious that the leasing system in malls correlates to a certain price per square foot, so a larger storefront will clearly pay more than a smaller one. But, like any commercial node, no mall property manager can expect to command rents at the periphery that compare to the core. Eager to fill these spaces in the mall where foot traffic is low, Simon Properties had to lower the price to the level that lower-tier tenants such as KT Sports and Nirvana can afford. Major brands turn their noses at this section of the mall and are perfectly willing to pay higher rents for premier locations.

A similar phenomenon has taken place at another mall far away, further demonstrating Sears’ widespread weakness at attracting people into its doors. The Cortana Mall in Baton Rouge had long been the dominant retail presence in the region since its opening in 1976 east of downtown, but the 1997 arrival of the Mall of Louisiana to the southeast, where most of the new development is taking place, quickly relegated the Cortana Mall to second-tier status. When I visited Cortana during the holiday season of 2005, it hardly showed sign of decline, with good crowds and generally solid occupancy levels—except for the area around Sears. The Cortana Mall failed to secure any tenants around the department store; one had to walk past about a dozen vacant inline stores to get to the fully-operative Sears. I haven’t been to Cortana Mall since then, but a quick trip to the blogosphere reveals that its popularity has only declined further: apparently some of the inline storefronts around Sears are now filled with non-traditional tenants like a post office and Army/Navy recruiting centers.

Castleton Square is nowhere near this level of “mall rot”—truthfully the mall’s occupancy levels outside of the area around Sears remain almost perfect, and even the area around Sears can at least find tenants. But the combination of a formerly pre-eminent mall and a faded department store may be too much for places like Castleton and Cortana. I can’t help but wonder if the presence of North American Insights, LLC is part of Simon Properties’ attempt to retain Castleton’s viability by having a marketing research firm as a permanent installation to track vulnerabilities in a mall with an exceptionally diverse demographic, in an era where malls, like public schools, frequently filter toward homogeneity. The legacy of dying and dead malls over the past 20 years has proven that Americans will easily bypass the mall down the street from them if it’s less active, ultimately driving tremendous distances to the mall with more energy, even if both centers have many of the same department stores and inline tenants. Castleton’s future is probably rosier than Sears, but in a time of prolonged economic uncertainty, retail centers have to capture the American consumer spirit that favors continued re-invention if they are to remain viable. As Michael Brush with MSN Money put it, Sears “the place Grandma shopped”. Property managers need to continue to tap into the market where young professional moms and dads with kids like to shop, and those folks are moving increasingly further from Castleton. Good luck to Simon Properties: at least they’ve proven far savvier at keeping a fresh image than Sears.

6 thoughts on “Retail’s softer side.”