Why pave over the past when you can just build around it?

Some places bury their development histories more discreetly than others. Demolition followed by new construction is the most effective way to relegate the built environment of the past to some weathered photographs stashed away in a vault at the state archives. At best, a historic marker may commemorate what once stood there. But it’s amazing how quickly those structures vanish from the collective memory. For example, Stamford differs from the other large cities in Connecticut (New Haven, Bridgeport, Hartford, Waterbury), because, with the exception of the historic district in the southern portion, its downtown hardly looks like a New England city. Thanks to its close proximity to New York City (just 30 miles to the southwest), Stamford has benefited as an alternative commercial hub for businesses seeking the New York market while taking advantage of lower office rents than Manhattan. Stamford underwent a far greater redevelopment in the 1960s and 1970s than its peer cities elsewhere in the state; the result is a city with a significantly greater number of contemporary office buildings than one might expect in this region.

Obviously other districts approach this dilemma differently, perhaps encouraging businesses to adaptively re-use historic structures or, as has been popular in the past, retaining only the façades of the original structures to preserve patina and ambience of an older commercial center, while a different structure, new floor space, massing, and radically different programming operates behind those deceptive architectural faces. But who is doing all this? Thus far I have struggled to incorporate a real noun, an agent to these initiatives. The fact remains that, with the exception of a small portion of the urban fabric across the country, there is no real instigator. While large urban redevelopments usually command a great deal of attention throughout the public approvals process—bringing together planning commissions, metropolitan development departments, conservationists, historic preservationists, affordable housing advocates, and a laundry list of other interest groups—the majority of projects happen without recognition. Virtually no one is thinking about them. A perfect example sits on a nondescript stretch of Madison Avenue on the Near Southside of Indianapolis: 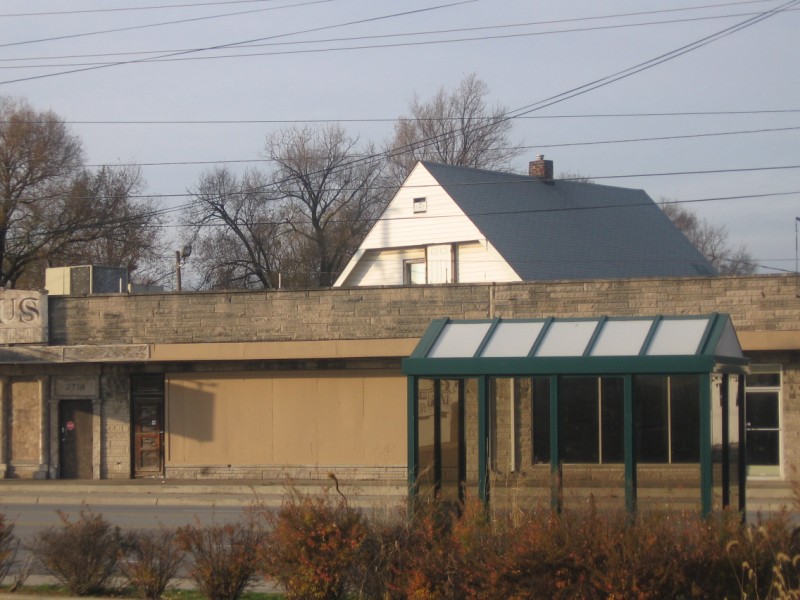 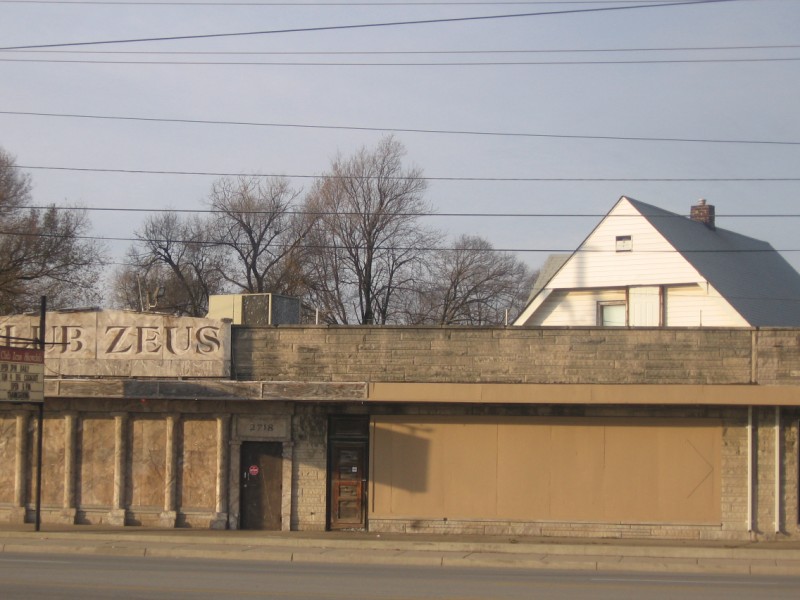 I had passed by this commercial building hundreds of times before I finally noticed what was going on: it looks like a squat commercial building has devoured an old house, judging from the gable that protrudes from the space directly to the right of Club Zeus. Without really knowing when or why this took place, I can at least speculate what happened and what Club Zeus reveals about the settlement patterns on this side of town. Unlike the north, west, and east sides of Indianapolis, the south side took off slowly during the peak of industrialization in the late 19th and early 20th century. As a result, the characteristics one typically associates with old cities—smaller lots, higher building density, pedestrian-scaled infrastructure, a relative scarcity of garages—unravel quite quickly to the south of downtown and the principal character becomes automobile-oriented, suburban, and at times even rural.

This photo, taken just south of the intersection of Madison and Southern Avenues, approximates the southern boundary of the historic city, prior to the consolidation of the city limits with the surrounding Marion County boundaries during the Unigov initiative of 1970. Despite the fact that it is only 2.5 miles from the exact center of downtown, only a handful of structures around here have immediate street frontage such as the one in the photo; just a quarter of a mile away to the southwest are homes with spacious front yards one might only expect to see in the outer reaches of a major city, at least a dozen miles away from the city center. Many of the development patterns show evidence of having transpired with none of the government supervision one would expect in an incorporated city. Directly across the street from this strange building with Club Zeus is a very suburban K-Mart with a sea of parking out front.

Though Madison Avenue has long been a primary southbound arterial out of the city, the city’s southerly urban growth has subsumed what was at one time a mostly rural highway. The gabled roof with its lonely window and chimney comprise the visible portion of what I suspect was an old wooden farmhouse, possibly dating over 100 years. And the squat commercial structure? A nighttime photo of the back reveals that it wraps tightly around the home on three sides, forming a U shape. 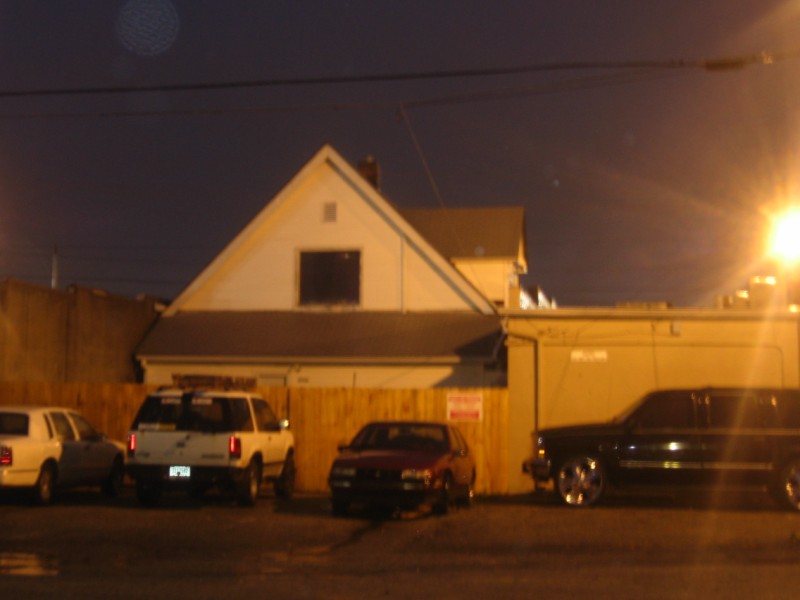 My guess is that the building that houses Club Zeus is at least fifty years old, if not more; the most revealing clue is the fact that it was built out to the street, without parking in front, clearly dating the structure from a time when that was still a visible commercial building typology. By the 1960s, when nearly every Midwestern household owned at least one car, a commercial structure such as this would have included plainly visible off-street parking, usually between the building and the sidewalk. (In this instance, it appears that the north side of the structure offers a handful of parking spaces.) I can only speculate that owner of the house with the protruding roofline sold the property over half a century ago. The new owner, recognizing Madison Avenue’s growing importance as a commercial corridor leading out of the old city limits, decided to build a retail structure. However, rather than demolishing the old home and rebuilding, the new owner decided to build around the old house, perhaps creating an eccentric live-work hybrid. But how many people are going to want to live in a house where the first floor, with Club Zeus, has no light exposure on three sides? What about alternative escapes from the house in the event of a fire?

Zoning and permitting regulations would have probably prohibited this bit of construction if it had rested within the city limits of Indianapolis. Although it is possible that this site may have rested within the city limits in the late 1960s, immediately prior to the Unigov of 1970, it most likely was unincorporated MarionCounty in the 1950s, the decade in which I suspect this transformation took place. Thus, this humble southside oddity survives as a whimsical vestige of a part of the city that endured urban pressures even as the growth pushed beyond the city boundaries, into the unincorporated Marion County of little regulation. It embodies the collision of the urban edge, the suburban, and the rural, and its survival stands a testament to the absence of government oversight. If anyone stopped to question its viability when the property fell under the city’s jurisdiction, no doubt authorities allowed it to be grandfathered in. It wasn’t worth an argument. Should this have been allowed, or should the home have been bulldozed to make way for the commercial building? No one has ever tried to assert that this section of the near Southside is a historic district, but this old home survives nonetheless as a subtle indicator of Madison Avenue’s rural history. If it had to meet the permitting approval of the City of Indianapolis, the regulatory broom and dustpan would have eliminated it completely. Most likely no one would have cared (even today few people probably notice). But, amidst K-Marts, used car dealerships, and drive-thru fast food stops, in an area too mundane ever to warrant a historic marker, an old farmhouse offers a momentary pause to glance upon city’s generally unprotested, continual evolutionary process.

6 thoughts on “Why pave over the past when you can just build around it?”