When visiting or even passing through small towns, it’s normal to gravitate toward the business district in order to determine what a town is “like” in the most generalizable sense.  In many cases, the preponderance of commercial activity in these towns, particularly those larger than 2,000 people, takes place at a bulwark of big box stores along the four-lane or six-lane highway that circumscribes the community on one side.  (Towns that surpass 5,000 persons generally boast sufficient buying power to justify a Wal-Mart among them.) While the easy availability of automobile-oriented convenience shopping that these structures provide often deters people—both locals and visitors—from seeking the goods and services the downtown has to offer, the original core of the city usually remains the heart of a town’s identity, its visible essence.  In communities under 5,000 persons, this core often entails little more than one or two contiguous, linear blocks of faded Italianate commercial buildings, often with gaps between party walls where other buildings once stood and have since been demolished.  Any meanderer across the American countryside that is seeking more than the Wal-Marts on the fringe will soon develop an intuitive sense of where that main street lies within a given town.  Look for the old church steeples, perhaps the clock tower of a county courthouse, or, in even the tiniest villages, find that railroad track and observe the architecture that fronts it—perhaps the old depot and a warehouse still survive.

The aforementioned commercial clusters along the outlying highways have inevitably introduced a new layer of competition to the business districts of these small towns, just as suburban shopping malls did the same to the downtowns of larger cities.  However, even in villages too small to justify a Wal-Mart, Home Depot, or even a conventional full-sized supermarket, the original commercial core—sometimes little more than the depot and a cluster of brick buildings—has suffered, as these aging structures fail to accommodate retail with the ease and capacity of windowless cement titans along the highway: logistically, the big box stores are better for unloading trucks; they accommodate mass distribution and storage more readily; they are more secure and protective for the merchandise; they offer more parking for consumers.  Those commercial buildings, often at least a century old, simply couldn’t compete.  The most nationally visible effort to save the central districts of smaller town is the Main Street Center under the National Trust for Historic Preservation, under which nearly all states have coordinated programs; at this date, only Alaska, Hawaii, Idaho, Minnesota, Nevada, Utah, and the Dakotas lack them, while many states have dozens of communities enlisted. The capital city of Dover, is among them—the Downtown Dover Partnership protects historic Loockerman Street, seen below: 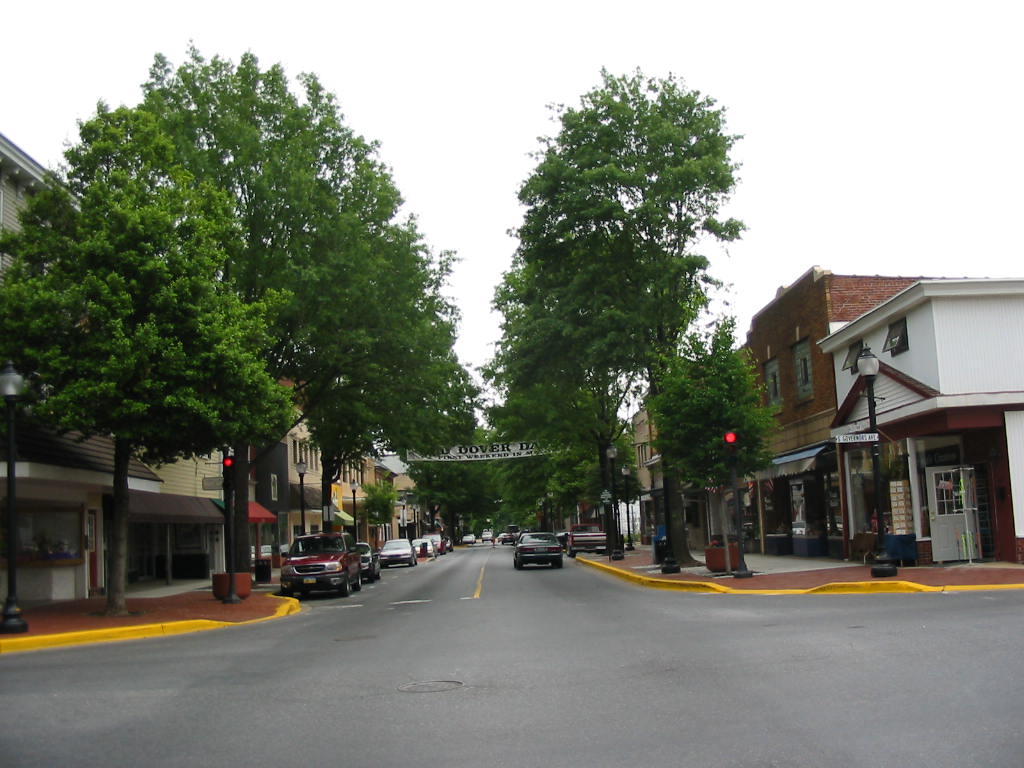 That a Main Street Association exists in Dover to promote, preserve, and help beautify the city’s downtown is hardly remarkable; what’s surprising that an organization with the geographic scope of a Main Street Association is all it takes.  Dover is hardly a big city.  But a community with population of 35,811 (according to the 2007 estimates by the US Census Bureau) would typically have a downtown business district of at least four to six full blocks with an intersection as its focal point—the absolute center, where all address numbering begins.  Dover has the same three-block-long commercial district (in the form of Loockerman Street) one would expect to see in a town of 4,000 persons.  The Downtown Dover Partnership tries to incorporate a broader geography into its outreach and promotional initiatives, including businesses on several of the surrounding blocks.  But the real center of town—the essence—remains those blocks on Loockerman Street, where the street beautification efforts of the Partnership are evident. 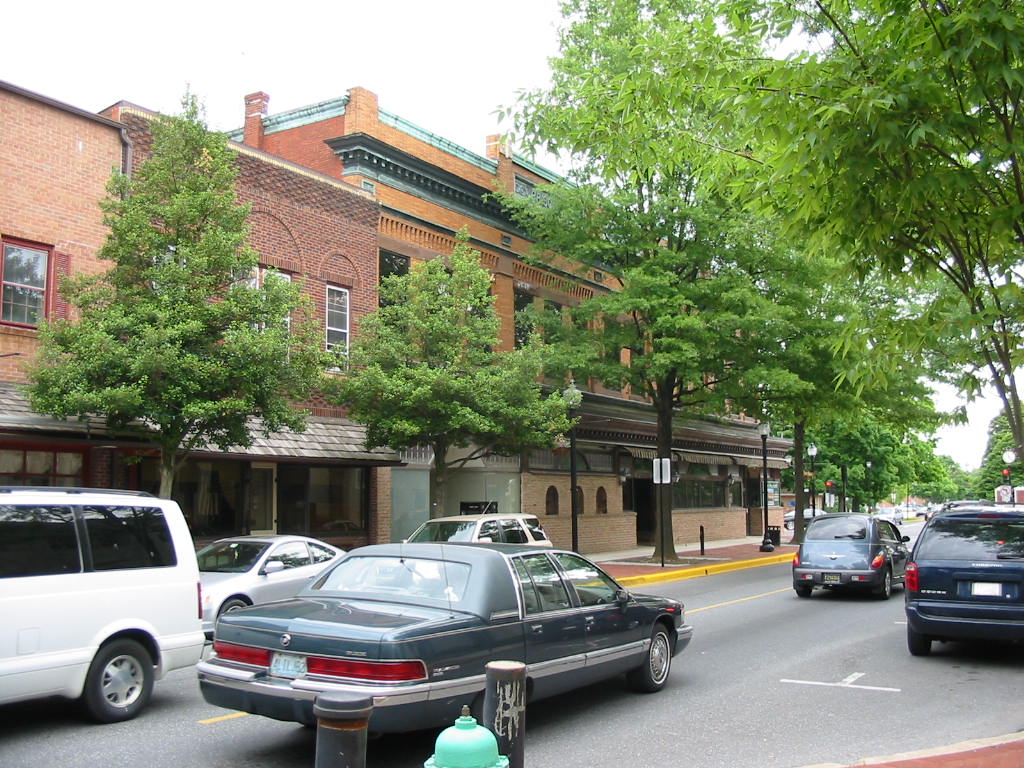 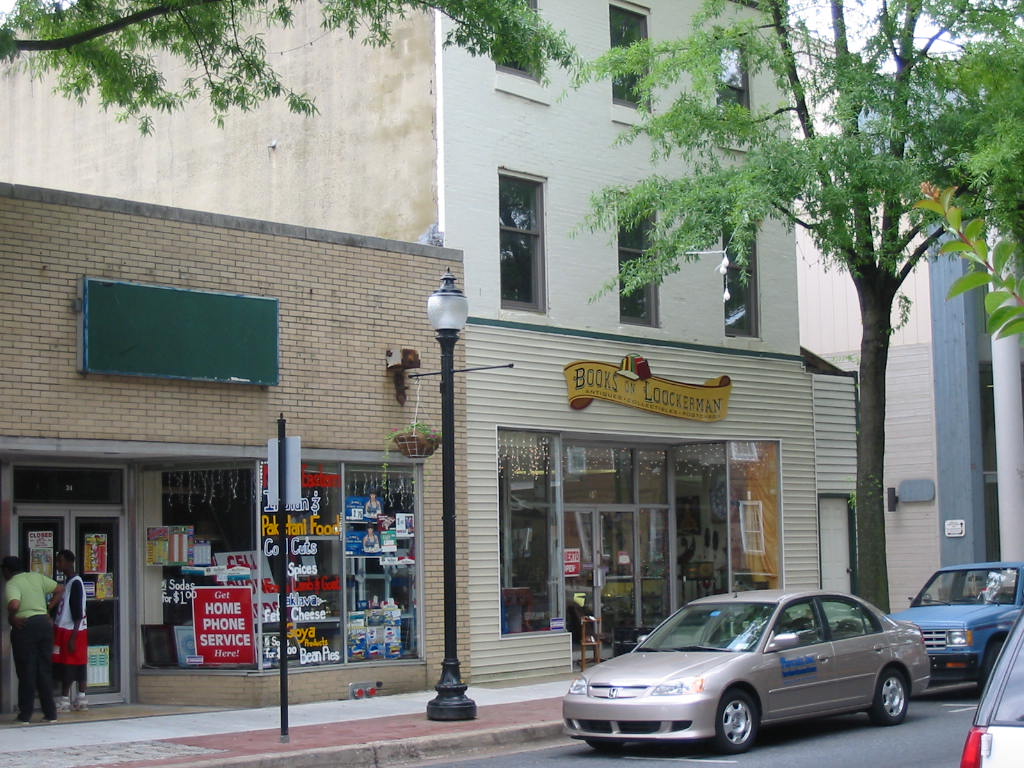 The result is a well-kept if not hugely active main street, at least based on these photographs from 2004, which may prove dated.  My research through the Downtown Dover Partnership suggests a bit more activity five years later, but retail health is not really the point of this analysis.  The curiosity is the scale of what comprises downtown, or what should comprise it in a state capital.  Below is a map of central Dover, with the commercial core of Loockerman Street circled. 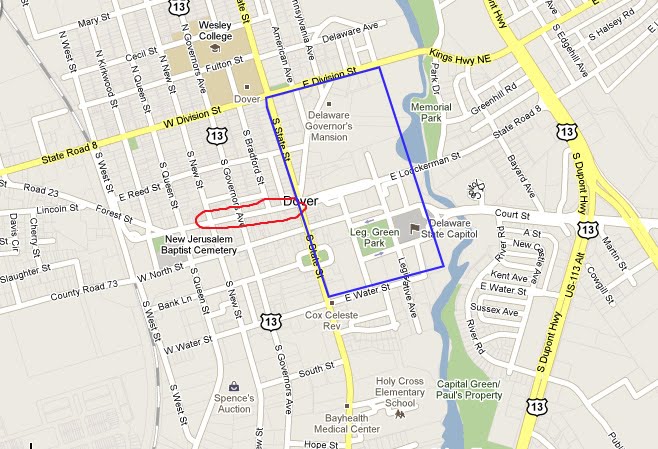 Perhaps the main street was longer in the past, as this Depression-era photo available at the State website suggests, but the density of buildings drops considerably to both the north and south of Loockerman, featuring many free standing structures serviced by parking lots.  I’m not trying to dismiss Dover’s historic integrity; much of the area outlined in blue on the map comprises the “capitol complex”, with the statehouse, governor’s mansion, a rectangular town green, and a number of intact Federalist residential structures, a few of which house law and accounting offices.  Loockerman isn’t necessarily a linear island surrounding by parking lots, and the east of the main street provides a contiguous sense of what might have been the “original” Dover, as seen below, culminating with the statehouse: 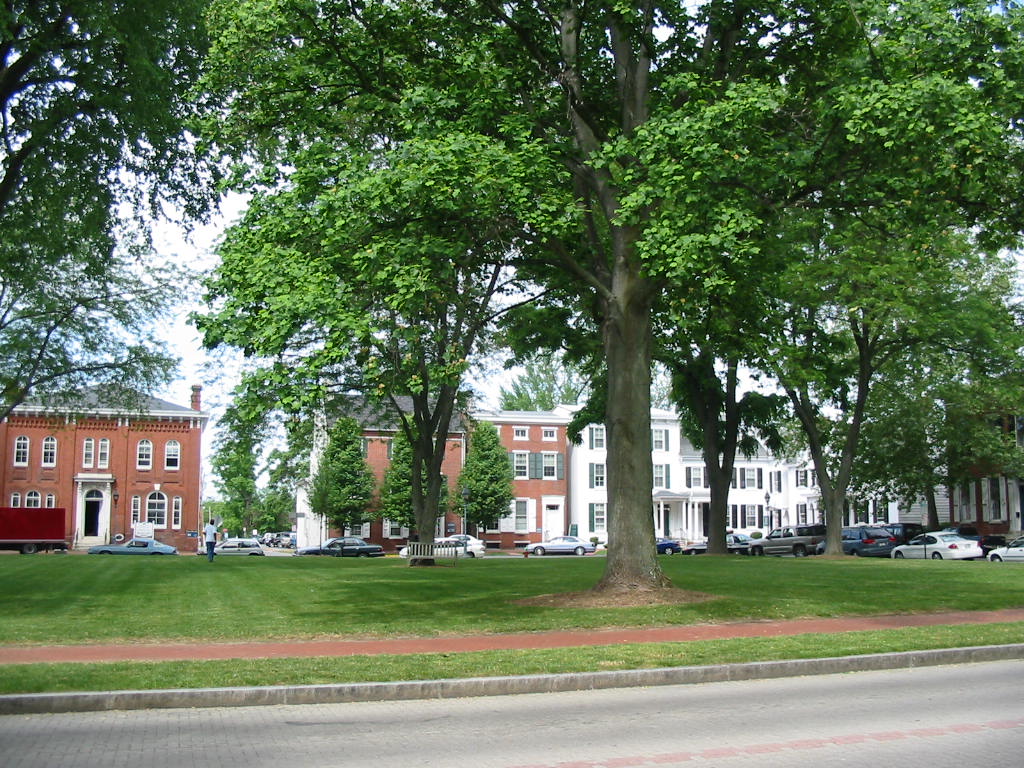 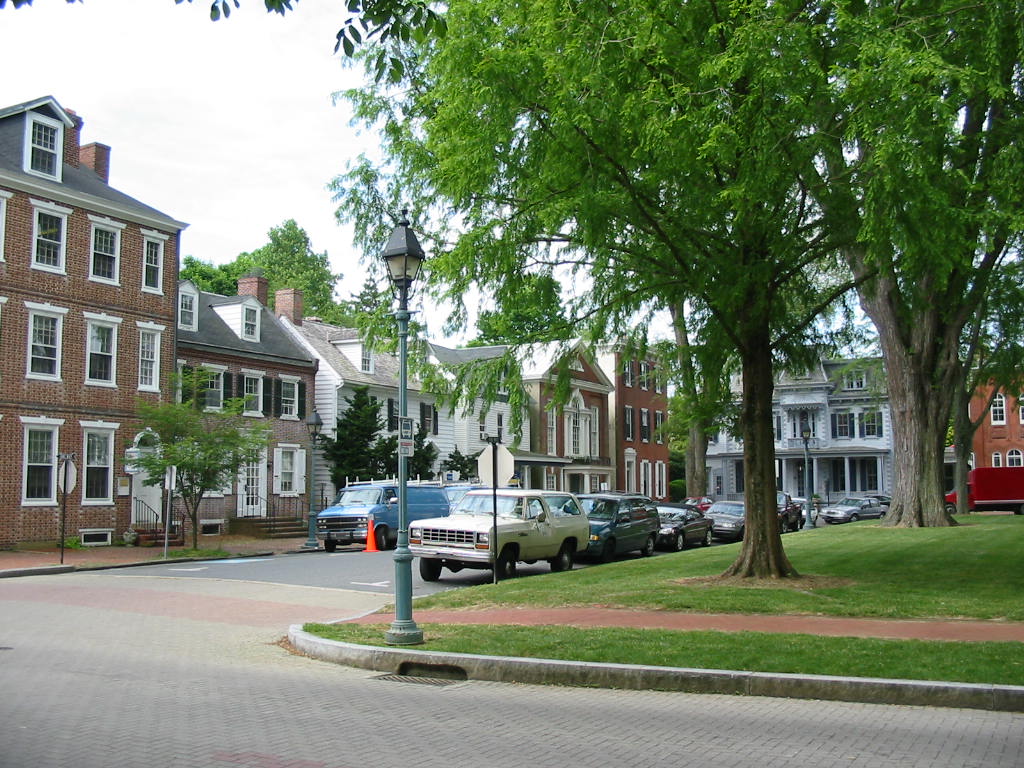 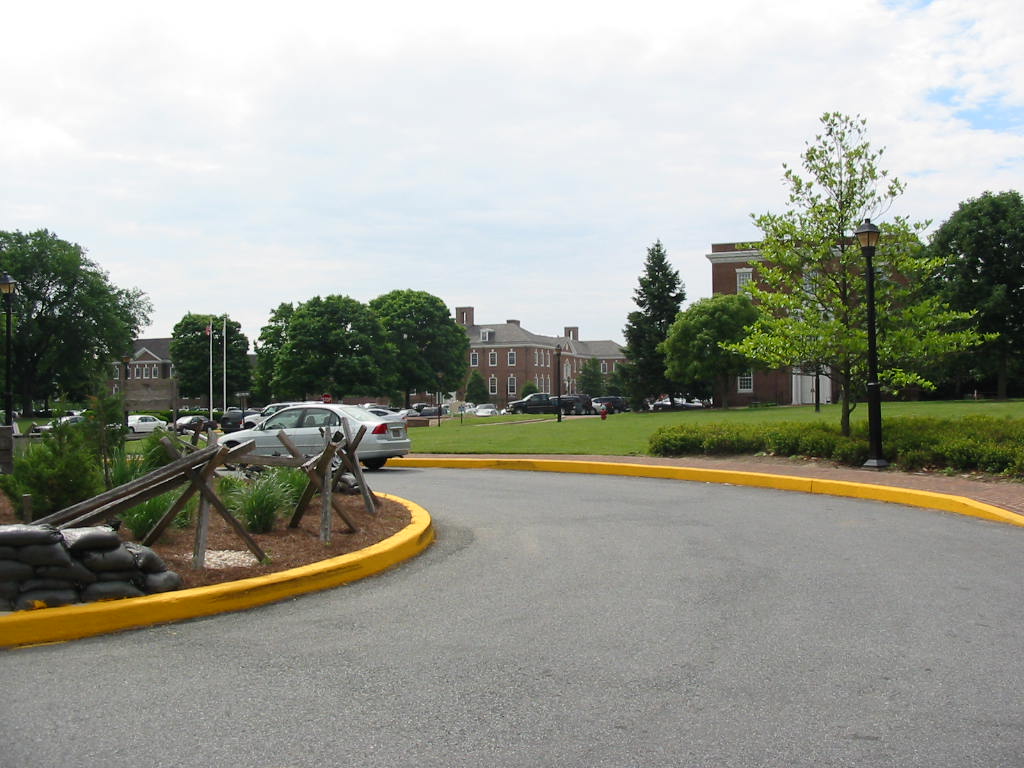 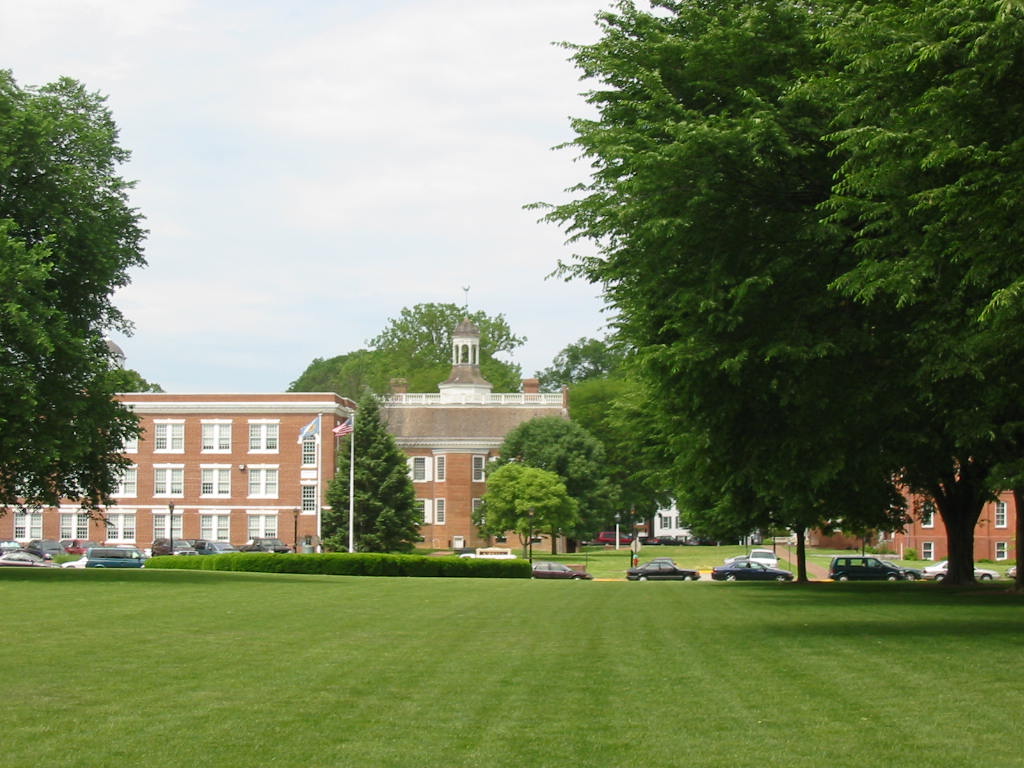 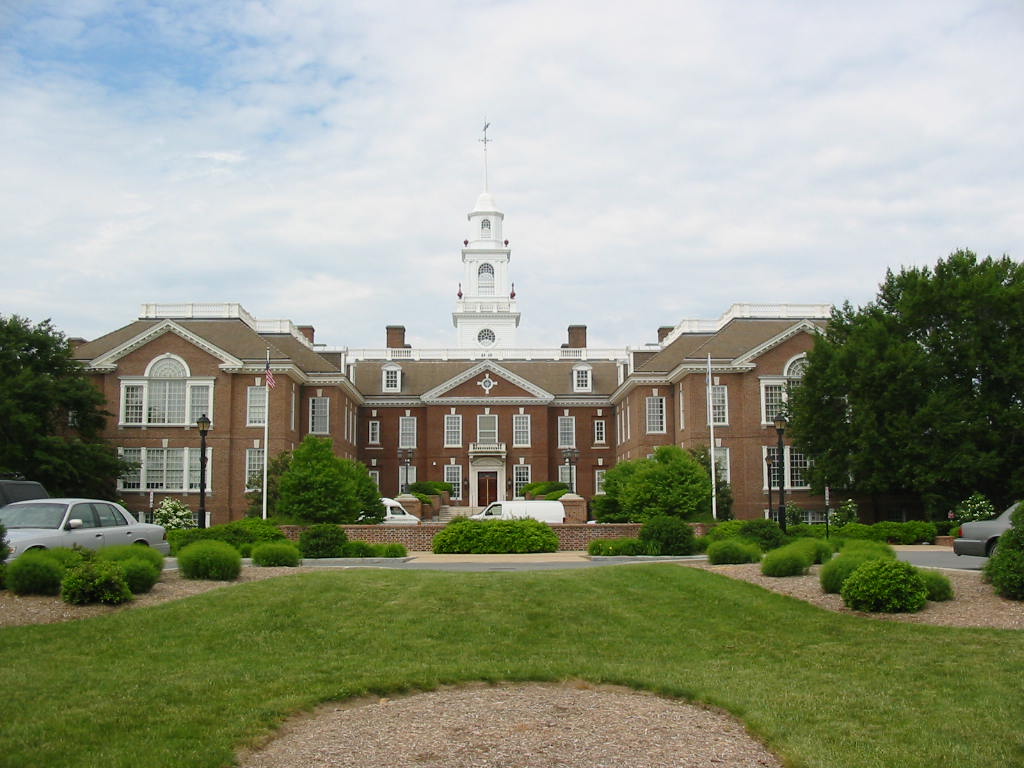 It has the verdure and architectural consistency of a college campus, as well as the sense of centralized planning.  Nothing wrong with this, but it dwarfs the commercial heart of Loockerman Street in size, and fails to generate the sort of activity one would hope through its proximity to the main street, certainly compared to the 1929 photo.  And I took these pictures around lunchtime on a weekday. Clearly not bustling.  As small as the City of Dover may seem, it’s hardly the smallest state capital: Alaska, Maine, and South Dakota, are all smaller, while Vermont’s capital is the smallest in the nation, at less than 10,000 people.  Yet Montpelier, VT still has a bigger and more robust commercial core than Dover.

The explanation for why the City of Dover overpowers its central business district is simple: Dover has only been a big city of 35,000 in recent years.

Maybe some of the growth of Dover is attributable to municipal annexation, but I find no evidence of it.  And the surrounding Kent County is growing at just as fast of a pace, so clearly its a regional phenomenon. Such a growth pattern would seem unremarkable in the Sun Belt or the far West, but for a state in the Mid-Atlantic that hosts some of the earliest colonial settlements (the First State, no less), it shows an uncharacteristic consistency and robustness in growth.Delaware as a whole is atypical of the states in the northeastern seaboard for being fast growing; the majority of cities in other Mid-Atlantic states such as New Jersey, Maryland, and particularly Pennsylvania and New York are static or shrinking.Whereas Philadelphia, Baltimore, Newark, Camden, Washington DC, and Delaware’s largest city Wilmington all grew at a steady clip until the decline of manufacturing in the 1950s, Dover started as mere village whose only significant role was the head of state government.  After the 1950s, the aforementioned Mid-Atlantic manufacturing powerhouses hemorrhaged jobs and population plunged; not one of these cities has recovered its population peaks of fifty years ago.  Conversely, Dover started tiny and has grown 900% over the past century.

The city’s anomalous growth this echoes the curious positioning of the state of Delaware within the larger conurbation that stretches from Washington DC all the way up to Boston, made famous under the label “megalopolis” by French geographer Jean Gottman. The map below from I-95 Highway.com is a bit busy for my taste, but it effectively shows where Delaware and Dover fit into the network.

Wilmington and its suburbs, at the far north of the state, fit into the I-95 corridor which by many measurements forms the vertebra of Megalopolis.  To the northeast is Philadelphia; the southwest is Baltimore.  Any visitor to Wilmington will tell you it has the architectural look, the density, the hilly topography, and the pace of the Northeast and clearly identifies itself as such.  Yet, after less than an hour’s drive south in this tiny state, the hills disappear and soon one is in Dover, which moves and operates every bit like a quiet southern capital. The shift is hardly gradual; everything changes south of Wilmington after crossing the Chesapeake and Delaware Canal, and visitors find themselves in the coastal plains of Lower “Slower” Delaware.  Residents of the area tell me that the Delmarva Peninsula on which parts of Delaware, Maryland and Virginia rest, with the Atlantic Ocean on the east and the Chesapeake Bay on the west, completely bypassed the Industrial Revolution.  The area only began to take off after the 1952 construction of the Chesapeake BayBridge, providing a link to the populous Washington/Baltimore side of the Bay over to the largely isolated Peninsula.  Ever since, the beaches of southern Delaware and the Maryland shore have become incredibly popular as weekend destinations; Delaware ranks among the top states for its concentration of vacation homes.

The unlikely phenomenon of a fast growing municipality in a region whose growth levels are much more modest (the booming Washington DC suburbs excepted) leaves Dover as a city where the downtown foot is far too small for the municipal boundary shoe.  This isn’t a problem per se, but it leaves the visible result of a 35,000-person city with a tiny 3,500-person main street. Such a scenario is fairly common in the booming suburbs of Phoenix or Las Vegas in the west, but it is an odd site here in a centrally located member of the thirteen original colonies. Loockerman Street is a perfectly respectable corridor, sleepy but hardly vacant.  My suspicion, though, is as Dover shows all evidence of continued growth in the foreseeable future, city leaders are most likely attempting to reaffirm the role the state capital plays as a primary employer and how any activity from those facilities might spill over onto Loockerman as the main street. Dover’s modus operandi up to this point has been decentralization akin to the Sun Belt, but, as the state precariously balances its business friendly northeastern alignment in Wilmington with its laid-back southern heritage, it will no doubt hope to concentrate more commercial and residential energy in Dover’s miniscule downtown.  It is, after all, the first post-revolutionary capital to the First State.

PrevFueling our appetite to push away from the center.
Mystery kitchens.Next