While few American locales outside of New Orleans are famous for their cuisine—a whole family of entrees and specialties derived from local foods—many cities boast a signature item or two. The Midwest, suffering an undeserved reputation as a culinary underperformer, has more than its share of regional specialties, some of which are more high-profile than others. Of course most people are well familiar with Chicago’s deep dish pizza or its ketchup-free hot dogs. Buffalo, though somewhat straddling both Midwest and East Coast, has achieved dozens of national imitators purveying its signature hot wings. Kansas City offers the most northerly variation of beloved barbecue. Other food traditions, however, are a bit quieter. Only in recent years has Cincinnati’s chili heritage become popularly known thanks to the Skyline chain (I concede I didn’t learn about it until several years ago); Louisville’s hot browns are rarely seen outside of the bluegrass state but still treasured in the city; every signature bar in Indianapolis is expected to sell a breaded pork tenderloin sandwich (more of a rural tradition made urban); and Buffalo’s other contribution, the beef on weck, has never really caught on elsewhere. No doubt I’m forgetting quite a few traditions in other Midwestern cities, but this restaurant sign in a rough-and-tumble part of Indianapolis left me scratching my head: 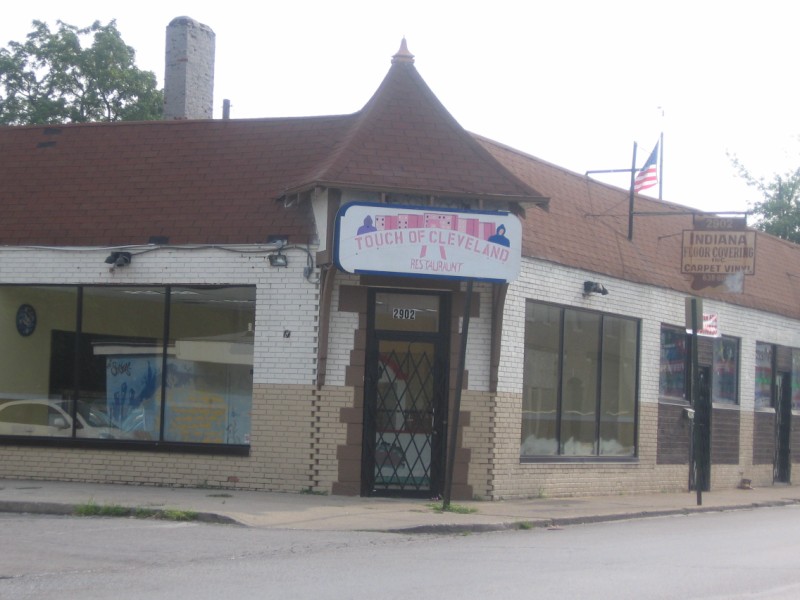 Any ideas? I’ve only been to Cleveland briefly, so I’m no expert. But an entire restaurant devoted to the city without specifying the food suggests to me more than just a sandwich. Is there a Cleveland cuisine? Apparently it failed to evoke much to its targeted clientele either; the restaurant is shuttered, perhaps years ago. I don’t mean to underestimate Cleveland, but it would be far easier to reference a place if it were known indisputably for a particular food. I’m not sure Cleveland cuisine has achieved such a level of branding.

Contrast this with another food seller that recently opened in another, less rough but still chancey part of Indianapolis: a “Taste of Philly” at the intersection of 42nd and College. The signage at this storefront automatically wins; it informs the passers-by that it sells pretzels, which is a food tradition far less associated with Philly than its cheesesteaks but just as embedded in the culture. Though it appears to be a franchise, I can assure anyone in Indianapolis who is bewildered by the squashed look of the Philadelphia pretzel that this humble seller is the genuine article—great spicy mustard too.

Referencing a place name in a business will always prove a challenge if it fails to elicit any clear associations—it’s much the same hurdle an ethnic eatery faces when its food is new or unfamiliar. In many cities, this is why some of the best exotic cuisine can be found in struggling retail corridors, such as the strip malls in inner-ring suburbs. (It doesn’t hurt that the housing costs in these areas is often cheaper as well, offering the combination of affordable residential and commercial that attracts immigrant communities.) A new Indonesian restaurant—the first of its kind in Indianapolis—opened recently at 46th and College. This location appears to be a shrewd decision on the part of its owner, because the area is relatively close to the fashionable Broad Ripple neighborhood, yet it is far enough—and in a less prosperous area—to most likely demand considerably lower rents. It’s way too soon to determine if the Indonesian restaurant will make it, but it benefits from high visibility near a yuppie neighborhood where the sort of adventuresome demographic is likely to see it, while lower operating costs should give it a buffer of risk management.

The same cannot be said of the failed Touch of Cleveland. Maybe the location in a generally low-income area was bad, maybe the idea of Cleveland cuisine didn’t ring a bell or even arouse any curiosity, maybe the lack of an illustration of the signature entrée on the sign led to its demise. Maybe Cleveland’s own widely publicized economic woes could be ever so slightly mitigated if the city was better at galvanizing its own identity to the point that the rest of the country was aware of its great food offerings. All of these speculations are most likely flights of fancy, and Touch of Cleveland could just as easily have been badly managed and offered mediocre food. But even when its origins are modest, a locational identity that clicks and forms an easily translatable brand no doubt provides the best narrative for understanding the success of the Chicago hot dog, Buffalo wings, and Cincinnati chili.