Ambiance can be bought through a few seeds.

While I’ve borrowed other people’s pictures in the past as a basis for analysis, this may be the first time in which the revelation itself is not my own. I had been living in New Orleans for six months at the time a friend came down to visit. After spending the first night in the city, we followed on the second day by exploring the wetlands in the surrounding area, at which point the friend concluded: “Palm trees aren’t native to Louisiana, are they?” My immediate response was no, even though I had no proof—I had never read a study indicating one way or another about the origins of the palm family along the Gulf Coast. But I could answer without a moment’s thought because this friend made a simple observation that all this time had escaped me.

Arriving by plane, as soon as one departs the New Orleans Louis Armstrong International Airport, there are varieties from the palm family everywhere—the grounds of the airport are replete with them. Along some of the city’s grander boulevards, palms line the neutral ground (New Orleans for “median”) or stand sentinel at perfect intervals along the periphery. As seen in this remarkable rare instance of a snow shower along Canal Street, they function as street trees.

Though New Orleans may be among the most southerly locations in Louisiana, palms can thrive elsewhere in the state. Baton Rouge may only be 75 miles to the west (and slightly north), but it offers a notably different ecosystem and is well above sea level with a moderately rolling topography. (New Orleans to the untrained eye is completely flat.) Nonetheless, various members of the family Palmae are commonplace features in Arsenal Park, the lush grounds surrounding the state’s famous high-rise capitol building, courtesy of governor Huey Long. 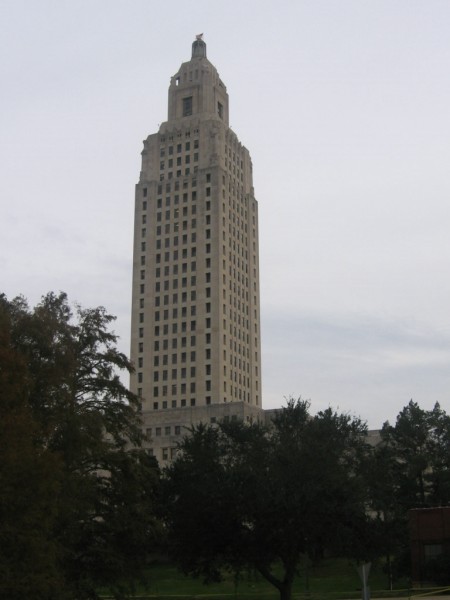 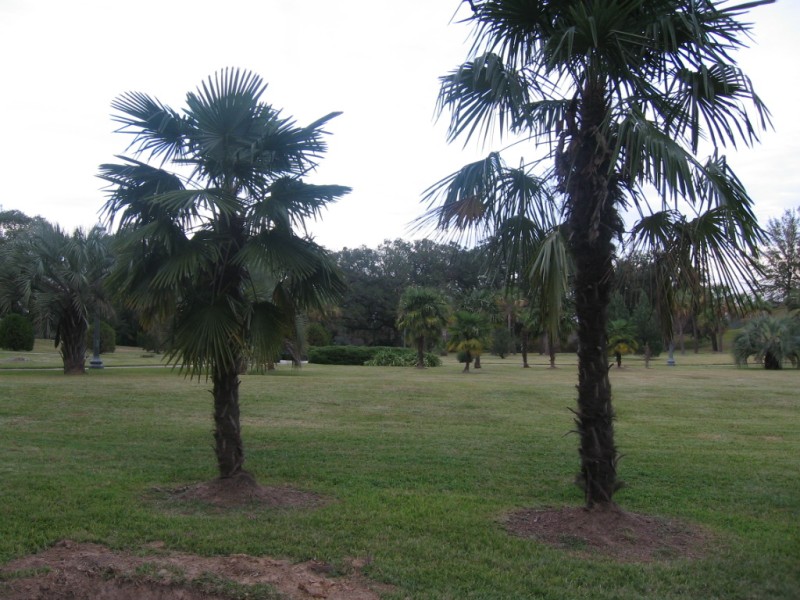 Not surprisingly, palms in South Louisiana aren’t limited to grand public lawns or rights-of-way; numerous households have adopted them as trees in front lawns, as seen below in New Orleans in May: 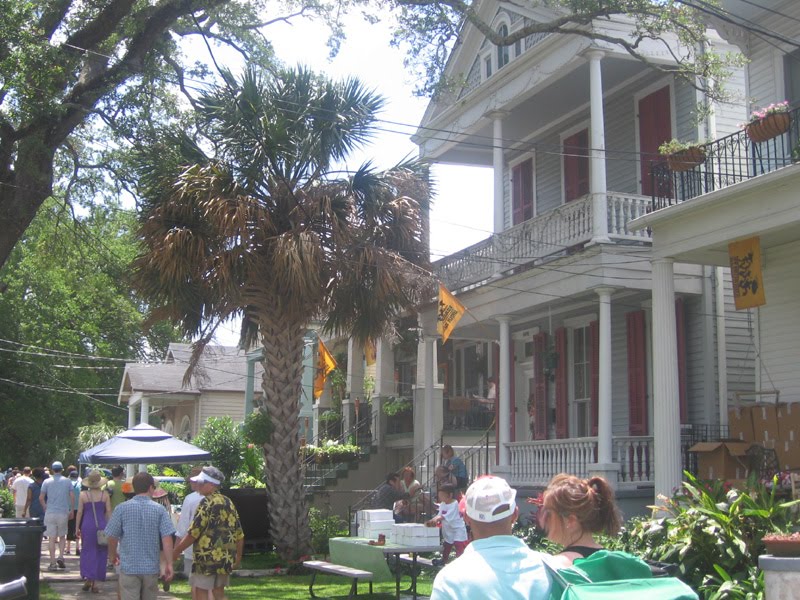 As evergreens, palms during this St. Patrick’s Day parade retain their leaves. 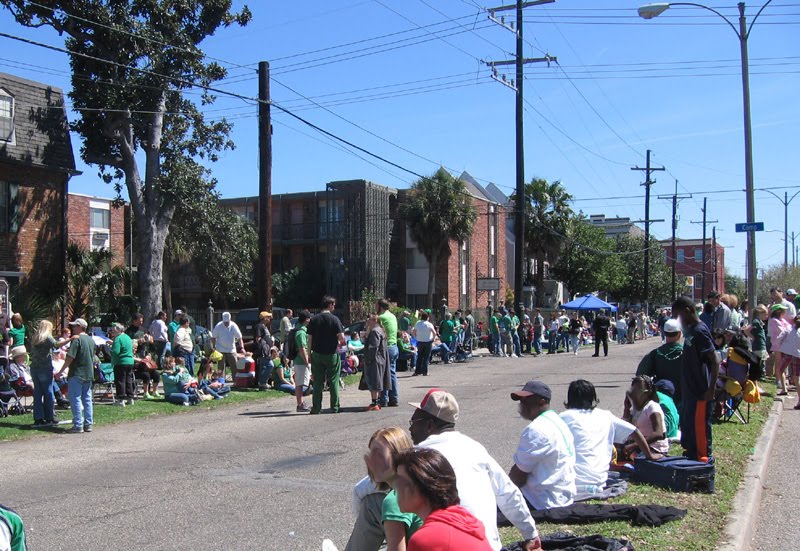 Compare this to the deciduous trees of the area, such as the crepe myrtle, which are just starting to spout their blossoms and young leaves at this time. 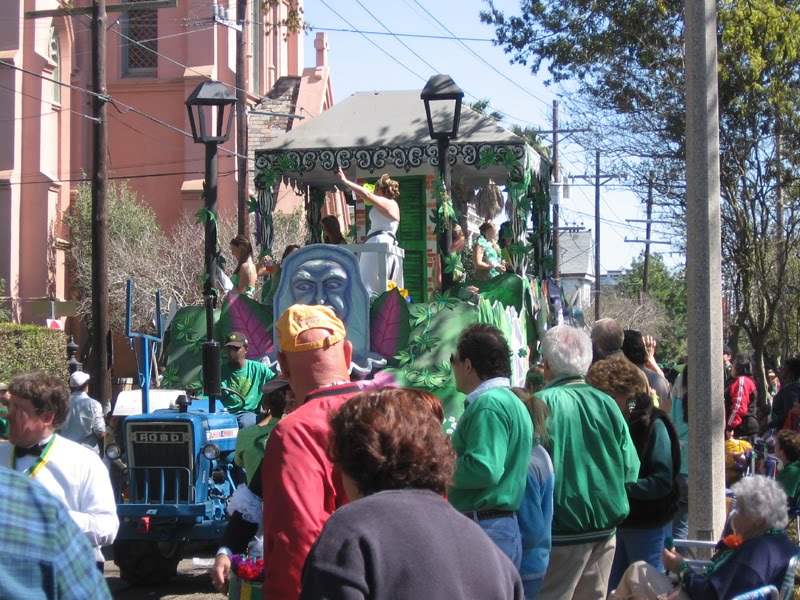 Palm trees, at least the genera that flourish in Louisiana, provide little shade from the sweltering Louisiana heat. Many species are high-maintenance, with considerable susceptibility to malnutrition, vitamin deficiency, or pest infestation. Particularly tall palms are vulnerable to lightning strikes. The dramatic fiery backdrop in the photo below only serves to emphasize these palms’ height in comparison to neighboring trees. 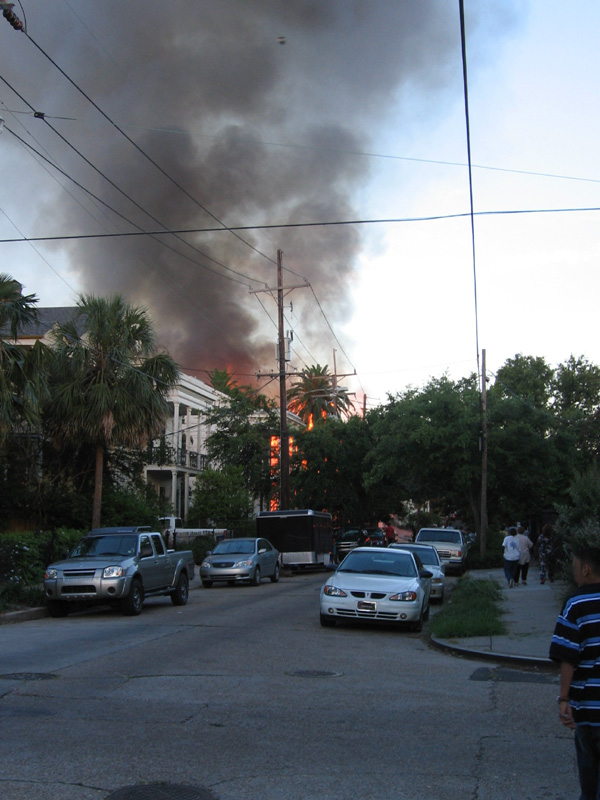 A quick scan of the landscape upon landing in a city like New Orleans should easily reveal that the majority of trees in south Louisiana are not particularly tall. Compare the palm with the mighty live oaks, featured in an earlier blog post, with a canopy that puts that of the palms to shame. But live oaks earn all their majesty from their breadth, because they’re quite short; they have adapted evolutionarily to the region’s high propensity for hurricanes by keeping their center of gravity low. Palm trees have evolved to resist storms as well; the long trunk and narrow fronds do not provide a high profile for wind shear. And of course, palms are omnipresent along tropical shorelines. But the gulf coast of Louisiana is almost completely devoid of beaches; nearly all of it are consists of wetlands that have been rapidly eroding in recent decades.

Do these pieces add up yet? A quick trip to some of the swamps outside of New Orleans should reveal why I could definitively answer my friend’s question with “no”, without hesitation. 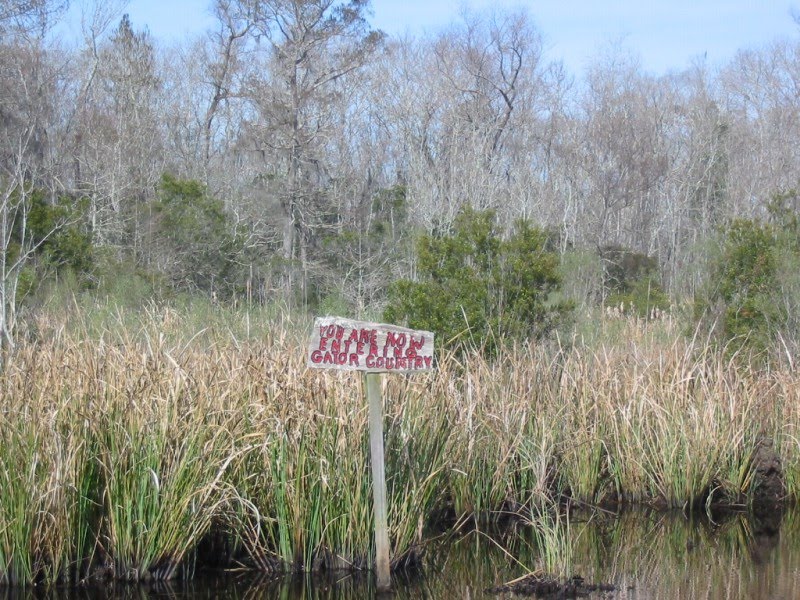 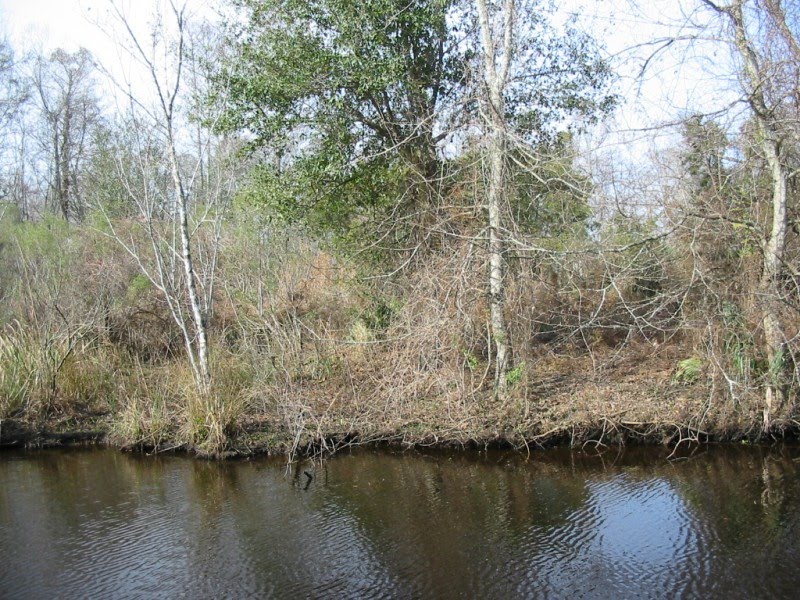 Here in the swamps south of the city, near Crown Point, Louisiana, palms are nowhere to be seen. Though frequently privately owned, many of the commercial wetlands attempt to offer tourists an authentic exposure to a cypress swamp; the land is also frequently used for hunting and fishing. Taken in January, these photos show the predominance of deciduous trees in what could be considered “real” Louisiana. From the photos above, it almost looks like it could be January in the Midwest.

A photo elsewhere down this waterway (it was a canal, much as I’d like to say it was a bayou) shows a little bit more verdure than one would ever encounter in the icy north in January. To the right in the photo below, within the red circle, is the dwarf palmetto, one of the most northerly members of this family; apparently it can survive as far north as Ohio and Pennsylvania, though its appearance is rare. 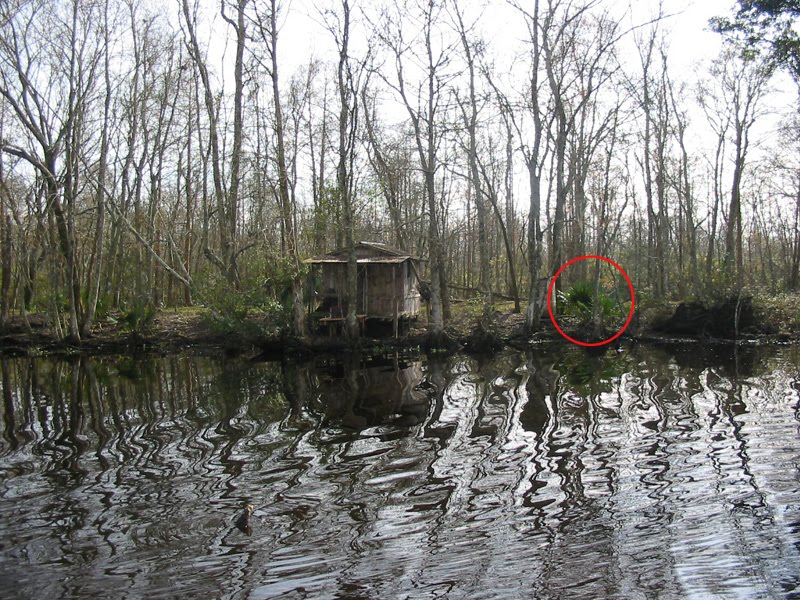 It would appear that the riparian understory does support flora that remain green in the winter; the taller trees in the background clearly don’t share this feature. Most apparent, however, is the absence of any towering palms or other evergreens; away from the cities and persistent human influence, the trees do not grow. They are not native.

So why, despite their potential health problems, are palms widely visible in the urban areas of south Louisiana? It’s quite clear to me that, as ornamentation, they have a richer symbolic content than most other trees—they immediately evoke the tropics and associative warm weather. Obviously this is hardly an insight: just think of any postcard or airbrushed t-shirt from Florida. What better way to greet tourists arriving from Saskatchewan than with a cluster of palm trees as soon as they step outside the New Orleans airport? Any beachfront community will have them if their climate can withstand it; those that cannot, such as the boardwalks of New Jersey, often decorate their streetscape with fake plastic palms.

Private homeowners may have adopted the tree for its aesthetics, but I don’t doubt for a minute that civic leaders of New Orleans and Baton Rouge decided many moons ago that they wanted to instill an ambience of tropical languor. Perhaps they borrowed it from Los Angeles, whose street palms are so intertwined with common perceptions of the city that we often cease to be fully conscious of it. “Oh, there’s a movie scene with lots of cars and palm trees whirring by; it must be L.A.” New Orleans may boast a humid subtropical climate, but it can on occasion be bitingly cold in the winter, sometimes dipping below freezing with high humidity, manifested by the snowy photo linked above from 2008. But south Louisiana rarely if ever experiences prolonged cold, so the palms survive, gently helping to evoke a city tucked into a jungle. And having boulevards lined with palms adds to the city’s cachet as an aspiring counterpart to Los Angeles, a second Hollywood (Nawllywood).

With the exception of the dwarf palmetto, these various palms are introduced species to the Louisiana landscape. Are they invasive species? Judging from the photos in the swamp tour, I suspect not—they grow adequately in Louisiana’s climate, but have hardly flourished outside of areas where they are overtly cultivated. This contrasts sharply with the quintessentially southern kudzu, mistakenly introduced in the United States as an erosion remedy which inadvertently proliferated at the expense of other native plants.

So earlier generations introduced the palm family to the American Southeast to serve purely aesthetic aims and it has generally blended well when under horticultural supervision; conversely, they introduced kudzu for ecological palliative and restorative ambitions and it has wreaked havoc. Both plants have accrued symbolic associations that, at least in cities like New Orleans and Baton Rouge, do not exactly harmonize. Kudzu carpets the muggy American South with such ferocity that it could not help but forge its own association; almost every homeowner has had to deal with it at some point. The palm family is a bit more precise, with associative staying power in Florida or coastal Carolina (obviously as part of South Carolina’s flag), but it doesn’t resonate as much inland, away from beaches. It might serve as an attractive embellishment in New Orleans, but it doesn’t leave a strong statement the way it would in Los Angeles. Palm trees are coastal; New Orleans, despite being surrounded by water, is not…at least not yet.

One plant surpasses either kudzu or palms at evoking the muggy clime of the Deep South: Spanish moss. Just a little further along that waterway in the swamp tour, some live oaks were brandishing a full variety of this peculiar epiphyte. 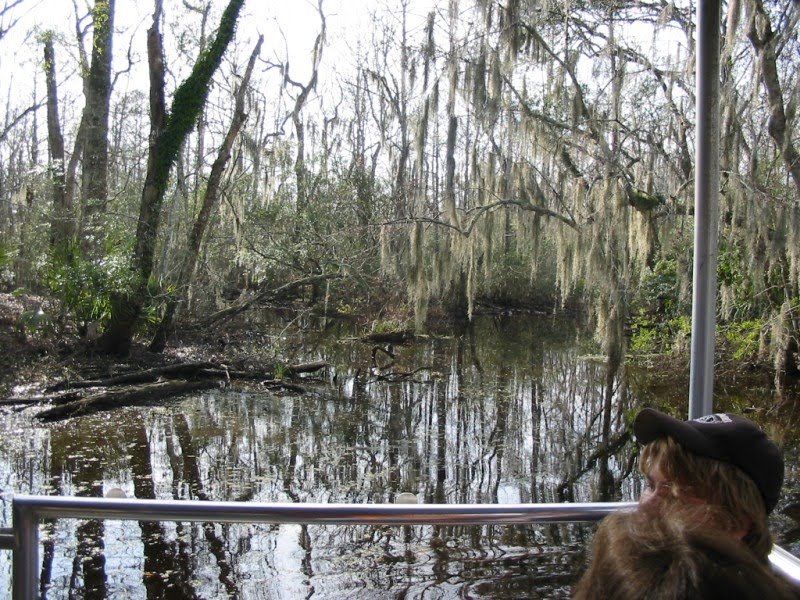 Perhaps its precision gives Spanish moss its advantage; it doesn’t stretch everywhere across the South like kudzu (you probably won’t see it in Tennessee or Arkansas), and, unlike palms, it doesn’t immediately recall vacations on the beach. Tourists don’t escape to the world of Spanish moss; it’s a web that tangles itself into the rich humidity of Louisiana and Mississippi—literally too, since its perch along tree branches allows it to capture the thick moisture in the air. If anything evokes Southern Gothic, it’s a silhouette of a tree with Spanish moss lazily draped amidst its leaves. Incidentally, very few of the urban live oaks in New Orleans carry Spanish moss—quite a contrast from the photo above. The only place a visitor is likely to see this peculiar angiosperm is in the large public spaces—open unpaved stretches like Audubon Park and City Park, where groves of live oaks still carry the plant on their branches. You can just barely make it out on this photo below, in City Park’s sculpture garden. 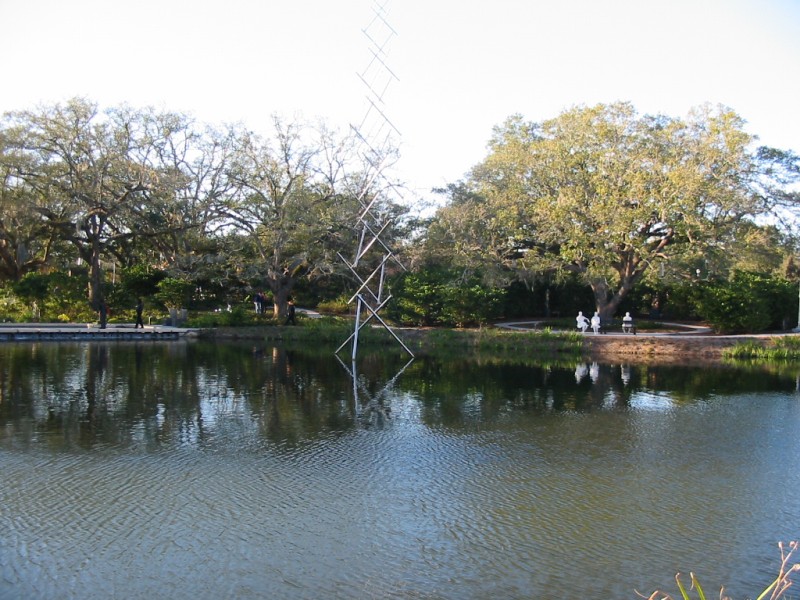 Why is Spanish moss hard to find on oak trees grown in back yards or canopied over city streets, yet the parks still seem to have them? I can’t help but wonder if the plant only thrives in open spaces, but otherwise struggles if an area is too urbanized. And the City of New Orleans Parks and Recreation decided to import it for its parks, deliberately flinging it onto city-owned trees to add Southern Gothic flavor in a city steeped with such tradition. Of course I’m probably projecting conspiracy theories, but it is clear that both cities and private landowners reduce certain plants to commodities, not just for agricultural or ornamental purposes but even because of the semantic legacy embedded within them. The future of New Orleans and coastal Louisiana is unclear. Whether it becomes a vibrant cousin of Hollywood or a tragically engulfed Atlantis, the plant life both within and outside of the cities—often quite distinct from one another—will always offer cues to the region as a sociocultural and ecological “other” – a piece of exotic pseudo-tropicalia here within our own borders.

PrevDoes a sluggish economy encourage inferior design?
Public art: importing both the craft and the credulousness.Next

7 thoughts on “Ambiance can be bought through a few seeds.”