Other bloggers and I have routinely pointed out barriers to good pedestrianism in our respective cities across the country. Sometimes it requires a sea change in collective thinking on infrastructural priorities, land use, building design, and building regulations. But all too often it’s far simpler than that. It amazes me how mundane some of these gestures are, but the fact that they are routine, omnipresent, and overlooked by all but a few demonstrates how systematic this practice is. Take, for example, the sidewalks just south of the Wholesale District in Indianapolis, barely outside of the Mile Square and just seven blocks south of the dead center of town: 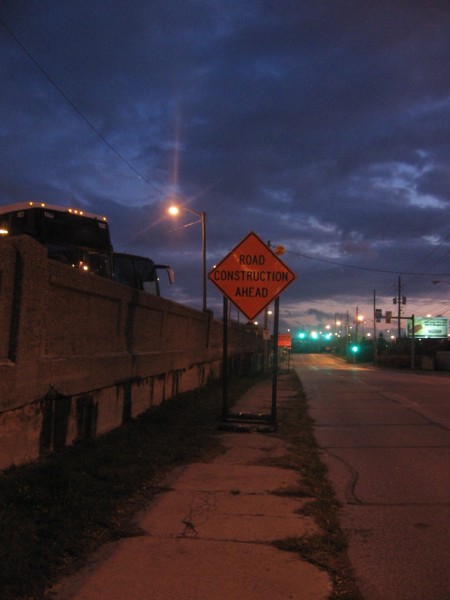 And, just a hundred feet further down this weathered, crumbling sidewalk: 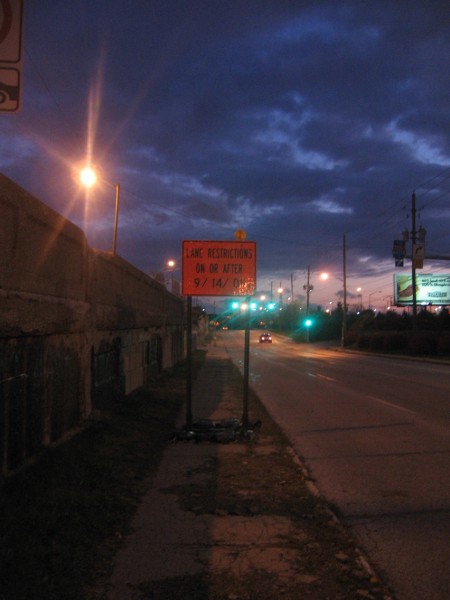 In both cases, signs announcing restrictions to automobile traffic flow are simultaneously restricting the passage of walkers. Granted, this area offers little more to pedestrians than a conduit from Point A to Point B, where Point A in all likelihood is a parking lot. Within a 300 foot radius of the first photograph are cheap surface lots, a drive-thru fast-food restaurant, low-rise logistical staging areas, and one converted old brick warehouse building with a puppet theatre at the street level. But does undesirability of the pedestrian argument justify its current inaccessibility? These caution signs are designated these precise locations by the Department of Public Works—the same city agency that maintains both roads and sidewalks.

Is the DPW cutting off its nose to spite its face? Such a trope may seem hyperbolic, but clearly the Department is inhibiting part of its own right-of-way for the sake of informing about the conditions on another ROW. I honestly don’t think that this derives from a genuine hostility toward pedestrians, since the DPW needs to have engineers who must be fluent in basic sidewalk design standards. They know how to build and maintain a good sidewalk, and will do what their budget allows. The Department’s placement of the sign does not purely reflect the act of sacrificing pedestrian access for the sake of cars, since most able-bodied persons could easily simply walk around these signs.

Truthfully, this sort of action falls in the same category as individuals who block the sidewalks in front of their home with garbage cans for trash pick-up, or who park cars along the street that straddle the curb, so half of the vehicles’ bodies encroach upon the sidewalk. For that matter, it also resembles the sign advertising parking that is blocking the right-of-way to the Cultural Trail which I blogged about in the past. In short, it reflects a complete negligence toward pedestrians, made all the more egregious when embedded in the operations of a bureaucracy such as the DPW; the negligence then becomes systematized. Many a Dostoyevsky novel has alluded to indifference as the most toxic psychological state because it involves an absence of emotion; at least both hatred and love share a certain common intensity of experience. This absence of emotion—this bureaucratic indifference—explains why a road sign blocking a sidewalk fails to arouse concern about how persons in wheelchairs would negotiate around it. Or, for that matter, why we’ve all seen this sort of thing before, but it generally fails to resonate; we overlook it completely.

Public works and transportation departments across the nation share a duty to recognize the diverse needs of motorists, manifest in their various responsibilities: applying different paving surfaces depending on climate, measuring and publicizing the carrying capacity of bridges, announcing the height of viaducts, recognizing the turn radii of various vehicles at intersections, and so forth. Seldom if ever will one witness a similar degree of solicitousness toward the pedestrian sphere. Until citizen protests reach a certain fever pitch—the sea change in collective thinking mentioned earlier that shows a genuine demand among constituents—one can expect many more snafus from DPW and other departments, all of them endowed with the responsibility to use our tax dollars for improving the city to the best of their ability.

PrevIn case it was unclear the first time, say it again.
The cosmetology behind civic art.Next

9 thoughts on “With friends like the DPW, who needs enemies?”