The cosmetology behind civic art.

At a time of high unemployment and sharply declining property values (and their ensuing assessed values), nearly every large city is wrestling with budget deficits. Among the first programs frequently to face the chisel is public art. While relatively uncommon until the last 20 years, most civic leaders now perceive a public art program as a pre-eminent “soft” benefit—one whose actual monetary value is often difficult to quantify, yet its absence can quickly drain a city of a certain marketing cachet in the face of its peer city competition. While monuments typically boast a commemorative function and plazas can serve as critical nodes of congregation, a true piece of public art at most becomes a makeshift jungle gym for children, but its preeminent intended role is aesthetic. Rarely does a piece of civic art become iconic—an emblem synonymous with the city’s basic identity—in the same way that the Washington Monument has achieved in the nation’s capital, the Statue of Liberty in New York, or the Hollywood sign that presides over much of Los Angeles. But public art plays its own distinctive, reticent semantic role in an urban landscape; at its most effective it poses a question, and the absence of a conspicuous answer alerts the senses of passers-by while penetrating the subconscious.

The nation’s sixth largest city, Philadelphia, has an involved but somewhat conflicted relation with its civic iconography. Perhaps the fixed object most representative of the city is the Liberty Bell, although it served a precise function in the decades preceding and following the Revolutionary War and didn’t even assume the “Liberty” name until it became associated with abolitionists prior to the Civil War. Some local Philadelphians may argue that the city’s true icon is the grandiose City Hall, the perceived center of the city, whose famed clock tower and William Penn statue briefly made it the tallest building in the world; others would claim that Rittenhouse Square, the most successful urban park in the city (and one of the best in the country) is the primary point of congregation. None of these, of course, qualify as formal public art; in Philadelphia that honor would go to the famed “LOVE” sculpture by Robert Indiana, where its strategic placement in “LOVE Park” overlooking the Benjamin Franklin Parkway and, at the Parkway’s opposite terminus, the Philadelphia Museum of Art. However, Indiana only intensified his image’s ubiquity (originally for a Christmas card) by producing duplicate sculptures across numerous cities, such as New York, New Orleans, Indianapolis, Wichita, and even elsewhere in the City of Brotherly Love. Perhaps all of the aforementioned icons take a back seat to the single image most associated with outsiders across the world—the famed steps to the Philadelphia Museum of Art immortalized by the original Rocky movie and several of its sequels. It is the most consistently visited site in the city by tourists and remains forever wedded to the city’s global profile.

With so many transcendent images vying for attention, it’s a wonder that the city has still devoted so much time and resources to a unified public art vision. The Mural Arts Program of Philadelphia may be the most single widespread initiative in the country. Though far more decentralized than the aforementioned icons, the culture of murals if far more pervasive. Humbly born as a project within of the Philadelphia Anti-Graffiti Network, it has escalated into a public-nonprofit collaboration that has brought international artists to collaborate with community members in the creation of over 3,000 murals scattered across the Philadelphia, the “City of Murals.” The locations, size, content, and representative styles of these murals vary widely—perhaps the most commonly shared feature is that they typically occupy the blank sides of residential buildings and the leaders of low income neighborhoods most frequently harness them as a community organizing and economic development tool. The murals below come from the largely impoverished West Philadelphia neighborhood of Haddington. 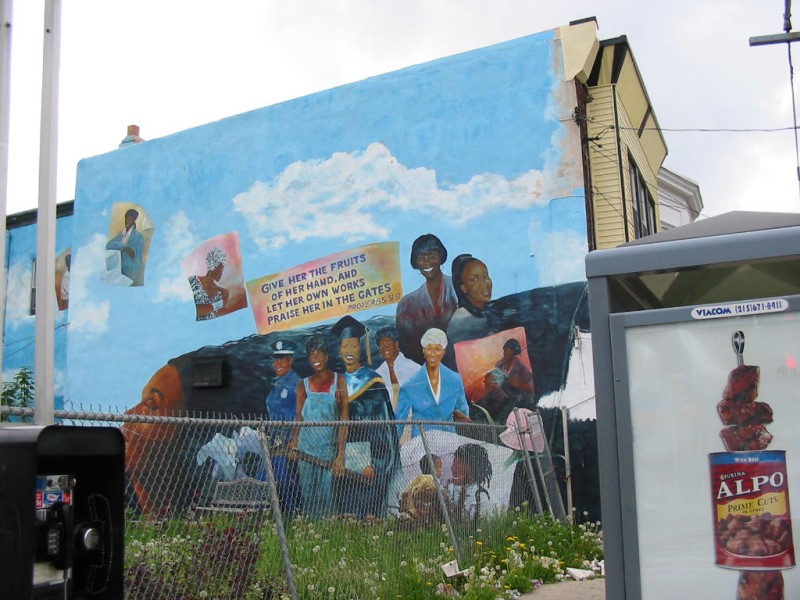 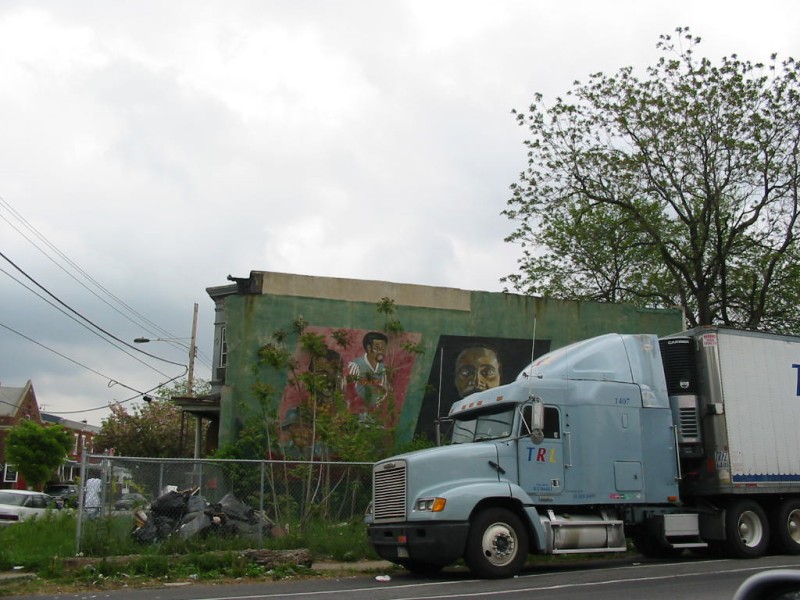 I must add a disclaimer that these murals are scarcely representative of the best work of the Mural Arts Program in the CIty of Murals, nor are they particularly good photos. For those unacquainted with Philadelphia’s achievements in public art, I urge them to visit the Mural Arts Program website to see some of the most accomplished results. However, for the purposes of this essay, these photos perfectly capture the fascinating conflict these murals pose as they preside over often broken neighborhoods. Like most public art assessments, determining the financial benefit (in terms of improved property values, diminished commercial vacancy, reduced crime or need for social services) is like catching butterflies with a fish net. In fact, the predominance of murals in Philadelphia’s poorest neighborhoods has unintentionally stigmatized the endeavor, despite the fact that many murals are in more affluent areas). Wealthy enclaves of Philadelphia have rejected commissions for a mural because of the negative association.

Meanwhile, in Haddonfield, the professional initiatives have spawned amateur imitations, most likely not sanctioned by the program: 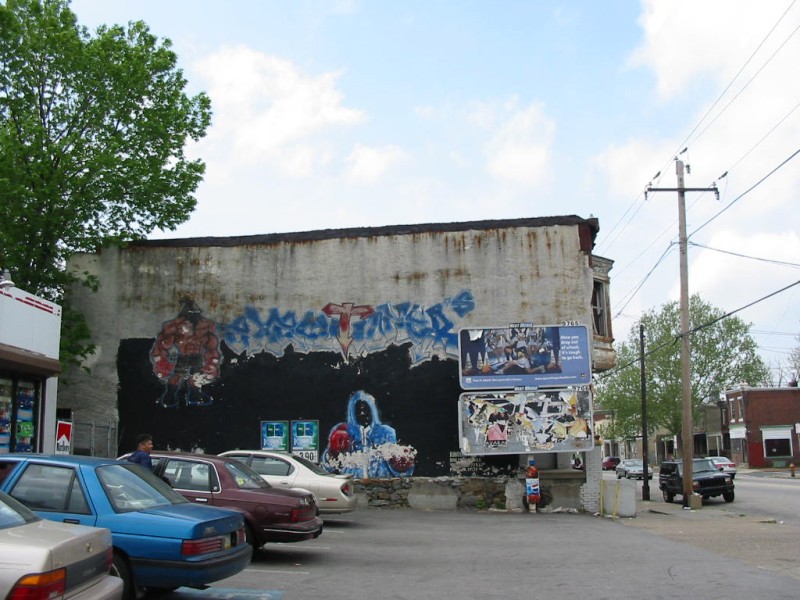 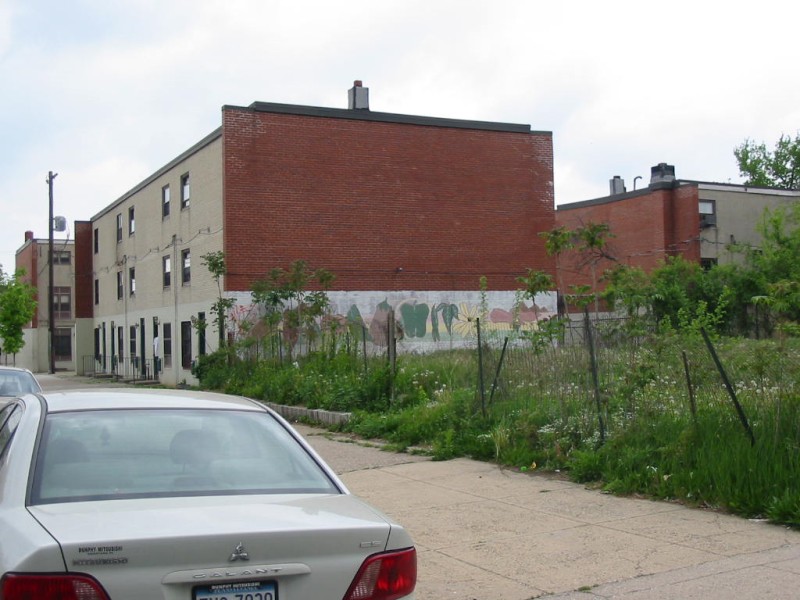 What have all these murals had in common? They occupy party walls of attached residential buildings. The rowhouse remains the most common housing typology in mid-Atlantic cities such as Philadelphia, and in the city’s poorest neighborhoods, the demolitions are often all too evident. In comparison, demolitions in Chicago and Indianapolis seem relatively subtle. Thus, these murals rest on blank side walls that overlook vacant lots where a viable home once stood. The evidence in Haddonfield suggests that the lots often remain unkempt and strewn with litter, regardless of the time, energy, and money invested in beautifying the adjacent brick wall.  With all these rowhouses–and so many demolitions–it’s no wonder Philly so easily ascended to the one true City of Murals.

Other cities have followed Philadelphia’s lead and instituted mural programs, though none are nearly as advanced. The question these murals pose, particularly when they are in intensely impoverished neighborhoods, is whether or not they accrue value as an immobile installation or if the real value is the way it brings community members together in an act of collective stewardship, cultivating an appreciate for the act of producing art. For example, what should be done in a neighborhood where housing demand improves to the point that someone seeks to build a new home in that vacant lot, thereby concealing the mural? Or contemplate the inverse: if the house on which the mural rests is itself abandoned and a safety hazard (or a drug den), should a demolition order exempt the wall that contains the mural, despite the expense of preservation? Murals simultaneously signify progress and decay, preventing any real cost-benefit analysis from yielding directly quantifiable results. The general reaction among the Philadelphia planning community appears to be that, while the Mural Arts Program remains unquestionably respectable, it should not impede redevelopment initiatives in a city long starved of any real influx of capital. Such a sentiment may show a callous disregard for both the labor and emotional investment involved in creating a mural, but they are volunteer efforts under the aegis of a successful nonprofit; they lack the capacity to build measurable wealth. Would the true signifier of success in Philadelphia be a city that has reached the point where the City of Murals no longer needs murals? It’s probably naïve to suggest that such an era may ever arrive, but the true glory of the Mural Arts Program—though no more measurable than anything else—may be the process far more than final result.

PrevWith friends like the DPW, who needs enemies?
Minor tweaks.Next

4 thoughts on “The cosmetology behind civic art.”