Perhaps humankind’s ambivalence toward wilderness is best manifested in our perception of what is truly beautiful. A single person could gaze admiringly at both Bryce Canyon and the Gardens of Versailles for their beauty, despite the fact that the external forces that created them couldn’t be more diametrically opposed to one another. Ideally the undiscerning viewer would recognize that millennia of erosive pressures generated the former; the latter is a product of wealth and imperial fiat. And we can recognize them as beautiful on their own terms. But the only human interventions needed to maintain Bryce Canyon’s natural integrity are barriers to prevent overt vandalism; Versailles demands millions of dollars and intensive labor to retain its appearance.  So does Oak Alley.

One can’t help but think that the French garden mentality enjoys a colonial iteration in the famed quarter-mile canopy created at the Oak Alley Plantation outside of Vacherie, Louisiana, about the midpoint along the Mississippi River between New Orleans and Baton Rouge. The double row of 14 live oak trees perfectly frames the stately house of 28 Doric columns and a central hall. 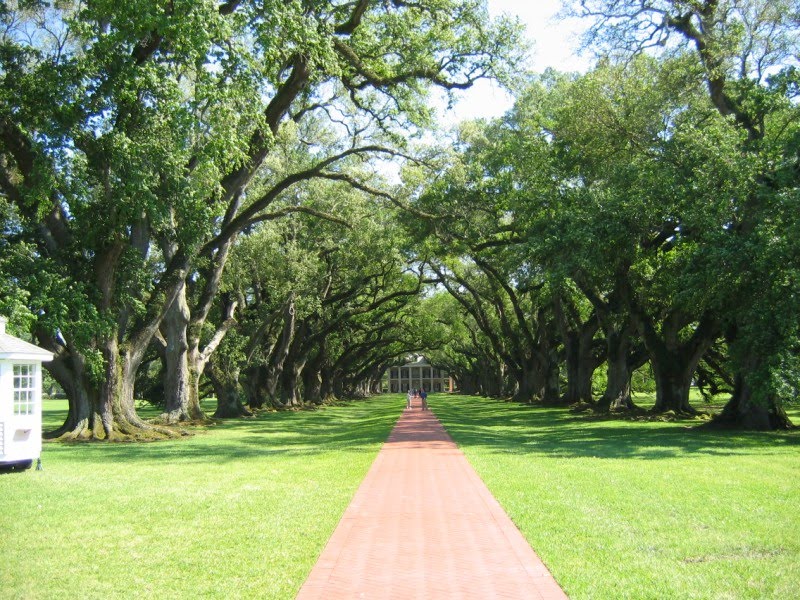 Despite its hefty 40 mile distance from New Orleans, the plantation remains a popular destination with tourists, often due more to the sublime beauty of the grounds than the house itself. Every tour guide will inform visitors that the trees predate the house by at least a hundred years; whatever home had originally received this sublime entryway had long decayed when the Roman family from New Orleans built the current house in the late 1830s. Thus, the home simply provided a destination for a pre-existing path—a visual terminus to the linearity implied by the mighty roots, trunks, and branches that flanked what must have been a dirt trail speckled with herbaceous growth. It’s a double artifice—the carefully planted pairs of 300-year-old live oaks, spaced far too perfectly to be a natural occurrence, coupled with a home that was not even the originally intended dwelling to rest at the end of the oak alley. It’s as contrived as Versailles. 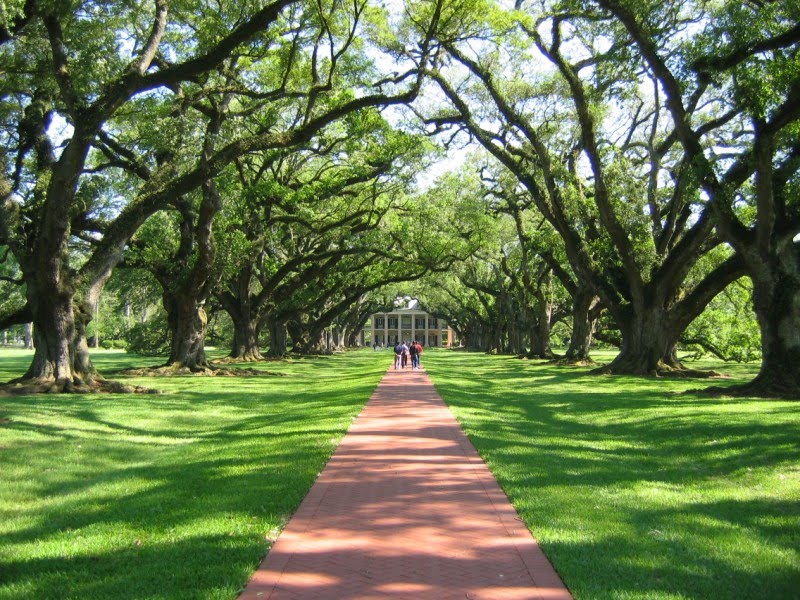 Lest you think I’m thumbing my nose at this National Historic Landmark, I must acknowledge that pictures scarcely do justice to the grandeur of this presentation. The visceral response it left me was obvious awe. But it’s not the beauty of a natural rock formation, or even a natural redwood forest; it’s a manicured aesthetic, as carefully ordered as an orchard but without the additional rows of trees and no fruit to harvest. Jacques Telesphore Roman no doubt realized he had found a real keeper when he bought the land, and he capitalized on the careful planning of earlier arborists who may have never witnessed the trees reach full maturity. Today they surpass in size nearly all the live oaks that line the streets of New Orleans. Obviously the site has long since fallen out of a general private ownership; the Oak Alley Foundation, a 501(c)(3) organization, continues to preserve and operate it for tourists. The grounds are the proudest feature of any tour of Oak Alley Plantation (though a good guide can also provide an excellent history of the house); the oak canopy becomes a sort of motif, as seen here with some significantly younger specimens in a different location on the property. 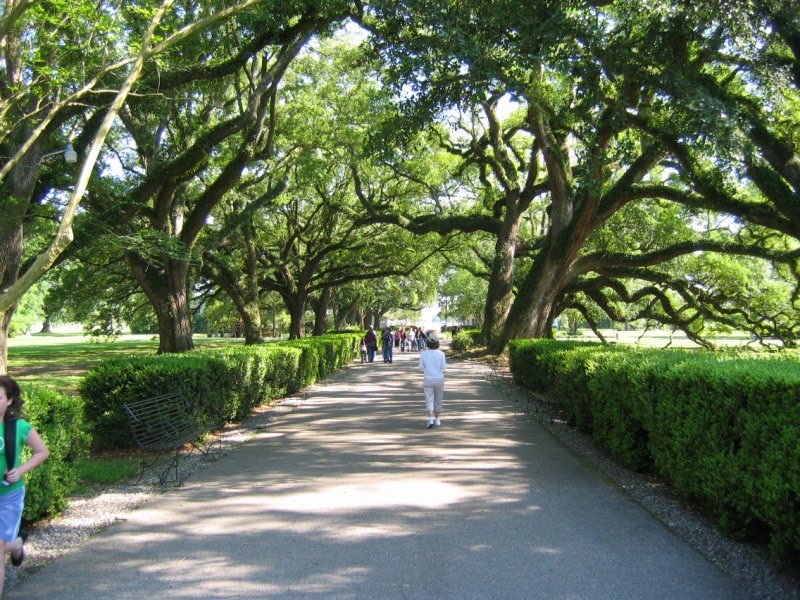 Elsewhere you can see the French garden emphasis on symmetry and order, to contrast sharply, no doubt, with the more naturalistic influence of gardens in parts of the country settled by the English. 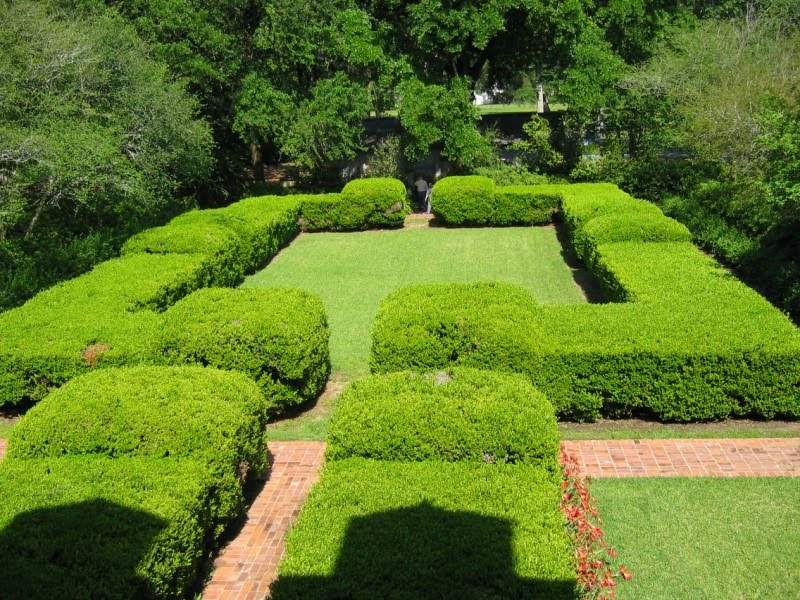 What is remarkable is not just the amount of care needed to keep the home, grounds, trees, and general landscape in order; the efforts to keep the trees from toppling—to defy gravity—are significant as well. Notice this proud tree midway along the row: 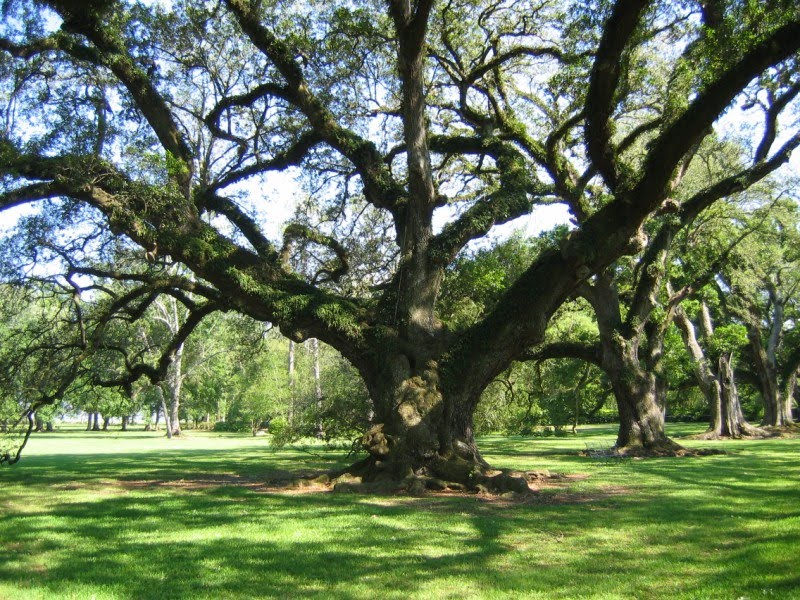 Now see where I have emphasized a telltale line with the red ellipse drawn in: 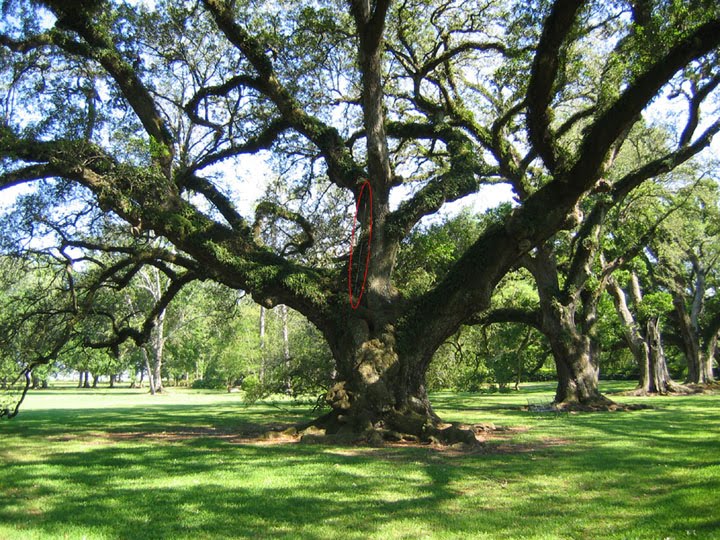 It’s a metal cable, stabilizing one of the top-heavy branches. They’re easily conspicuous when one gets up close. Nearly every one of the trees has one of these; some have several, preventing the off-kilter center of gravity from toppling these trees when a strong wind comes along. So far, it’s worked. All 28 trees remain standing, relatively equal in size and might. But it has required a careful, continual scrutiny of the laws of physics to keep the trees braced, wired, and rigged so that they retain the image so many visitors have come to admire. Live oaks are indigenous to Louisiana, and their comparatively short stature but tremendous canopy has proven them evolutionarily adaptive to the atmospheric conditions of the area—they are built to survive the wind shear from hurricanes. But not every tree lasts three centuries, nor do they always withstand Category 4 winds looking perfectly balanced. The guides at Oak Alley remind us that someday, one of these trees is going to succumb to a storm; if not in its entirety, then enough of the tree will snap to throw off the harmony and symmetry that creates this beautiful effect. Or, inevitably, one of the trees will eventually perish from natural causes.

And what then? Do we remove the corresponding tree across the path in order to preserve the symmetry? Do we replant a relatively mature tree from somewhere else on the grounds? Or do we concede that we have become puppeteers with this alley of live oaks—that the wires and cables are like the strings of a marionette? Do we recognize our limitations in harnessing nature purely for aesthetic purposes? Upon the 2003 collapse of the Old Man of the Mountain, a naturally occurring granite cliff feature that centuries of passers-by have anthropomorphized, scores of residents from New Hampshire debated whether it should be artificially restored, even though for nearly a century it had been unnaturally held together by braces and wires.

Oak Alley was human induced to begin with, but, like the Old Man in the Mountain, its preservation is based far more on emotion than species preservation. The equidistant positioning of trees in perfect rows does not violate any principles of ecological stewardship that I’m aware of—the worse that could be said is that it compromises the biodiversity of the understory through relentless shade as a result of spacing them too closely together. But while live oaks don’t usually flourish in groves, the spacing here at the plantation is not so close that they impinge upon one another’s growth patterns. The original planter clearly knew what he or she was doing. Ecologists aren’t likely to raise any complaints. And the finished product, the classic image immortalized in paintings and several Hollywood films, is rich enough with natural/artificial dichotomies to elicit a whole sophomore art history class worth of essays. I’ll spare any further metaphors and let other viewers decide if Oak Alley’s beauty is comparable to Chimney Rock, or the Joshua Tree National Park. Regardless of one’s opinion, its etiology shares more in common with the house: both the alley and the home took human intervention to create them, and now they depens just as heavily on intervention for their preservation and survival. It’s spectacular, it’s marvelous, it’s geometric, it’s ingenious, and it’s a whole lot of other things—but it obviously isn’t, and never would be, conceived by nature.

PrevIs it a chain? The writing’s on the wall.
Pause and rewind.Next

One thought on “Scaffolding for trees?”