After having cleared the three-month hump for this blog, I am still going strong and enjoying every post—and particularly the comments. I can’t say how much I appreciate responses—criticisms, affirmations, elaborations. Thank you! It is this blog’s reason for being, and those who are viewing quietly, feel free to pipe in. In due time I fear I might exhaust my own ideas for subject matter, but I have confidence that with a good dialogue (or even other people’s photo contributions, for which I will always give credit) these posts should be able to continue for years to come.

I will, however, be out of the country for the next week or so, and will have limited Internet access. I currently have one long, healthy post in the works, which, if I finish, I might post to the blog while I’m away; otherwise it will have to wait until I get back.

In the meantime, I want to reflect upon some posts from the past, for which I have received some updates as a result of my earlier investigations. Many moons ago, I posted an extensive coverage of the mentality behind “Complete Streets” and how the Indianapolis suburb of Greenwood is improving its internal bike and pedestrian connectivity. Using photographs and the city-generated trail map as my basis, I praised many efforts but found fault in their classification system for failing to distinguish sidewalks from trails and greenways, as well as the functional purposes for each. However, I have since come across a paper brochure version of this trail map, and the legend shows to me that Greenwood is on the right track. My scanner isn’t big enough to include the whole thing (and I’m too lazy to splice), but here is a part of the trail map that communicates all the relevant information for the purpose of this posting: 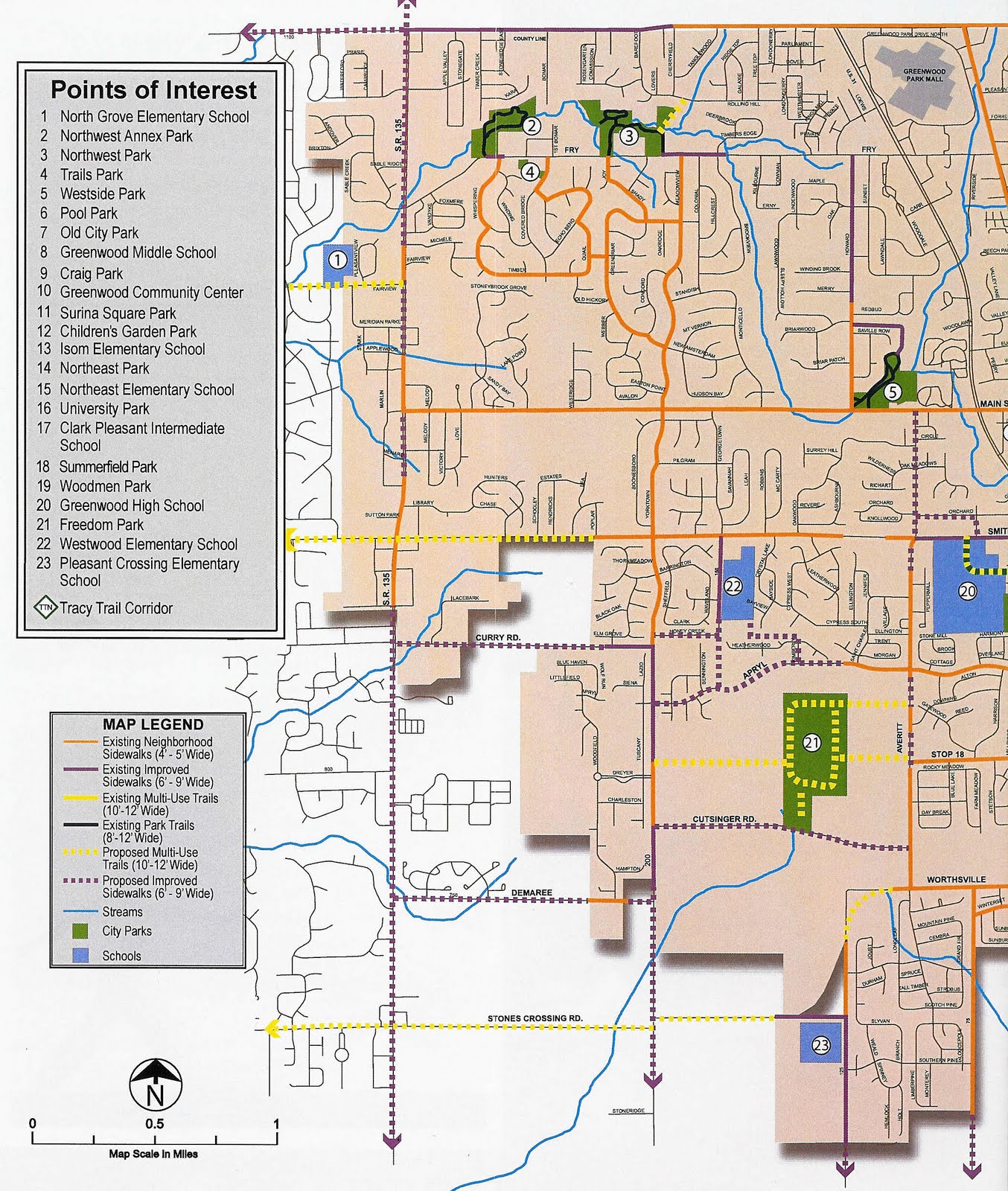 As you can see, it distinguishes trails by their width and intended use, which is exactly what is needed. I hope in the future they incorporate paving structure and any relevant signage or protective bollards into the methodology for trail classification. But this is a significant improvement over the PDF version of the trail map that the City provides on its website.

Some of my other research on sidewalks and pedestrianism resulted in a more recent post, about the amendment to the sidewalk ordinance in Indianapolis. I was critical in my blog entry about what I see as either lax enforcement of the ordinance or an easy way for developers to wiggle out of their commitment at providing full sidewalk coverage through a payment in lieu of sidewalks, and I pointed out some apparent examples on the south side where the amendment does not seem to have teeth. I wrote the City’s Department of Planning (now the Department of Metropolitan Development), pointing out these various weaknesses by identifying my blog entry to them, and I received this thoughtful response from Tammara Tracy, Principal Planner of Ordinance Revisions:

Thank you for your correspondence. I will attempt to respond your query, “I am curious how strictly it is being enforced” about sidewalks and the new ordinance and the other issues raised in your posting.

We do take the sidewalk ordinance amendment very seriously and we are enforcing it. Effective on July 1, 2008, the ordinance probably did not cover the examples you cited. If a project is in the pipeline of approval at any level, the rules that were in place govern; not anything passed after.

Some of the ADA ramps, etc. were actually part of the City’s retrofit efforts a number of years ago. While the existing sidewalk may not be up to the latest standard, we needed to make them as accessible as possible to everyone regardless of ability. Other sidewalk additions come by individual property owners or tenants. Some corporate entities do install sidewalks in their developments (part of their national standards) because they understand their value.

In Marion County, there are two instances that a contribution in lieu of constructing the sidewalks can be made:

The reasoning for allowing the contribution option is the reality of developing in a city that has been growing since 1821. Over the years, a multitude of regulatory & development philosophies have been implemented, each leaving their mark. For instance, inside the “old city limits,” you will find sidewalks along most streets and the storm drainage collected into underground pipes, in contrast, outside the “old city limits,” there are few sidewalks and much of the development uses open ditches for their storm drainage. To install sidewalks along a street that has an open ditch (i.e. drainage swale) along it is no easy task. To enact an ordinance that addresses these realities must provide options.

It is much easier to pass and attain compliance in new towns and cities because they are smaller, development is typically on ‘green fields’, and since these new towns are much smaller, the impact appears more significant.

It is also important to note that the funds collected by the payment in lieu of construction option are exclusively for new sidewalks, are eligible for federally matching funds (80/20), and will be used to build strategic linkages between sidewalks and provide sidewalks to enhance our transit system.

While it is important to pressure one’s government to regulate appropriately, it was fascinating to hear from the development community that they ‘never receive complaints’ about this issue (or many others). Therefore, as a customer or observer of the market place, it can be more effective to simultaneously make these and similar suggestions to the development entities themselves. Then at least, when government does go to the development community to change the regulations, they will know firsthand that it is indeed a public concern and not just a bureaucrat’s idea.

Thank you for your interest in making Indianapolis a better place. . .

In response to her letter, I thanked her for her vigorous reply and clarification, especially in terms of the payment in lieu of sidewalks. I also maintained my belief that the ordinance could still allow far too much maneuvering room for developers if the application of the payment in lieu of sidewalks is as conservative as it seems. After all, “extreme topography challenge” should be a rare excuse in a relatively flat city such as Indianapolis; compared to cities in the west and east, Indy has no topography challenges to speak of. I also asked about a specific redevelopment going up which has clearly taken place since after the sidewalk ordinance, and I informed her that as of yet this new gas station does not appear to have installed a sidewalk. Ms. Tracy again responded promptly:

Yes, this conversation is public information. You, as the intended recipient, may use it.


I believe the gas station you referenced is located at 5470 S. East Street. It was issued an Improvement Location Permit (ILP) on Feb 19, 2009. The owner has one year from this date to install the sidewalks. The sidewalks are indicated on the site landscape plan associated with the permit. A copy is attached.

You can track Permit & Compliance of a property using the tool from this page: http://www.indy.gov/eGov/City/CodeEnforcement/Resources/Pages/Research.aspx

You will need an address.

This could prove a useful tool for those who are concerned about the enforcement of the sidewalk ordinance in various developments throughout the city, particularly how payment in lieu of sidewalks can become a sort of escape clause. It’s worth a further look when I get back from my trip. All the best until then.

2 thoughts on “Pause and rewind.”