Urban historians have devoted pages upon pages in books to the reclamation of long-abandoned developments by wilderness—a wilderness that these developments originally replaced. It doesn’t take long to discover excellent photo montages on the return of flora and fauna upon long-neglected human settlements, such as James Griffioen’s excellent series on the feral houses of Detroit. Through schoolbook pictures of ruins from Greek, Roman, and Egyptian civilizations, or even the ghost towns of the Western US created by the bust after the gold rush, children discover at a young age the devolutionary process of “unbuilding” something through decades and centuries of neglect.

In some of the more verdant parts of the country, the reclamation is complete; virtually nothing from the old ghost towns remains. John Stilgoe, in his Metropolitan Corridor: Railroads and the American Scene, writes of the “wildering” that transpired as New Englanders abandoned their farms due to lack of economic productivity. Our collective consciousness of rural New England today typically summons images of grandly forested hillsides punctuated with craggy granite cliffs, but much of colonial New England was as heavily cleared of trees and cultivated for crops or pastures as the Midwest is today. The discovery in the early 19th century of the vastly superior soils in the Northwest Territory led to a similar but less romanticized “rush” of sorts, and New England farms could scarcely compete. Those New Hampshire and Massachusetts farmers who didn’t push westwards often ended up trading their vocation for a life in the neighboring mill towns. The few farms we see today in New England represent the oases of fertile land—the only places where agriculture remains the highest and best use. Stilgoe reflects upon the ethos captured by 19th century observers of the wildering process:

“American novelists and poets consequently either ignored the abandoned-farm problem by writing about the past glories of rural New England, or else they scrutinized the ruinous landscape as the emblem of a withered, twisted people from whom little could ever again be expected. Nowhere in American literature is the meaning of environmental representation more clearly presented: industrious, thrifty moral people create and maintain neat fields, straight walls, and snug houses in the face of wilderness, winter storms, and the temptations of the Devil—only lazy good-for-nothings abandon land shaped by their righteous ancestors and succumb to temptation.The fictional and poetical treatment of New England ortsbewüstung suggests that the nation’s first encounters with decay shook the popular faith in a wilderness-conquering manifest destiny. . . Ordered, efficient, well-maintained space—the space of terminals, industrial zones, railroad rights-of-way, productive suburban back yards, and velvet-like lawns—had become good.” (p. 325)

The widespread abandonment in many industrialized cities today does not usually elicit the same kind of scorn; most people recognize why Detroit is filled with ruins, and even if they typically dislike what they see there, most would restrain any scorn for the people who once lived in the city and fled. But the miles upon miles of perfectly ordered suburban lawns suggests that, in general, we have retained attitudes about ordered nature in human settlements serving as a principal indicator of civilization. Most municipalities have code enforcement units to focus on those homeowners who violate the maxim of a well-kept lawn; letting nature take its course in a front yard could leave the average suburbanite with an expensive citation.

My suspicion is that we unconsciously apply these same standards even in the natural setting. Any Southerner will know full well what I’m talking about if I were to mention the kudzu problem, and most would probably spice their reaction with a few expletives. Its ability to proliferate wildly in hot, humid climates has given it the nickname of “the vine that ate the South”. It’s so ubiquitous south of the Mason-Dixon Line that anyone who has visited has undoubtedly seen it. And, like those pesky dandelions that invade the otherwise pristinely green carpet of a front lawn, it is an invasive species. As this whimsical article from the Washington Post reveals, kudzu arrived in 1876 as an exhibit for the Centennial Exposition in Philadelphia, promoted as an ornamental plant and forage crop. In the first half of the twentieth century, a federal agency called the Soil Erosion Service encouraged farmers in the Southeast to plant kudzu (to the tune of $8 an acre) in order to prevent soil erosion. However, by the 1950s, the government realized they had the botanical equivalent of an epizootic on their hands: kudzu has the ability to grow 10 feet a month in the right climate, and it suffocates other plant life through its mass and dense shadow. Its omnipresence squanders biodiversity by forcing animals that fed on the suffocated plants to forage elsewhere. The results can be simultaneously beautiful and repugnant: 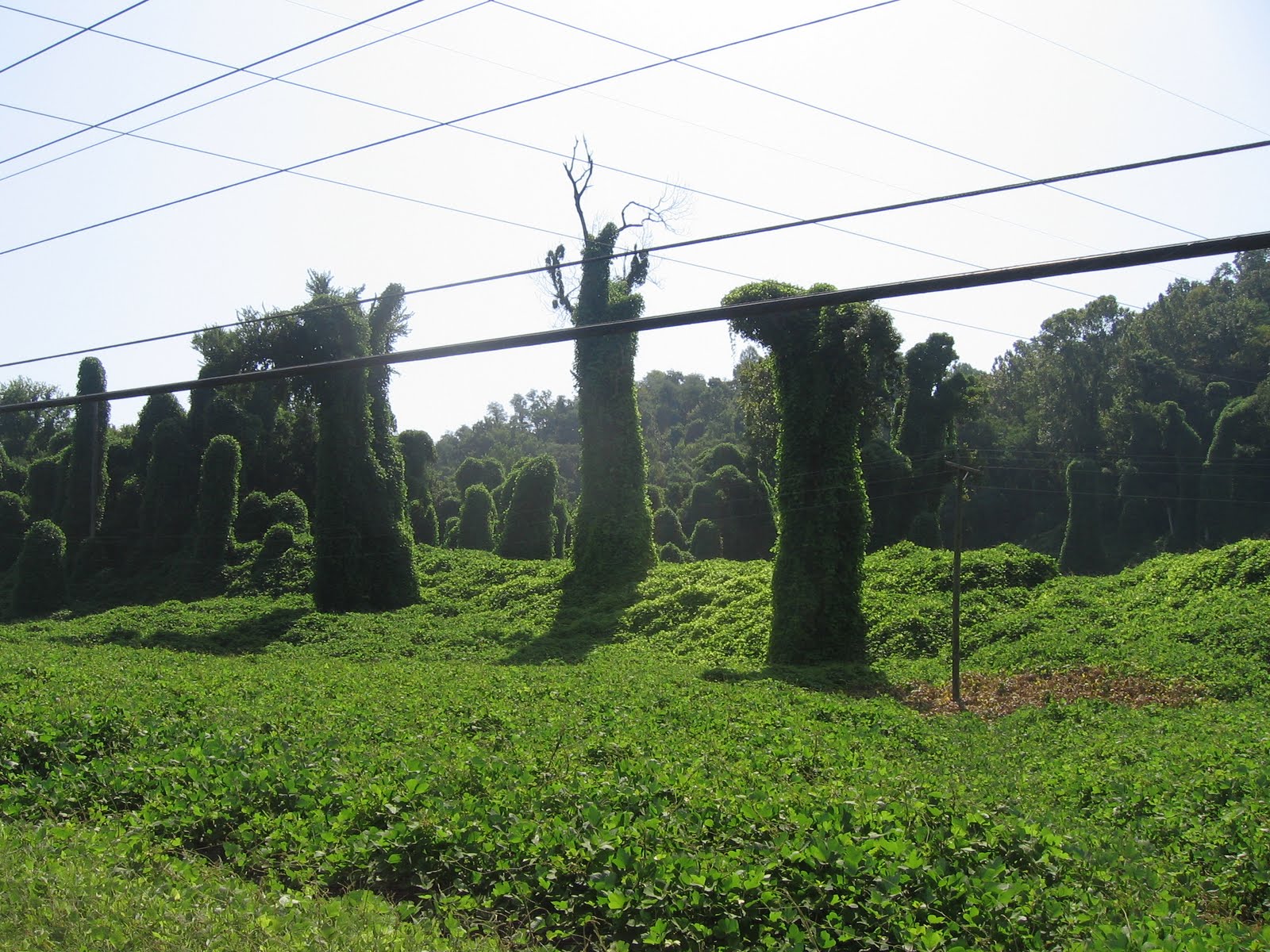 This photo, taken amidst the deeply rolling hills of southwest Mississippi, just south of where the topography flattens into the alluvial plain of the expansive Mississippi Delta, demonstrates the ruthlessness of this great victor amidst Darwinian struggles. Kudzu’s viney root crowns don’t just attract to xylem tissue; they can spread across cropland, tractors, masonry, and, not surprisingly, wooden homes. Like Detroit, New Orleans hosts more than its share of feral homes covered in kudzu, mostly from Hurricane Katrina-induced abandonment (though the city had its fair share of kudzu-strewn vacancy beforehand as well). What remains to be seen is how to intervene in places like rural Mississippi, where this conquering plant is pervasive. 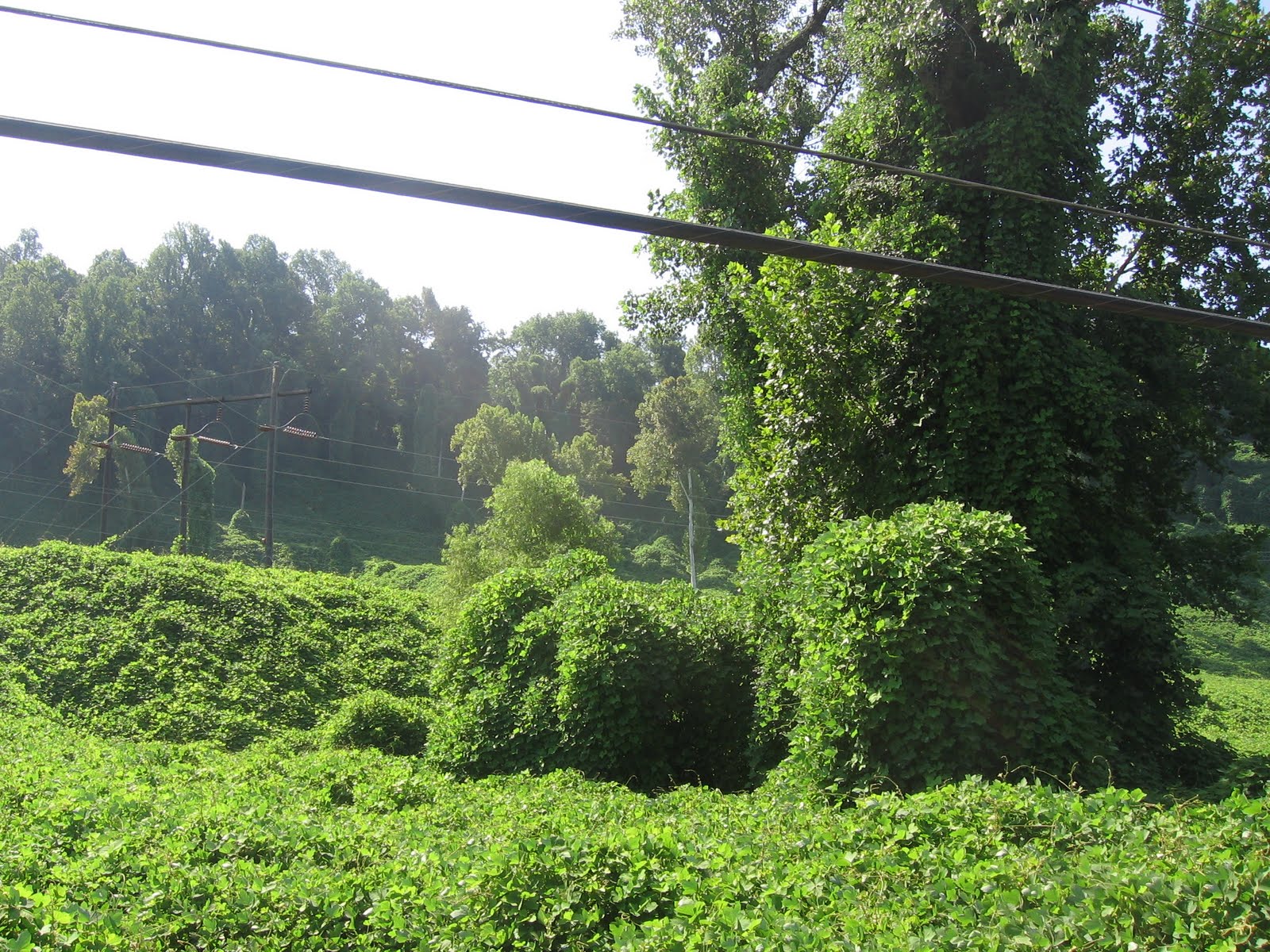 Rural areas that are not put to economic use are unlikely to generate any capital if the kudzu is removed, so the investment in kudzu control is often a lost cause. The only element that the human settlements have at stake is loss of electricity if the utility poles succumb to the plant as well. The picture below suggests that a government entity most likely had to intervene to salvage the electric wires here: 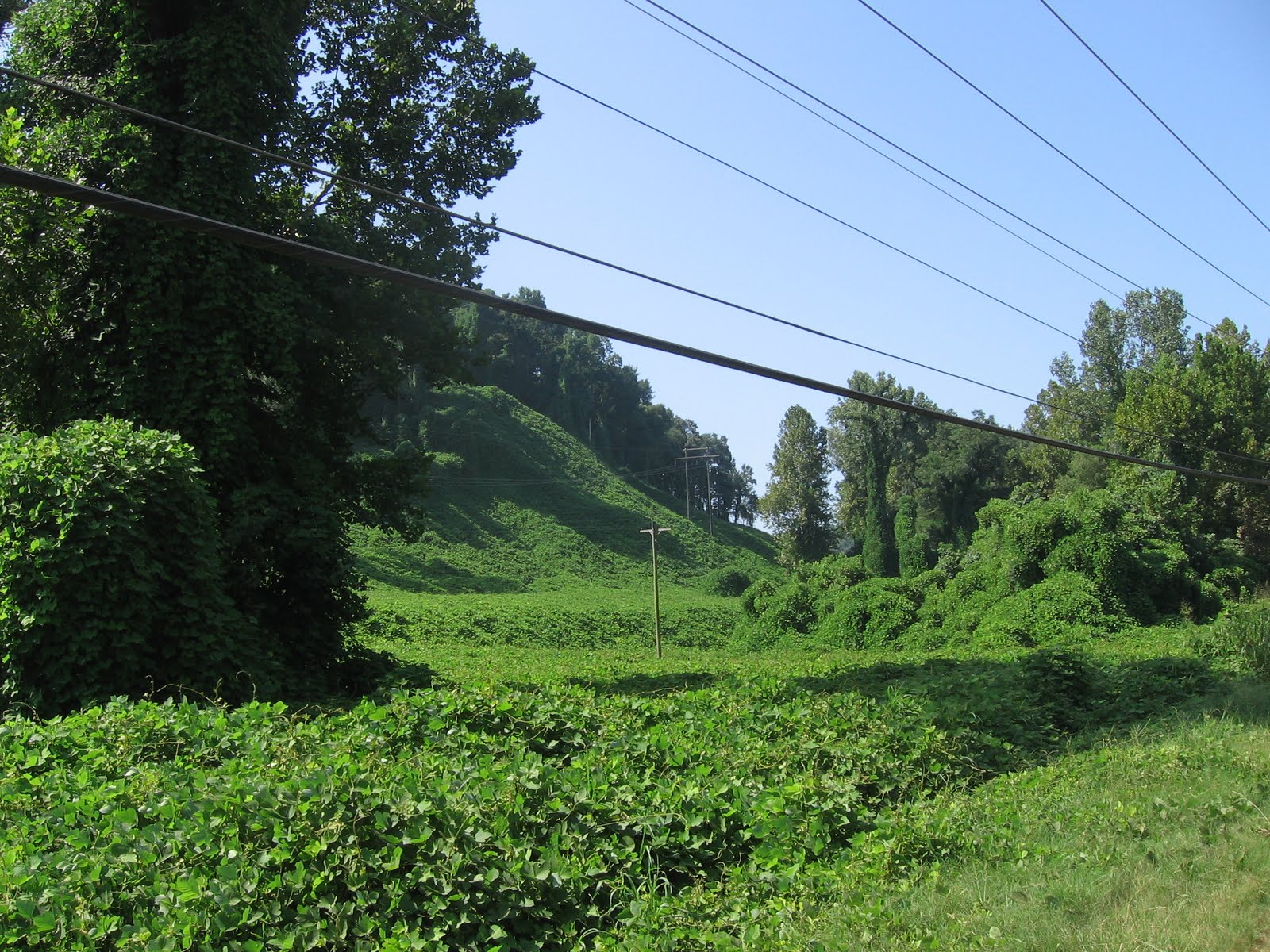 In light of Stilgoe’s observations in Metropolitan Corridor, kudzu operates as a paradigm for understanding the ethical implications of ecological management. Do we fulfill our god-given mission as an industrious nation by destroying the plant the way we eradicated malaria? Or should we allow it to continue its natural process? Or is the process inherently unnatural because kudzu never existed in North America prior to human introduction? Would we consider its deleterious effect on local biodiversity to be harmful if it wasn’t an invasive species? Fortunately, kudzu offers an incredible array of uses: livestock often enjoys it as feed and it is quite good for them; it adds nitrogen to topsoil; it even contains isoflavones that offer a variety of health benefits. Some Southerners have made lemonade out of their lemons, using kudzu for baskets, paper, soap, and jelly. But the toll it might take on agriculture and electrical access for a sparsely settled, economically challenged region of Mississippi is too significant to ignore, let alone the vine’s negative impact on biodiversity. The cost for Southern homeowners in controlling kudzu can be significant, but at least they have an economic incentive to destroy it from the sides of their houses. The wildering that engulfed the obsolete New England farms seems innocuous in hindsight—here’s a wildering where the greatest victim is the voiceless wild itself.

PrevThe true harbinger of social meltdown in New Orleans.
Is it a chain? The writing’s on the wall.Next