Is it a chain? The writing’s on the wall.

I recently made a rare trip to the affluent north-side Indianapolis suburb of Carmel to eat at a restaurant on the city’s western fringes. Kincaid’s is a relatively new arrival, marketing itself as a fish, chop, and steak house, sitting as an outparcel in the equally relatively new lifestyle center Clay Terrace. 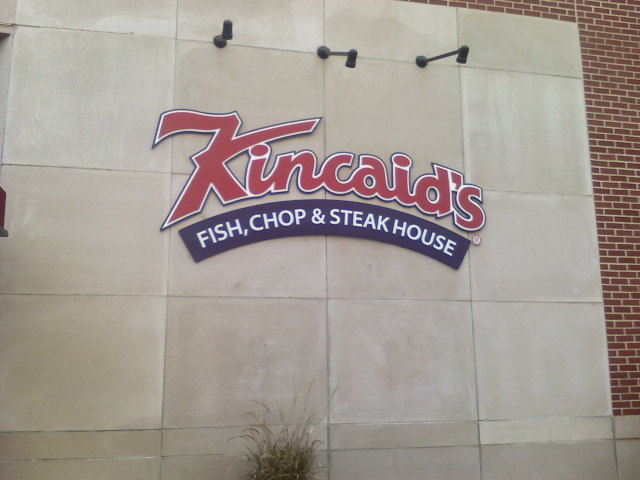 The upmarket establishment offers a menu that directly competes with more commonplace brands such as McCormick and Schmick’s or Sullivan’s Steakhouse. From the masculine stained wood interior to amply cushioned booths and the steamed asparagus we’ve come to expect as an accompanying side dish, this restaurant has honed the precise formula for conservative yet contemporary chic. 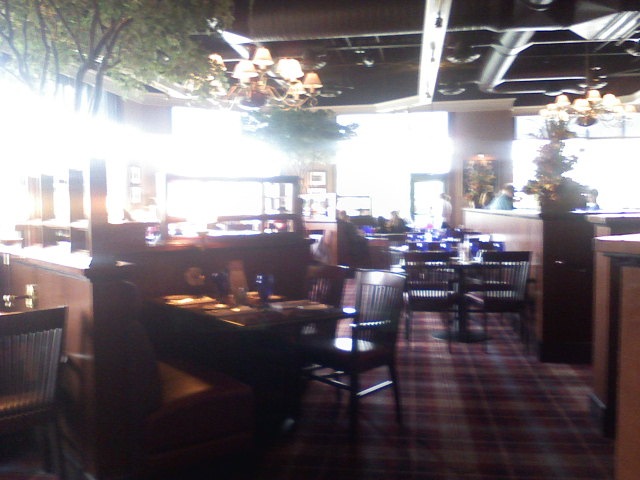 (My apologies for the poor photo quality; I had to take the pictures on the sly from a 1-megapixel cell phone.)

Hold your breath: Kincaid’s is a chain. But, unlike the aforementioned competitors, it’s not (yet) a ubiquitous mega-store found in every major CBD or upscale pocket of suburbia. At this point it appears to have been conceived as a micro-chain, with about 10 locations scattered across the country (not isolated to the Midwest). What further distinguishes Kincaid’s from other aspiring restaurant brands are the portraits covering the walls of its interior. In the vestibule hang small framed postcards such as this, a vintage chromolithograph of downtown Indianapolis: 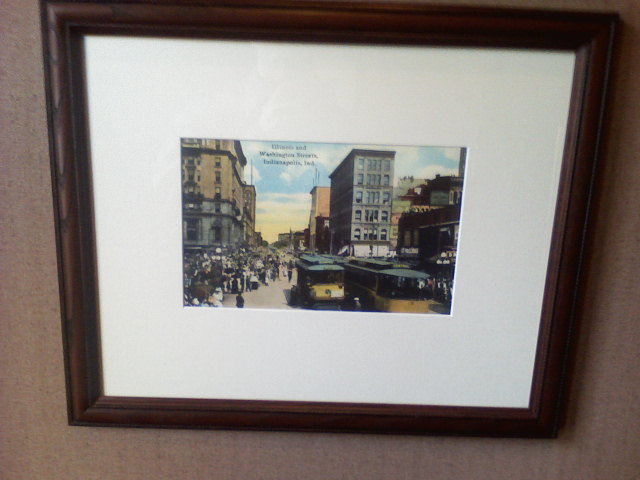 And immediately upon entering the restaurant one spots this large vignette from a historic bicycle race, among the early Indianapolis competitions that established Marshall Walter “Major” Taylor as a pre-eminent young cyclist before racial discrimination forced him to seek his fortunes in the Northeast and in Europe. The Major Taylor Velodrome in near-Northwest Indianapolis honors the man today. 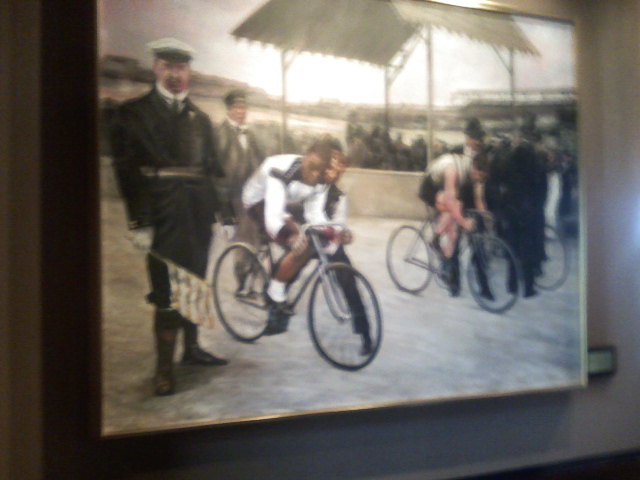 The remainder of the restaurant is filled with other images evoking the city’s past, from the fairgrounds at RiversidePark to the earliest races at the Motor Speedway. Even the restroom contains replicas of historic titles from, in this instance, the obscure and long defunct Indianapolis and Saint Louis Railroad Company: 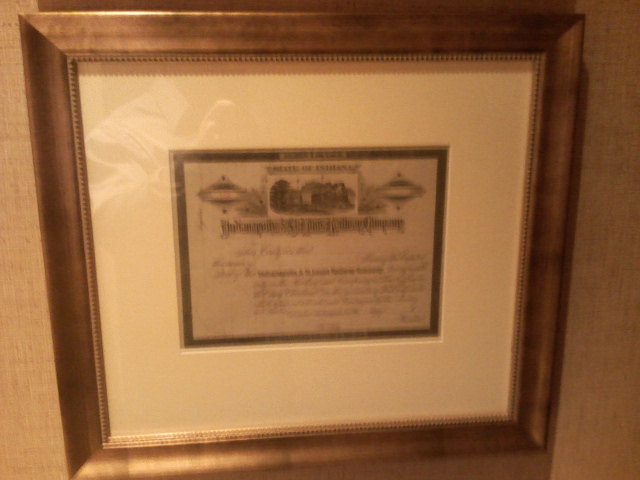 While unremarkable on their own, these framed wall ornaments surpass anything I have ever seen before in terms of restaurant’s expenditures to convey a vaguely local flavor. Other chain businesses have attempted this, but rarely to my knowledge at this capacity or level of expense. Virtually every object mounted to the walls contains some reference to Indianapolis. No doubt by saturating the restaurant with local imagery it hopes to de-emphasize the mass-market, impersonal appearance the general public often associates with chains.

Kincaid’s is hardly the first enterprise to attempt this with its interiors. The upper-middle market fast food chain McAlister’s Deli, with far more locations, has allowed its franchisees to decorate the walls with sports memorabilia from the colleges and high schools in their respective communities. However, McAlister’s genuinely began as an unassuming little hang-out that made it big: its original location in a converted old gas station in Oxford, Mississippi is covered with Ole Miss paraphernalia. And by this time, everyone knows McAlister’s is a chain—the local sports merchandise playfully rests alongside other antiquarian bric-a-brac. Kincaid’s, on the other hand, appears to have been a corporate concept from the start, brought to us by Restaurants Unlimited, a Seattle-based enterprise also responsible for upscale dining ventures such as Fondi, Stanford, and Palomino, the latter of which has a branch in downtown Indianapolis. The high level of working capital with which Restaurants Unlimited is operating is reflected in the amount they have spent on “localizing” their branch in Carmel, a practice the company most likely had to replicate in Minneapolis, Phoenix, and Honolulu, among other locations. Thus, one can surmise the interior design budget to be relatively high: even if the carpets, furnishings, and lighting are all the same, Restaurants Unlimited could not possibly order its wall decorations in bulk. Few chains have visibly invested so much in trying to suppress the fact that they are chains. But could it achieve the opposite effect? The wall mountings themselves are hardly garish, but with such a bombardment of non-corporate elements—suggesting parochialism so superficially that it compromises its subtlety—may come across as desperate backpedaling, ultimately reinforcing the exact generic character that the brains behind the restaurant were trying to suppress.

What do these choices of interior say about consumer preferences? Could it be that Restaurants Unlimited knew that if their concept in Carmel looked too mass-market that it might erode its base of clientele? Indianapolis, along with a handful of other cities in the Midwest, has long endured a love-hate relationship with national chains for its reputation as a “test market”—a city whose demographics come closer to reflecting that of standard America as a whole than most other cities. Being a test market has given the city a disproportionate number of chain restaurants, and local food advocates, aware that this can be damning for a city looking to broaden its national and international cachet, are pushing to change this reputation. Carmel operates as a sub-unit within the broader Indianapolis metro, but it, too, is trying to distance itself beyond its former role as an affluent but bland patchwork of big houses and strip malls to become a nationally prominent suburb, comparable to Naperville (near Chicago) and Overland Park (near Kansas City) for the reputation of its schools, parks, centralized downtown, and cultural offerings. Kincaid’s does absolutely nothing to advance Carmel’s attempt at reinvention—it represents old, stodgy Carmel to the extreme. The exterior when you step out those doors says it all: 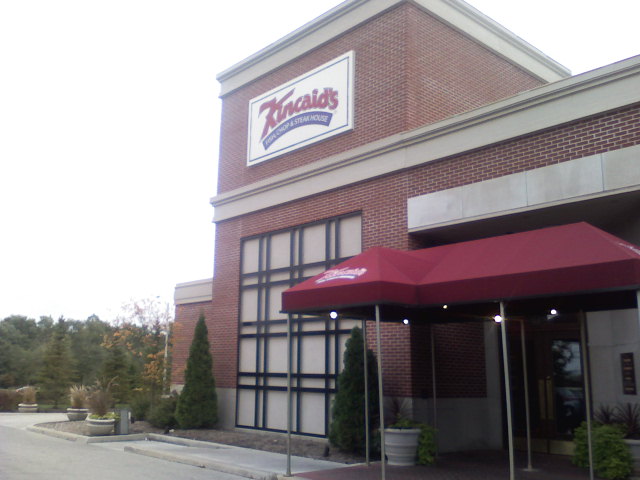 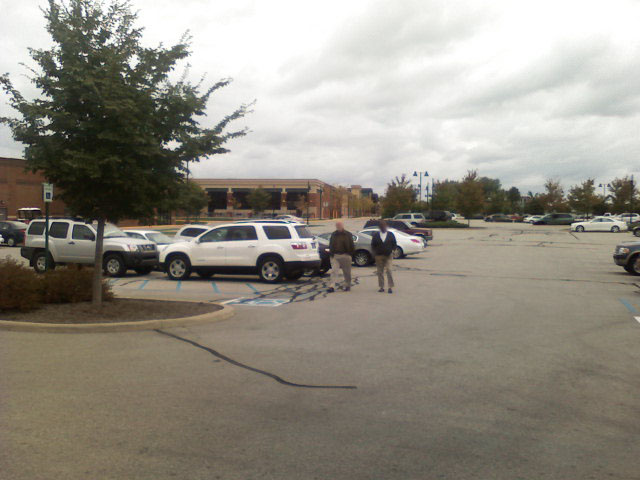 Parking lots the size of cornfields comprise the vista from the front, while the back of the structure features outdoor seating in which careful landscaping buffers the view of a six-lane highway. No doubt the market analysts working for Restaurants Unlimited studied the purchasing power and buying practices of west Carmel to a tee in order to determine that Kincaid’s would succeed there. But not all there efforts have been successful: the withering economy has killed a number of restaurants across the country, including a year-old branch of Kincaid’s in Portland, collapsing along with a cluster of locals and national chains. Whether Kincaid’s will attempt to expand to the size of McCormick and Schmick’s (with nearly 100 locations in North America) while retaining its commitment to framed paintings or lithographs of traditional scenes in the respective locations is yet to be seen. However, Kincaid’s success as a micro-chain may augur a new approach by national brands at personalizing their chains through relatively simple gestures to broaden appeal and reduce the public’s apprehension toward corporate sterility. Restaurants Unlimited most likely recouped whatever costs it incurred in the personalized décor through a standardized menu; based on their website, differences between food offerings from location to location are infinitesimal and usually only involve a slight change in price.

These gentle attempts at personalization can even take place at the major big-box establishments. Witness how many Home Depot chains feature the name of the state under their respective logo out front: “[Your State Here]’s Home Improvement Warehouse”. Granted, this approach is slightly less precise (and not consistently applied in some of the newer Home Depot models) but it requires a greater degree of specialization in sign production. The technique does, however, yield one obvious caveat already hinted at before: if this evolves into a widespread tactic adopted by national chains everywhere, it, too, will become assimilated into the same tired formula as mahogany booths and steamed asparagus.

2 thoughts on “Is it a chain? The writing’s on the wall.”