ADA: sometimes the cure is worse than the disease.

Rest assured that this blog post is not going to rail against the Americans with Disabilities Act (ADA). The few federal legislators who opposed the 1990 law are hardly clamoring to remind the electorate of the wisdom behind their decision. Their argument—that it could excessively burden small businesses by forcing them to change their building’s design—lost its viability when the ADA included a provision to exempt businesses that could provide ample proof of financial or operational hardship,. Thus, the law’s desired effect was to maximize handicapped access to public buildings and improve accessibility significantly to private ones, all without forcing entrepreneurs to close who could not afford it. Every physical incarnation of ADA’s effect has opened doors for a far too often neglected constituency.

True universal design, though, incorporates far more than just ramps for wheelchairs or wider restroom stalls, many aspects of which are not protected by law: the position of door handles in the corners of rooms, the location of the knobs for stovetop burners, or smoke detectors that flicker for the hearing impaired, in addition to sounding an alarm. Because I began writing this blog post from within a country whose provisions for the disabled can be described as scattershot at best, I can increasingly appreciate the far more consistent efforts in the US toward improving accessibility, even if they sometimes—perhaps frequently—fall short.

The structure in question here rests on a triangular shaped parcel in downtown Indianapolis where New York Street converges with the diagonal Massachusetts Avenue. The 1870s-era Italianate Hammond Block Building essentially adheres to the massing usually labeled “flatiron”. The original developers clearly saw that the advantageous shape of the parcel facilitated an entrance that is clearly identifiable to passers-by as well as aesthetically pleasing; the door’s location at the vertex of the acute angle formed by the roads also preserves the building’s symmetry. As seen in the more recent picture below, the Hammond Block is the three-story structure in the foreground. 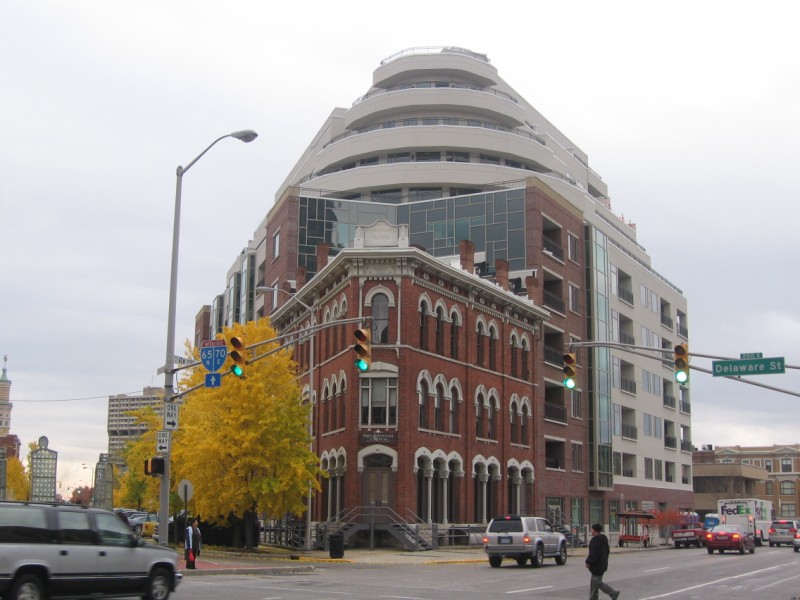 While this entrance may have proven adequate by nineteenth century standards, enhanced building codes in later decades would require that the owners provide an alternative fire escape. And, of course, by the last decade of the 20th century, such a structure would need to comply with the Americans with Disabilities Act. Some views from the sides of the building along show how subsequent modifications to the Hammond Block addressed both of these regulations. Here is the building’s side that fronts along New York Street: 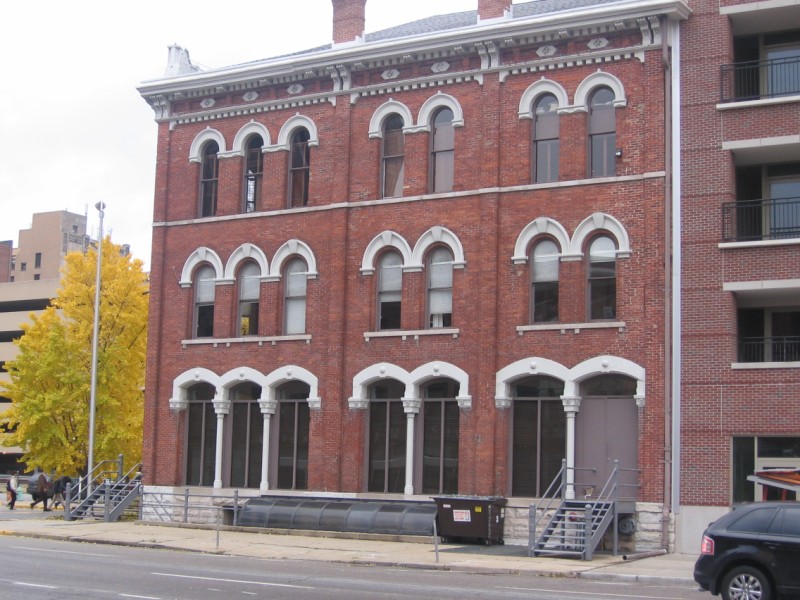 The stairs to the far right, leading to the first floor, are an obvious late addition, as is the stairwell leading to the garden level, mostly visible in this photo from the curved class awning attached to the limestone base course. More telling, however, are the alterations made on the other side of the building, facing Massachusetts Avenue: 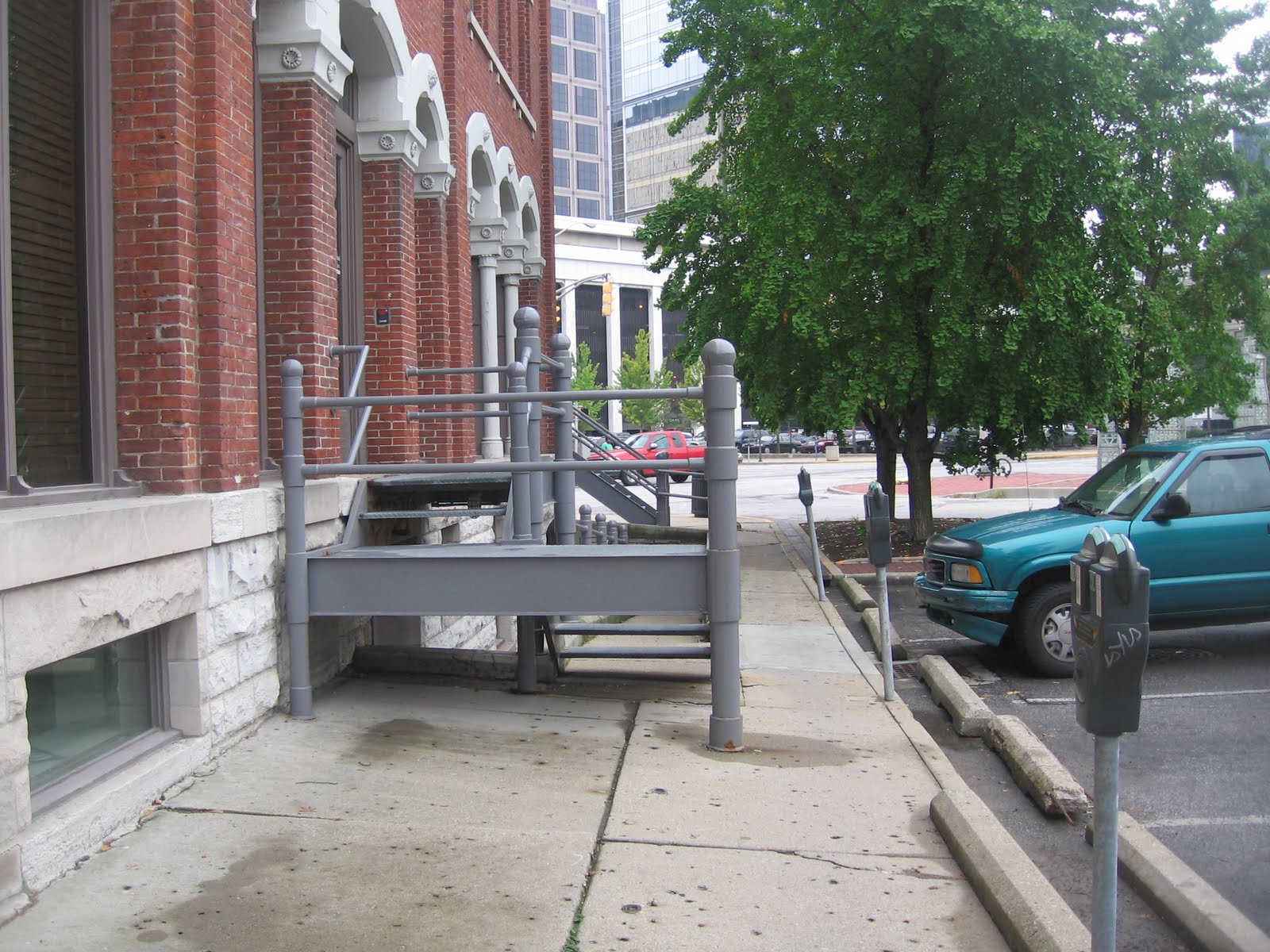 The stairs in the foreground provide an alternative access to the building’s first floor, in compliance with fire codes. And visible through the gaps in between the steps is the handicapped access ramp, leading down to the garden level basement. Here’s a closer look at that sidewalk and the adjacent ramp (obviously taken from a later time): 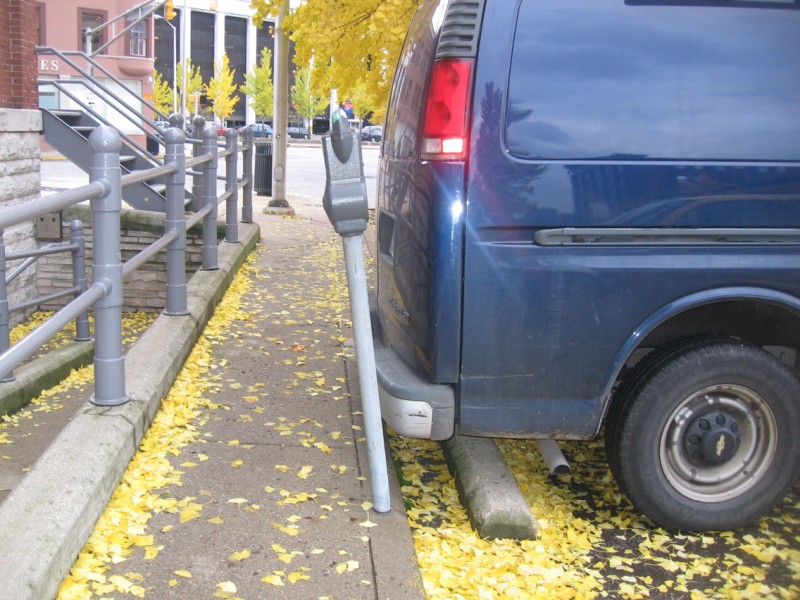 The fact that there are two separate entrances here suggests that these solutions to achieve code compliance were conceived separately, most likely at completely different times (and probably under different ownership). Was it really necessary to add a second door for the handicapped access, beyond the first door created as a fire escape? Why not just create a ramp from the direction in which I am standing that meets up with the first-floor doorway, then alter the stairs so they provide access from the opposite side of this doorway, where the ramp currently stands? My suspicion is that this convoluted solution alludes to building’s placement within the Massachusetts Avenue Historic District and the owner’s desire not to impinge upon the building’s historic character any further.

The stairway and fire exit along the building’s side undoubtedly predate the 1981 historic designation, but how far back does it go? While it is possible that the fire exit dates from the building’s 1874 construction, it is unlikely: New York City had just begun regulating low-income residential housing a few years prior with the First Tenement House Act of 1867, which required fire escapes for every room. This early law did not set standards for commercial buildings, nor did it immediately disseminate to other municipalities, which typically began developing fire safety codes for commercial buildings at the turn of the 20th century. Thus, the side entrance to the Hammond Block Building was probably introduced years or even decades later, at a time when the edifice’s architectural merit was not yet widely recognized, which may also explain the jarring choice of material used to build the stairway. Reflecting upon the building’s façade, both stairways visibly clash with the weathered limestone that forms the rusticated base course, yet they match with one another. In all likelihood, the original stone steps met their demise concomitant with the introduction of the side entrance and its corresponding stairwell.

However, the entrance with handicapped access poses the bigger predicament here. When the National Park Service accepted the Massachusetts Avenue commercial corridor as a historic district in 1981, the Hammond Block undoubtedly entered the roster as a contributing building. ADA compliance did not become an enforceable law for nine more years, allowing the building’s owners (which were then, as they are now, the law firm of Price Waicukauski & Riley, LLC) to ponder how they could introduce handicapped access without compromising the architectural integrity any further. The National Park Service has provided preservation briefs on how to integrate disabled access into historic buildings without compromising their integrity. Only a select few properties—generally the 3% of properties on the National Register listed as National Historic Landmarks—are deemed of such indisputable historic significance that they can enjoy complete exemption from ADA compliance, and the stewards of these properties still must demonstrate that any alterations would irreparably damage the historic character. The Hammond Block building, while historically significant, is hardly a National Historic Landmark, and the owners needed to find a way to introduce disabled access as delicately as possible. Clearly they wanted to avoid the visual blight of an incompatible material such as the one used for the stairways, but does the finished result work? 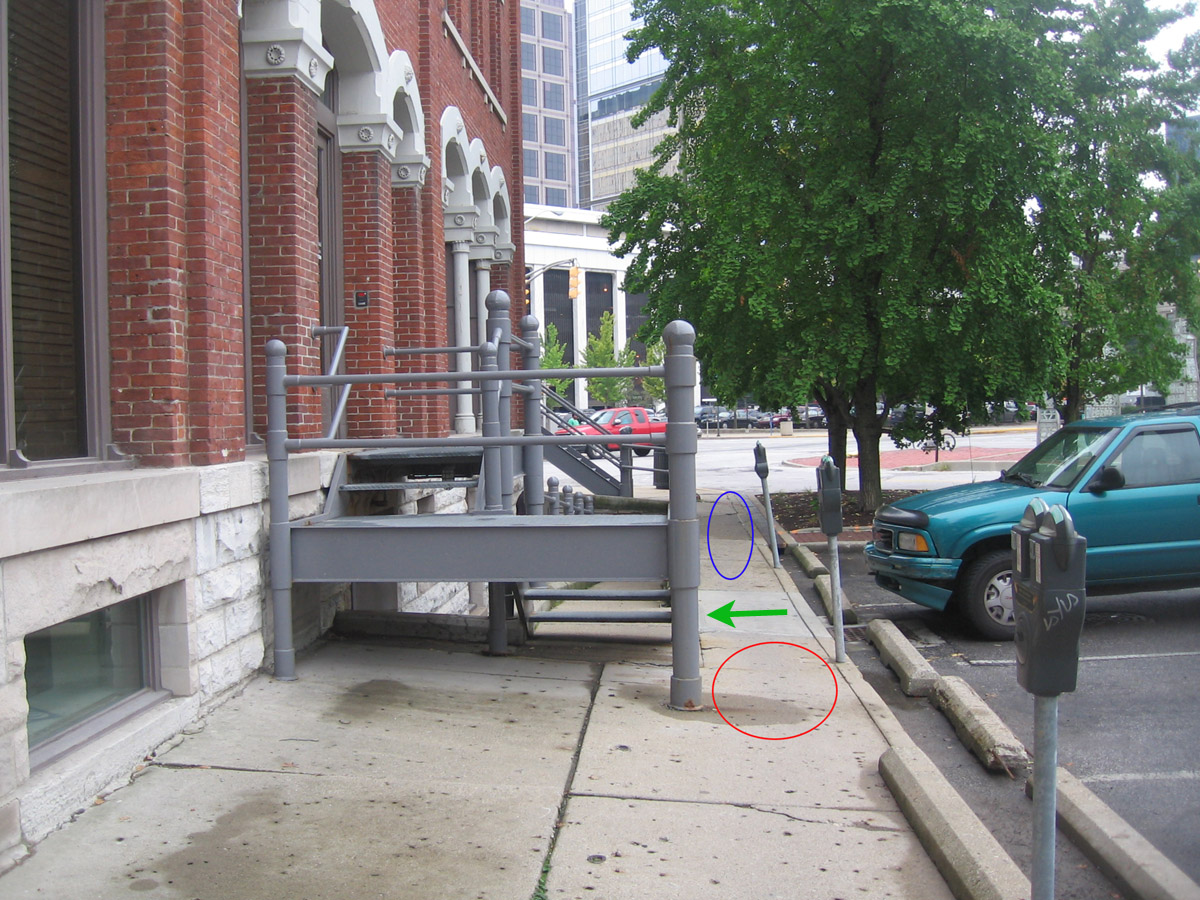 I’m not convinced. The entrance to the ramp sits right on the concrete slab indicated by the green arrow. But the clearance at the space indicated by the red circle is not wide enough for two people to walk shoulder to shoulder and would prove burdensome, if not impossible, for many wheelchairs, especially due to the obstruction caused by the parking meter. Approaching from the other direction (indicated by the blue ellipse) works better, but the turn radius on the narrow sidewalk around the area of the green arrow is still so small that it could pose problems. And any wheelchair approaching this building from the perspective of this picture will likely have to enter the street and come around from the opposite direction to enter the HammondBlockBuilding. Here are pictures, taken more recently, that show this same entryway from the opposite end (standing approximately at the location of the blue ellipse in the previous picture). 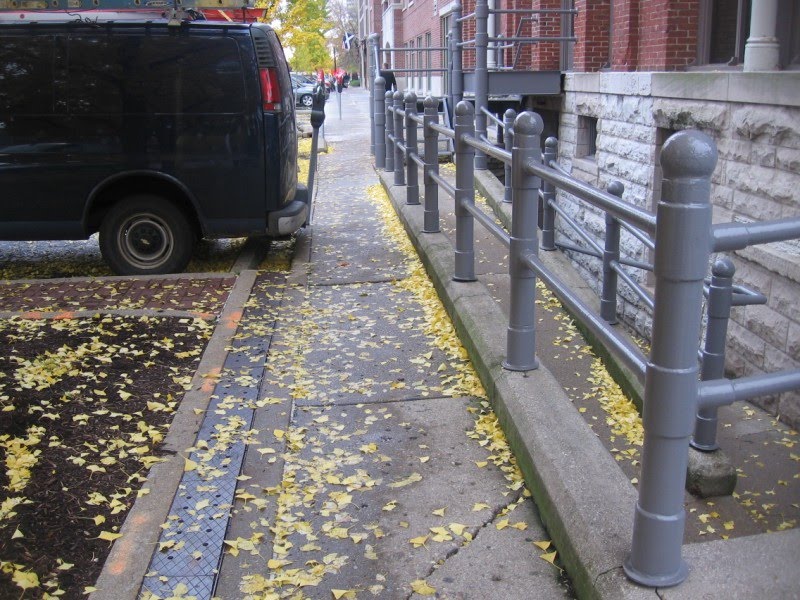 What would have been the alternatives? Widening the sidewalk would most likely have been all that was necessary, because the actual ramp most likely had to meet ADA dimensional standards. But sidewalk widening is no small matter, and could clearly impact the provision of the adjacent off-street parking if it encroaches upon that space by even a few inches. Other options would have been a long, continuous ramp leading down to another garden level entrance, instead of the two-tiered, hairpin turn afforded by the ramp visible in the photograph. But I am standing close to the edge of the building, so the available clearance for a ramp of the correct gradient most likely is inadequate. Insufficient space may also have prevented the owners from providing an incline ramp to meet at the top of the stairs, allowing handicapped access to the first floor, aside from the visual clutter this would add to a handsome historic building. Perhaps simply removing the parking meters would provide the necessary clearance, but until the City revamps its metering system as it has proposed and deferred for several months, the current configuration will stand for quite some time.

What we see is the resultant deadlock, and this is likely to remain the best of several bad solutions. Wheelchair users can only use the sidewalk from one direction, and even that approach is precarious. None of this would have happened if historic preservation and accessibility for the disabled didn’t become unintended ideological adversaries, but neither is going to supersede the other in its influence on the built environment, and the disharmony between the two rears its head in isolated incidents across the country. The Peterson House—where Lincoln died, across from Ford’s Theatre—will forever remain inaccessible to wheelchairs, while handicapped visitors seeking access to the St. Charles streetcar line in New Orleans will have to find other means of getting around. The HammondBlockBuilding is a comparatively unobtrusive example. Though this is largely due to the fact that the building is not a major tourist attraction, it also survives because the Americans with Disabilities Act and the National Park Service’s historic district designation reached an ungainly but workable compromise. As legislators and city administrators continue to push the built environment to improve accessibility for a broader array of persons with disabilities until it achieves true universal design, these sort of collisions will only intensify. The solutions should get increasingly creative—as well as more effective.

PrevWindblown bronze.
Chicago keeps Carless Joe out of his own park.Next