The true harbinger of social meltdown in New Orleans.

Our original intention for taking this photo while in New Orleans was to vindicate ourselves in case we were ticketed for not paying for our off-street space in a private surface lot. But it also proves useful for another musing on the necessity of parking, and the implications of free parking. 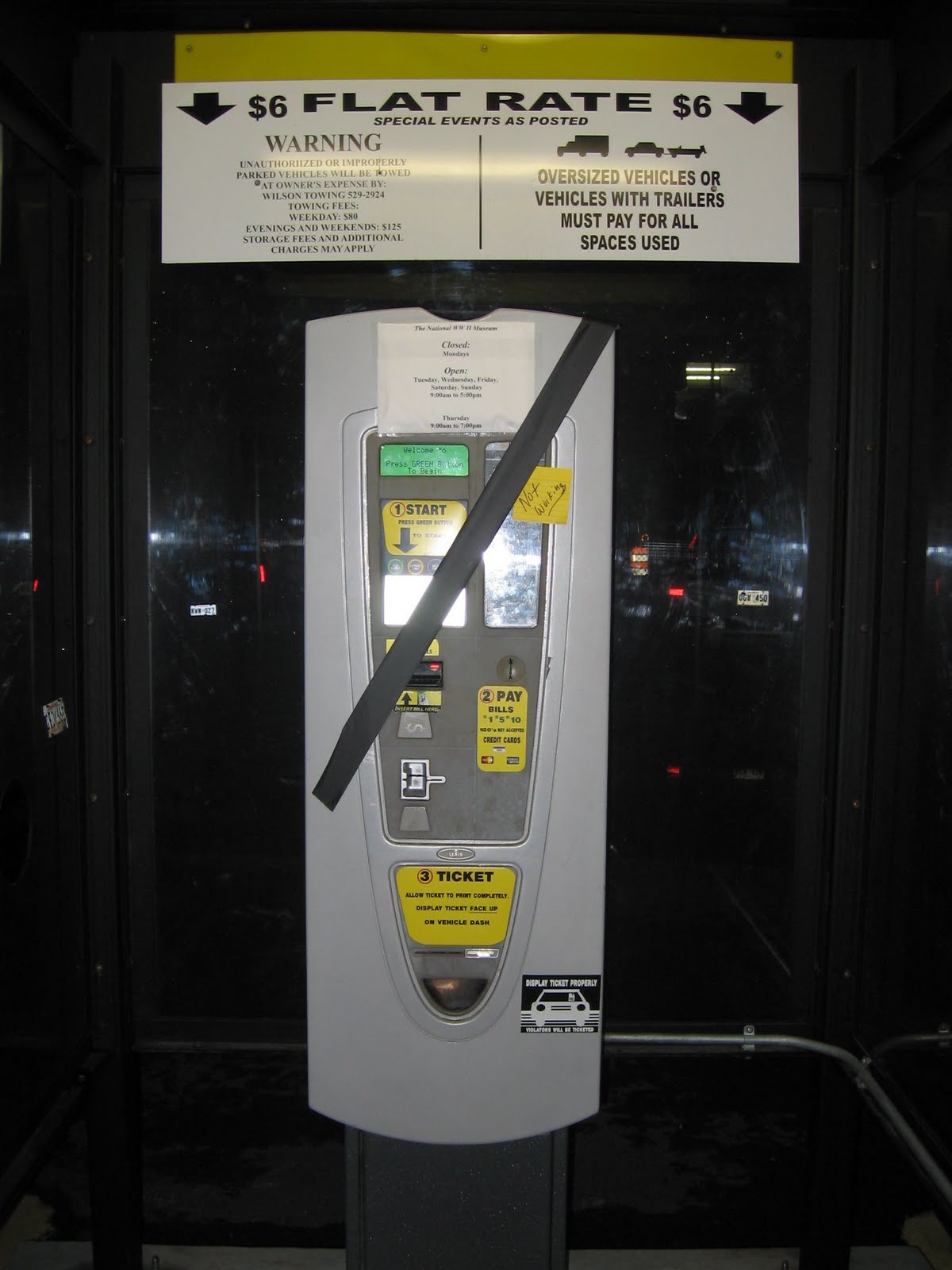 Yes, it’s a private, self-service parking meter. And the black slash is nothing more than a long strip of duct tape. The only other indicator of this meter’s functionality is in a post-it note: 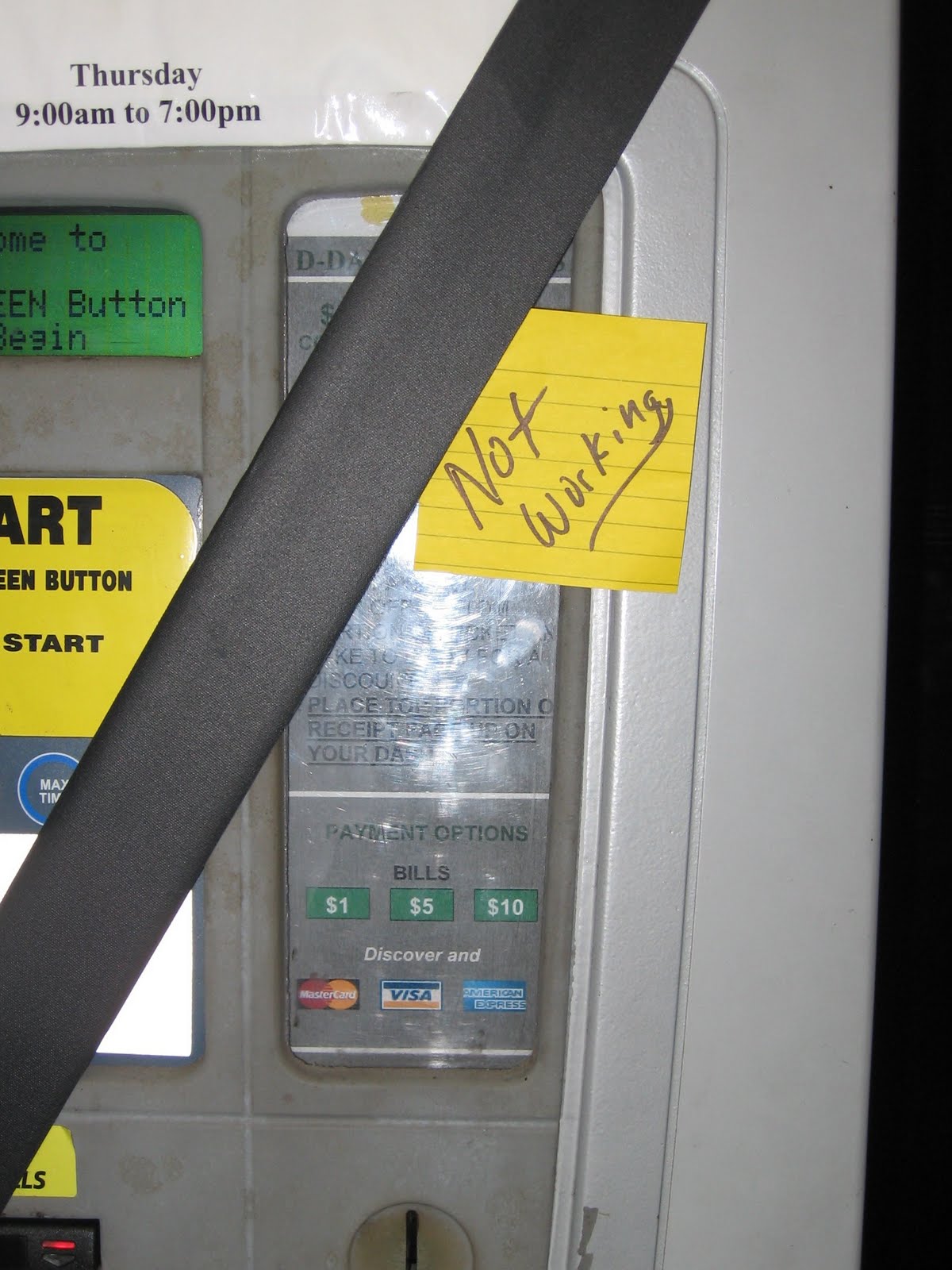 No doubt this happens all the time, just as we routinely encounter on-street parking meters (serviced by their respective cities) in a state of disrepair. The CBD of New Orleans and its adjacent Warehouse District (philosophically an extension of the function of downtown but without the high-rise buildings) boast considerable nightlife and evening activity in the areas closer to the Mississippi River, while five blocks away from the river the activity dies completely. Not surprisingly, the lifeless area of downtown (centered around Rampart Street and O’Keefe Avenue) is rife with surface parking lots, frequently occupying an entire street block.

On a busy weekend night in New Orleans, on-street parking is extremely difficult to come by; it’s free, of course, when the city meters have stopped running. Parking garages typically rank a distant second in their appeal: aside from the inconvenience of ascending or declining several floors before finding a spot, the motorist is almost definitely going to have to pay. Meanwhile, off-street surface lots barely register on the radar is viable parking places at night. Why? Most of them are privately managed and reserved for daytime commuters, and quite a few simply aren’t available after hours. My guess is that the volume of parking on surface lots is not great enough to build the sort of revenue that would justify hiring a parking attendant for a night shift to manage the costs. Parking garages, which stack or sink so many extra layers of available spaces onto their patch of downtown land, can support a far better infrastructure for regulating and staffing the valuation of the property. In addition, they have far more limited means of ingress and egress, so it would be particularly difficult for a motorist to sneak out of a garage without paying. Unless surface lots have gates, it’s not so difficult for a motorist to cheat. So must owners of surface lots simply keep them off limits.

But there are the exceptions, and this lot, servicing the National World War II museum, is available at night. And in this instance, a poorly maintained automated attendant gives motorists a triple reward: a) off-street parking so it’s protected from errant drivers or pedestrian vandals; b) surface level so there’s no hassle of walking up or down a flight of stairs to get to one’s space; c) and in an area with high density of parking demand, it’s free! It’s as good as the suburbs! And my original three heuristics for seeking parking, mentioned in an earlier blog post, still applies: close parking is good but cheap parking is better; time and distance are less important than stalking that coveted cheap spot; time and distance cease to have any significance whatsoever if the spot you find is free.

In the case of the above photographs, we had exhausted all three heuristics. We weren’t even seeking free parking at the time we found this spot; it just happened to be our luck. And we were never questioned for violating the rules, so essentially the broken automated parking attendant was our get-out-of-jail-free card. If the machine hadn’t been shrouded in the darkness of night, I’m sure plenty of others would have caught on, though at the time that we parked there, only a select few other motorists had noticed this terrific opportunity.

Self-service parking meters, both the city-managed on-street variety and these private off-street variants, are not exactly a realm in which New Orleans seems to excel. This is to our auto-dependent population’s advantage, and does nothing to help the case for transit in this relatively dense, pedestrian oriented city (at least for the south) that also boasts an abundance of wide, multi-lane boulevards. Hurricanes notwithstanding, traffic generally flows comparatively freely in New Orleans, and if it weren’t for the fact that the city and state frequently have the worst condition of roads in the country, it would probably rank as the most relaxed city to drive despite the fact that the majority of the development patterns pre-date the automobile. They don’t call it the Big Easy for nothing.

But where does that leave the population seeking the nightlife of the Warehouse District or the nearby French Quarter but too lazy to take one of New Orleans’ classic streetcars to get downtown? They follow the classic pattern of looking for parking: first where it is on-street and typically free because the meters are no longer in effect, then where they have to pay (the cheaper the better). We as Americans—but probably we as humans—have an embedded ideation that unconsciously hones in on free parking. We crave it. And yet, because surface lots such as these so rarely accommodate evening parking, the average local New Orleanian will complain about how hard it is to find parking on a weekend night. (Translation: it’s hard to find free parking.) Such a claim is only ridiculous because the ocean of surface lots at Rampart and O’Keefe are both off limits and far from most of the nightlife. But what about a city that really does have a shortage of parking—where the aggregate number of lots is genuinely dwarfed by the number of drivers seeking parking downtown? Does such a city exist in America? Perhaps a case could be made for New York, and Manhattan most specifically. I wish I had followed-up on the New Orleans scenario to see how long this automated parking attendant stayed broken. If this situation occurred in Manhattan, where a broken machine created an opportunity for free spaces in one of the island’s few surface lots, it genuinely may precipitate a widespread social dissolution. But chances are it would be short-lived: such sought-after land would command far too high a price for the management to let their little machine stay broken for long. Then again, they probably would get enough revenue to afford a real, human parking attendant, even for the tiniest of lots.