The Berlin Wall of housing tenure.

The title to this posting is an obvious exaggeration, because what you see below is hardly a wall; it is not impervious, and people who pass it do not risk being shot. But it is a barricade to a right-of-way on a road in the suburbs of Indianapolis that was formerly completely accessible but has not been for a few years now. 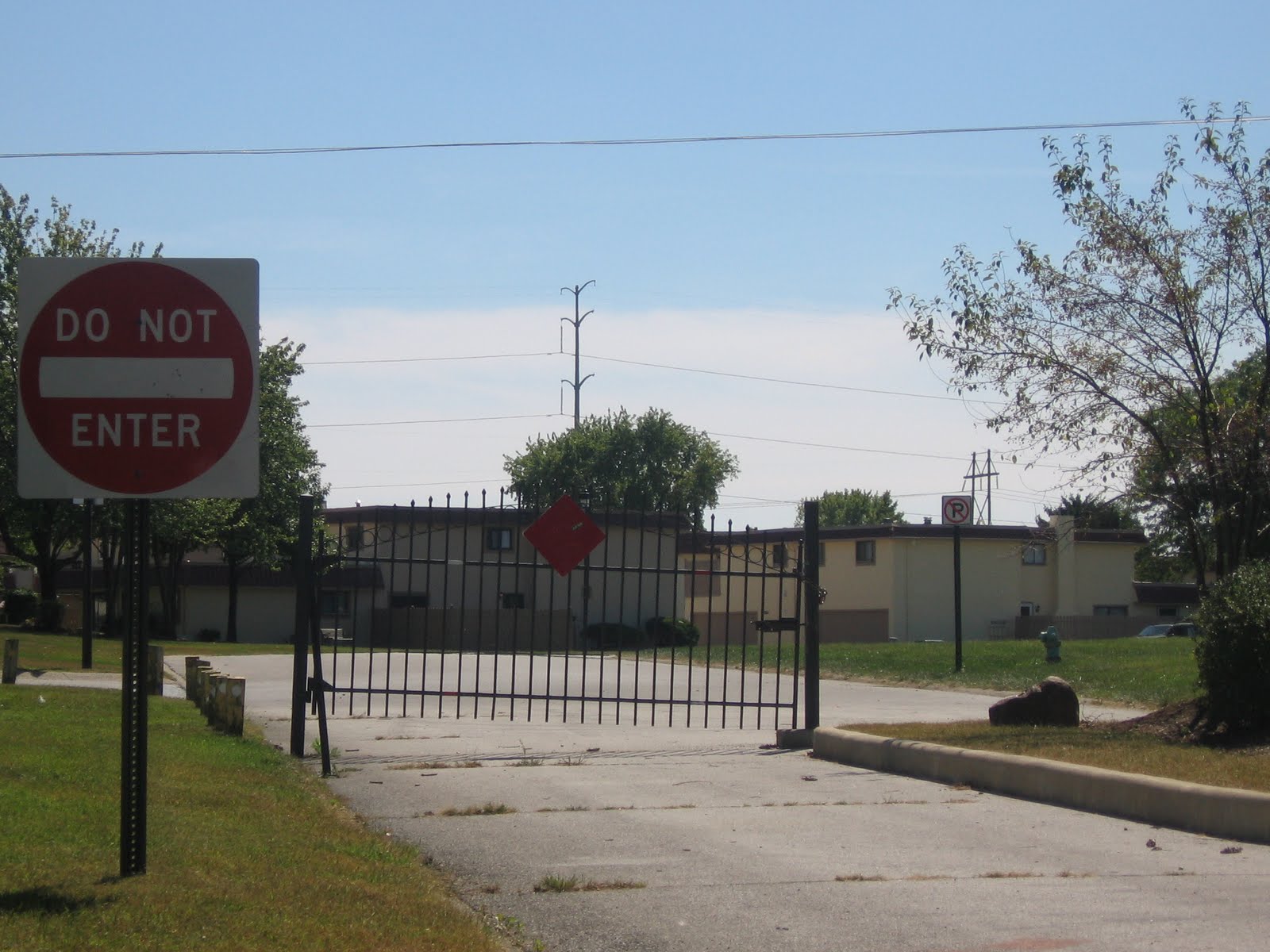 On one side of the roadblock—the side visible beyond the gate in the picture—sits Casa de Prado, a series of low-rise, attached condominiums using a heavily diluted variant of the Spanish colonial style, though about the only features it preserves are the clay tile roofs and flattened walls intended to look like stucco. The appearance is irresolutely suburban, from the residential space built above two-car garages to the small fenced-in patios that overlook green arteries of shrubs, trees and turf. 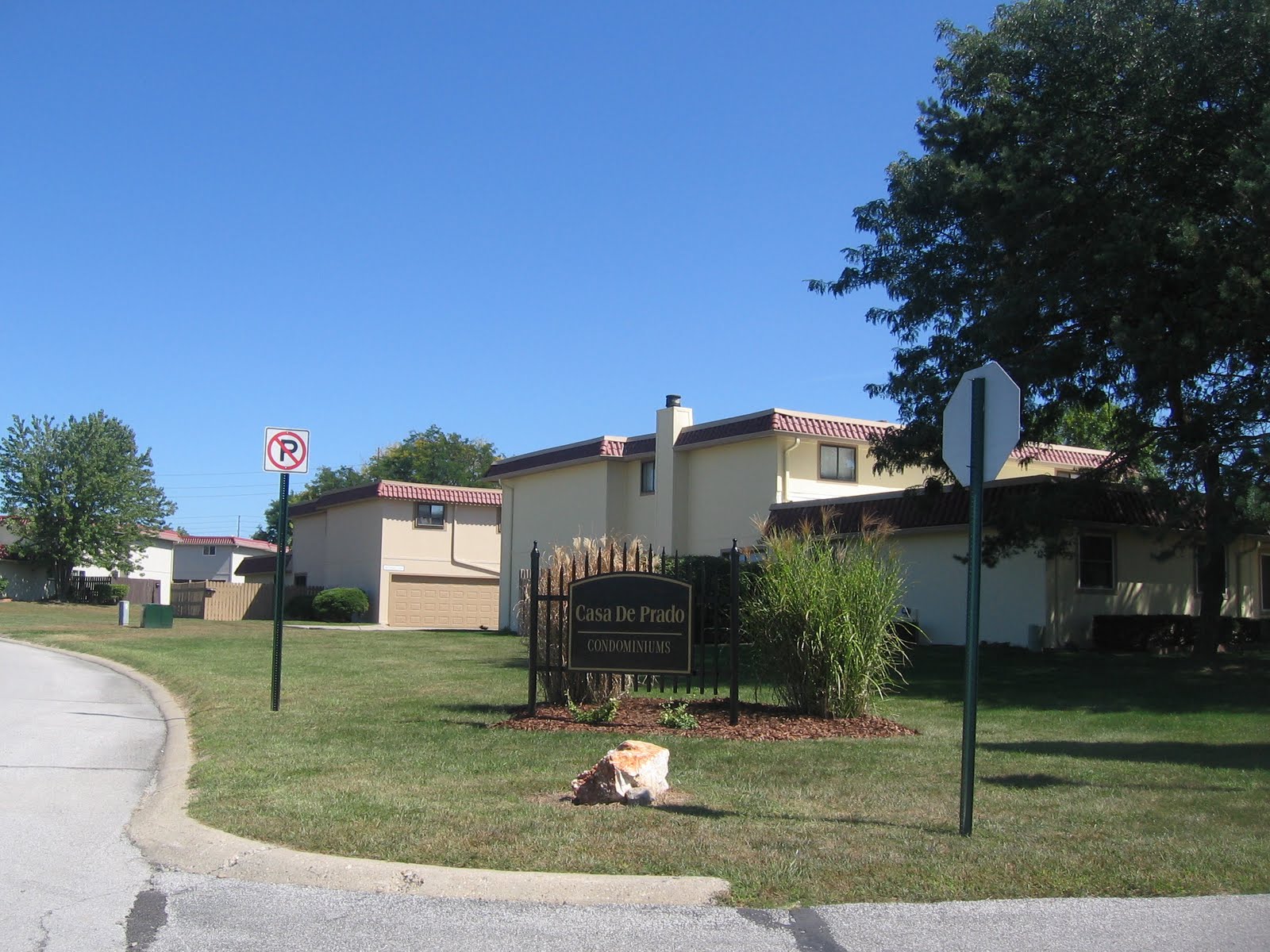 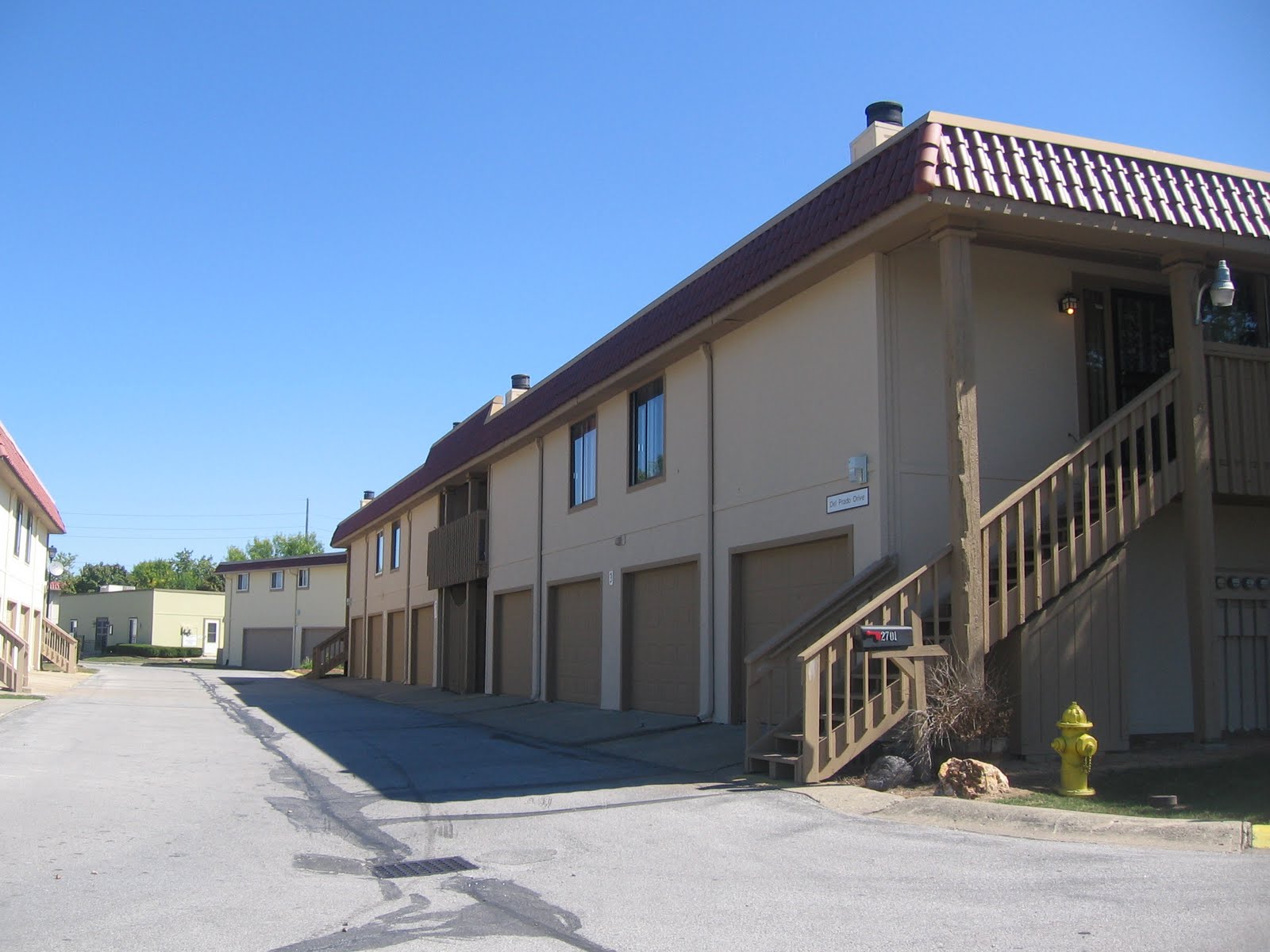 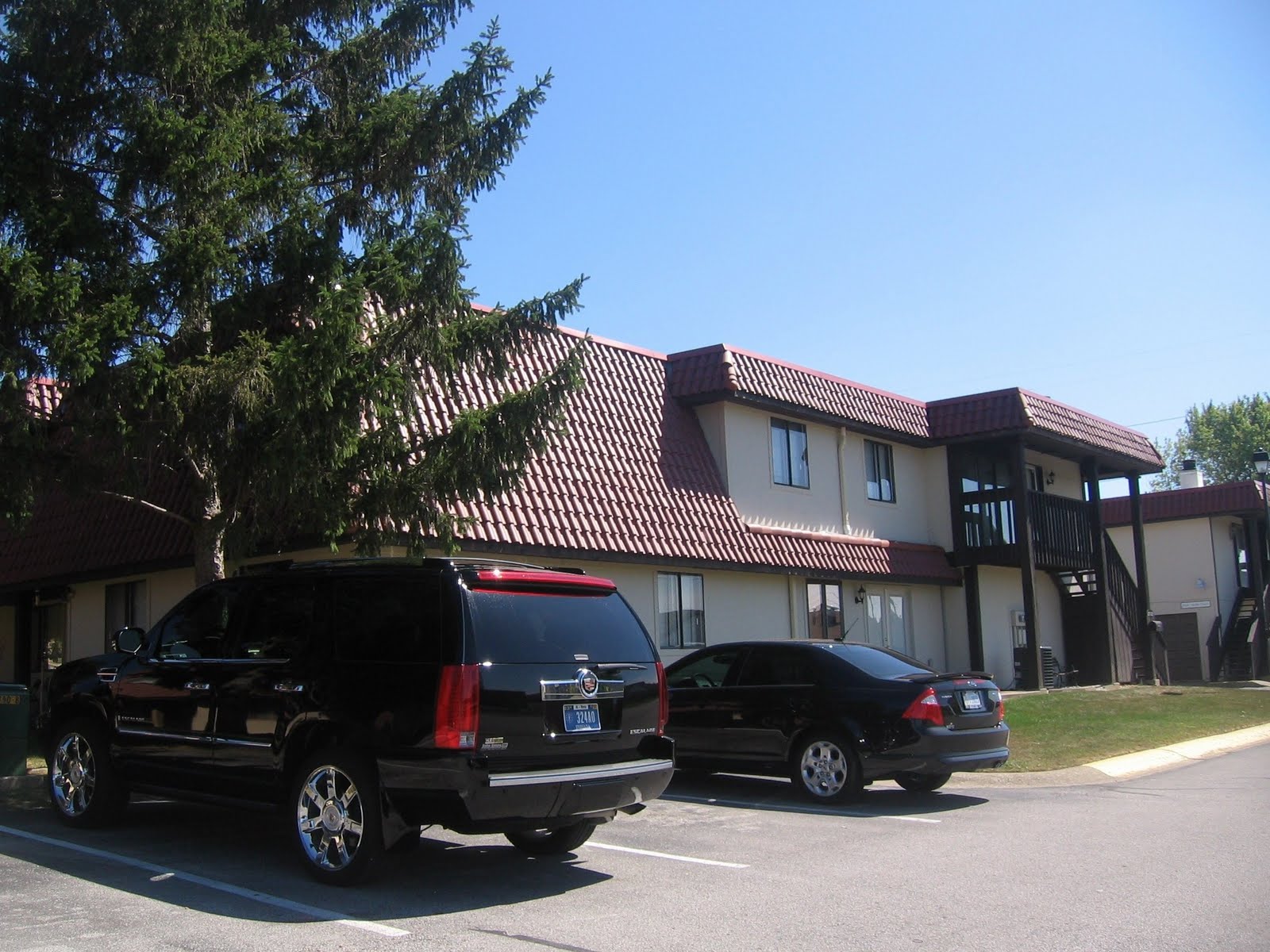 On the other side of the roadblock sit Berkley Commons, another series of low-rise buildings, this time in a simplified Federalist style with front entries allowing access to a cluster of units, typically four per doorway. It is a suburban typology from the late 1970s and early 1980s that is ubiquitous across the Midwest. Unlike Casa de Prado, however, these are apartments, and they feature no covered parking. 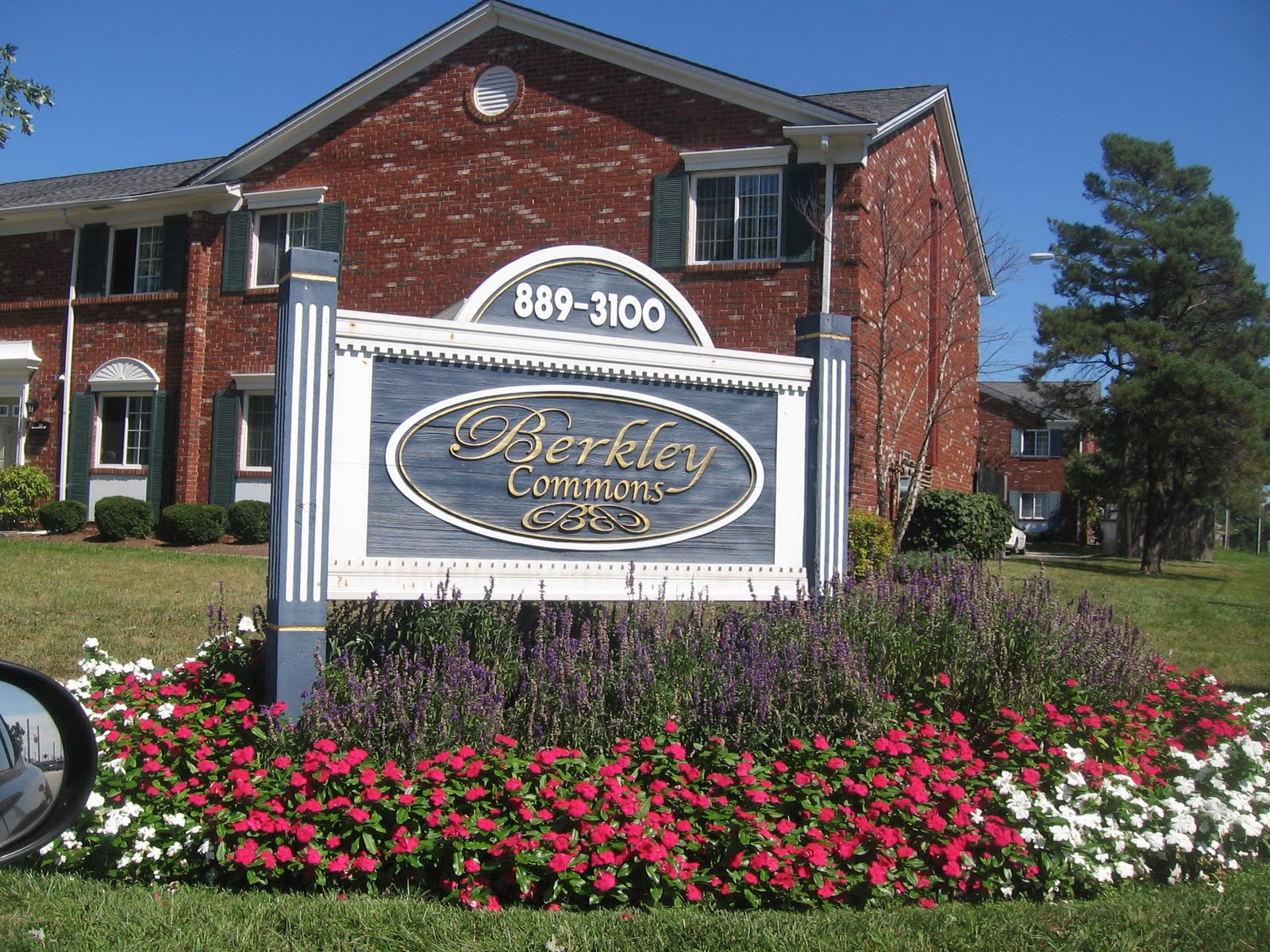 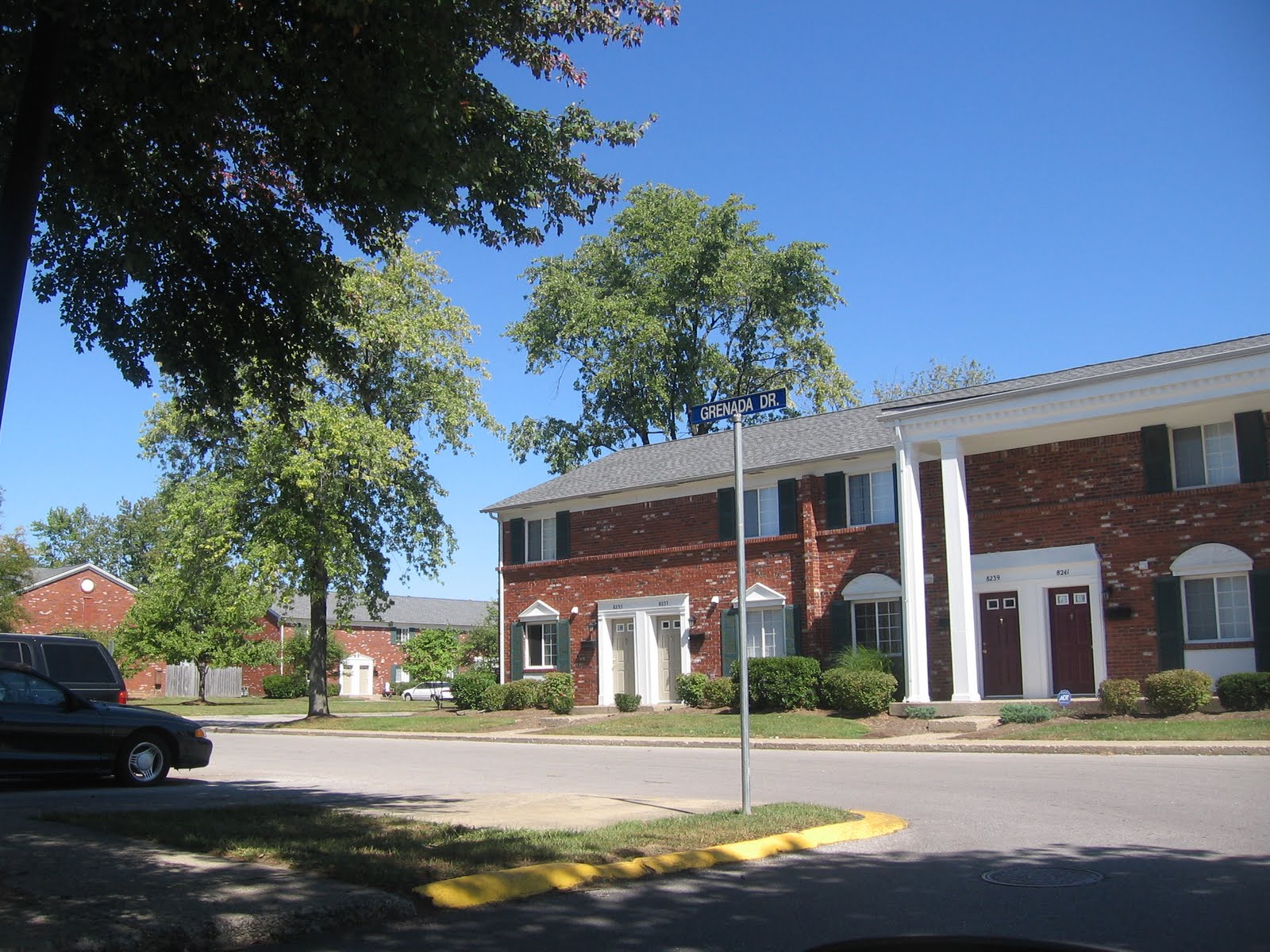 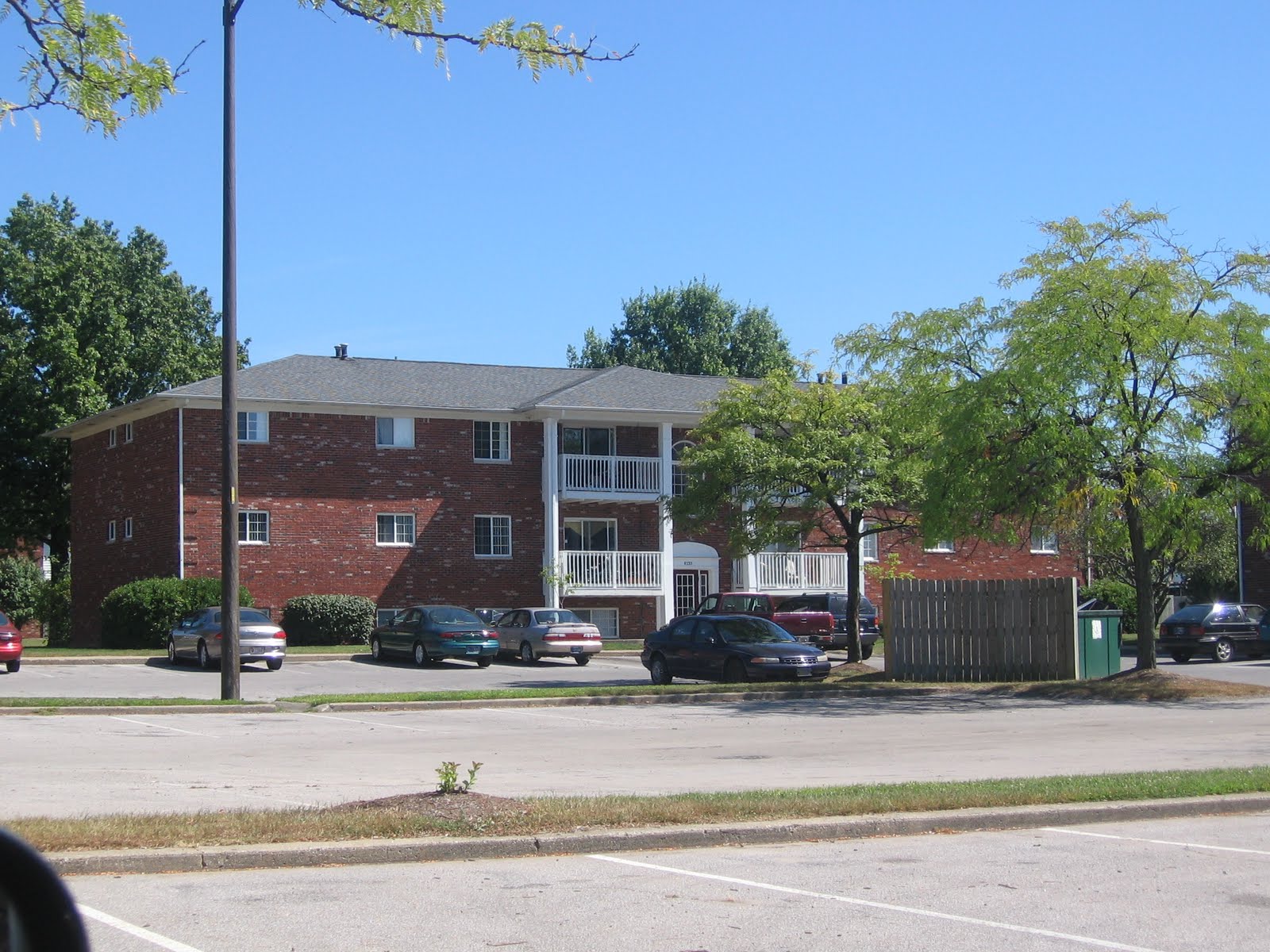 The road with the wrought iron gate and large planting strip is Siear Terrace, which originally existed as a thru street connecting the two developments while also providing a link between two other arterials, Madison Avenue and Stop 11 Road, which intersect more or less perpendicularly, at a spot with restaurants, gas stations, and a few relatively busy strip malls. Here’s a view from afar: 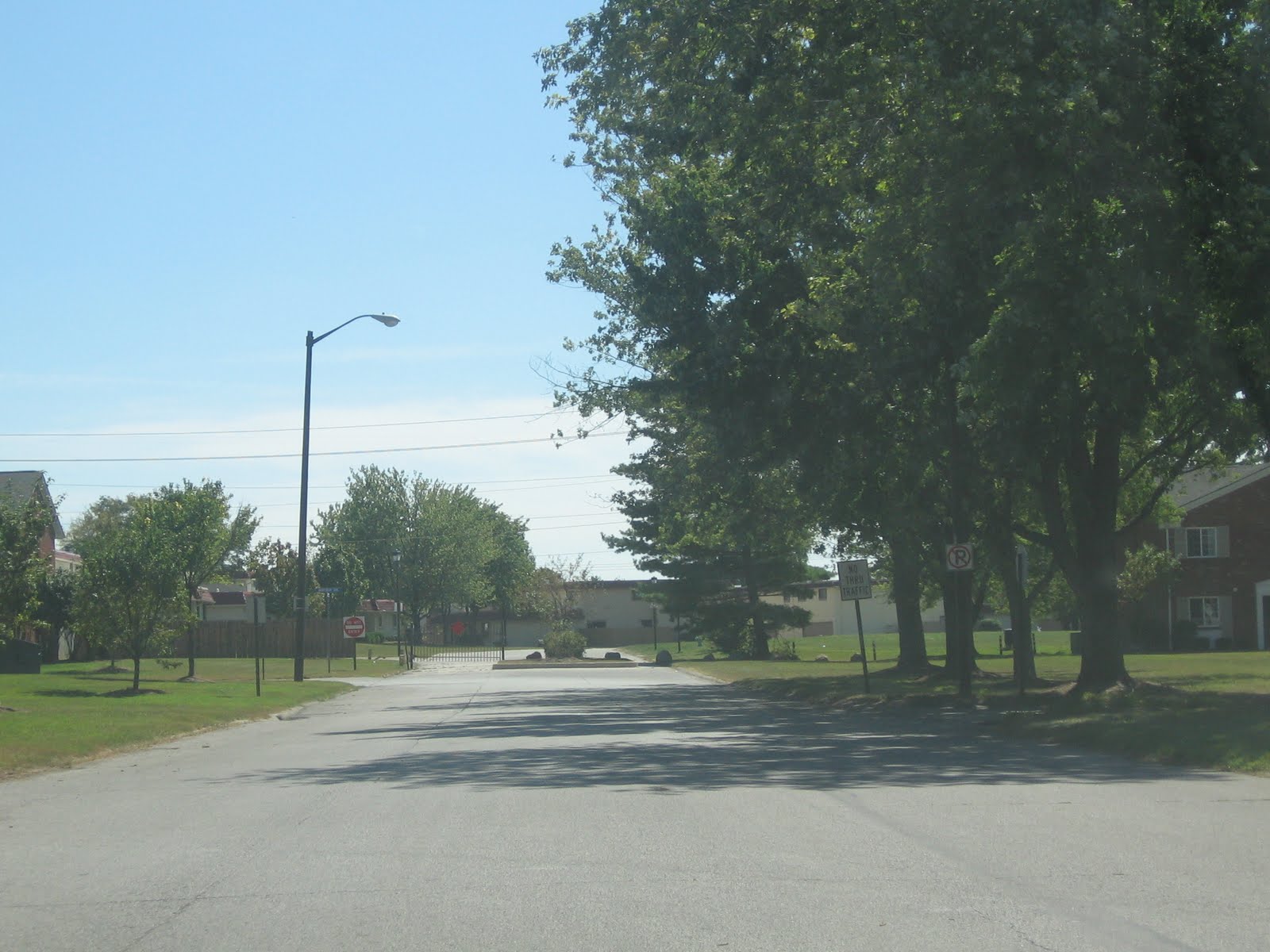 Looking at the roadblock a bit more closely, one can draw a few better conclusions as to why it was built. Here’s the view from the other side, standing at the Casa de Prado and looking onto Berkley Commons. 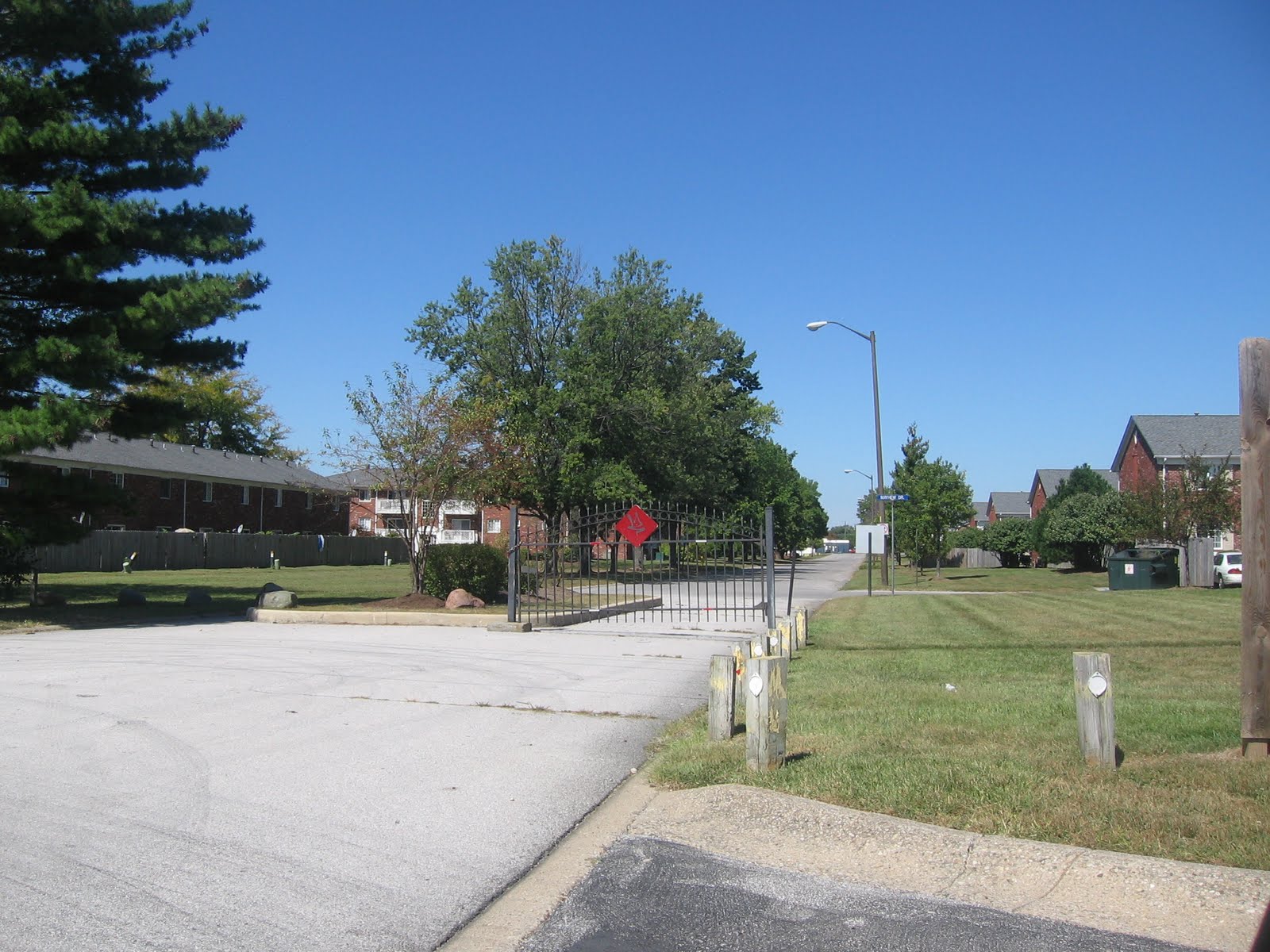 I know from memory that it didn’t always exist there, but, having lived away from Indianapolis for more than a decade, I do not know exactly when it was installed. If the plantings are any evidence, the roadblock is not likely more than a few years old: the tree in the median is only slightly older than a sapling. Of course, if it’s a recent planting, it provides no reliable indicator of the age. All I know is I used to be able to drive across the entirety of Siear Terrace, and that is now forbidden.

This memory offers a hint of an explanation for the roadblock. Looking at the map below, one can see exactly how Siear Terrace could be used to bypass the aforementioned busy intersection of Madison Avenue and Stop 11 Road, skipping traffic, lots of curb cuts, and a stop light. Siear Terrace is highlighted in a transparent red. 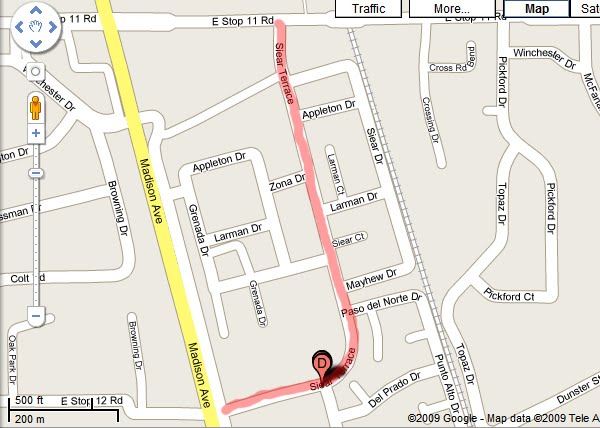 Clearly a roadblock would work wonders to stop motorists from using Siear Terrace as a bypass, which could have become sufficiently popular to attract uncharacteristically high traffic volumes (and high speeds) for a residential area. But speed bumps tend to be a far more popular palliative to high speed traffic, and they are already commonplace in most suburban multifamily developments, including the two shown here. If they slow traffic enough that it no longer saves motorists time to cut through, these drivers will abandon Siear Terrace in no time. Why did the powers that be decide instead to block the right-of-way altogether?

My suspicion is it has more to do with deteriorating relations between the two communities. Casa de Prado, as condominiums, are owner-occupied, with a generally middle class population seeking something smaller than the single family house and quarter-acre yard that seem de rigueur in this part of the city. My impression is that these condominium units tend to house one to two persons and are typically white middle class.

Empirical observations may a weak basis for a rationalization, but if that were always the case, someone should have shot down this blog a long time ago. The fact is that demographics for Casa de Prado differ greatly from Berkley Commons, which comprises renters, of which about half or more are non-white. And it doesn’t take more than a pair of eyes to realize this. I could use the 2000 U.S. Census at the block level to get more precise assessments, but my suspicion is that they would not do a great deal of good: most of the changes to Berkeley Commons are recent. For example, Berkley Commons follows a trend I have observed in the past of suburban apartment complexes changing names—more than a decade ago this complex was called Charleston South. The name change of this and many other apartment complexes echoes an overall shift in population of renters in this area of the city, much of which developed in the 1970s.

Most casual observers would surmise that Berkley Commons is in perfectly good shape. But standard depreciation schedules place apartments at 27.5 years for taxation purposes, which pretty closely aligns with the age for these structures. Thus, by apartment standards, they are old and no longer top-tier or Class A rentals. Apartments depreciate quickly partly because of the nature of tenure—renters do not own and have no real incentive to promote the upkeep of the property. This is hardly rocket science. So while it is possible the units have deteriorated from repeated shuffling of new tenants, particularly if property managers did not make full use of the deposits for maintenance or upgrades at the termination of a lease, it is more likely that the facility in totality is old: aging washing machines, cabinetry, sinks, vanities, and so forth. Customers’ tastes for the way residential space is organized have also evolved: most people prefer a domicile with large, capacious rooms, often where the kitchen, dining room, and living room have no partitions. Such was not the case in the 1970s, when rooms tended to be smaller and served more discrete purposes. Most property managers of non-luxury units are not likely to invest only occasionally in capital improvements that involve major appliances (i.e., fix the stove and dishwashers when they break), and will invest practically never in structural changes such as the removal of walls.

Thus, Berkley Commons is now a second-rate apartment complex, commanding lower rents and attracting a less affluent clientele. In a fast-growing metro area with a burgeoning immigrant population such as Indianapolis, that means the majority of population seeking leases at these complexes are either African Americans, or recent immigrants, which on the south side of Indianapolis typically means Latinos, Punjabi, or Burmese.

And the roadblock is a physical manifestation for age-old demonstrations of racism or, more profoundly and intractably, classism. Casa de Prado houses established, comfortable, mostly white homeowners; Berkley Commons houses less affluent, transient persons of color. Twenty years ago, the two developments attracted similar customers, with the one difference being tenure, but those demographics have diverged greatly in the past decade or so, with the rental units absorbing all the change. Perceptions of crime may or may not be inflated by knee-jerk, prejudicial associations with ethnic otherness; regardless of whether or not crime has increased in the area, the gate and planted median in the middle of the road serve the dual purpose of preventing motorists from using Siear Terrace to cut through while discouraging pedestrian movement between the two. It’s clearly more polite than constructing perimeter gates around the two communities, not to mention cheaper. In this capacity, the residents of Casa de Prado could have couched the need for a roadblock in terms of speeding cars, thereby shifting the burden of keeping unwanted neighbors out away from their own homeowners’ association costs to that of the Department of Public Works, who clearly manages this shared right-of-way. Thus, all taxpayers of the city helped fund this roadblock. And it only serves as a tame warning banner to the lower-income residents of BerkleyCommons rather than an outright barricade, since pedestrians still have complete freedom to walk around it.

It would require an inappropriate level of investigation on my part to determine the real reason for the installation of the roadblock, and I’ve already waded through hearsay about how the area is filled with drug deals and whatnot. I don’t want to castigate the residents of Casa de Prado: as homeowners, it is natural that they want to protect the vested interests they have in the area, whether that involves speeding cars taking unfair advantage of a shortcut street, or keeping the always-shifting demographic at Berkley Commons—and potential crime—at bay. It is understandable in this case that taxpayers would be funding public safety, and all the better that the monies invested may serve a dual function. But I don’t know what the future holds for Siear Terrace and the two multifamily developments it serves: right now Berkeley Commons shows no visible signs of deterioration and it feeds into a satisfactory if not exceptional school system. Should the demand for housing in this area decline, the apartment may fall another tier lower in desirability, regardless of any improvements the property managers attempt to make. It will be difficult to salvage such an area if only the extreme poor choose to live there (for lack of other choses), and Casa de Prado may then rely on more draconian means of keeping out strangers. The barrier currently bears no resemblance to a Berlin Wall—if it intensifies in the future, it reveals nothing about motorists cutting through (that’s essentially already impossible now) and everything about perceived criminality from socioeconomic difference.

2 thoughts on “The Berlin Wall of housing tenure.”