Pounding what little there is of the pavement.

My fascination with pedestrianism and the perspective of the walker along city streets extends to what most would consider tedious, minute details. But I have tried to follow every gesture in favor or against the pedestrian landscape that has transpired, both legislatively and from the private sector, over the past few years in Indianapolis. The city thankfully upgraded its sidewalk ordinance last year to something far more intensive, requiring sidewalks along all public and private rights of way for any new development, be it residential (multi and single family), commercial, industrial, or special and exceptional uses, as well as any renovations, alterations, or expansions to existing structures. An effective summary of the document can be found here, while the actual amendment, overwriting portions of Sections 731, 732, 733, and 735 of the Revised Code of the Consolidated City and County, is available at the Metropolitan Development Commission’s website.

While the ordinance is a welcomed and long-overdue improvement to the previous standards, it doesn’t take long for the scrutinizing motorists or walker to spot one of the new developments and its blatant failure to observe the standards. The south side of Indianapolis, long the most rural and least pedestrian friendly part of town in the city, still enjoys the occasional new development (at least in good economic times), so first I’ll point out a success: Brookhaven, on Shelby Street near the intersection of County Line Road. 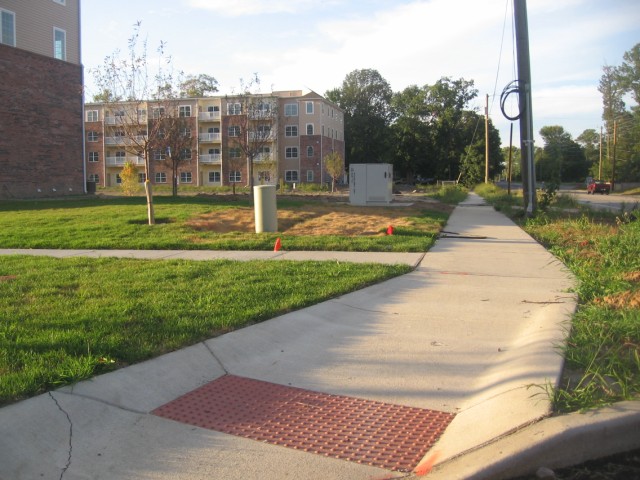 This surprisingly high-density multi-family development near the southern border of the city observes the enforced width (5 feet), ADA compliant ramps, Tactile Walking Surface Indicators, and a buffer of at least five feet separating the sidewalk from the verge of the road. The only thing I’m apprehensive about are the slightly slopped margins of the sidewalk as it approaches the curb, possibly causing some impedance for wheelchairs, though it should still allow the four-foot “minimum clear width” enforced in the ordinance. Looking at the other side of the access road in which I’m standing, one can see that the sidewalk terminates flush with the property line, as it should: 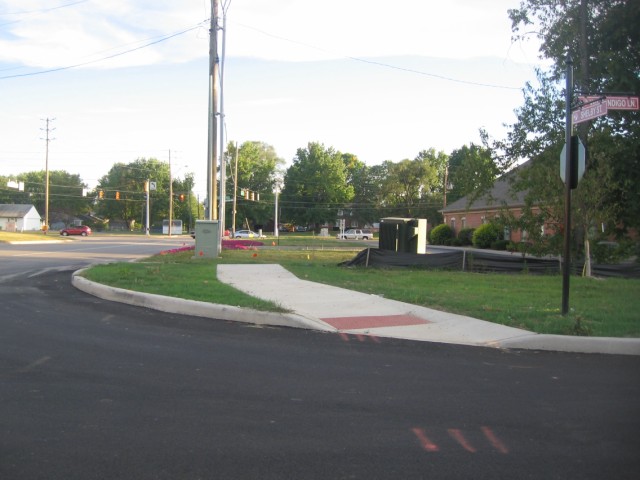 These developers have met their responsibility with the new amendment. Unfortunately, most of the other evidence of new construction on this side of town shows a frustratingly cavalier application of the sidewalk ordinance. For example, Stonebridge, a multifamily development closer to downtown, has a well-laid curved path covering about 80% of the property line along Banta Road that salvages the trees nearby: 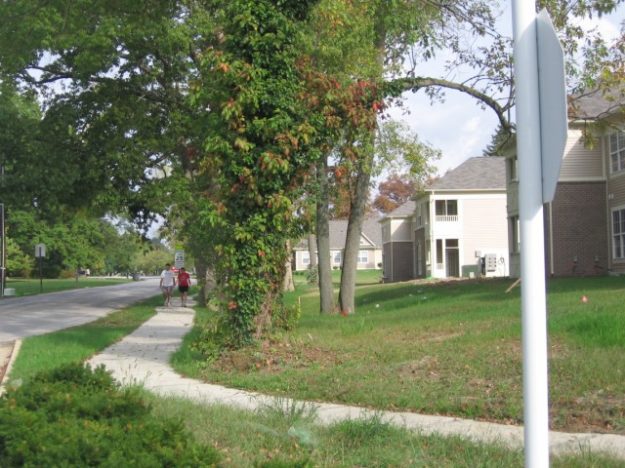 However, the path it carves ceases to parallel the collector street as it heads toward the entry of the apartment complex, allowing only for one direction of travel: 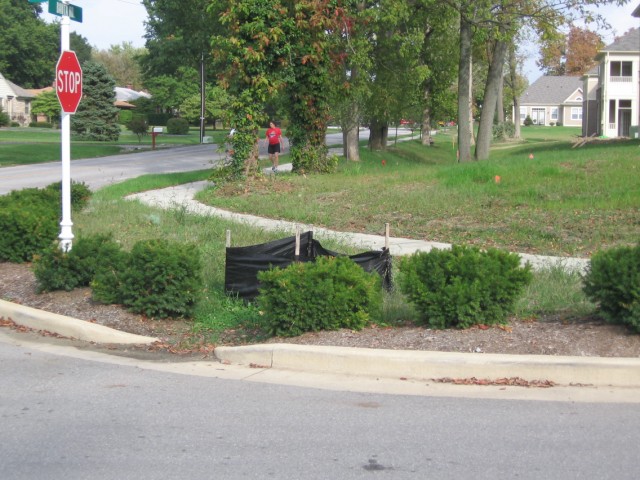 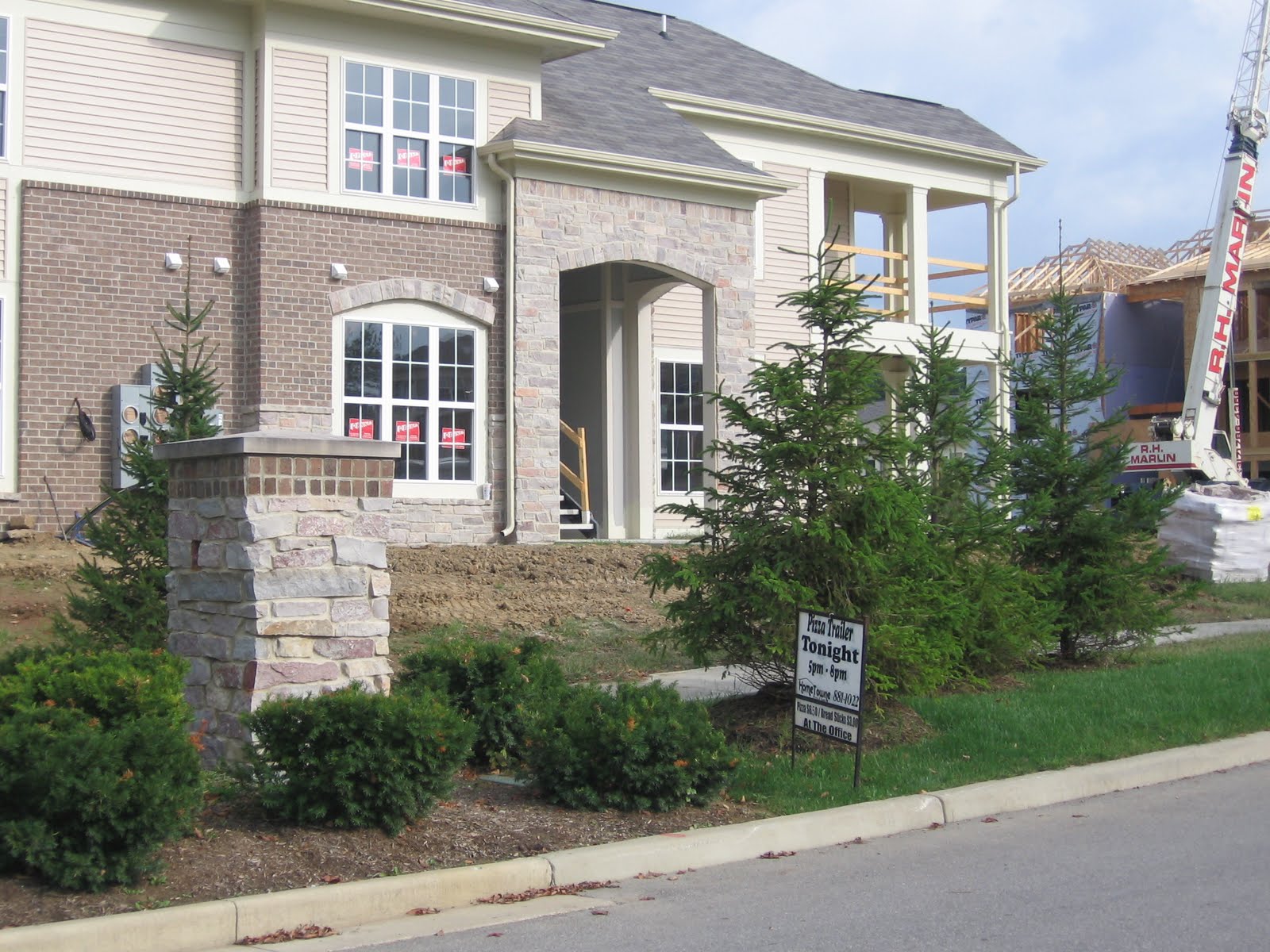 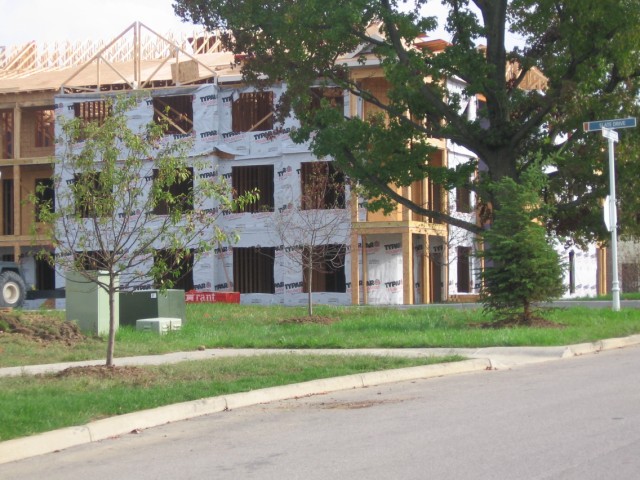 Why didn’t the site planners provide a curb cut for people hoping to cross the entry to the complex and continue walking along Banta Road? If I pivot 180 degrees, you can see that the design does not bother to include a sidewalk on this side: 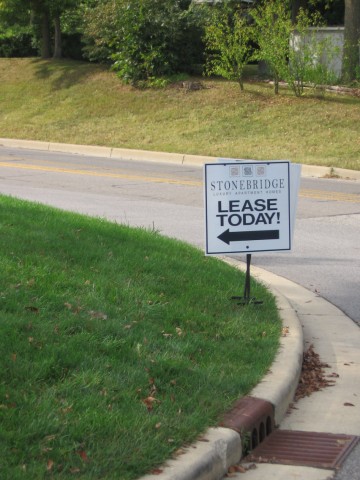 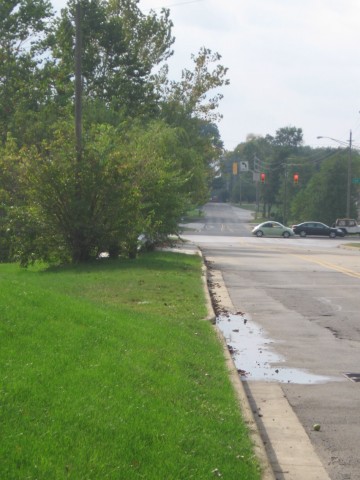 Looking into the distance along the left side of Banta Road, one can actually see where a bit of paved sidewalk picks up on its way to the busy highway, U.S. 31, where the stop light is. By why doesn’t the sidewalk for the Stonehaven development link up with this existing piece of pavement? And needless to say, the busy highway has no sidewalk, though I’ll withhold my criticism of the developer here because I’m not sure the parcel directly abuts this right-of-way.

A recent commercial redevelopment shows a similarly sloppy oversight. This one takes place farther north on the aforementioned Highway 31, closer to the downtown in an area that could easily be described as “inner ring”, showing serious signs of retail decline that may foreshadow an eventual economic decline of the entire area. The fact that a blighted structure was razed and an attractive if uninspired looking new strip mall was built is actually a boon to this neighborhood, regardless of the opinion one might have of strip malls. Here’s part of the shopping center itself: 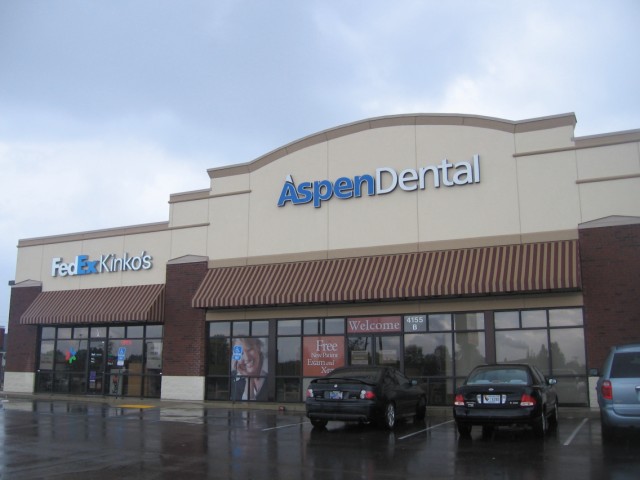 The site planner at least included the sidewalk along the Highway 31 right-of-way: 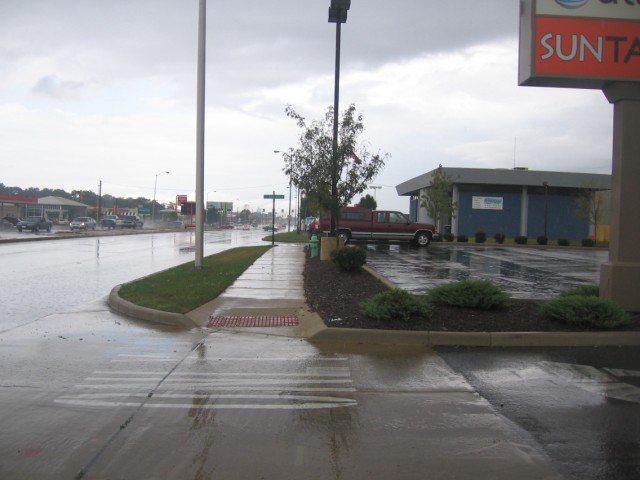 But this strip mall stretches across a full block, wedged in between two perpendicular intersecting streets, and the development does not include a sidewalk on either of these two sides. Here’s the intersection of U.S. 31 and Mills Avenue: 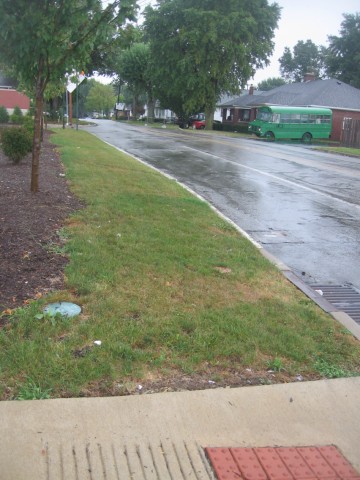 And here’s the intersection of U.S. 31 and Edwards Avenue: 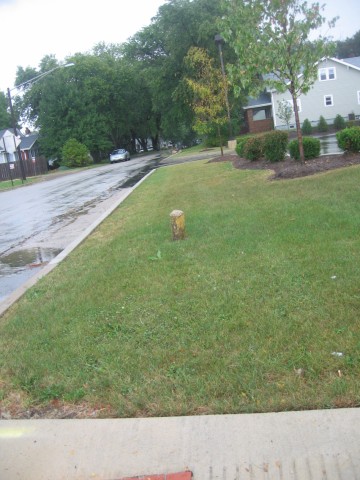 So this is the angle one sees of the strip mall standing in the cartway of Edwards Avenue: 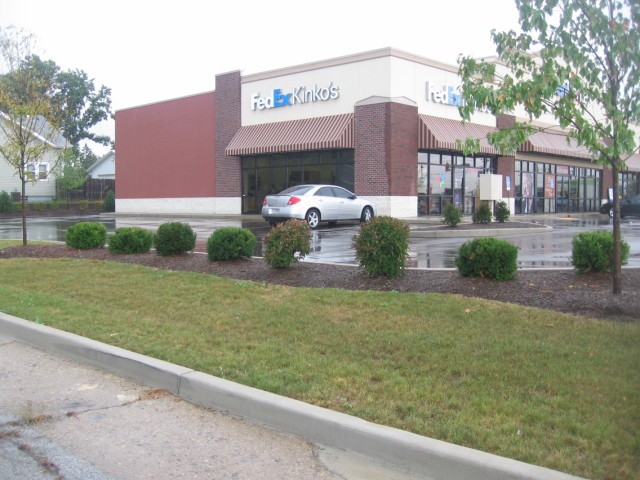 The site plan completely neglected perimeter sidewalks on two of three sides. A 33% usually qualifies as a failing grade.  The sidewalk ordinance gets an F.

But this last redevelopment proves the most baffling. Further south again along U.S. 31 and Stop 11 Road, an aging, long vacant Waffle House, if I recall, was demolished to make way for a tiny new strip mall, housing just three tenants. 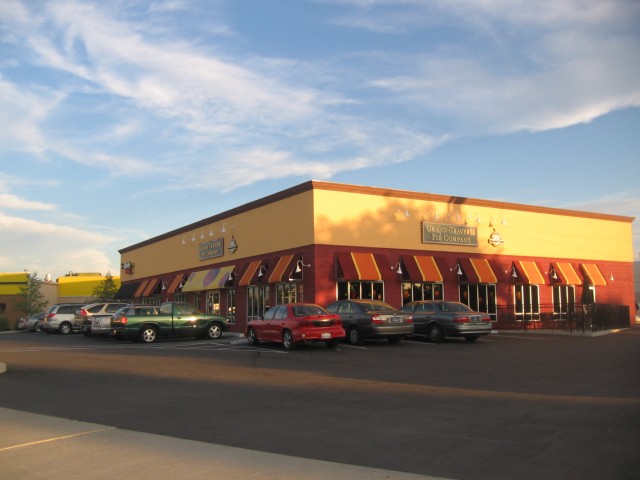 Stop 11 Road at this location already had a sidewalk along the adjacent parcel, so all the developer had to do here was preserve it or extend it flush with the existing right-of-way, yes? Apparently that’s too much to ask. Here’s the existing sidewalk to the west of the parcel, where it meets up with the curb cut and entrance to the strip mall: 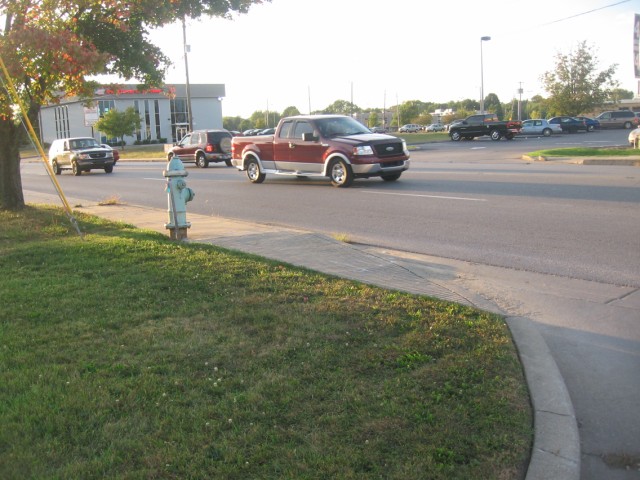 And here’s how that same sidewalk continues along Stop 11 Road: 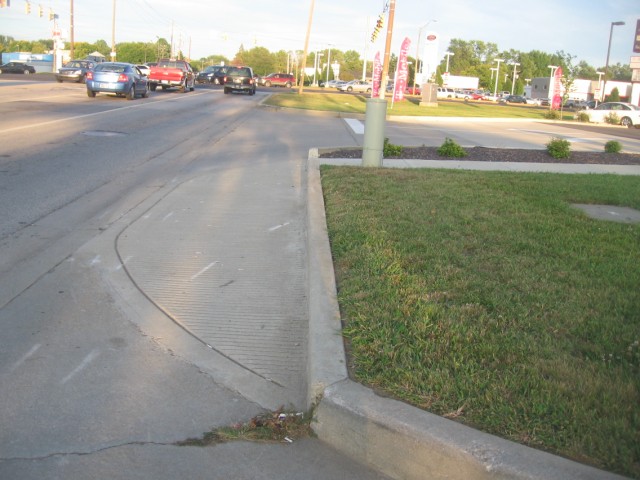 Instead of tracing the right-of-way all the way to the intersection in the distance, it makes a bizarre turn to the right, cutting a path into the parking lot that leads right to one of the tenants. 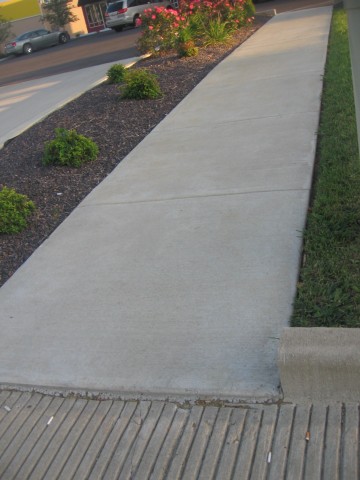 Here’s looking at that sidewalk from within the parking lot, in front of the Grand Traverse Pie Company: 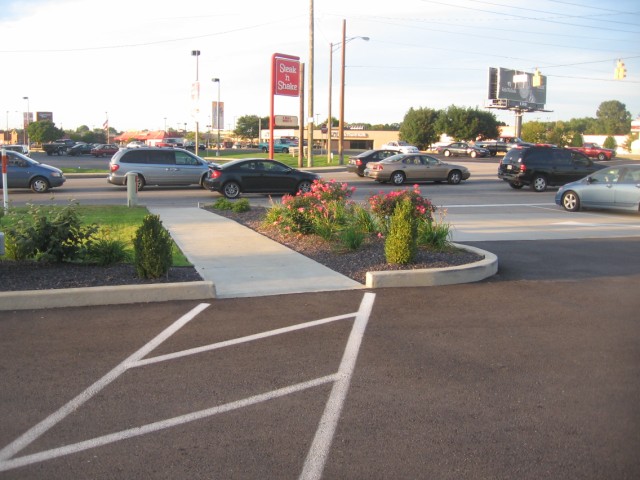 That’s nice and all, but why no sidewalk directly to the intersection of Stop 11 and U.S. 31? And what about the sidewalk along the U.S. 31 right-of-way? Yet again, a major oversight.

Presumably the Department of Metropolitan Development must grant permit approval by viewing a site plan before any new project breaks ground, and any redevelopment, major addition, or alteration should also come under its scrutiny. I grant that it is possible that some of the project might have been approved while the passage of the sidewalk ordinance was still pending. But this is highly unlikely, because the developers would have had no real incentive to build sidewalks prior to this amendment to what previous was a very weak sidewalk ordinance, and the sidewalk portions that they did create, however incomplete, do seem to abide by the standards of the code.

Of course most people would consider this to be splitting hairs; these are trivial concerns when the city’s unemployment rate hovers around eight percent and crime is nowhere near as low as it should be! After all, these are mere slivers of sidewalks that, because they generally fail to link to a broader network, will hardly ever be used. But these oversights to me are far more the fault of a City demonstrating that its regulations promoting pedestrianism have no teeth. According to the website linked above, the Metropolitan Development Commission wanted a balance between making the City more walkable, “while also taking into consideration the needs of developers for added flexibility in implementing the new requirements into their developments.” How does this translate specifically into the language of the ordinance? In nearly all amended sections of the city’s Revised Code, affecting nearly all zoning designations, the developer can choose between either i) constructing sidewalks; or ii) “Pursuant to a written agreement, a contribution in lieu of sidewalks shall be made to the City for the provision of sidewalks in Marion County. The amount shall be [$18 to $25] per linear foot of required sidewalk. The rate per linear foot shall be increased by [$.45 to $.60] annually beginning January 1, 2009.”

There’s the weasel wording. No doubt some developers did the math and realized the “contribution in lieu of sidewalks” costs less per linear foot than actually installing them. In other sections of the sidewalk amendment, this contribution is only intended to apply in circumstances where site conditions cause extreme difficulty in construction of sidewalks, such as “waterway crossings, significant elevation change, existing deep drainage swales in the right-of-way, side slope grades steeper than 3:1, and linear grade changes along the right-of-way line in excess of 7%.” None of these conditions visibly apply in the aforementioned examples. Does that mean that these developers were able to forge a “written agreement” in order to cut corners? If so, why did each of them find reason for at least a portion of a sidewalk but never bothered to fulfill the entire requirement? As I investigate this further, hopefully I will be able to provide a blog post to update. In the meantime, the pedestrian advocates of the city are stuck with another example of a weak regulatory environment which can only be based on fears that excessive regulation will scare development away because of onerous costs. But would these projects really move to the suburbs? The suburbs all have sidewalk ordinances as well, and most of them don’t hesitate to enforce them. Like the majority of my design criticisms, this isn’t a matter of aesthetics; basic functionality should be a prerequisite and this case, much more than the Canal Walk, is an egregious example where it is lacking.

PrevFaded paint can be a badge worn proudly.
Answering the question posed by stairs to nowhere.Next