Sometimes the most modest and unremarkable streetscape features can elicit subtly important results. A few weeks ago, I was driving through Mooresville, a small (population about 10,000) Indianapolis bedroom community, best known as the home town of folk hero/bank robber John Dillinger and, apparently, the pig from the Green Acres series. I was stopped close to the historic town center—which is quite small because most of Mooresville’s growth has occurred in the past twenty years through suburbanization—when I observed something distinctive about the intersection’s design: 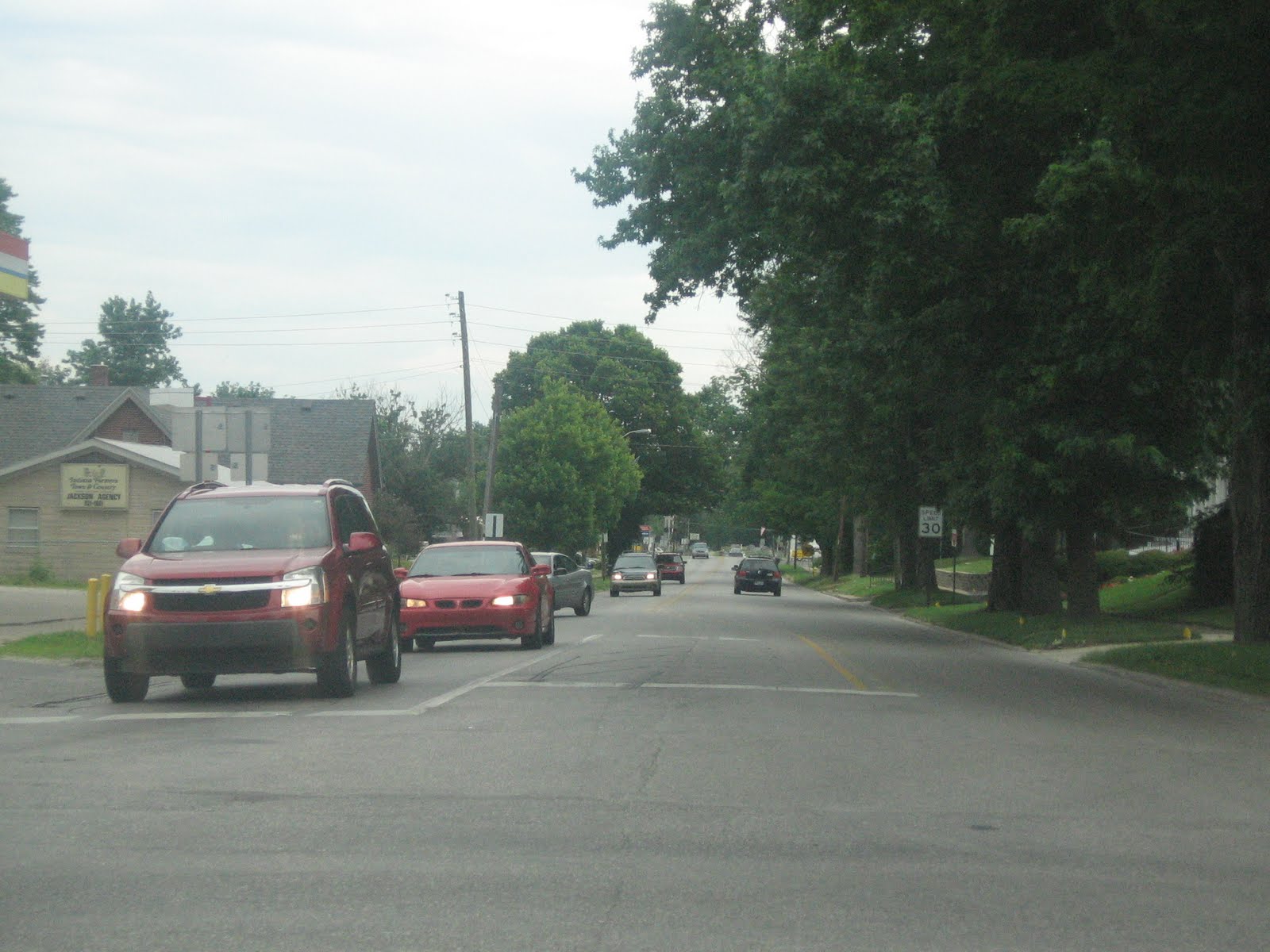 It’s not a feature I would have noticed until several months ago, when a former employer pointed it out to me. And my guess is that 99% of the motorists aren’t entirely aware of it either, even if the majority of them abide by it. From the red ellipses below, you can see what I’m trying to identify here: 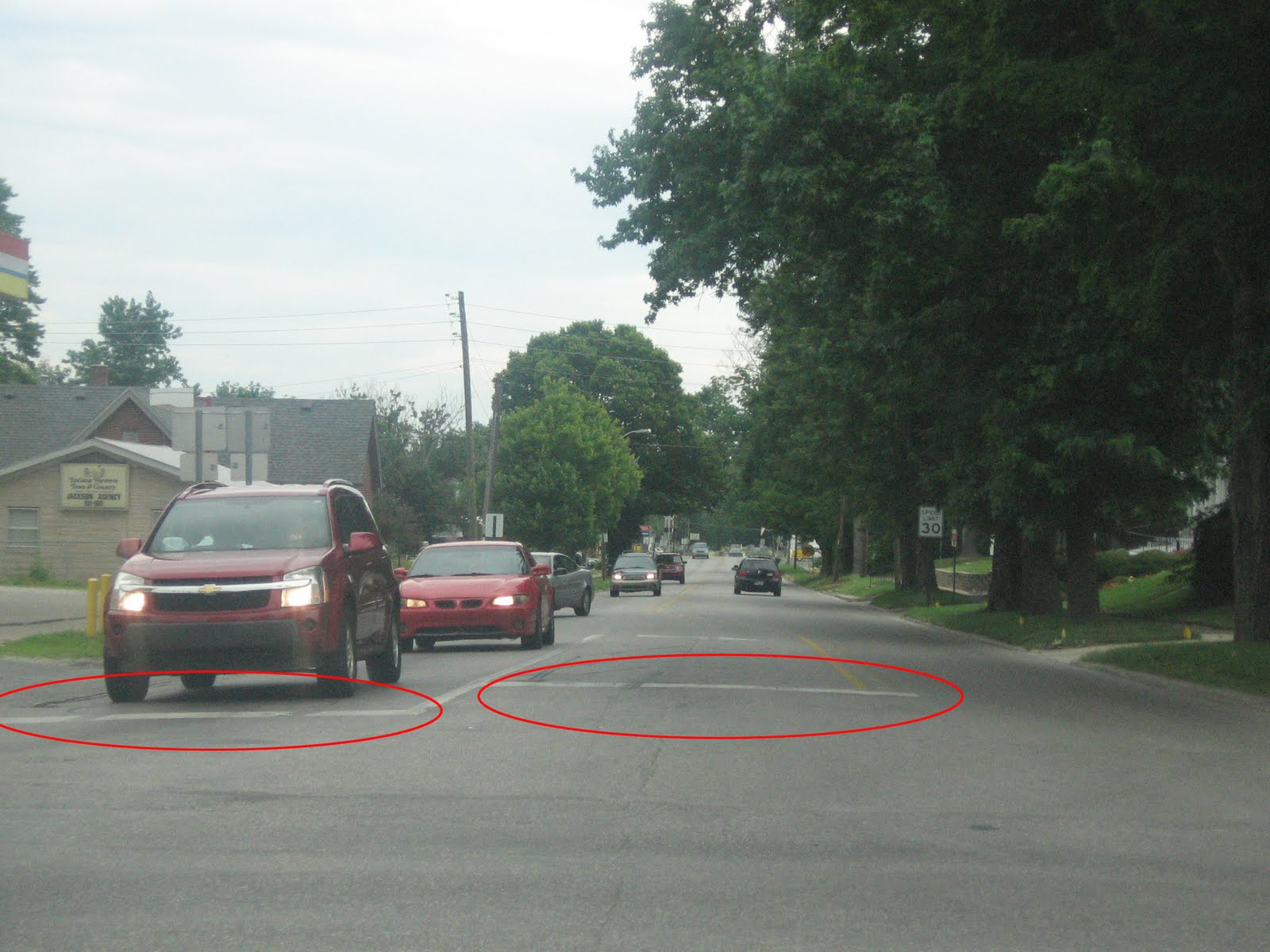 The stop bar is staggered, with the outer lane, closer to the curb, allowing cars to pull closer than the inner lane. Municipal public works offices have been quietly introducing the practice to intersections all across the country, and to my knowledge it hasn’t made much of a wave. It surreptitiously prompts the drivers in the inner lane—in Mooresville’s case, the left-turn lane—to stop more prematurely than the outer lane. Thus, drivers in the outer lane who are seeking to turn right on a red (legal in Indiana unless otherwise noted, as it is in most states) will have less of a visual barrier to oncoming traffic that might otherwise be created by a bulky SUV in the left-turn lane. Essentially it facilitates right turns on red.

This is useful to traffic flow on potentially congested intersections, and obviously what is good for traffic flow is not always conducive to pedestrian safety. If this were in another, more auto-centric area of Mooresville, one might expect the city leadership to promote traffic flow vigorously. But this is just blocks away from Mooresville’s Main Street, in its oldest residential district. The photo of this intersection suggests that it is sending a mixed message regarding pedestrian safety: the speed limit is 30, which is about the maximum speed for promoting true pedestrian comfort. Sidewalks exist on both sides of the street, as they should, but the right-of-way does not allow on-street parking, which typically operates as a buffer that further enhances the pedestrian environment. In addition, this intersection (the stoplight is not visible) does not have a painted crosswalk. And then there are those staggered stops, which facilitate right turns. Right turns, in fact, can pose the most profound danger to pedestrians because they transpire much more quickly than a left turn: they cover less ground, and it generally is not against the law. Gently curving curbs at an intersection promote a mild turning radius, making it even easier for cars to swoop into the right turn without slowing down a great degree. It appears that staggered stop bars, while not overtly threatening to pedestrians, certainly to not benefit them to any degree.

Are there streetscape features that can simultaneously benefit both pedestrians while expediting the flow of traffic? Among the few that easily comes to mind are the rapidly proliferating Walk/Don’tWalk signs that feature a countdown, informing pedestrians precisely when the light is about to turn green when they cross. While some would argue this imperiously urges pedestrians to hurry in an uninviting manner, a flashing “don’t walk’ without a countdown isn’t particularly friendly either. But at least the countdown informs pedestrians precisely how long they have, impelling them to make a more informed decision about crossing, and reducing the likelihood that they’ll be stranded in the middle of the street when the light turns green. By that measure, it also helps traffic that is less likely to have to dawdle because of scurrying pedestrians.

I am not particularly chagrinned by the staggered stop here in Mooresville and don’t mean to criticize it. By most metrics it is a smart feature for allowing drivers to make safer decisions in relation to other motorists. I don’t believe, however, that it should be applied at every intersection with equal regard. It would be wise for traffic engineers to be mindful of where the utility of staggered stops will outweigh the potentially compromised safety of pedestrians—which isn’t often in an urbanized area. But staggered stops along a busy six lane highway could work just as well, and if the intersection stands little chance of being traversed by many pedestrians, it may prove quite effective—and almost no drivers will notice how it has altered their behavior for improved efficiency.

PrevWhen urban revitalization is nothing more than a façade.
Ballot stuffing on public services?Next

3 thoughts on “Making right turns a bit easier—is it always a good thing?”